Starting this Thursday, if you’re on iOS, you can share the tweet of the latest amazing video, funny post, or touching story in one of your Snap. Twitter has decided to facilitate the conversation between the networks. 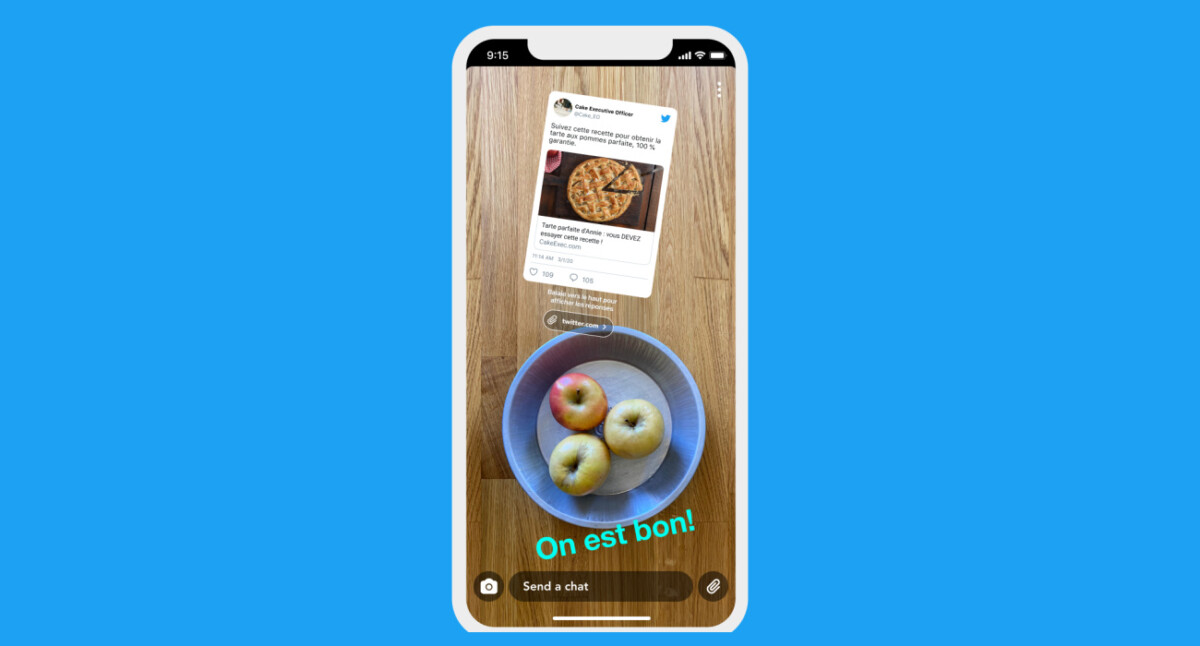 Network networks. This is a bit like what Facebook does with its in-house services (Instagram, Facebook, Messenger, WhatsApp) which are becoming more and more interconnected to the point of even possibly merging their messaging.

At Twitter, we play interconnection differently by seeking to extend its visibility. And for this, the social network with the little bird wants to find users who are not necessarily committed to its cause. And what better than Snapchat and Instagram for that?

Starting this Thursday, Twitter users on iOS will be able to share tweets on Snapchat. If you are on Android, you will have to wait a little longer. No need to capture a post and then share it in Snap or in a Story, a function that recently inspired Twitter Fleets. The handling will be much easier and the result much better.

It will thus be possible to display a message spotted on Twitter by sharing it from the latter. All the creation options specific to Snapchat will also be usable, like the Camera or the filters, to improve the prominence of the tweet in the Story. 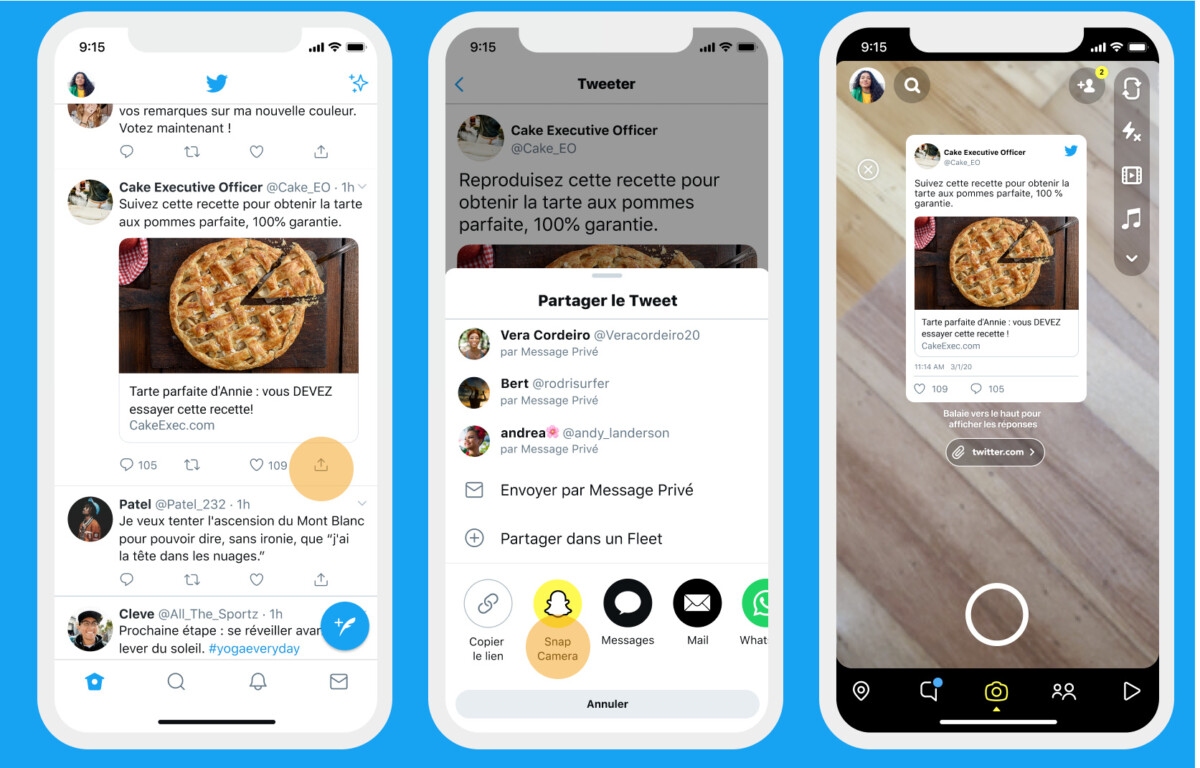 « The conversation shouldn’t be limited to one place – it should be able to be where you want to develop it.“, Explains one at Twitter which recognizes that this must also make it possible to” connect more people to the conversations which take place on Twitter. And this is particularly well received from the firm of Jack Dorsey. Because it is a safe bet that the transfer of users will be done more from Snapchat to Twitter than the reverse.

According to figures communicated by Snapchat, more than one in two users is under 25 years old. At Twitter, 56% of subscribers are between 25 and 49 years old while the 13-17 year old age group, very strong among the little ghost, does not even concern one user in 10. Allow the sharing of tweet that automatically refers to the original tweet when you click on the Snap is a good strategy to get new followers.

On Twitter, younger users tend to be interested in funny videos or hot facts. This gateway between networks will allow them to share them wherever their friends are. And it will soon be possible to do it on an even larger scale, on other platforms whose users are not necessarily the same as on Twitter. What enrich the conversation and interactions between users more and more need, one of the objectives of the platform.

After Snapchat, the San Francisco firm is also opening up to Instagram. Very soon, it will also be possible to make a tweet appear in his Stories in the same way. The function will be deployed to a first sample of users on iOS in the coming days. With the focus on video and imagery for some time, Twitter has a strong case for Instagram users.

Update Twitter and possibly Snapchat on iOS (only for now)

If you are connected to the Snapchat app, it opens on the creation of a Snap Attention, if you were in the middle of a creation, it will be overwritten. 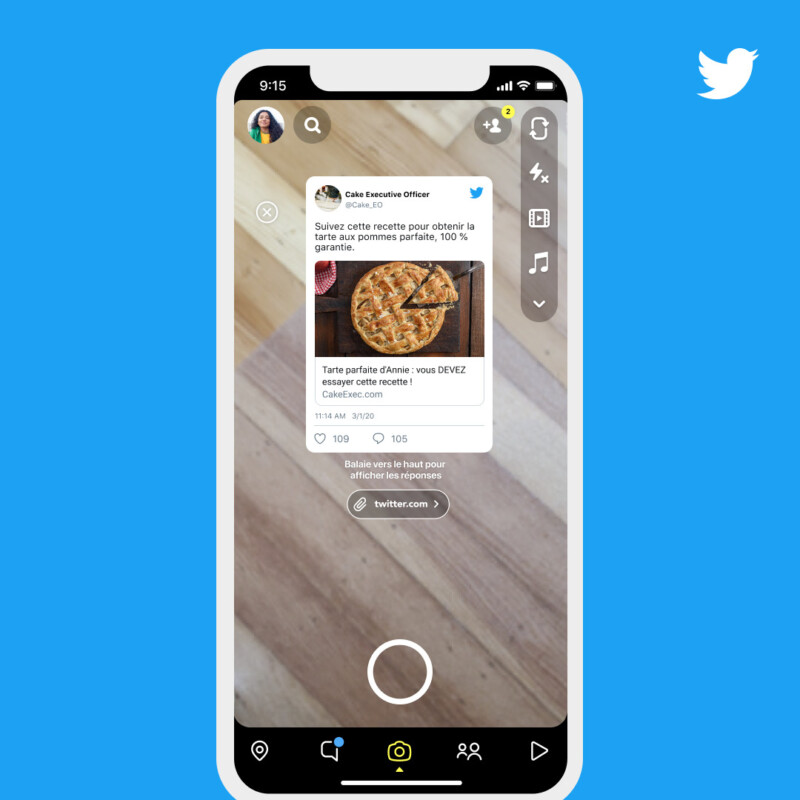 The camera opens on Snapchat and the tweet becomes a sticker

By clicking on the tweet that appears as a sticker, Snapchatters will be sent to Twitter to read the responses to the initial tweet and see the different interactions.

For Instagram Stories on iOS, the process will be exactly the same. But we will have to wait before a wider deployment. 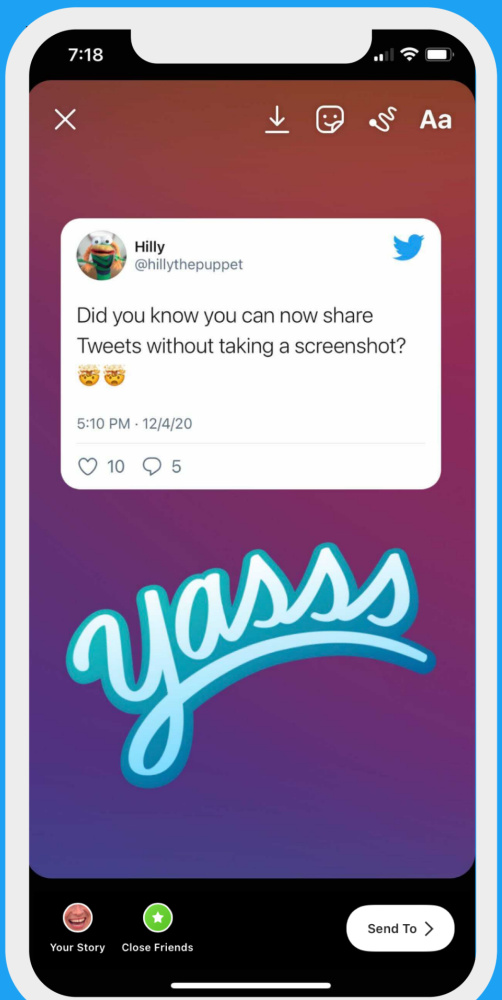