For the end of year celebrations, Lenovo and Fnac have worked on a really smart pack including a Lenovo Tab M10 FHD Plus touchscreen tablet associated with a docking station and a protective shell. Clever, because this docking station turns the tablet into an assistant as soon as you put it on it.

Making an Android tablet even more useful in a household, this is what Lenovo proposes to do with this pack including the Tab M10 FHD Plus tablet with a protective shell and a smart docking station. When this 10.3-inch tablet with 128 GB of storage space is coupled to its docking station, it automatically activates Google Assistant’s Ambient Mode to turn into a real hub boosted by Google’s artificial intelligence, which then makes it possible to control it by voice and display a lot of practical information. This pack is offered at a price of 249.99 euros at Fnac.

More versatility with a docking station

The docking station delivered in this pack will adapt the tablet to various uses and make it a truly versatile device. Connected to this dock in the living room, the Lenovo Tab M10 FHD Plus turns into a family hub with the Google Assistant. More specifically, it has Google’s Ambient mode.

Concretely, this turns the tablet into a real virtual assistant, like a Google Nest Mini, for example. Via a voice command, it is for example possible to obtain the traffic status or the weather conditions. The tablet can also be transformed into a digital photo frame but also be used to control the music played on the speakers paired with Bluetooth. 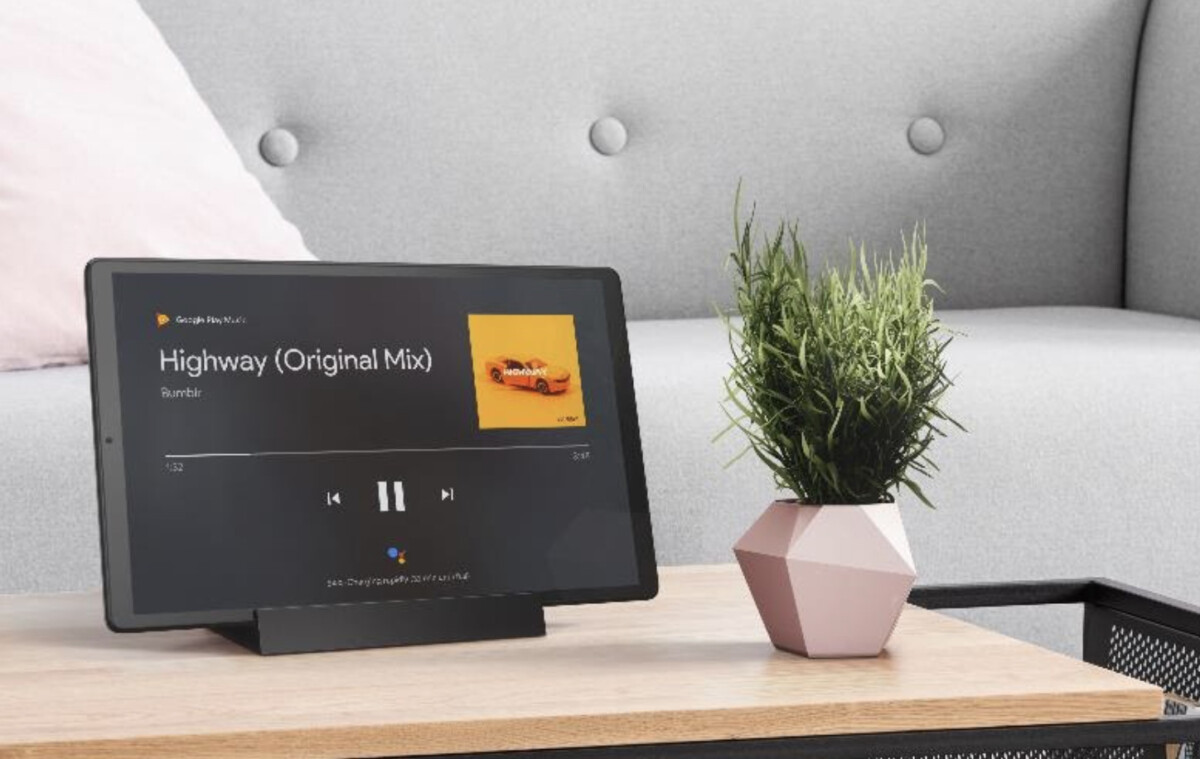 If you have connected objects compatible with the Google Assistant, such as bulbs or sockets, you will also be able to configure them within the Google Home app and then control them by voice.

However, the versatility doesn’t end there. When the tablet is connected to the docking station, it is automatically recharged. Slightly inclined, it allows, placed in an office, to perform videoconferencing sessions for example. It has two microphones for this. Installed in the kitchen, the tablet makes it easy to consult recipes. Positioned in front of your indoor bike or just your sofa, it offers an adequate angle for streaming video playback.

With Kids Space, a tablet that can be safely put in children’s hands

On a 10.3-inch screen, we immediately think of watching videos, but also of downloading a few games. The Lenovo Tab M10 FHD Plus tablet is the first to integrate Google’s Kids Space functionality. When this option is activated, the tablet switches to “child” mode. It displays a simplified interface and educational (books, videos) or fun content suitable for children. 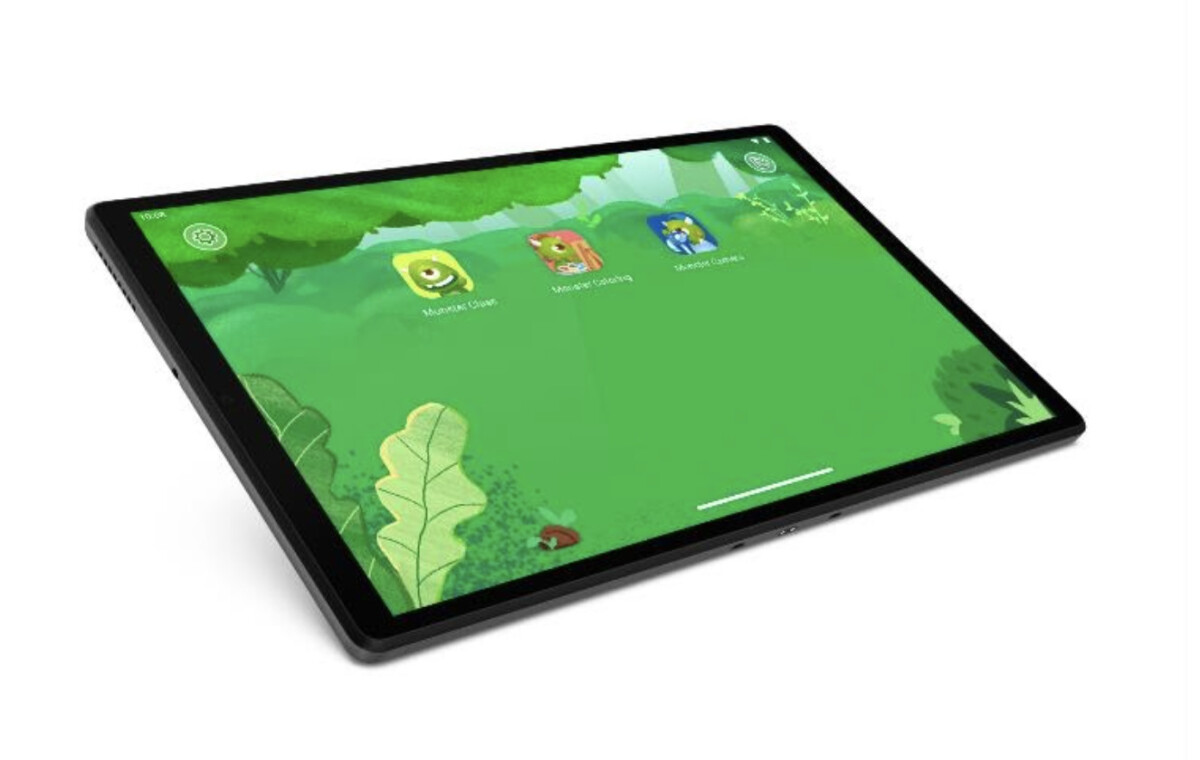 For their part, parents can of course control the use of the tablet directly from their smartphones. It is then possible to limit the screen time, to know what your children are watching, but also to determine if they are correctly installed thanks to the state of the sensors of the tablet.

A tablet designed for multimedia

With its large 10.3-inch IPS display, the Tab M10 FHD Plus offers a standard size suitable for playing videos while remaining easily transportable from room to room. We also find a rather immersive experience since the screen-to-display ratio is 87%. With its definition of 1920 x 1200 pixels, the Tab M10 FHD Plus tablet is able to read Full HD content. The screen also offers very good brightness, as long as it is not used in direct sunlight.

The device is powered by the Mediatek Helio P22T SoC, an eight-core chip supported by 4 GB of RAM. The latter provides the tablet with enough power for standard uses such as streaming videos or music, or surfing sessions. It will also allow you to run multiple games and take full advantage of Android features. However, it is not suitable for greedy 3D games, such as Fortnite or Call of Duty : Mobile.

The rest of its spec sheet is well balanced. There is thus a storage space of 128 GB, which can be extended using a microSD card. Its 5000 mAh battery provides an autonomy of 7 hours. Regarding the photo part, the main sensor on the back is 8 megapixels with autofocus, which is always handy for taking a few photos. And for video conferencing, the front camera is 5 megapixels.

Finally, Lenovo has placed two speakers on this tablet providing support for Dolby ATMOS. This technology aims to reproduce a sound surround for a better immersion within a movie or a game. Incidentally, there is also a 3.5 mm jack port on the left edge of the tablet. 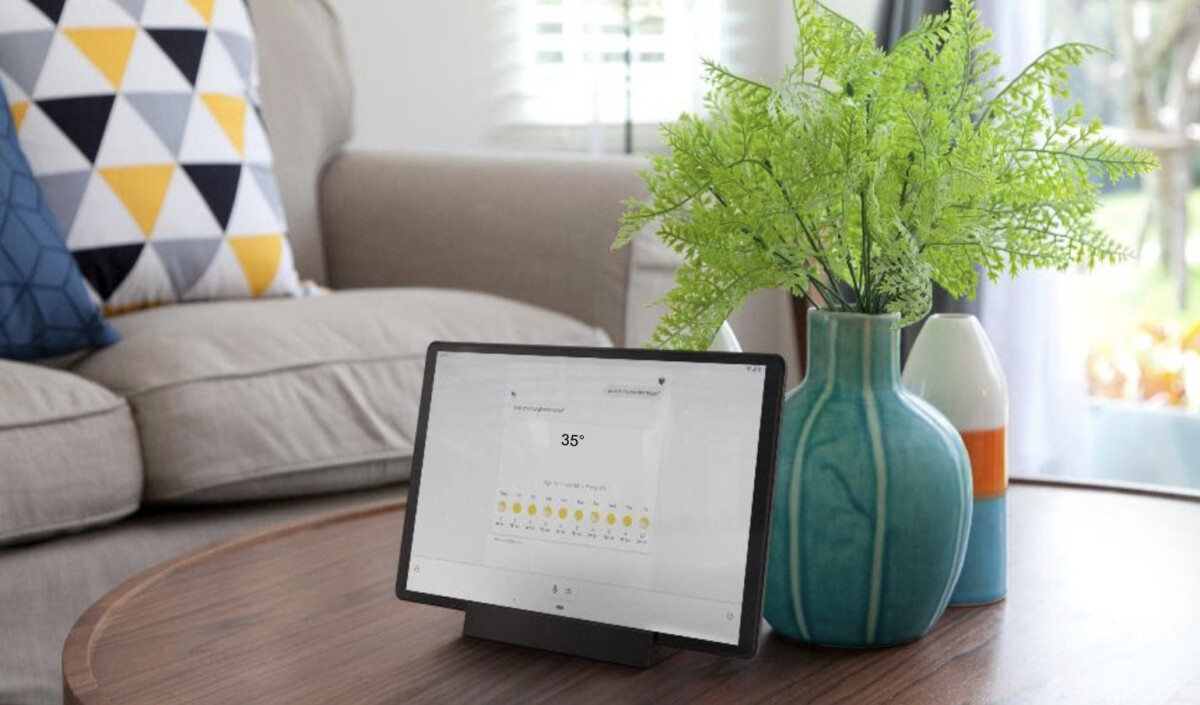 The pack including the Tab M10 FHD Plus tablet, the docking station and the protective shell is currently offered on the Fnac website at a price of 219.99 euros instead of 249.99 euros.