The GeForce RTX 3070 and RTX 3080 represent the heart of Nvidia’s RTX 3000 range. Which of the two graphics cards should you choose for your PC? Answer with this comparison. 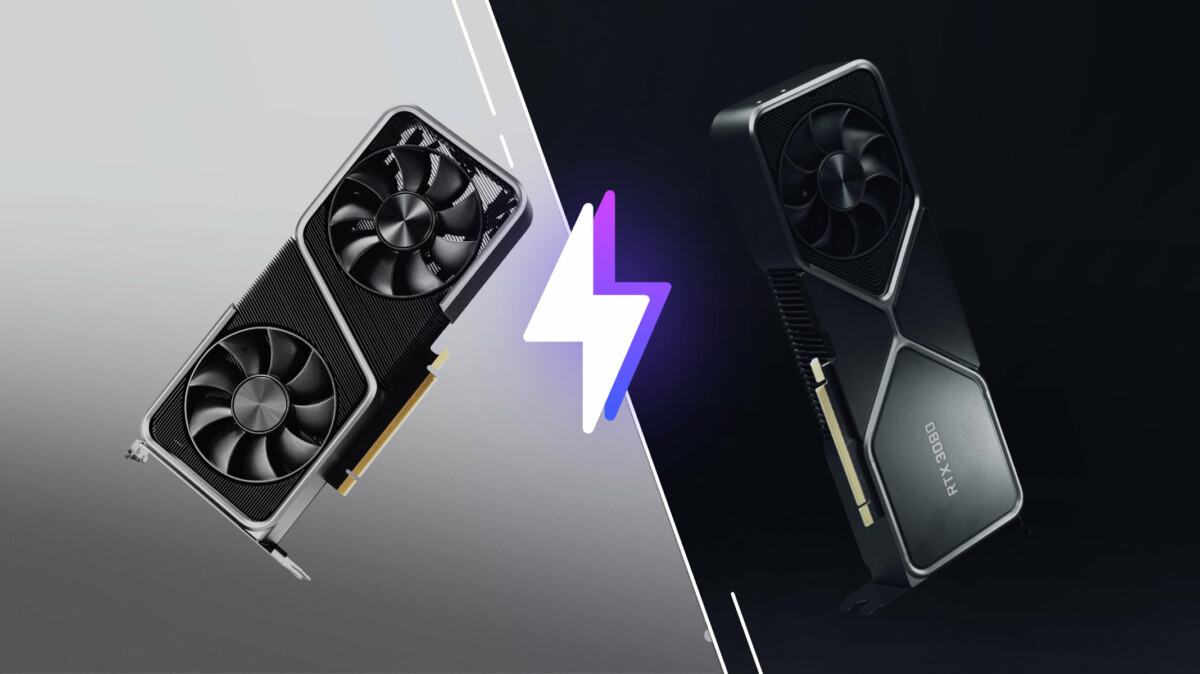 Nvidia launched this year its brand new generation of graphics cards based on Ampere: the RTX 3000. At the heart of this range, we find the RTX 3070 and the RTX 3080. On paper, 200 euros difference between the two graphics cards, but for what differences at stake? How to choose the best graphics card for your PC? This is what we will see.

The two models we tested are Founders Edition, manufactured and marketed directly by Nvidia under its own brand. We were impressed with the build quality achieved on these new products. The brand’s teams have worked very well and the Founders Edition clearly stands out from the rest of the market in the care taken, in particular to the cooling system.

This difference in size between the two cards comes mainly from the cooling system. The RTX 3080 uses a large heatsink with one fan on each side, allowing air to flow directly through the heatsink, where the RTX 3070 uses a more conventional system with two fans on the same side, designed to extract heat from the heat sink. radiator.

The connections of the two cards are identical. First, the new 8-pin Nvidia power port, to which you can connect the supplied adapter. In the case of the RTX 3080, it will be necessary to connect two PCI-E cables to it, while only one is enough for the RTX 3070. For video, we are entitled to three DisplayPort 1.4 ports and one HDMI 2.1 port. This is what is currently best and can handle the highest definitions on the market (3840 x 2160 pixels at 120 Hz with 10-bit HDR).

Performance: up to 20% difference

This difference in performance makes it possible to play more comfortably in 4K with the parameters set fully on an RTX 3080, where it will be necessary to compromise on the graphics settings with an RTX 3070.

In applications using ray tracing, the RTX 3080 once again shows a nice performance gap over a high render definition. This difference allows for example to run Watch Dogs Legion in 4K at more than 60 frames per second on the RTX 3080 with the parameters set to “very high” and DLSS Performance mode.

What screen will you be playing on?

Obviously, the RTX 3080 performs better than the RTX 3070. After all, we are talking about two cards from the same generation of graphics cards and from the same manufacturer. It remains to be seen whether this power gap is worth the price difference and whether it will be useful for your PC.

From our testing, we can tell that the RTX 3070 is more than adequate if you’re playing at 2560 x 1440 QHD definition or below. Once we go beyond this definition, we will instead have to turn to the RTX 3080 if we want to make no concessions. Thanks to DLSS technology, the RTX 3070 is however not completely out of competition and is able to run games such as Watch Dogs Legion or Control in good conditions.

As we have said, the RTX 3080 is larger than its sister to have a larger cooling system. More cooling and more graphics power often go hand in hand with higher power consumption. This is the case here since an RTX 3080 consumes up to 320 watts, against only 220 watts for the RTX 3070. 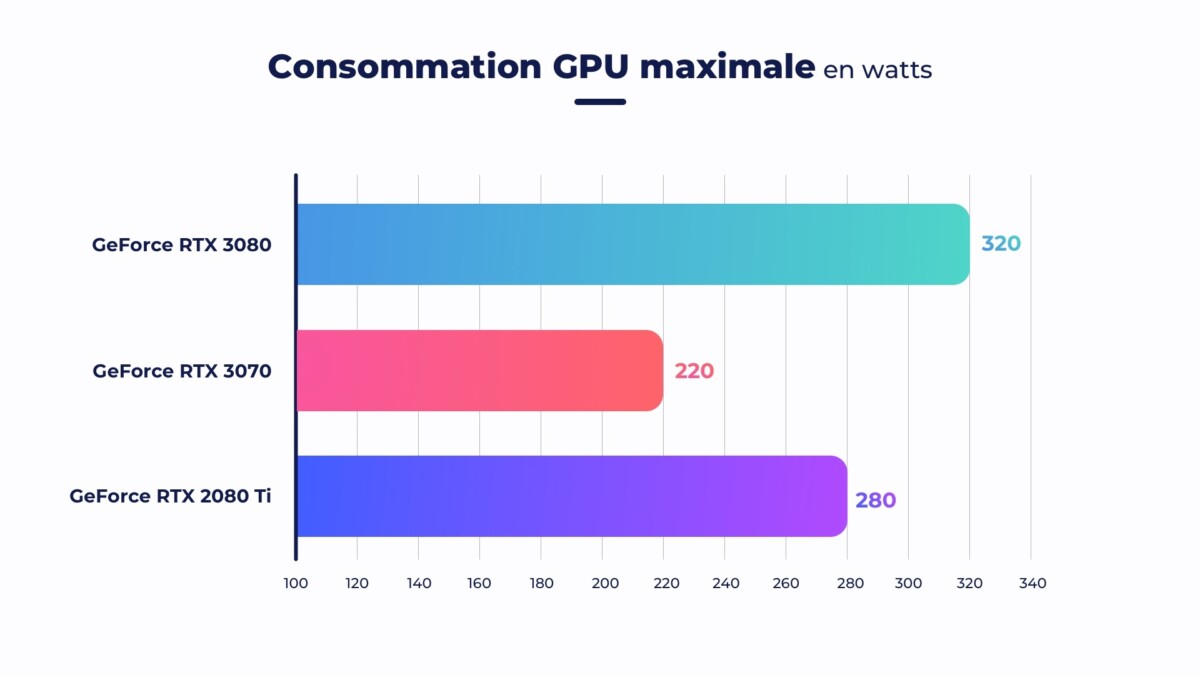 Between its more compact design and lower consumption, the RTX 3070 is easier to integrate into PCs.

The same excellent level of cooling

When it comes to heat dissipation, our two cards do a nice draw with a maximum temperature of 71 to 72 degrees Celsius. This is a little higher than the previous generation of Nvidia card, but still reasonable for graphics cards at this power level. 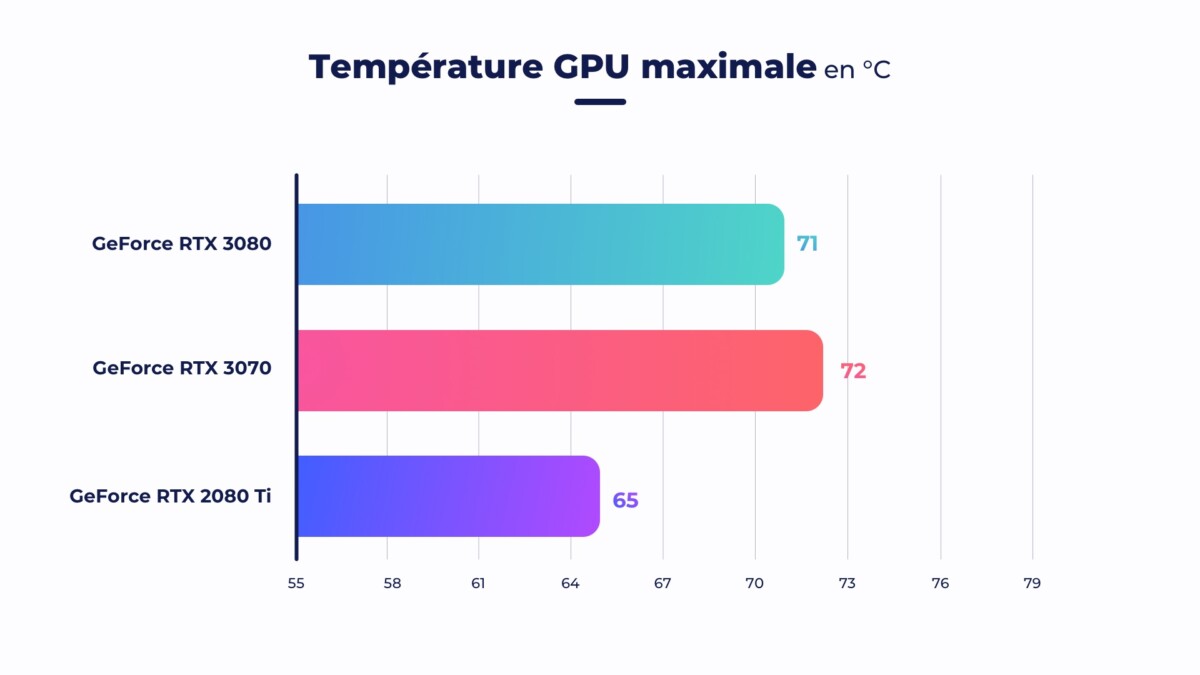 Either way, the cards also remain extremely quiet, even on the most demanding games. They were really flawless on this point during our tests. Remember that we have tested the Founders models from Nvidia and that the other manufacturers offer other cooling systems that may give different results.

Which graphics card to choose?

Between an RTX 3070 and an RTX 3080, which graphics card should you choose? Obviously this will depend first on your budget, but beyond this criterion, it will depend on the rest of your configuration and your screen. If you’re playing at 1920 x 1080 or QHD 2560 x 1440 and aren’t going to switch screens in the next few years, we recommend that you upgrade to a GeForce RTX 3070. It will be more than powerful enough to run. all of today’s games, but also new generation games, even if it means adjusting a few parameters. The card can also count on its management of DLSS technology to boost performance in compatible titles, and there are more and more of them.

If your budget allows it, the RTX 3080 offers a real power gap that will allow you to play on a 4K screen, or play longer in the future without compromising on graphics settings.

To go further, you can find our complete tests of the two graphics cards:

To date, the problem with these two cards remains their very low availability, which tends to drive up prices at merchants.