Have you ever wanted to fly a drone? Whether for beginners or experts, here is our selection of the best drones in 2020.

Much like action cameras, the drone market has calmed down after a few hectic years. Despite some attempts on the part of Parrot or Xiaomi, DJI has established itself as the benchmark for consumer drone.

And we have to admit that the Chinese reigns as an enlightened despot in the category. Not only is the software and material design of its products impeccable, but the after-sales service is very easy and access to spare parts is easy.

Because yes, buying a drone also means taking the risk of damaging it in a more or less spectacular way. DJI also offers an annual guarantee DJI Care Refresh offering up to two replacements per year. Its price is relatively low (49 euros per year for a Mini 2) and we strongly recommend that you subscribe to it.

A quick overview of the best drones of the moment, with something to satisfy both beginners and enlightened amateurs.

The Mavic Air is located halfway between the DJI Mavic Mini and the DJI Mavic Pro which we will discuss again below. This second version released in May 2020 includes a sensor capable of filming in 4K HDR at 30 frames per second (fps), or without HDR at 60 fps. It can also go up to 240 fps in Full HD for slow motion effects. Mounted on a stabilized 3-axis gimbal, the sensor, similar to what can be found on a high-end 2020 smartphone. In other words, overall the picture is excellent, but not perfect. 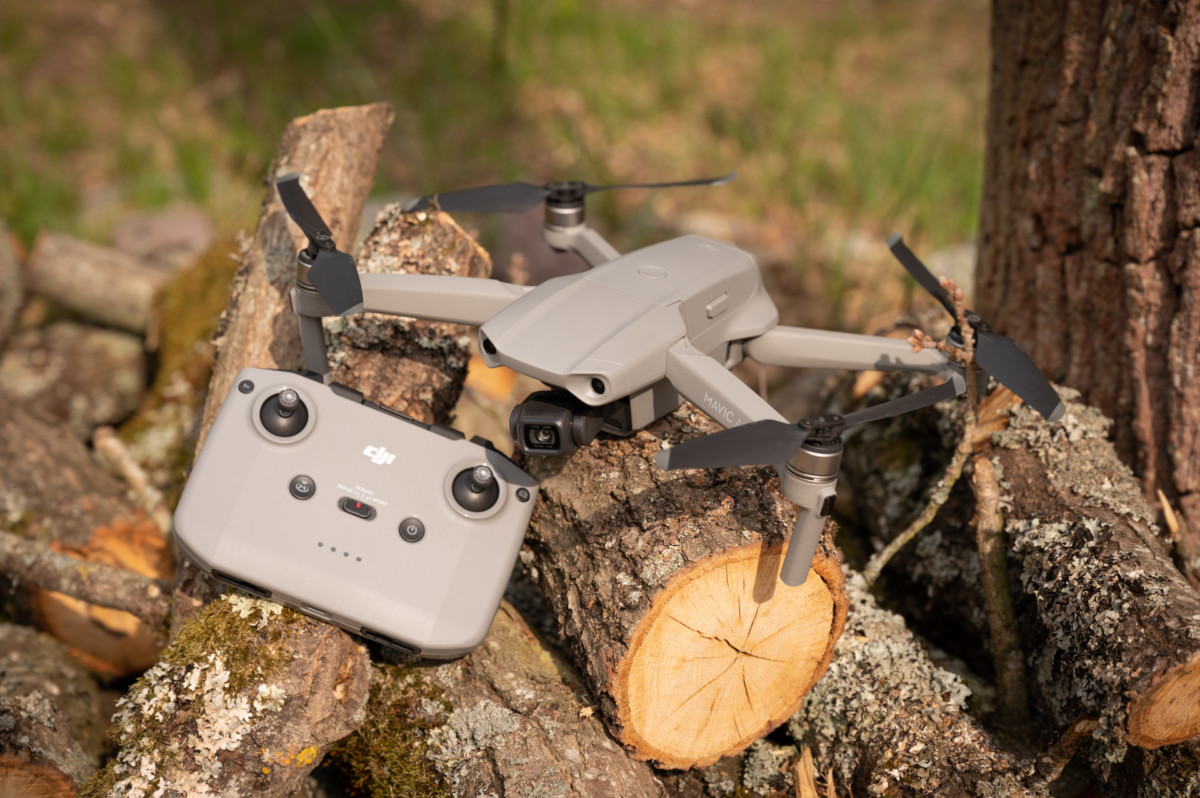 We will also appreciate its performance in flight. In addition to the “Tripod” driving modes, you shoot smoothly and “Normal”, you have the possibility of reaching a speed of 68 km / h in sport mode. Mode to be reserved for experienced pilots, as the obstacle sensors are disabled in this mode. This is precisely the other novelty on this model: the arrival of front, rear and downward obstacle sensors. On the other hand, the side and upward sensors are absent. Also note that this Air 2 is more robust and should therefore withstand the most common crashes. Various automatic flight modes are also involved.

Finally, we salute the efforts on the battery with 25 minutes of effective flight time according to our tests. The remote control has also been adjusted for more convenience, it now mainly incorporates a battery to avoid draining the phone too quickly. Latest innovation: it now uses the home radio link called OcuSync 2.0 for a theoretical range of 6 km. It will undoubtedly be difficult to fully exploit it due to French legislation requiring the device to be constantly on view, but this should strengthen the signal strength through obstacles, even at low range.

In the end, the Mavic Air 2 is arguably the best consumer drone. This is our recommendation. To find out more, you can consult our test of the Mavic Air 2.

Why choose the Mavic Air 2?

The Mavic Air 2 is available at a suggested price of 849 euros.

DJI Mavic 2: the top of the range

As for the model DJI Mavic 2 Pro, it incorporates a one-inch sensor to capture 20 megapixel shots. It doesn’t offer a zoom, but the camera, designed in partnership with Hasselblad, allows you to adjust the focal aperture between f / 2.8 and f / 11. It also allows capturing 4K videos with a 10-bit color profile. 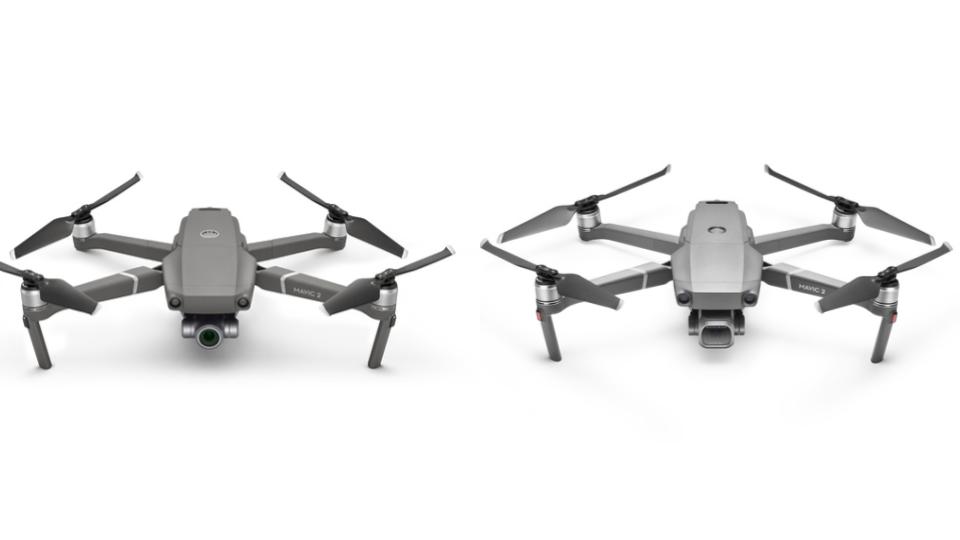 The new DJI Mavic 2 allows four riding modes: free, circle, lock course and waypoint. It can go up to a speed of 72 kilometers per hour and incorporates eight sensors to analyze the surroundings and avoid obstacles. In terms of autonomy, DJI promises up to 31 minutes of flight without interruption. Finally, for the management of photos and videos, the drone offers an internal storage of 8 GB expandable via MicroSD up to 128 GB.

Why do we recommend the Mavic 2 Pro or Zoom?

Released a year ago, the Mavic Mini was a real favorite thanks to its ease of use and its ultra compact size. If this second generation keeps a form-factor almost identical, under the hood that things change, and not a little! The transmission part is completely revised, which increases the control range by 150%. 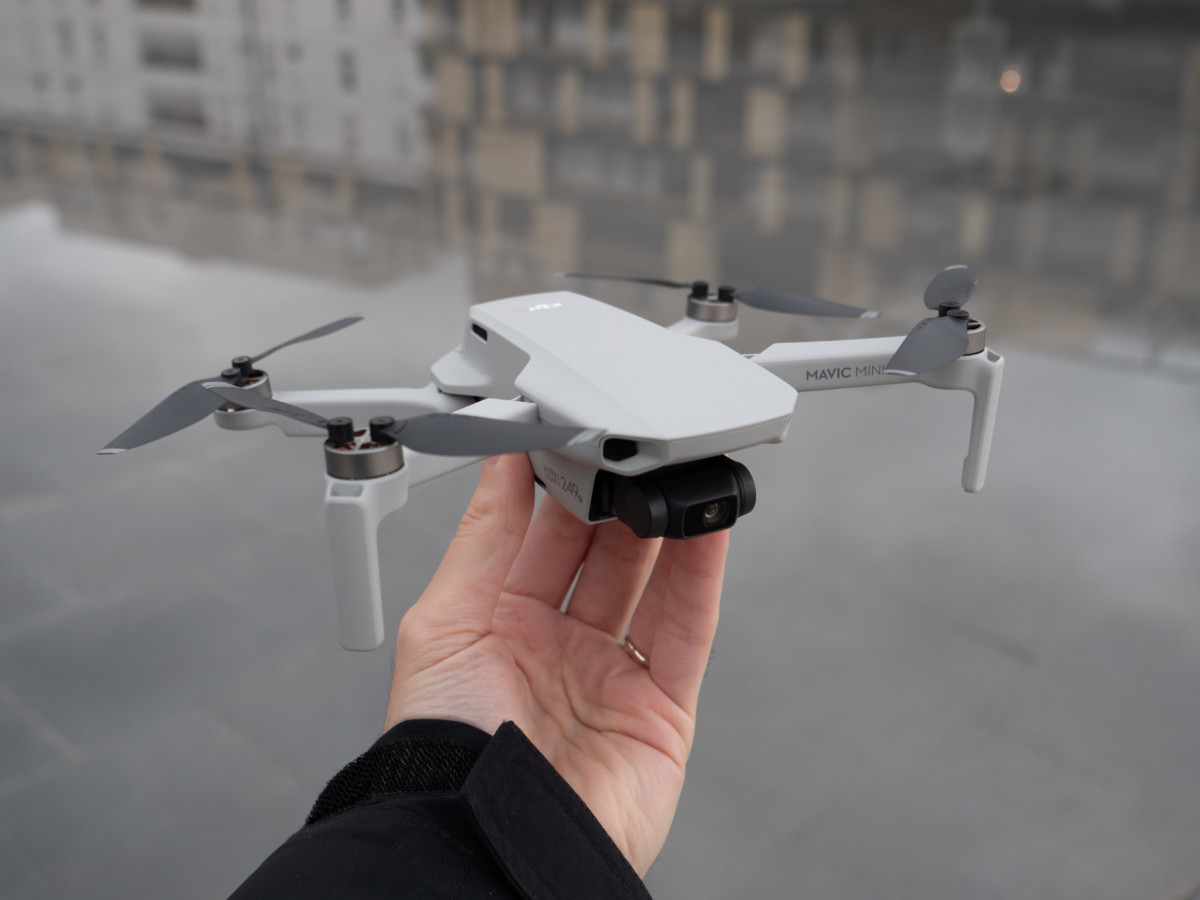 The engines are also entitled to a boost, with a maximum speed which increases by 20 to 30% depending on the modes selected. Be careful though, unlike its big brothers it does not have side obstacle sensors. This point aside, we are entitled to all the refinements of the DJI app in terms of geofencing or automatic return home. DJI offers here a drone both cut for beginners, but with the technical capabilities to create high quality images.

If you want to know more about the DJI Mavic Mini 2, do not hesitate to consult our review.

Why choose the DJI Mavic Mini?

The DJI Ryze Tello is a drone specially dedicated to beginners and a young audience. Indeed, the drone is light (80 grams), it fits in the hand (9.80 x 9.25 x 4.10 cm) and it offers an educational side, it can be programmed with Scratch, an accessible coding system to children. 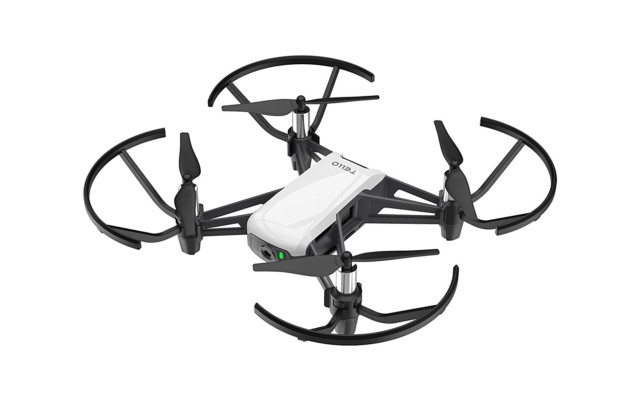 It has a 5 megapixel camera, capable of filming in 720p 30 fps, a battery life of 13 minutes, a maximum speed of 8 meters per second and a range of 100 meters maximum. It incorporates a number of features such as automatic take-off and landing and performing tricks like flips.

Why choose the DJI Ryze Tello?

He is available for around 100 euros.

What are the prerequisites for piloting my drone?

If your drone weighs less than 800 grams, you don’t have to take an online test to exercise their passion. Above, drones must be registered on the platform AlphaTango, and online training will need to be completed to fly legally. It is accessible free of charge on the platform which issues a certificate valid for 5 years to always be carried with you, under penalty of being sanctioned. Note that some fairly large public drones are concerned, such as the Mavic 2 Pro.

Where can I fly my drone?

To put it simply, you mainly have the right to fly within the limits of your private land, and outside the prohibited zones indicated on the Geoportail site. Flying over built-up areas is obviously strictly prohibited, as is overflight of so-called sensitive sites such as military land or airports. The surrounding areas are also limited to certain altitudes ranging from 50 to 150 meters. In all cases, it is forbidden to exceed 150 meters in altitude.

What are the other drone piloting bans?

There are about ten prohibitions or good practices summarized in a good practice guide. This is generally common sense: prohibiting flying over people, keeping safe distances and respecting the privacy of the neighborhood. It is also forbidden to fly at night, even if the drone has light devices. You must also keep the sight device at all times. First-person piloting (FPV) is possible under certain circumstances, including the presence of a “co-pilot”.

Now that you are comfortable with the legislation in place, you will be able to choose a drone according to your needs and your budget. If this is your first drone, do not hesitate to try a beginner’s model to understand the basics of piloting and then invest in a more efficient drone.