As expected, the French government has published the TousAntiCovid application in the Apple and Google app stores. This takes over from StopCovid

Earlier this month, Prime Minister Jean Castex announced that the government was planning a new version of its StopCovid application. Here it is now available for download on iOS and Android.

With 2.6 million downloads in total, the StopCovid app is a failure. Or, to use the recent words of the President of the Republic, ” it did not work “. By way of comparison, across the Channel, the British version is installed on 16 million smartphones and even on 18 million devices across the Rhine.

On October 14, during a television interview, Emmanuel Macron unveiled the new name of this application: TousAntiCovid. More than an update, it is therefore a question of starting again on new and more relevant bases. TousAntiCovid is the result of work bringing together Inria, ANSSI, Capgemini, Dassaul Systèmes, but also Orange, Withings, Lunabee Studio and Santé Publique France.

However, the principle remains the same: the application uses the smartphone’s Bluetooth to determine whether we have remained in contact with a person who has himself been potentially infected. Note, however, that the time required for proximity between two people remains unchanged: 15 minutes. For more efficiency, the Secretary of State for digital Cédric O would have preferred to see this time reduced to 5 minutes.

In the event of risky exposure, the application suggests finding the nearest test laboratory by redirecting the user to the site sante.fr. We also find the key figures of the day as well as the latest official news published by the government.

Note that the application does not (yet?) Integrate local information specific to a city, department or region. 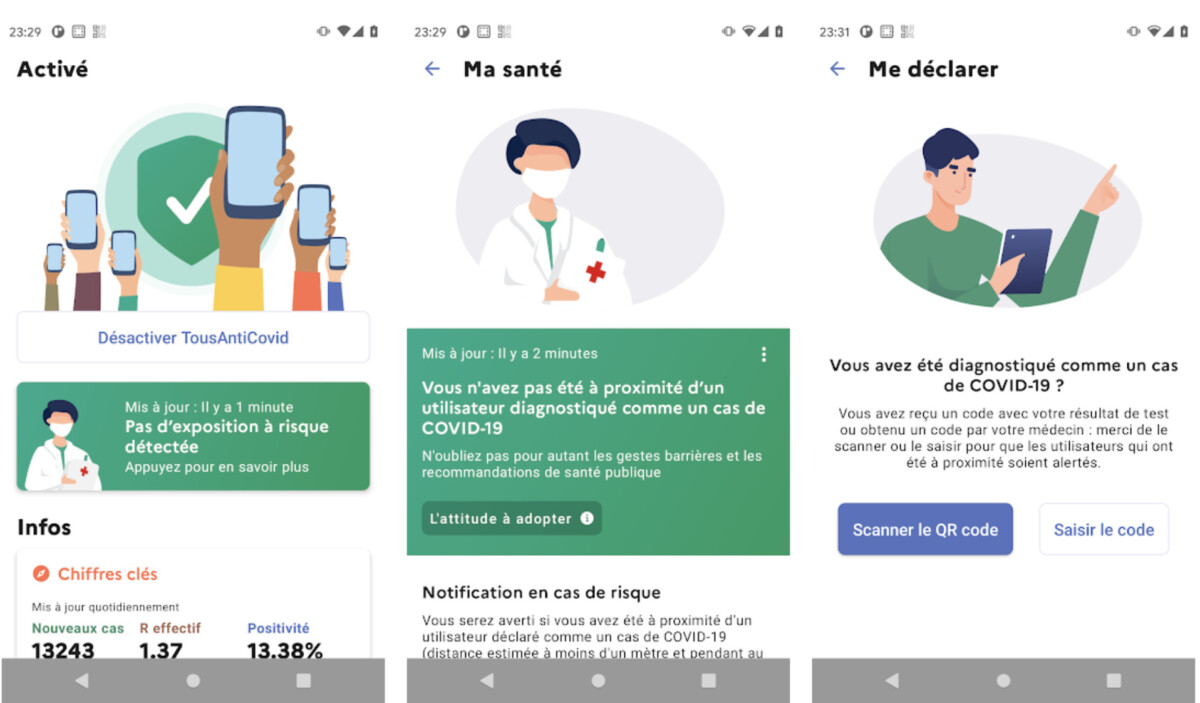 TousAntiCovid only uses your phone’s Bluetooth. Your geolocation data is neither recorded nor exchanged. Bluetooth is used to obtain an estimate, based on a statistical model, of the proximity between two phones.

It is also specified that anonymous data is only returned to the servers of the Ministry of Solidarity and Health in the event of a positive diagnosis. They will be used in particular to warn other users if they are identified as a contact case.

From the application, the user can remotely erase all data on the server. It is also possible to deactivate the application completely. Note, however, that President Emmanuel Macron suggested that bars and restaurants might have to ask customers to activate the device before entering their establishment.