Windows 10 updates follow one another and incorporate new functions that are often very practical, but not always put forward by Microsoft. Here are our top tips and tricks for Windows 10. 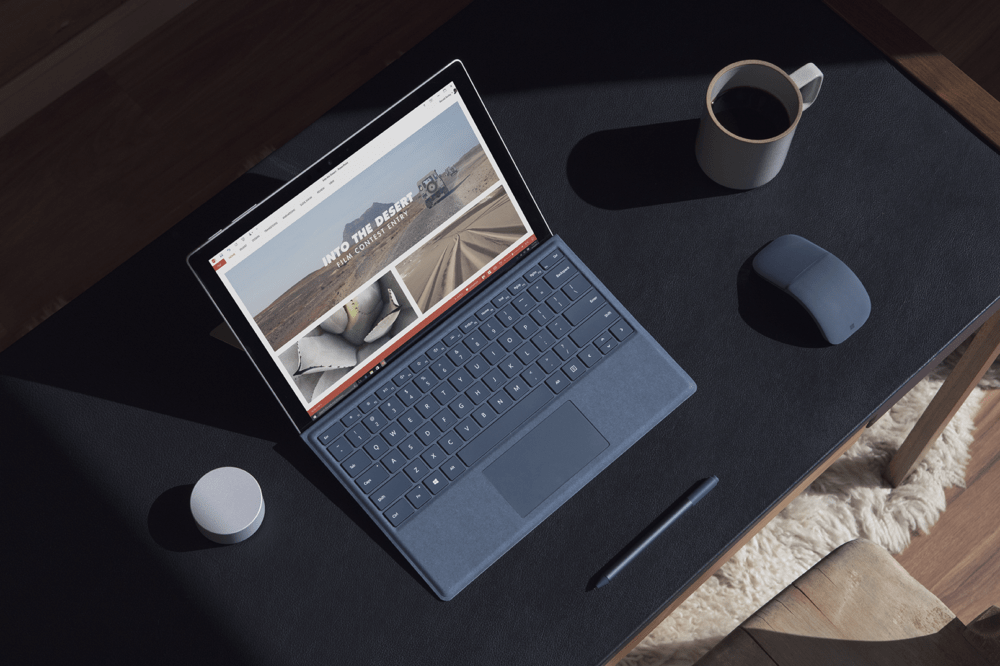 Let’s be honest, new things like the arrival of mixed reality in Windows 10 on which Microsoft communicates a lot do not really interest the majority of users. They are very important, and allow Microsoft to be present in new developing markets, but they hide other novelties, less impressive, but often more useful on a daily basis. We’ve put together a selection here.

Captures part of its screen, it is a function now common on our smartphones and present for a long time in Windows. So far, the ” Impr. screen »Of the keyboard only allowed to make a complete capture of the display and add it to the clipboard (It was then generally necessary to do a” paste “in Paint to save the capture). Since the October 2018 update for Windows 10, Microsoft has offered a new tool: “screenshots and sketches”.

This new tool makes it very easy to take a screenshot of either the entire screen or a region (rectangle or free-form), which will then be ready for editing or to be saved. Problem, the shortcut to activate it is a bit complex: Windows key + Shift + S. Fortunately, a somewhat hidden parameter facilitates this access by allowing the tool to be activated with the “key”.Impr. screen” of the keyboard.

To activate this option, go to Settings> Ease of Access> Keyboard> Print Screen Shortcut (at the bottom of the page) and activate “use the Print button. screen to open screenshot“. A restart of the computer may be required for the setting to take effect.

The very practical hidden menu of the Start menu

Since Windows 8.1, the Windows button on the taskbar hides a special menu that remains little known and yet very practical. 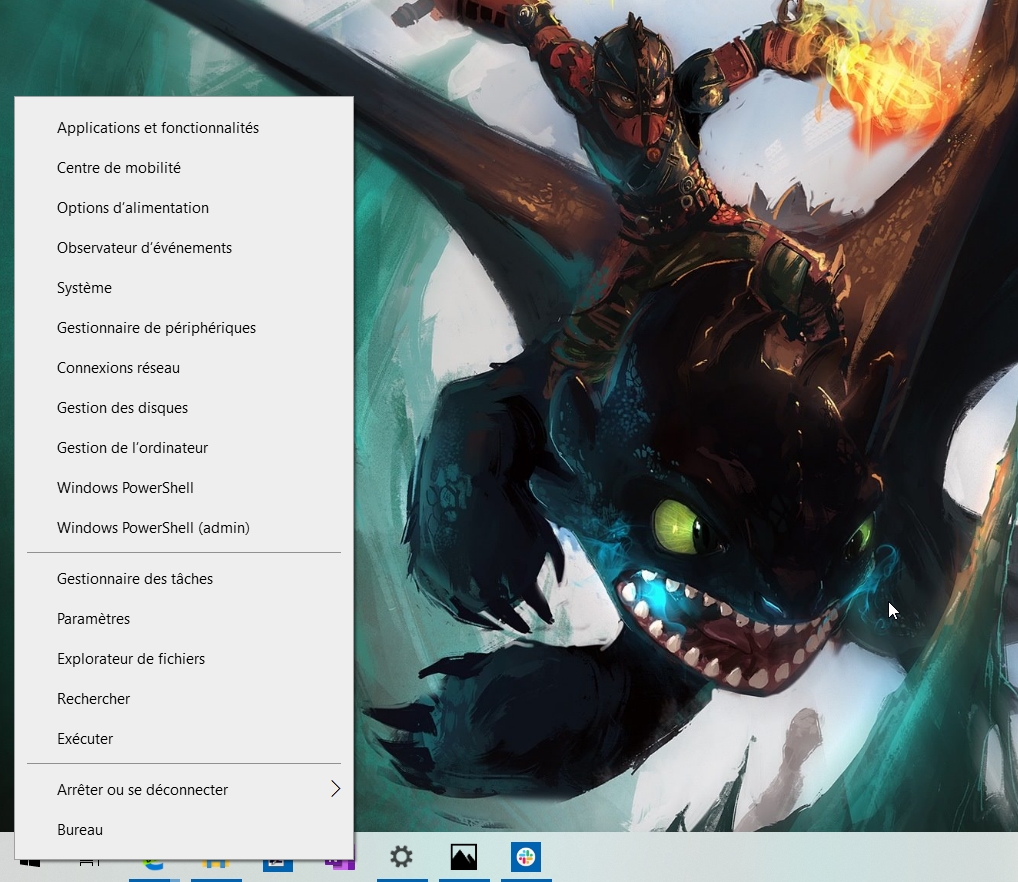 A simple right click on the Windows button brings up this hidden menu which displays a handy list of shortcuts to items often used bypowerusersWindows: Device Manager, Settings, Task Manager, Terminal PowerShell or “Application and featuresWhich makes it easy to uninstall software.

Paint 3D is a drawing application offered by Microsoft since Windows 10 Creators Update 1703. For Microsoft, it is the first application capable of easily producing 3D productions, but the application also hides very practical retouching tools. It is for example possible to very easily crop an object on an image.

To do this, open your image with Paint 3D and click on the “Magic Selection” tool. Roughly select the object to crop by resizing the magic selection frame.

The tool will then perform a first cutting, but it can be wrong about the limits of the object. Paint 3D then proposes to add the omissions, or remove the excess parts. When cutting is complete, the object is automatically selected. Just play with the copy and paste to save the image in a new file.

Write correctly in French with a new keyboard

My colleagues who use a Mac would give me amused looks when I had to hand copy characters that weren’t available on my keyboard like quotation marks or accented capitals, but that’s in the past now.

With an alternative keyboard layout developed by Keylos and easily installable, these characters become easily accessible. To install it, just download layout, extract the .zip archive and run setup.exe.

To activate it, simply click on “FRA” in the taskbar and choose “French keyboard (accented capitals)”. The instructions supplied with the keyboard allow you to know the position of these new characters. Thus the shortcut “Alt Gr + ‘<'" allows you to insert an opening quotation mark ("), and" Shift + Alt Gr + 'é' "allows you to write" É ".

If you like this new keyboard, you can remove Microsoft’s keyboard. To do this, go to the language preferences of Windows 10 (easily accessible by clicking on “FRA” in the taskbar, or by searching for “language” in Cortana). 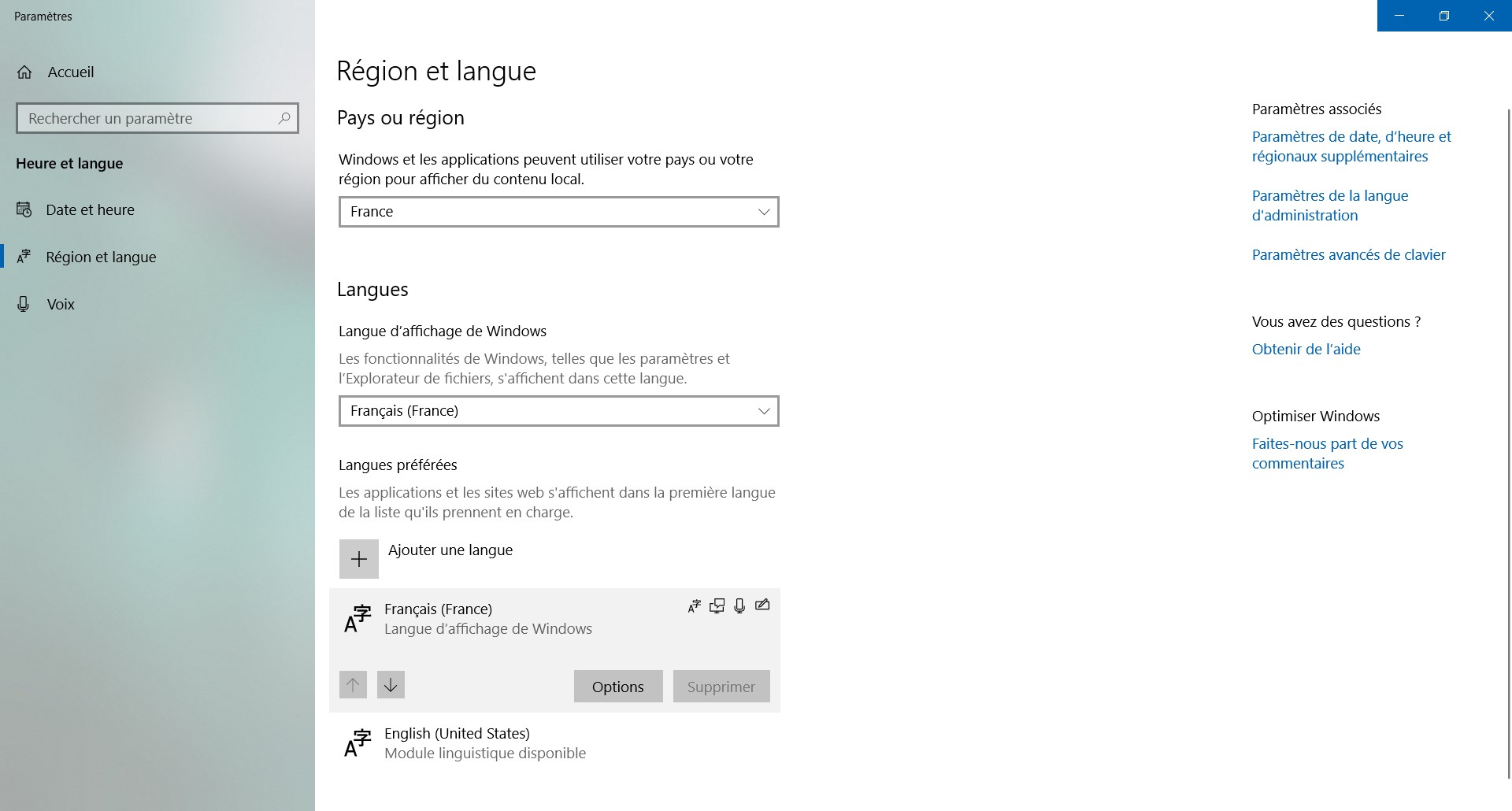 Then click on “French (France)” in the “Preferred languages” section, then on “Options”. Navigate through this new menu to the “Keyboards” section and delete the “French AZERTY” keyboard. 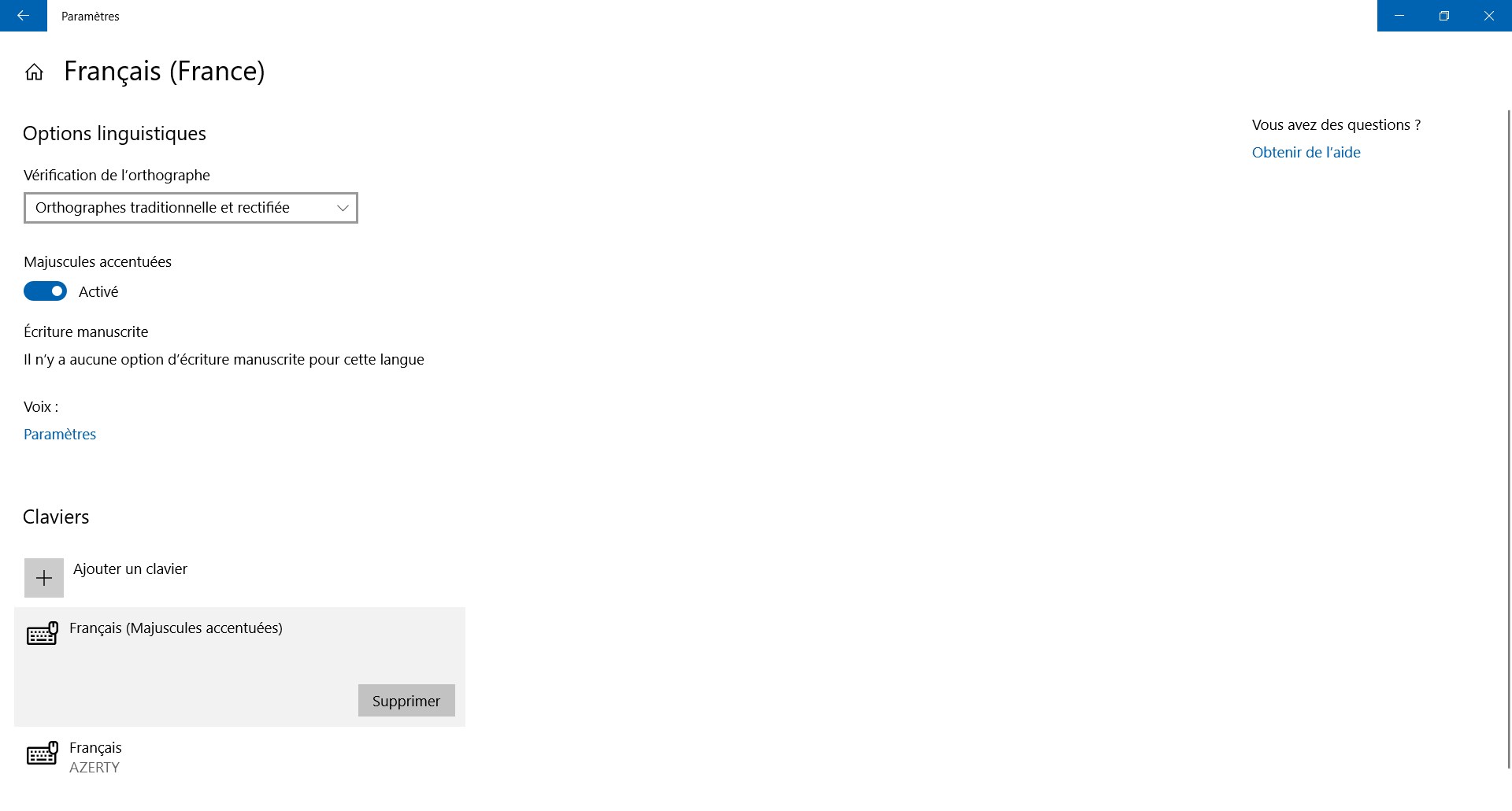 Add emojis easily to your messages

Emojis have become a staple in our messaging and social media discussions. Their use on smartphones is obvious, but not so much on computers where physical keyboards do not allow them to be used easily.

Since Windows 1803, Microsoft has offered a new shortcut that corrects this problem. From this version to insert an emoji, just type “Win ​​+. “Or” Win +; To display an emoji selection tool. Better still, it is possible to continue typing text to find and insert an emoji corresponding to the idea. For example, type “Win +. »Then« helicopter »allows you to insert a helicopter emoji. 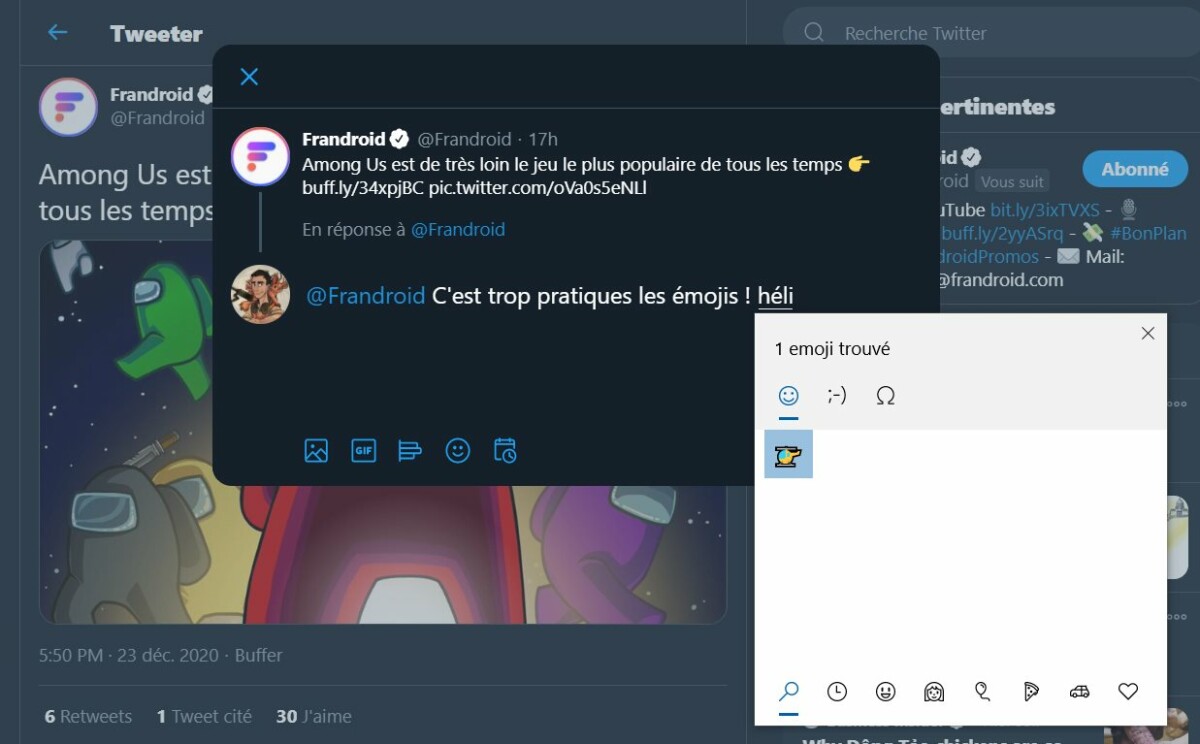 The emoji keyboard built into Windows 10

Quickly change the volume of an app

Since Vista, Windows has integrated a volume mixer which has not really evolved graphically since that time. This tool is not really suitable for high pixel density screens, and it takes several clicks to access it. Instead, we can offer you a much faster solution.

Windows 10 includes the Xbox Game Bar, which can primarily target PC gamers, but is actually very useful for everyone. For example, it includes a much better audio mixer than the one built into Windows 10. 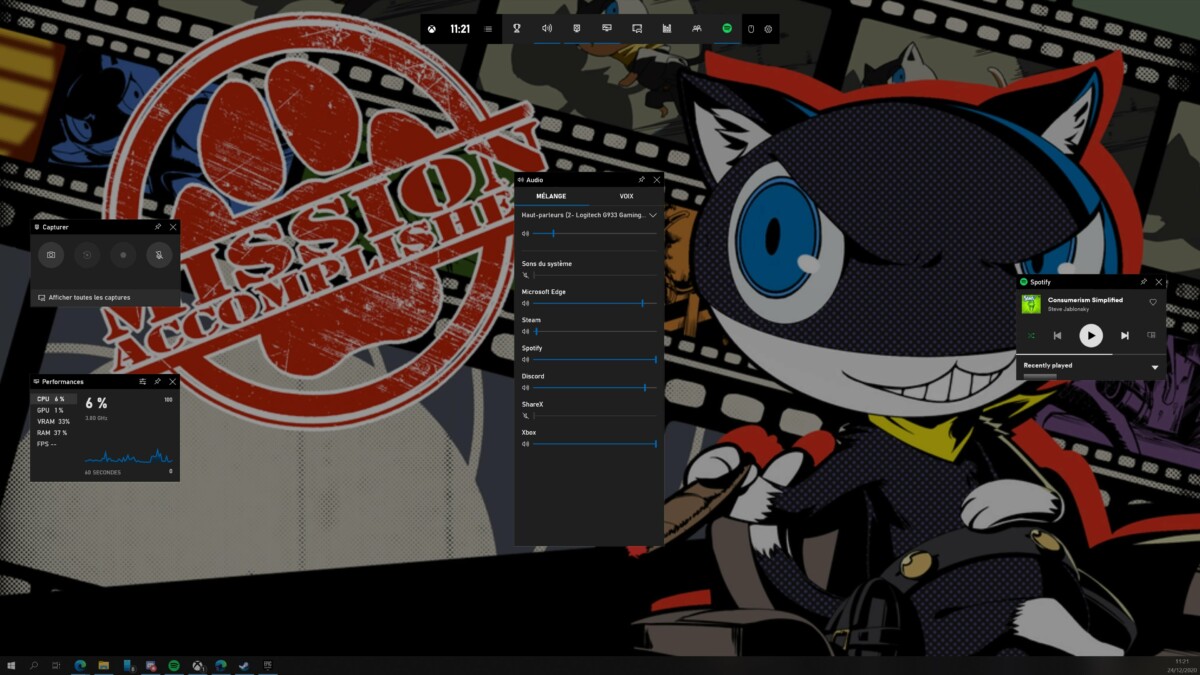 To access the Xbox Game Bar, you must use the keyboard shortcut “Win + G”. On this interface, you can choose the modules you want to display, such as the famous audio mixer. The latter allows in a few clicks to adjust the volume of applications, but also to change audio device (between your headset and the PC speakers for example) or microphone. It’s really very useful and it’s a shame that this tool is hidden behind what appears to be a tool dedicated to video games.

This Xbox Game Bar also includes a widget store, and you can for example have a module developed by Spotify to control your playlists.

Quickly open a new window of an already launched app

Here again, this is a trick that saves a lot of time on a daily basis and which is too little known. It is possible to very quickly open a new window of an application already launched. For example, this allows you to open a new file explorer window, create a new Word document or even open a new window in your favorite browser.

This shortcut is very convenient for a browser or explorer

Like clipping, trimming videos could previously be a complex operation reserved for paid tools. This is now a feature built into Windows 10, but not easy to find. If you’ve got a video that’s too long, and only want the best part of it, here’s what to do.

The rest is very simple, just select the extract of the video that you want to keep using the two white cursors. You can read the extract at any time to check the breakdown. When you are sure of the selection, just click on “save a copy” at the top right and voila, you have a short video perfect for social networks. 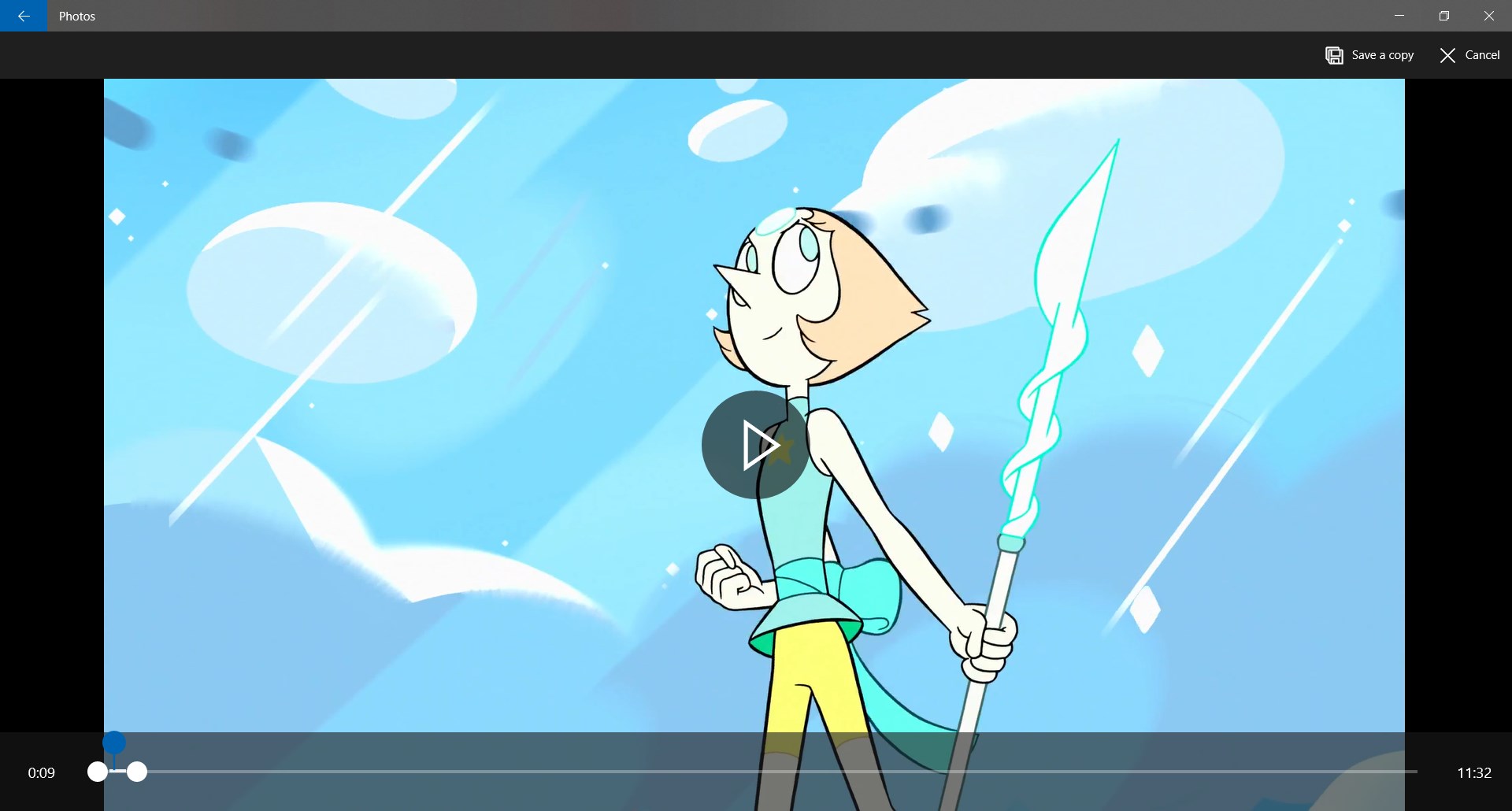 Microsoft regularly offers significant updates to Windows 10, which can seriously impact small internet connections. The giant reacted by proposing new settings to control consumption, but they are quite difficult to find.

Go to Windows 10 settings, then to “Windows Update”.

There, click on “Advanced options”, you will find many options to adjust the behavior of Windows Update (and postpone the update installation for example). Choose “Delivery optimization” at the bottom, then “Advanced options” in this new menu.

This window allows you to define the amount of bandwidth allocated to downloads in the background (such as automatic updates from Windows or apps from the Microsoft Store) and in the foreground (triggered by the user with “Check for updates ” for example). Gone are the evenings watching a pixelated version of Netflix because Windows 10 was downloading an update. 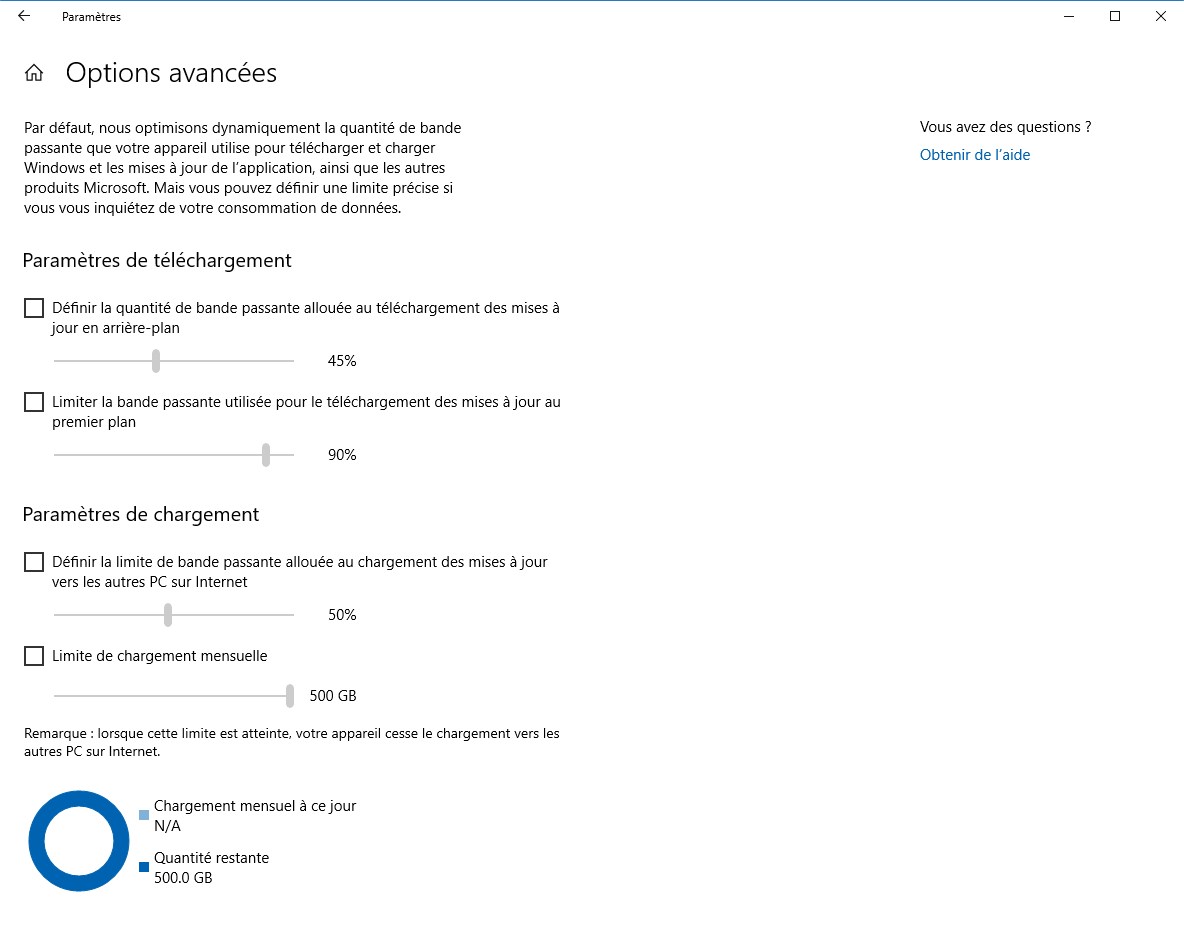 What are your tips?

If you have discovered any handy tips or shortcuts in Windows 10 recently, feel free to share them in the comments of the article!