Wireless charging technology presented with the new iPhone 12, MagSafe is available on a whole series of accessories and cases. Long awaited, the MagSafe Duo charger is finally available. Bad news: it doesn’t have an included adapter either. 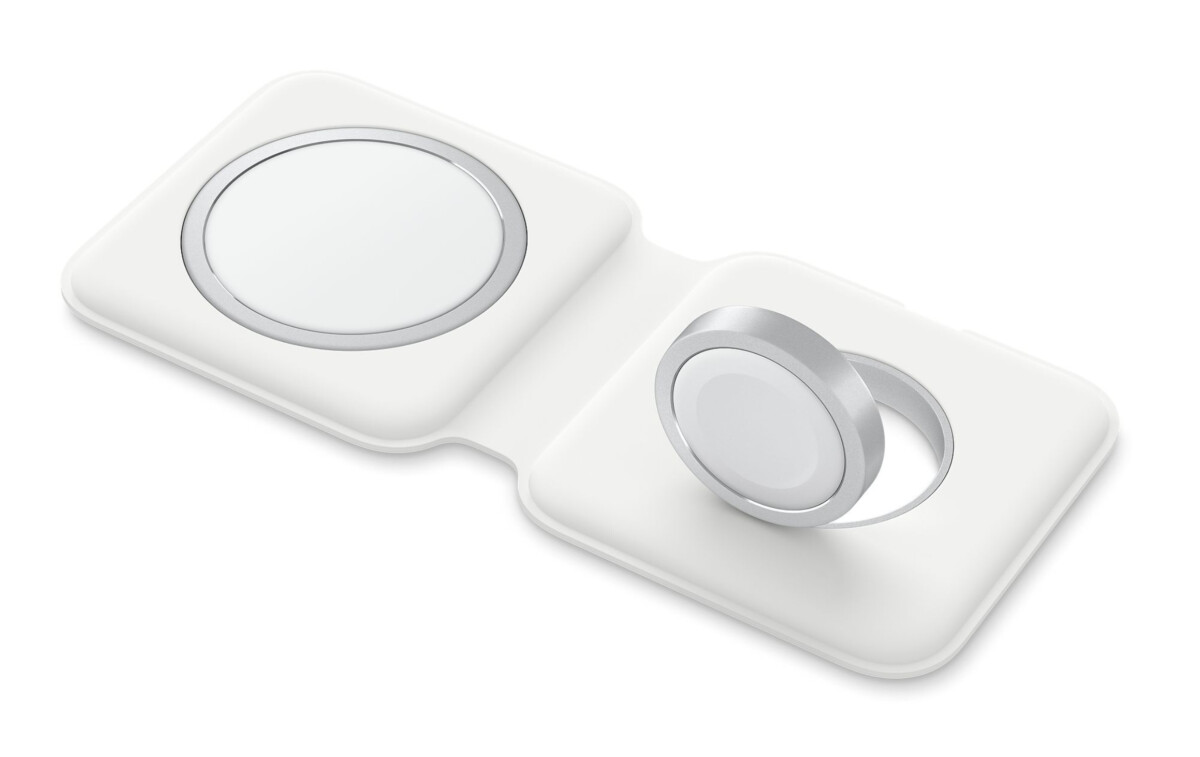 After the silence of the AirPower wireless charging mat, which we still do not know if it is definitely dead or if we still have some jolts, the arrival of MagSafe technology at the October conference has hinted at some good waves on the side of Apple.

The Californian brand unveiled its on-board induction charging technology on the back of the iPhone 12, iPhone 12 mini, iPhone 12 Pro and iPhone 12 Pro Max. Promised faster, more secure with its system of magnets, it also came with a good number of compatible accessories, from the silicone shell to the magnetic holder for cards, including chargers. Apple had launched its MagSafe charger, but it is above all the MagSafe Duo that we expected (or MagSafe dual charger as it is called on the French Apple Store).

Two charges at once, but for all Qi devices

Despite the proliferation of its products, the Cupertino giant did not have in its name a device capable of simultaneous and wireless charging of an iPhone and an Apple Watch or even its AirPods headphones. Catalog error now partially remedied. As of this week, the MagSafe Duo is finally available, however at an astronomical price of 149 euros (when the MagSafe charger is displayed at 45 euros). 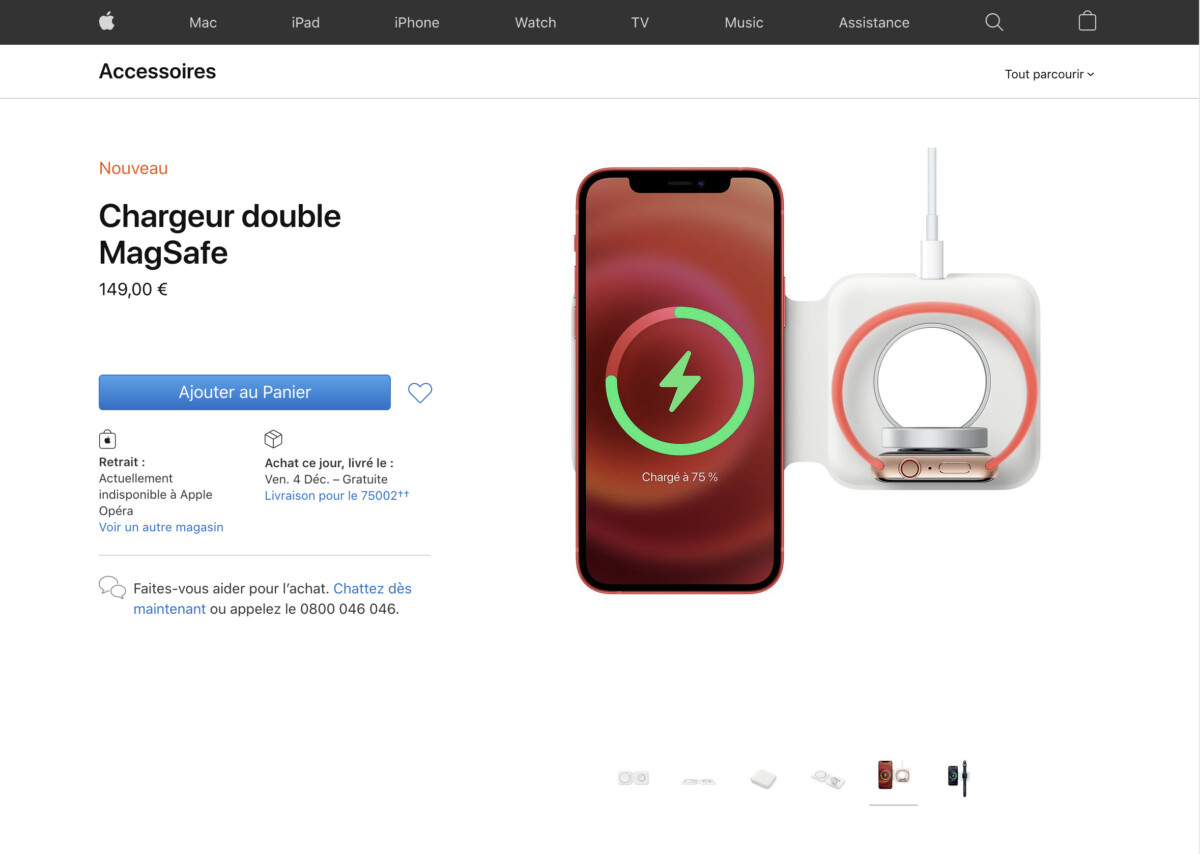 Certainly, the MagSafe Duo will allow you to inductively charge your smartphone or your wireless charging box for AirPods as well as your connected watch. The cradle looks like an inlaid mount for the MagSafe Charger and charger that came with Apple Watch. It has for him the practical side, because it folds in half and the space is therefore minimal to be easily transported.

Another advantage, the MagSafe Duo is not reserved for Apple products only and can be used, especially for the flat part, with any other device compatible with Qi charging.

Less powerful than the MagSafe charger

On the bad news side, however, Apple once again skipped the AC adapter and the MagSafe Duo only comes with the Lightning to USB-C cable. A habit that is establishing itself at the apple manufacturer which has also deprived its latest iPhone and its Apple Watch Series 6 as well as Watch SE. 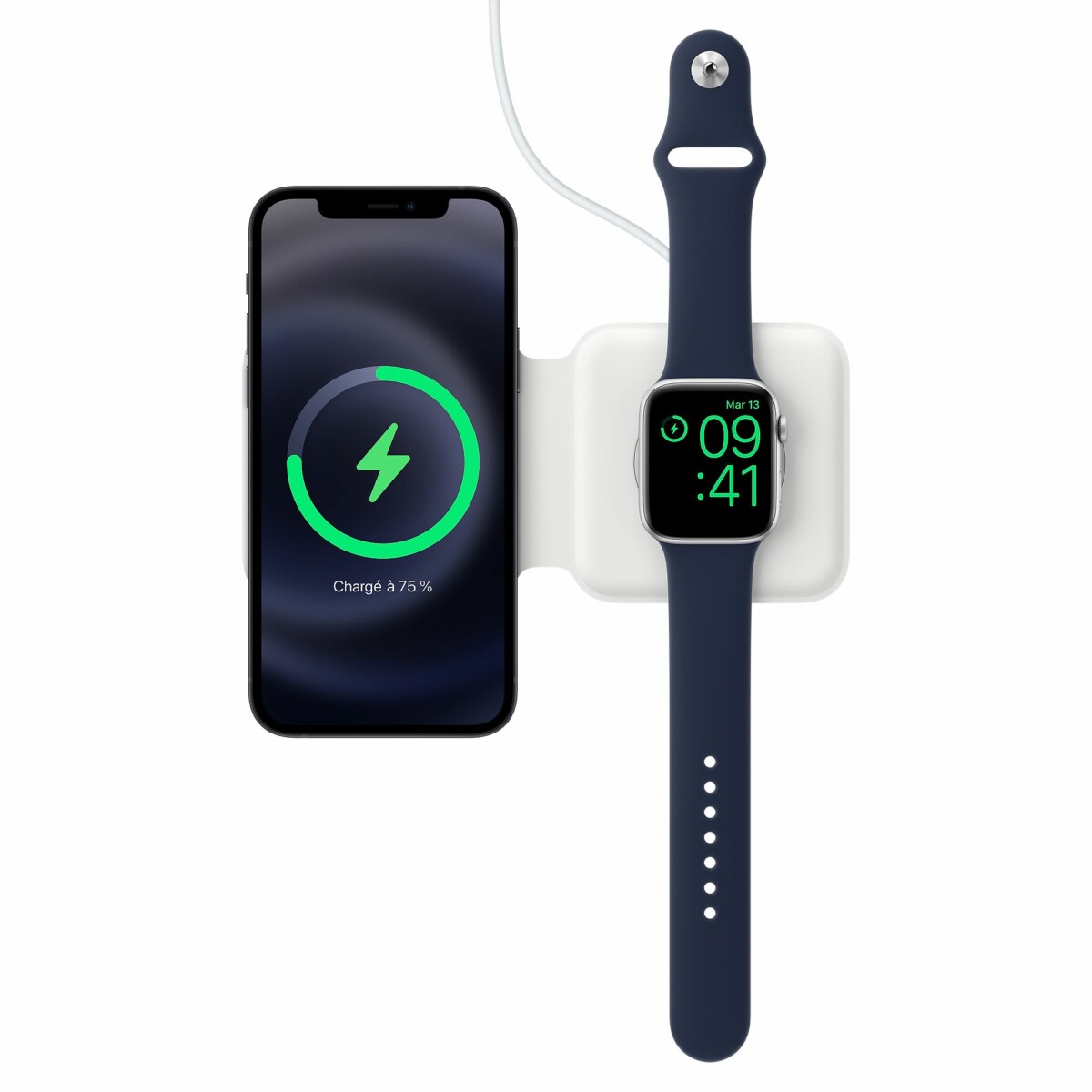 The MagSafe Duo charger can charge a smartphone and an Apple Watch at the same time // Gamesdone: Apple

It was known that one of the problems with the AirPower had been the risk of overheating with the power that had to be sent to recharge up to three products at the same time. Apple does not want to experience the same disappointments with two devices. The brand recommends a 20W USB-C power adapter (25 euros extra) which will only allow fast wireless charging at 11 W. The MagSafe Duo can support a 27W adapter, but for wireless charging at 14 W when The MagSafe single charger recharges with a maximum output power of 15W with a 20W adapter (also not included).

It is interesting to note that the MagSafe Duo will therefore recharge your iPhone 12 less quickly than the simple charger which reached the maximum charging power of the latter. But the strangest thing too is that Apple recommends using its dual charger with a 27 W adapter … which is not sold on its site where a 30 W charger is offered. It therefore seems better to bet on the MagSafe Duo for mobile use, with a USB-C port nearby if you don’t want to add an adapter. Otherwise, many accessories manufacturers have followed Apple’s footsteps to present rather interesting and often less expensive compatible chargers.