The new iPad Pro are firing on all cylinders. Unveiled Tuesday at the spring conference, Apple’s touchscreen tablets embed the powerful M1 chip as well as the 5G connection. And to complete it all, the largest model now sports a mini LED screen.

Apple has unveiled the 2021 version of its touchscreen tablet. And, if it does not fundamentally change in form, inside, it’s a bit of a revolution.

The power of the M1 chip

After the MacBooks, the Mac mini and now the iMac, the iPad Pro now also has the right to ship the M1 chip designed by Apple. Designed on the same bases as the A14 chip of the iPhone 12, it will provide more power to the device, which remains available with 11 and 12.9 inch screens.

The 8-core chip promises performance up to 40% faster than the previous generation. Enough to fulfill Apple’s ambitions of making the iPad Pro a replacement for a personal computer. Apple thus ensures that the iPad Pro will offer more fluidity in navigation and in the management of multitasking.

To complete its skills and take advantage of its power, the iPad Pro now relies on its Thunderbolt 4 compatible USB-C port, to bring even more speed and versatility to the device. The Thunderbolt will support Ethernet speeds of up to 10 Gbit / s, allowing in particular the connection of a 6K screen such as the home Pro Display XDR (however via a docking station).

A mini LED screen for the 12.9-inch iPad Pro

In terms of design, however, there are some differences to note. The front-facing TrueDepth camera is significantly improved with a 12 MP ultra-wide-angle sensor (instead of the old classic wide-angle). It is enhanced by the Center Stage function which ensures the user is always well centered during video calls. Face ID facial recognition is always present to unlock the device.

But the main change in the design concerns the screen. And this is where the two iPad Pros will experience their first real difference. The 11-inch model includes a Liquid Retina screen as before, while the large 12.9-inch model will now sport a Liquid Retina Display screen made up of more than 10,000 mini LEDs. Without being OLED, it will promise very black blacks and stronger contrasts, but above all a wider range of colors (up to 1000 nits of full screen brightness and up to 1600 nits at peak). Something to satisfy professionals in photo editing, video editing. Because the device also supports HDR10, Dolby Vision, HLG. And for sound, compatibility with Dolby Atmos is still required.

Up to 2TB of storage

The iPad Pro still relies on its four speakers distributed on each side as well as studio-quality microphones. On the back, we still find the camera module composed of a wide-angle sensor, an ultra-wide-angle and the LiDAR scanner for depth and distance detection. The camera will, like the iPhone, be able to count on the Smart HDR3 to improve the rendering of its shots, even if taking photos with an iPad remains a difficult activity …

Both iPad Pro will offer Wi-Fi 6 and 5G connectivity. Storage has been taken a step further and promises to be twice as fast. The iPad Pro now offer versions in 128 GB, 256 and 512 GB with 8 GB of RAM. The configurations with 1 or 2 TB of storage will run with 16 GB of RAM.

Good news for gamers: iPad Pro supports the DualSense controllers of the PS5 and the Xbox Controller of the Xbox Series X / S, to better enjoy Apple Arcade.

The two touch pads can be pre-ordered from April 30 for availability in mid-May. The 11-inch iPad Pro starts at 899 euros while it will cost 1219 euros for the 12.9-inch iPad Pro. And if you are tempted by large storage capacities, know that the model with 2 TB will cost you 2,429 euros in Wi-Fi and 2,599 euros for the 5G version. 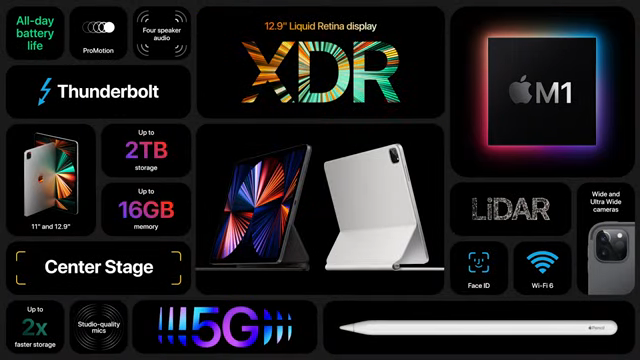