As we have known for some time, Realme is working hard on its next high-end smartphone, the Realme Koi. However, since the smartphone is reserved for the Chinese market, the manufacturer is also preparing two other high-end smartphones for the rest of the world. We now know more about the characteristics of these products, but also their name or launch.

A reliable source familiar with the matter thus shared with us the characteristics of the brand’s next two premium smartphones, expected in the first quarter of 2021.

A Realme Race Pro with a very attractive technical sheet

The Realme Race Pro will thus be the official name of the Realme Koi. The smartphone will be equipped with a Snapdragon 888, the latest high-end processor from Qualcomm, which already equips the Xiaomi Mi 11, but also the Samsung Galaxy S21 across the Atlantic. The phone will also be offered with three different storage configurations: 128, 256 or 512 GB. On the battery side, there will be a 5000 mAh accumulator compatible with a particularly fast charge of 125 W. It is still unheard of on the smartphone market.

The Realme Race Pro is not, however, the only high-end smartphone expected from the manufacturer. The Chinese brand is also preparing a Realme X9 pro, this time equipped with a Dimensity 1200 chip from MediaTek, not yet formalized, and which would succeed the Realme X2 Pro. The smartphone will be equipped this time with a 6.4-inch screen, still Oled, with a definition of 2400 x 1080 pixels and a refresh rate of 120 Hz. 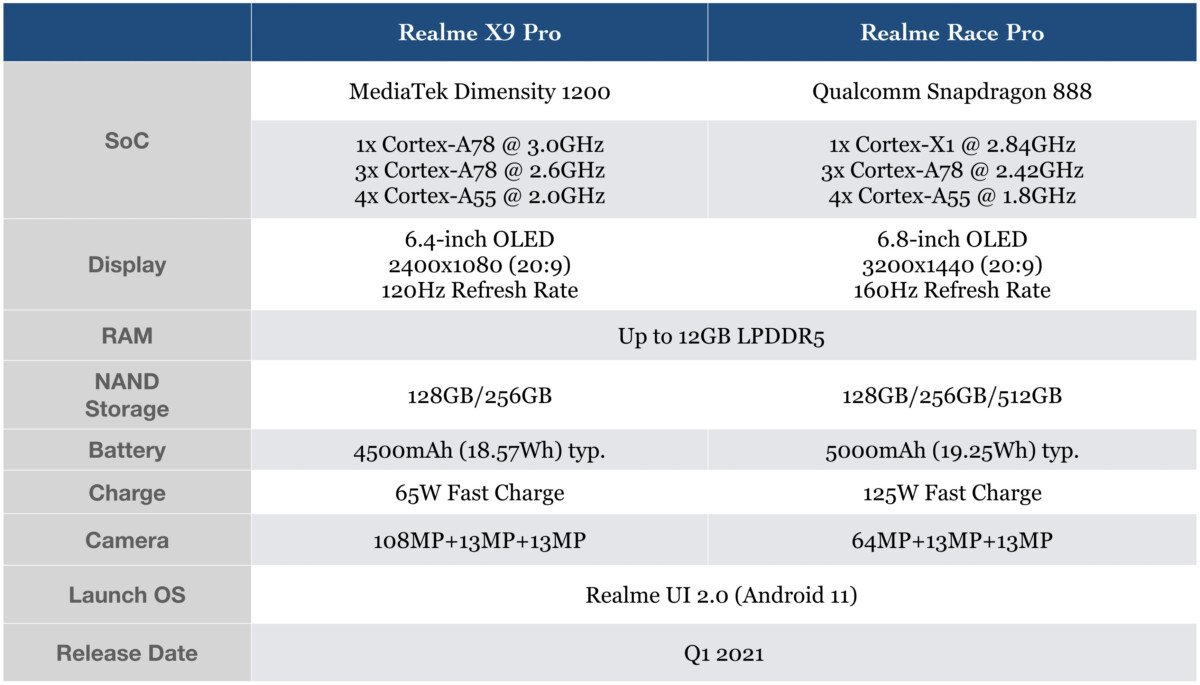 The characteristics of the Realme Race Pro and Realme X9 Pro // Gamesdone: Frandroid

On the storage side, it will be necessary to count on 128 or 256 GB depending on the version, when the battery will have a capacity of 4500 mAh, compatible with a 65 W wired charge, like the Realme X50 Pro. Note also that the Realme X9 Pro will benefit from three photo modules on the back of 108, 13 and 13 megapixels.

The two smartphones are expected in China in the first quarter of 2021 and will be released with the Realme UI 2.0 interface based on Android 11. We can therefore expect a release in France during the first half of the year.

When asked, Realme declined to comment on the characteristics of these two smartphones, but a spokesperson told us that the brand was indeed working on two high-end smartphones this year.