Have you seen a letter from an anti-5G group shared on social networks? It’s a bad joke of unscrupulous people taking advantage of the situation. Unfortunately, the media shared this letter without hindsight. 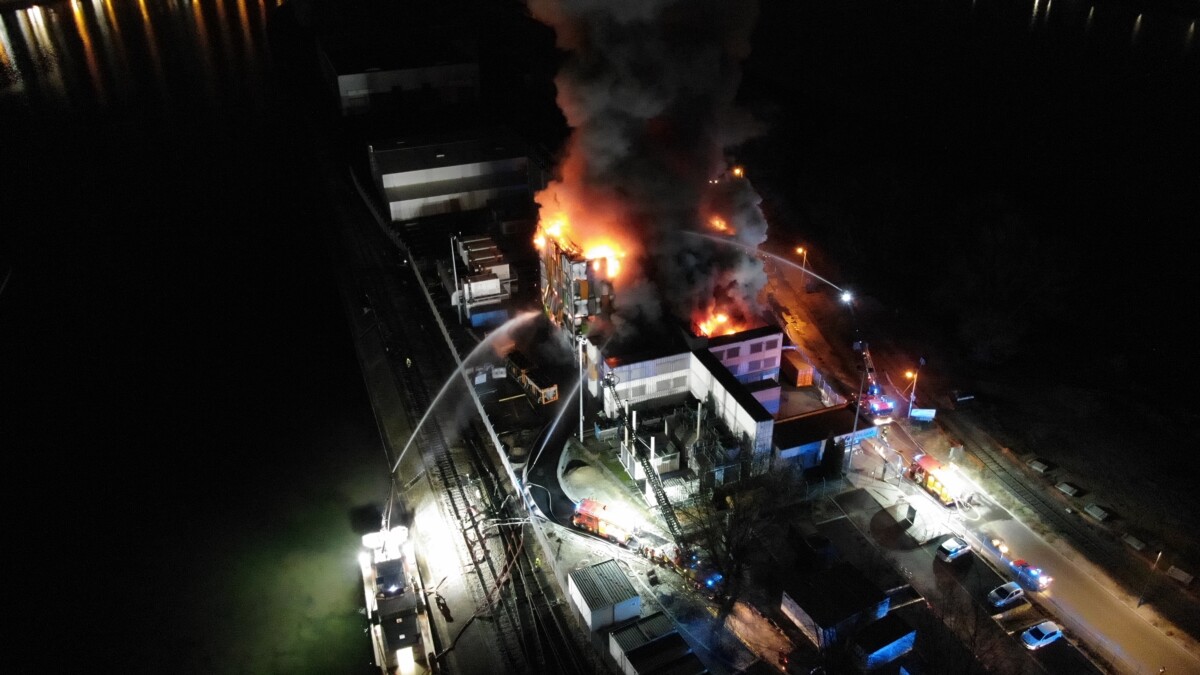 One of the industrial disasters that will mark the year 2021 in Europe is the fire in an OVHCloud data center. One of the four data centers was completely destroyed, it is the SBG2 data center. A second, the SBG1, was partially destroyed. Electricity was cut in the other two data centers, SBG3 and SBG4.

OVHCloud plans to restart the SBG3 and SBG4 data centers by March 21, while the two most affected are currently being cleaned up to assess the damage. As we clarified yesterday, the cause of the fire is not known but there is a suspect. OVHCloud is currently studying the images of nearly 300 security cameras to understand what happened and make fixes on its data centers which share the same operation.

If you have your data that was stored in one of the affected data centers, you can now have a bit of clarification on the availability of a potential backup. OVHCloud communicates more and more details depending on the different offers and the different data centers where your data was stored. A web page to visualize this progress, it is being deployed.

Update March 14, 1pm
3/3
60 tech work on the site. Still lot of to do, but it’s going faster that expected. We keep the same ETA and maybe we will be faster.

A webpage with the final state of:
– primary data
– internal backup (not contractual)
– service backup
is in progress.

Unfortunately, for a few hours now, several media have been sharing the supposed letter from an anti-5G environmental group that claims the OVH fire.

A false claim in the form of a hoax

In the letter, widely shared for a few days, everything suggests a hoax:

“The date of our action was not chosen at random. The fire was scheduled to break out on March 11, the tenth anniversary of the Fukushima disaster. We went up the digital flow from a connected toaster to enter the OVH data center and trigger a short-circuit, this by the sole force of our mind, helped only by a few boxes of LSD. But the boxes were too dosed, once inside, we did anything, and the fire broke out too soon – if however the mere power of our shattered brains can cause such damage, which we will unfortunately never know. There you go, sorry for the inconvenience. Have a good day. The Truly Infallible Organization. March 11, 2021. “ 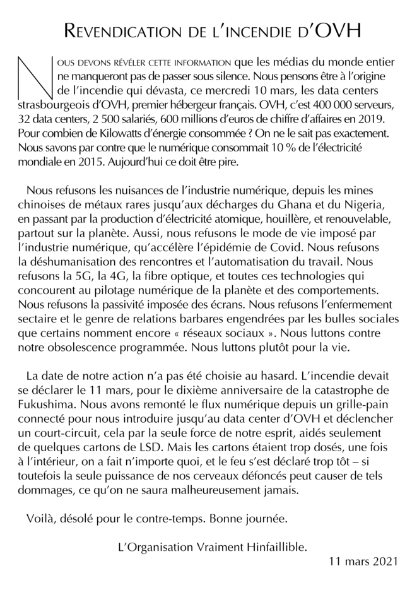 This letter is obviously a bad joke from an anti-5G small group which is taking advantage of the situation to communicate. In fact, the cause of the fire has not yet been established, but an investigation has been opened. The letter that you can read above was sent to a few editors, unfortunately some have decided to share it without issuing any analysis.

Octave Klaba asked his clients to remain vigilant, “ We ask our customers to be careful with the emails they receive: in times of crisis, malicious activities (phishing, spam, etc.) often increase (…) It is more important than ever to to remain vigilant. ».