Looking for the best 65 inch TV? See it big with our selection of large format televisions. 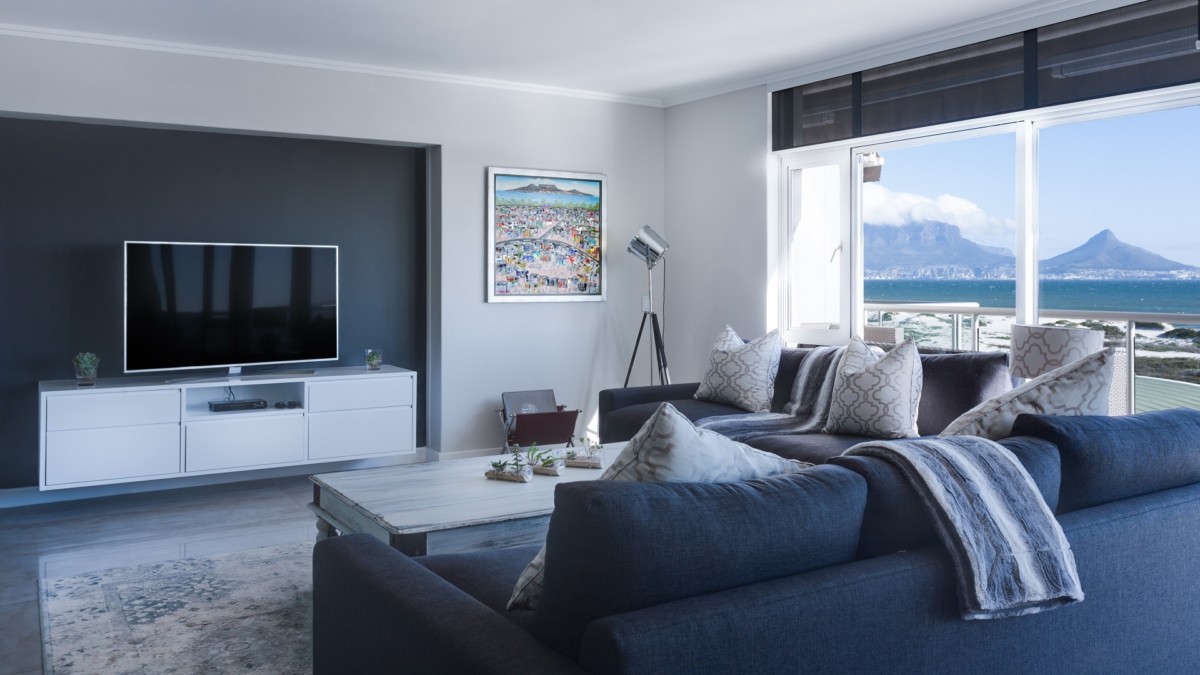 The screen diagonals also extend in our living rooms. 65-inch televisions are the most sought-after – and the most purchased – today, ahead of 55-inch TVs. Their growing popularity is causing big price drops. Launched at 3,100 euros, the LG 65CX for example will soon be replaced by a C1 at the public price of 2,800 euros.

If you like large diagonals, you will be in for a treat in 2021, a trend that is only confirmed after a CES which saw the announcement of many 65-inch TVs.

The best 65-inch TVs at a glance

If in the end 65 inches do not fit in the living room, go to our size guides:

And for our selection of the best TVs it’s here.

We recommend it in all its diagonals and the 65-inch version is no exception: the LG OLED 65CX is undoubtedly our recommendation in the segment. Its full specification sheet should appeal not only to those who want excellent picture quality, but also to gamers. 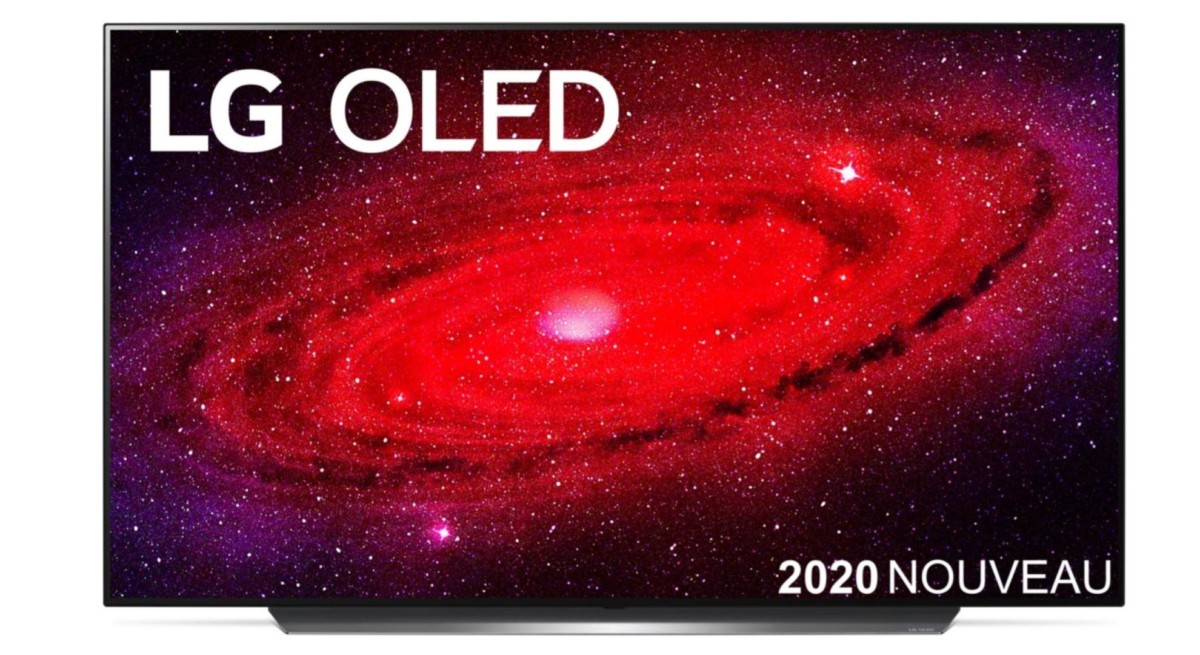 The CX line succeeds LG’s very good C9 line. It borrows in particular its design with ultra-thin borders, which only highlight its 4K UHD definition. Without forgetting, of course, the quality of the infinite contrasts and rich colors offered by OLED. This 65-inch CX, like the rest of the range, features the third generation of the Alpha 9 processor. The Korean brand announces performance 15% higher than its predecessor which fitted the C9. And as we noted in our review, everything this processor allows is well worth the detour. Between its many image processing (AI Picture Pro, True Color Accuracy Pro, AI Upscaling, etc.), color accuracy, optimization of HDR content or even upscaling of a source with less definition, the processor fulfills all its promises. Add to this the assistance of an artificial intelligence, called LG ThinQ, which offers improved image processing that adapts according to the content viewed.

On this 65CX, we will find all the best standards to approach the cinema experience, namely support for HDR10 (but no HDR10 + here), Dolby Vision, Dolby Vision IQ, as well as Dolby Atmos which promises a its immersive. Gamers won’t be left out with the presence of an HDMI 2.1 socket, which allows 4K at 120 FPS and variable refresh rate (VRR) to combat the tearing. Without forgetting the G-Sync compatibility and a 100 Hz panel. In short, with the imminent arrival of the new next-gen consoles, the PS5 and the Xbox Series X, this television will therefore be an ideal support, especially with a panel of a substantial diagonal to make the most of your gaming sessions.

Like all LG televisions, the CX runs on webOS. Compatibility with Google Assistant and Alexa is also guaranteed, as well as with Apple HomeKit, AirPlay 2 and Chromecast. To find out more about this TV, take a look at our full review of the LG OLED65CX.

Its replacement, the LG 65 C1, was announced a few weeks ago. However, it only brings minor changes. So enjoy this great TV at a discount while stocks last.

Sony also offers a very good TV, also OLED, 65 inches with its flagship, the KD-65AG9. It is much more expensive than its AG8 version, but the latter making some technical concessions despite its interesting technical sheet, we will rather focus on the high end. Even if of course, quality has to be paid for and is not necessarily within the reach of all budgets. 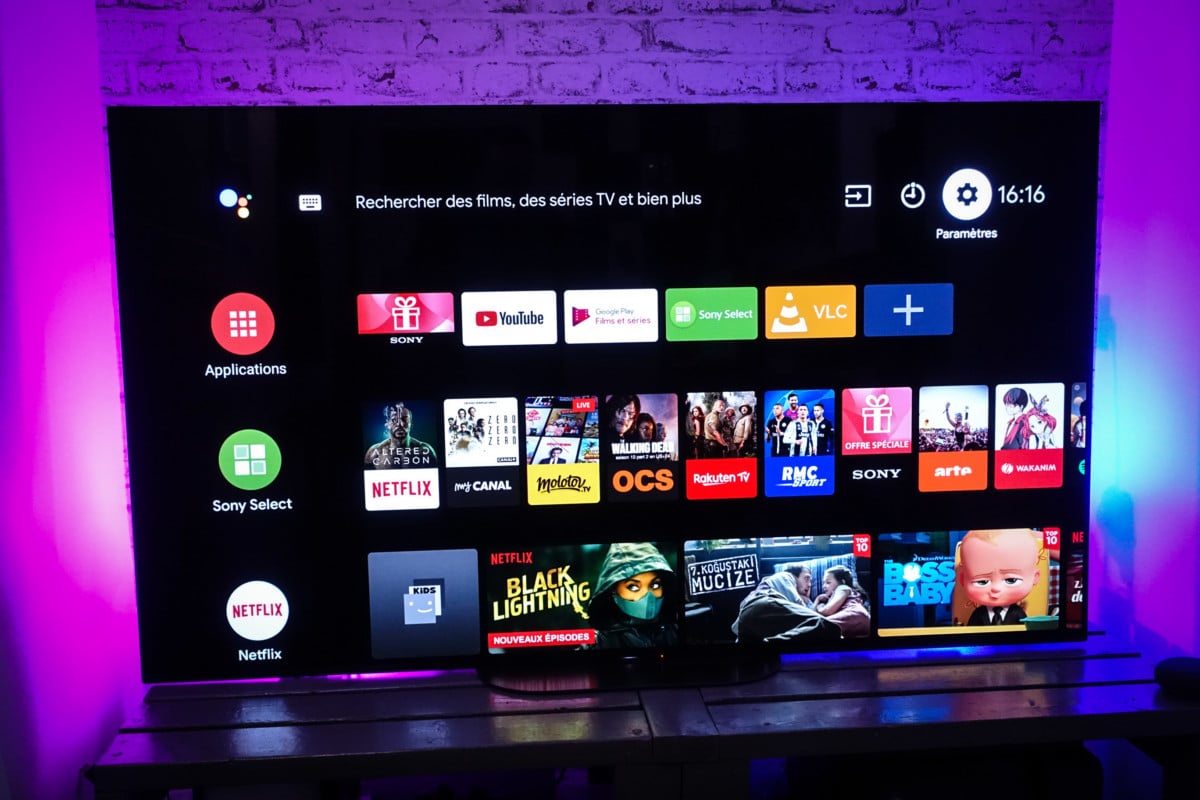 It’s simple: the AG9 range contains all of the manufacturer’s best technologies. Sony has polished its TV down to the last detail. It first integrates an OLED panel, of course. But this TV makes all the difference with its excellent Sony X1 Ultimate processor. The latter not only ensures good fluidity of the interface menus, but also very good performance at the level of theupscaling. There is also Acoustic Surface Audio + technology, which consists of producing sound through vibrations of the glass panel covering the television. This is done by means of “actuators”. Result? Detailed and precise sound, since it adapts to the location from which the sound emanates in the image. A good point for immersion, especially since the sound processing is provided by Dolby Atmos.

The panel also supports the best video standards such as HDR10 (but not HDR10 +) and Dolby Vision. The TV runs on the Android OS, with its host of applications available. It is also compatible with Google Assistant, AirPlay 2 and it integrates Chromecast to stream content from a smartphone, computer or tablet.

To find out more, you can read our review of the Sony KD-65AG9, but beware, it is not HDMI 2.1 compatible. If you are a gamer, this is a point to consider.

To enjoy a QLED panel while opting for high-end, the Samsung QE65Q80T is a good choice. As indicated by the letter “T”, this is a model from the 2020 vintage. 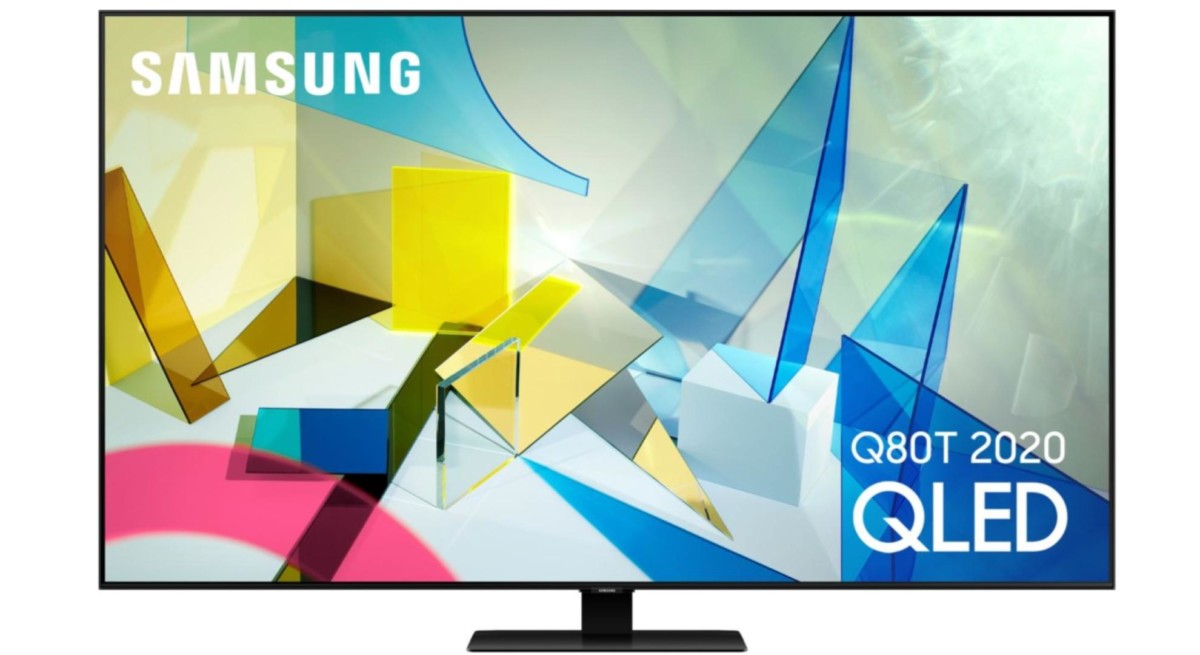 The panel has a refresh rate of 100 Hz, with obviously a 4K UHD definition. The television has the very powerful Quantum Processor 4K, which also incorporates artificial intelligence. And that’s not all since this QE65Q80T also incorporates several other advanced features, such as the Local dimming silver which offers deeper contrasts, as well as the system object tracking sound which, concretely, allows the sound to follow the movements of the action on the screen. Note also that if the television does support HDR10 +, Dolby Vision will unfortunately not be there. We will console ourselves with the HDMI 2.1 compatibility available, and therefore the management of the display in 4K at 120 FPS as well as the variable refresh rate (VRR).

Samsung still offers some very appreciable little assets that make the difference, such as the Ambient mode which allows you to remove the black screen to broadcast content such as personal photos or other scenery. With such an option, Samsung confirms its desire to produce high-performance televisions, but also design, which fit into any interior, like the The Frame range for example. Finally, like all the brand’s televisions, this Q80T runs under the Tizen OS with many on-board applications. To find out even more, do not hesitate to go to our complete test of the Samsung QE55Q80T, also valid for the 65-inch diagonal which interests us here.

Regularly the subject of promotions (we saw it below 700 euros during the winter sales), the Hisense 65U7QF represents one of the best value for money on the market. Beyond its elegant design, it is especially its VA panel with Full LED backlighting that surprises. 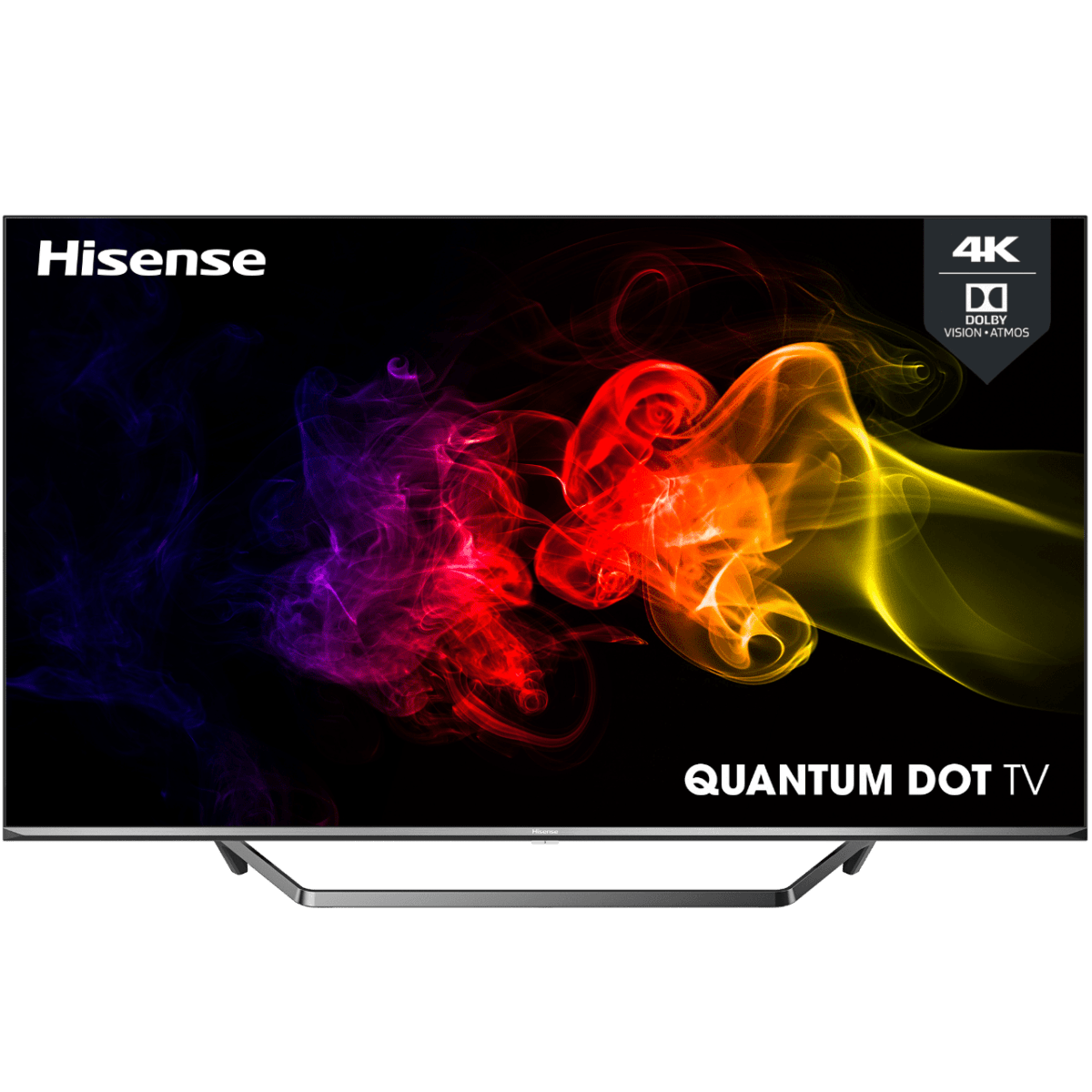 The panel indeed exceeds 700 cd / m2 when measuring brightness. Coupled with a very good level of contrast, this allows it to present HDR performance that is simply unprecedented at this price level. And colorimetry is not left out since the colors are very well calibrated both in HDR and SDR as long as we activate the cinema mode.

Things are a little less satisfactory for the players, the panel is not very responsive and especially the HDMI 2.1 is not present. These flaws are acceptable to the casual gamer, but which will put off anyone who has just invested in a brand new next-gen console.

The operating system is the other weakness of the television, if the major streaming services are there, French apps like MyCanal or OCS are not. The sound rendering is passable, but we really recommend the use of a sound bar for a rendering worthy of the name.

Despite a few imperfections, the Hisense 65UQF is a pretty good deal, whether it’s on sale or not. Note that it is found under the name 65U72QF at some resellers. Find his full test here.

While 65-inch diagonals usually exceed 1000 euros, some brands are resisting to offer high-performance televisions that are cheaper than the competition. This is the case of TCL with its C71 series, which we often recommend in our lines. Indeed, the brand figures prominently among entry-level televisions, especially as the C71s offer a QLED panel with very satisfactory contrasts. 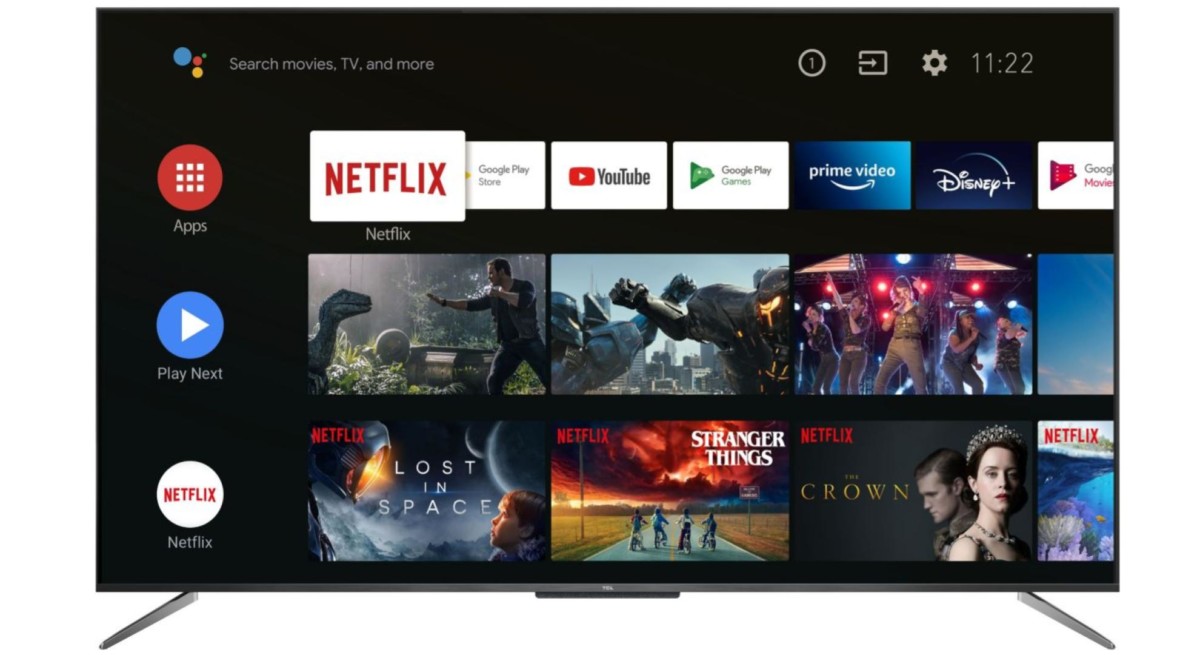 Where TCL scores points is also in its support for the best HDR display standards, namely Dolby Vision and even HDR10 +. The sound is assured him of Dolby Atmos. For this price, and this diagonal size, it is quite interesting.

The TCL 65C715 also has the Android TV 9.0 operating system on board. The Chromecast function as well as the compatibility with Google Assistant and Alexa are also in the game. And those who have the annoying tendency to lose the remote control will be able to console themselves with the advanced voice control integrated natively in the television.

At this price, however, do not expect HDMI 2.1.

When it comes to television, there is a simple rule of thumb for estimating the necessary setback: 4.5 cm per inch. Which gives us 292 centimeters of hindsight. We can round to three meters. This distance should allow you to fully immerse yourself in your content while limiting eye fatigue. Of course, you can adapt this according to your preferences.

How do I estimate the diagonal I need?

By applying the rule of 4.5 cm per inch, we can also quite easily determine the diagonal we need for its interior. It makes sense: the more distance you have, the more you have to opt for a large diagonal. With 1.80 meters, opt for 43 inches; with 2.25 meters, go to 50 inches; with 2.50 yards, attempt 55 inches, and finally with 3 yards or more, soar to 65 inches and beyond. Generally speaking, if you are in doubt (and the TV fits in the room), wander towards the larger option rather than the other way around. You quickly get used to the luxury of a big screen.

How did we make this selection?

Frandroid has been following the new technology industry for many years. We based our selection primarily on our personal experience of the products. Although not all products have been properly tested, we have generally had the opportunity to use them, either personally or professionally. If this is not the case, we make our choices by consulting colleagues or user reviews. 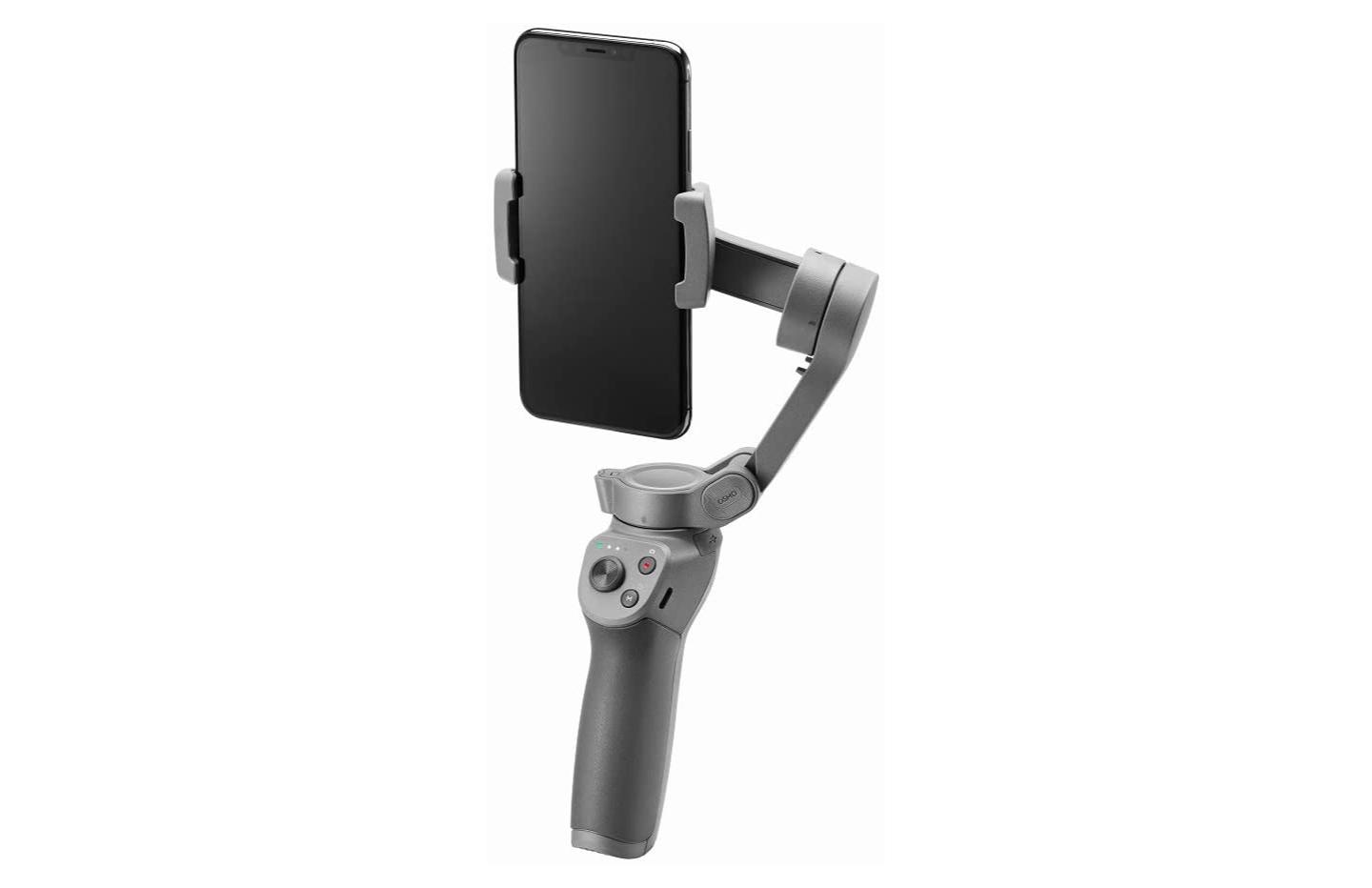