Microsoft has made a very special choice to expand the storage of its Xbox Series S and Series X: expansion cards designed with Seagate. We were able to test a copy. 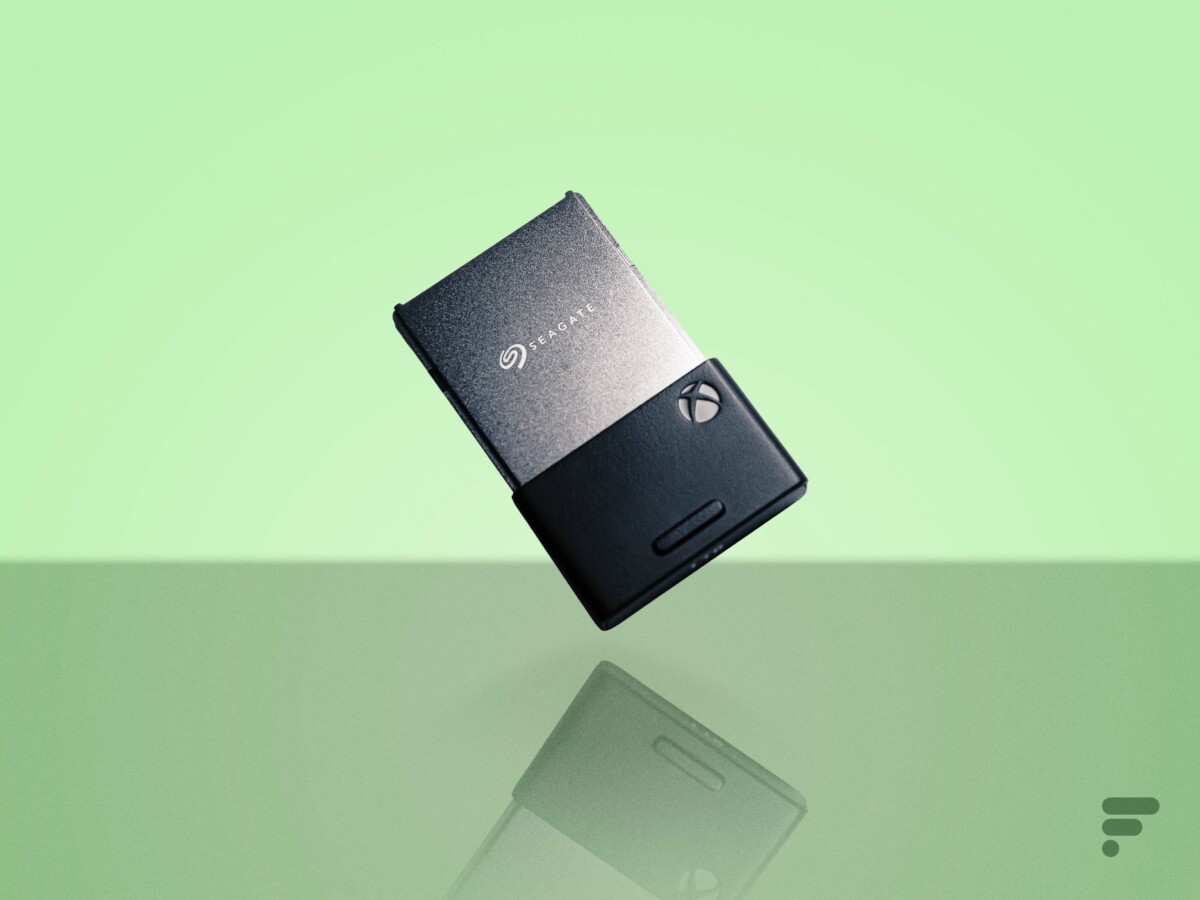 New game consoles, be it the Xbox Series X and Series S, or the PlayStation 5, come with high-performance SSD storage systems. This allows old games to drastically reduce loading times, and even make them disappear on new games, or completely change the design. It is therefore a real change of generation for this element of the architecture of a game console, but which has a price: this technology is still expensive (on the scale of a product marketed at 300 or 500 euros) and the storage capacities of the consoles were therefore limited.

To correct this problem, Sony and Microsoft have relied on two very different solutions. If the first has chosen to offer players to partially disassemble the console to integrate the same kind of NVMe SSD that we find on PC, Microsoft has instead made another choice: a tailor-made solution that promises to be more simple, but for what concessions? This is what we will see.

The Seagate expansion card relies on standard components like a Phison controller, NVME PCIE 4.0 storage, and CFExpress connection format, but it’s still a product entirely dedicated to new Xboxes. This means that it will be impossible to connect it on another device. It is only compatible with Xbox Series S and Xbox Series X. This also means that only Microsoft certified expansion cards will work at this time, and as is there is only one on the market. : the one we are testing here.

This copy was loaned to us by Seagate as part of this test.

The first impression you get with the Seagate card is very good. We have a product with beautiful finishes and attention to detail such as the use of a small transparent and rigid plastic cap to protect the end of the card. 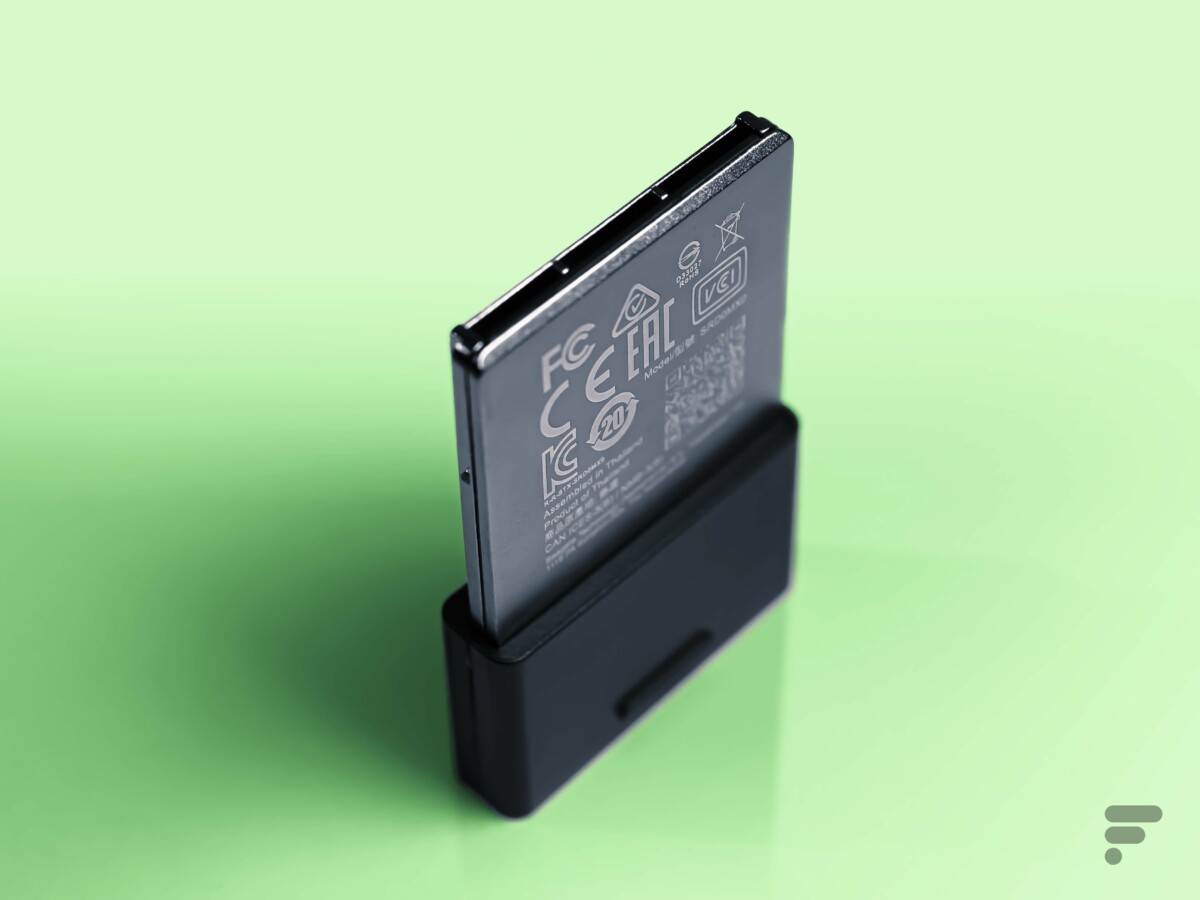 It especially impresses with its small size, similar to that of an SD card with a plastic tip for easier handling. The NAND chip where the data will be stored is protected by aluminum, which will also serve as a radiator. High-performance SSDs today dissipate a lot of heat in operation, so you need to provide a good cooling solution to maintain performance over time. 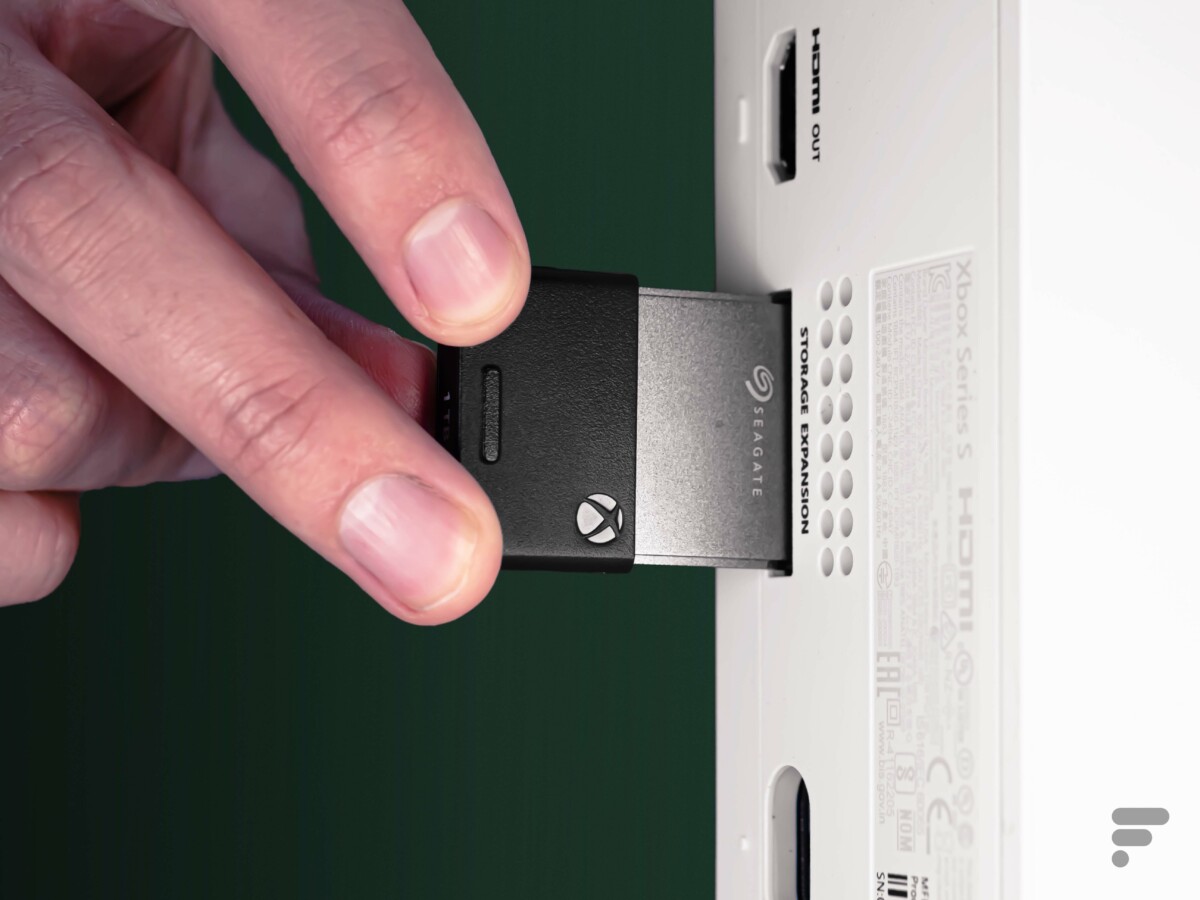 The card fits into the port on the Xbox labeled “Storage Expansion”. A physical locator on the rail prevents it from being inserted in the wrong direction. You can connect or disconnect the expansion card without forcing too much. It’s a detail, but it shows that you can easily detach it and take it with you to go to a friend.

Once inserted, the card protrudes slightly from the console, about 2 cm, so that it can be easily removed by the user.

Once the card is inserted in the console, it is immediately recognized and a notification warns us of the addition of storage space. 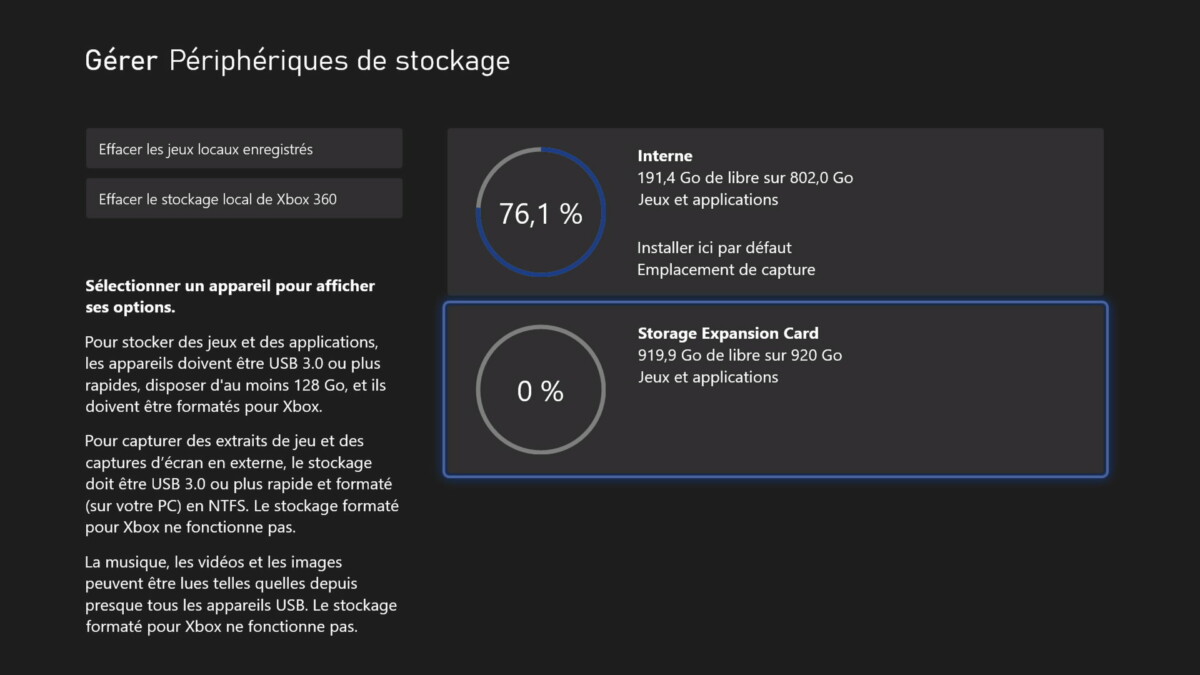 If like the Xbox Series X, the expansion card is sold for 1 TB of storage, we end up with more free capacity. The console offers by default 802 GB of space to install games, as it reserves a part for its operating system and the Quick Resume function. The expansion card does not need this reserve, and therefore offers 920 GB of free space (919.9 GB precisely).

One of its strengths is the very easy installation of this expansion card. No parts to disassemble, or tools needed, we insert the card and everything works from the start. Then all you have to do is install or copy your games.

During our tests, we handled the card regularly, especially because it is designed to be portable and able to be taken everywhere with you. Unfortunately, Xbox Series X has been unable to recognize the expansion card on several occasions. 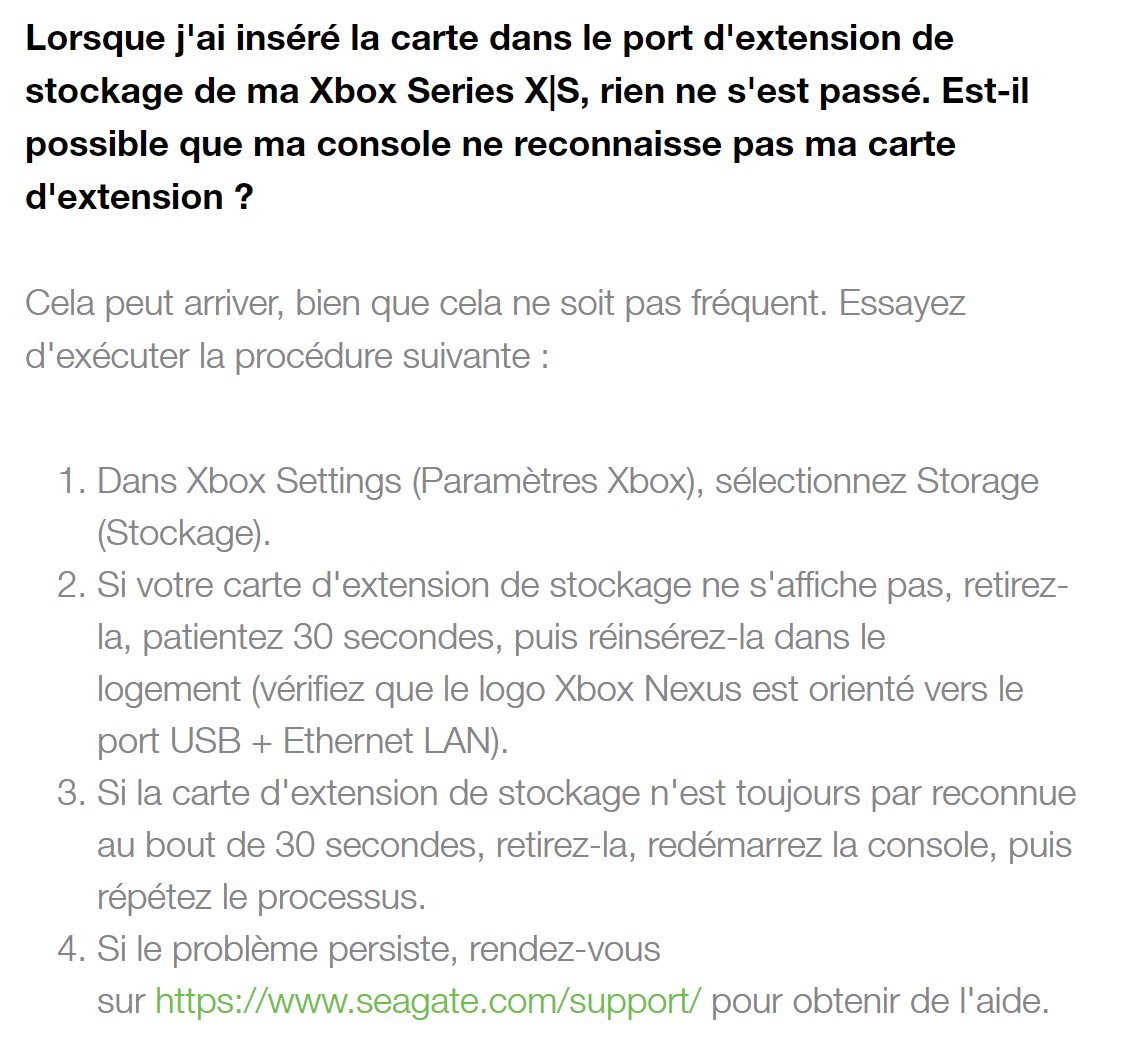 This bug is mentioned on the official Seagate website, which recommends going as far as turning off the console and removing the expansion card for more than 30 seconds. We have solved our problem in this way, but it is not very reassuring about the stability of the system.

The experience is not exactly the same, however. To move the 39.3 GB of Watch Dogs Legions from the internal storage to the card, it took 59 seconds, while the same operation in reverse from memory card to internal storage took 1 minute and 29 seconds. The difference in this operation is therefore particularly noticeable, even if waiting 30 more seconds for a copy of a game is not that serious in itself.

For comparison, I tested with a SanDisk external SSD connected in USB 3.0 on the console. Copying a game to SanDisk USB SSD took 3 minutes and 56 seconds, much longer than using the expansion card. Also remember that it is not possible to launch an Xbox Series S game | X from USB storage.

The most important is in fact the “day-to-day” use of the card, and therefore the question of loading times in games.

From the home screen of the Xbox, and until the final loading of my game in Yakuza Like A Dragon, I had to wait 49 seconds with the expansion card, against 36 seconds with the console SSD . There is therefore a difference of 13 seconds between the two storage media.

We therefore have a nice space to install many games. A number perfectly sufficient to ensure a certain comfort, even when we are used to running games throughout a generation. 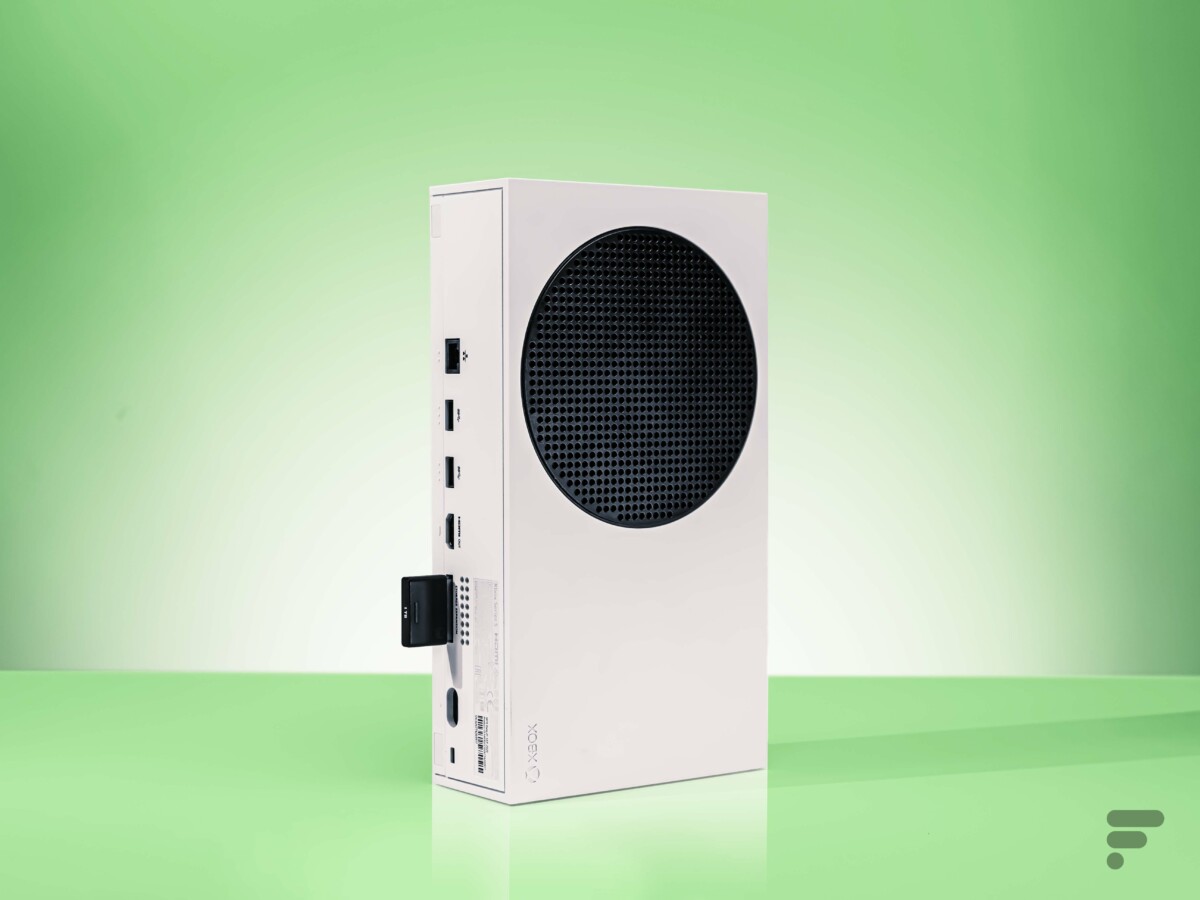 Originally marketed at a price of 269.99 euros, the Seagate 1TB expansion card is now sold by the brand at the recommended price of 249.99 euros. For 1TB flash storage it is quite expensive at a time when we find NVMe SSDs around 100 euros with the same capacity and similar performance. The price difference is explained first of all by the size of the tested object. The Seagate card is much more compact than NVMe PC SSDs. It is also explained by the more complex design of a card intended to be handled regularly: aluminum radiator, small plastic handle, cap.

Finally, there is obviously the question of competition. While we cannot exactly speak of a proprietary solution here, since it is based on CFExpress and PCIExpress, for the end consumer it amounts to exactly this type of solution. The lack of strong competition or a common market for PC components should not make it easy to get good deals or bring the price down quickly. Sony’s solution for the PS5 should therefore be more economical in principle.