You probably know Seat through the many cars marketed under its logo, but did you know that the Spanish firm wants to diversify and invest in mobility in the broad sense of the term? Here is our review of the Seat MÓ eScooter 125 electric scooter. 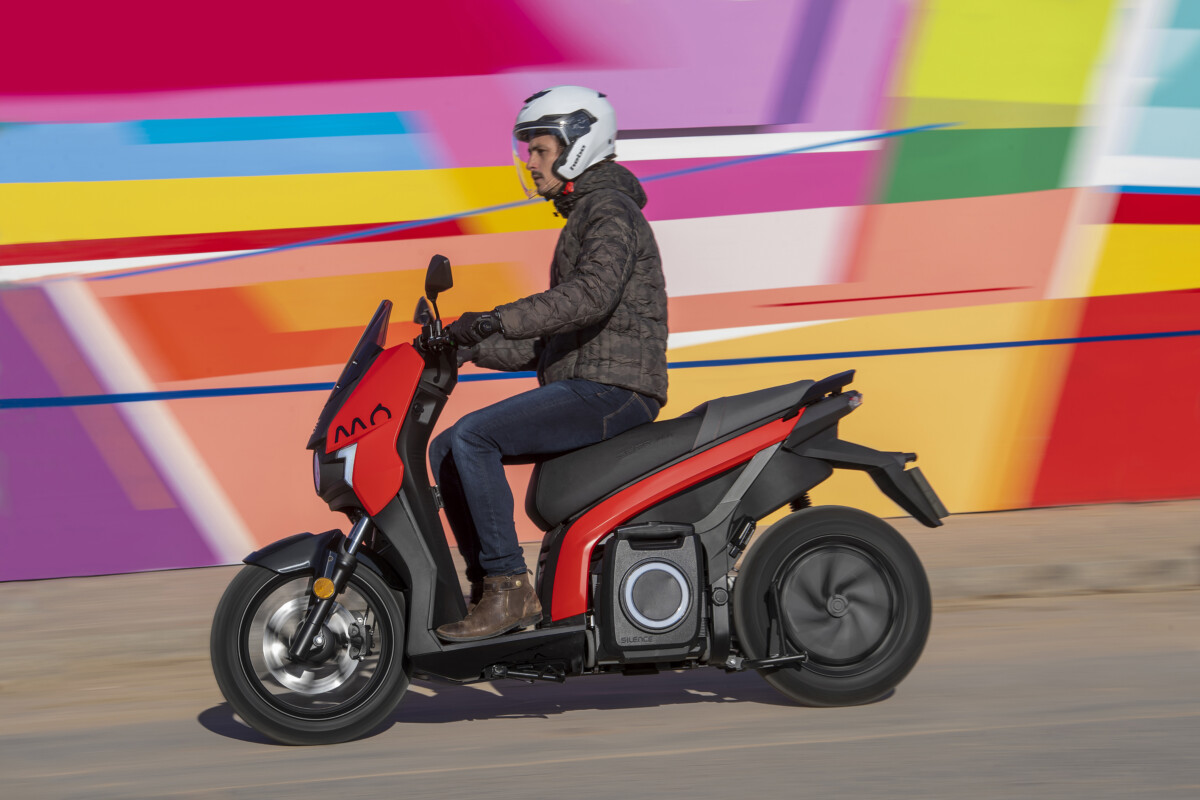 Mobility, in the broad sense of the term, is today a niche in which the major automotive groups, but not only, are rushing in order to offer solutions to new problems in the sector. Within the Renault group, for example, a specific entity, called Mobilize, is dedicated to new mobility. On the Seat side, mobility is also at the heart of the company’s policy, the brand even aiming to no longer be a full-fledged car manufacturer, but a more global player in mobility.

With the eKick 25 and 65 scooters, Seat already offers several alternative mobility solutions. After electric scooters, the brand presents an electric scooter equivalent to 125 cm3 which comes to interfere in a booming segment. The figures are also quite eloquent with more than 25,000 electric scooters sold on the Old Continent last year, and quite stunning forecasts with an eight-fold increase in sales by 2025.

For the moment, these are the 50 cm equivalents3 which occupy the majority of sales of electric scooters in Europe, especially since the expensive BMW C Evolution left the catalog of the firm to the propeller, pending its replacement, less exclusive and less powerful, which should arrive from here a few weeks. 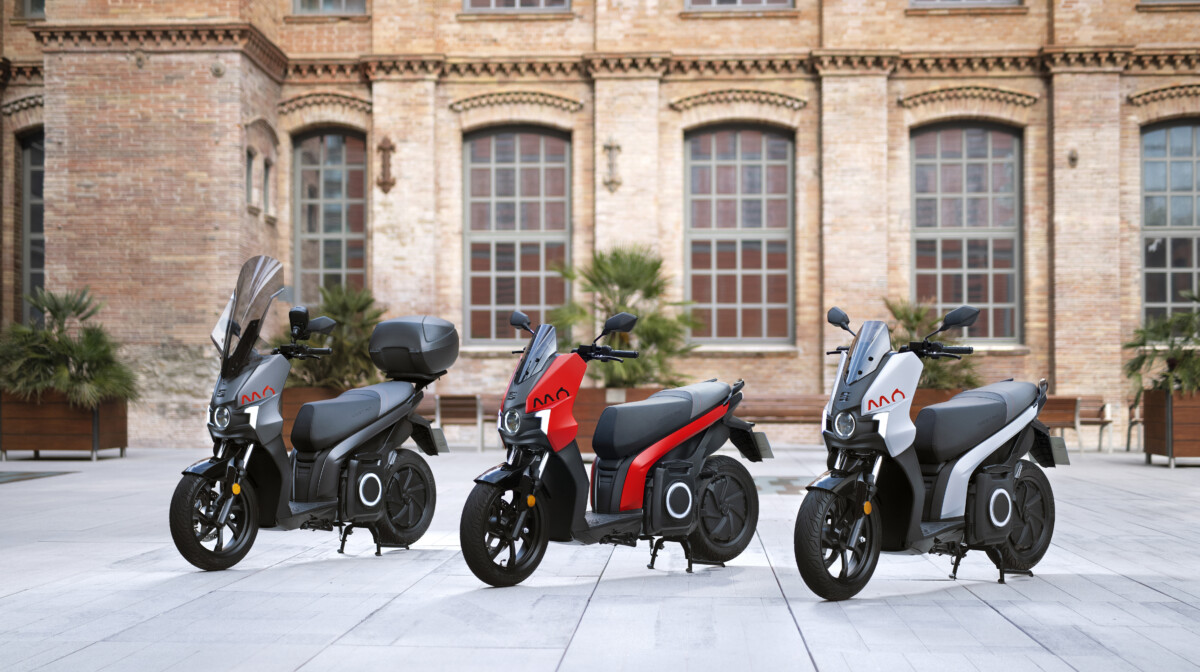 For its Seat MÓ, the Spanish firm did not look very far in terms of development, since it is simply a rebadged Silence S01 model, another Spanish manufacturer whose R&D and production are located in Barcelona. . Aesthetically, the differences are slim between the Silence S01 and the Seat MÓ, or even non-existent, apart from the logos and the three colors available on the Seat (aluminum gray, bold red and oxygen white, count 75 euros for gray and red). In terms of equipment, the Seat MÓ has two USB-A sockets and a hook for the apron, while the 39-liter trunk, located under the saddle, can accommodate a full face helmet and a small jet.

The battery, with a capacity of 5,6 kWh, allows the Seat MÓ to display a respectable autonomy of 137 kilometers according to the WLTP cycle. During our test, we could therefore have covered a few hundred kilometers, which is still rather sufficient for daily journeys in an urban environment, and even a little more if affinity. You can recharge the battery via a socket on the side of the scooter where it can be connected to a mains socket. But if your two-wheeler sleeps in the street, the battery is removable and can be extracted from the side quite easily. It is equipped with two small wheels and a telescopic handle in order to move the 41 kilos of battery without too much effort. Good luck if you live on the fifth floor without a lift, however.

Having a removable battery obviously reduces the risk of theft quite drastically. It will take between 6 and 8 hours for a full recharge. Thanks to an application that will be available next June, it will also be possible to know the autonomy of the scooter, but also to geolocate it and be alerted if the vehicle is moved. In the list of accessories, we find a lot of elements that go with this scooter, starting with the top-case, a specific apron, a smartphone holder and a high windshield.

Comfortable everywhere, all the time?

For our test, we took charge of the Seat MÓ in Paris, where traffic is still difficult, but a little less in the middle of the afternoon. Thanks to its motor, located in the rear wheel, of 7 kW (9.5 hp) or 9 kW (12.2 hp) in “Sport” mode and 240 Nm of torque, the little Iberian scooter sneaks around and gives the impression of being on a bike as it is easy to handle and rather light (155 kilos with the battery), especially when you get out, like your servant, from a thermal motorcycle of more than 200 kilos.

The absence of noise and vibration is a treat in the city, as well for the driver as for the passers-by who do not have to suffer the horrible noise of certain small thermal scooters in full acceleration. With a 0 to 50 km / h carried out in 3.9 seconds, the speed settings are quite correct.

The scooter benefits from three driving modes “Eco”, “City” and “Sport”, the first slightly restricting acceleration and maximum speed (restricted to 85 km / h), while the “Sport” mode is more pleasant on a daily basis with increased energy recovery and sharper acceleration, without leaving anyone at a red light either. The maximum speed is restricted to 95 km / h, but a brief passage on the expressway allowed us, without too much difficulty and without going downhill, to reach 108 km / h, all with good stability.

In terms of comfort, the Seat MÓ does pretty well, but like the majority of small scooters, as soon as the coating deteriorates, it becomes complicated. On the cobblestones of Place de la Concorde, where some holes are really dangerous for motorized two-wheelers and bicycles, our little electric scooter was very dry in compression. 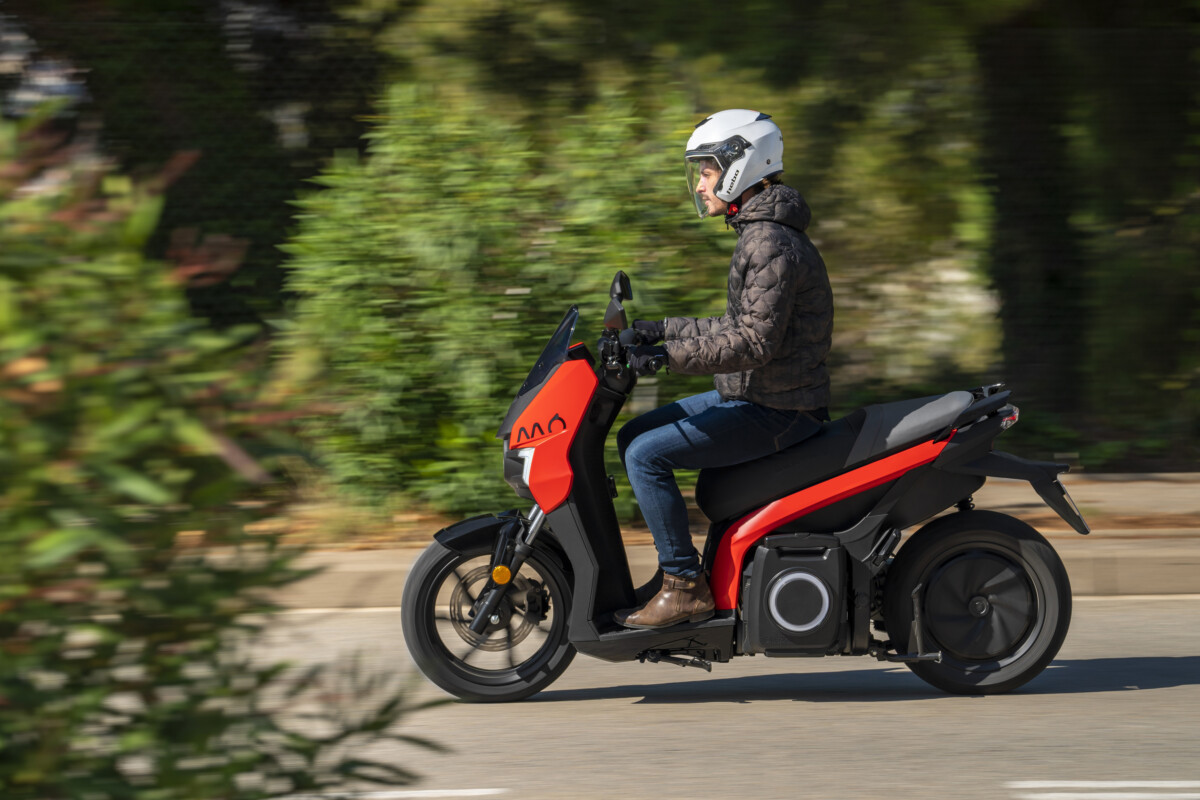 Some flaws, but nothing crippling

Interlocking, the small size of the Seat MÓ encourages you to sneak around, and we sometimes forget that the mirrors protrude more than the handles of the handlebars. Unlike petrol-powered motorcycles and maxi-scooters, mirrors do not go over those of cars. In addition, they are a little too small to have good visibility. Among the other complaints, there is the display of the digital dashboard, with the level of autonomy remaining in large and the speed in very small.

For a 50 cm equivalence3 which is not supposed to exceed 45 km / h, why not, but not for a scooter capable of exceeding the authorized speed limit in town. Another downside, l’absence d’ABS, equipment that is becoming more popular in the 125 cm category3, and which would have its place on this scooter, especially in rainy weather and on cobblestones.

Our test models were not equipped with the highest windshield, the small windscreen was not very useful on fast tracks, the head and shoulders are therefore fairly exposed to the wind. In town, on the other hand, the system of our test models is quite sufficient. To facilitate maneuvering, especially when parking on a slope, the Seat MÓ is fitted with a reverse gear.

It’s rather practical, but a pity that you have to keep pressing the button during the maneuver, especially since it is located behind the handlebars, making it difficult to handle said handlebars when parking. Another slightly annoying detail is the sound of the turn signals, anything but discreet, with a “beep” that seems to come straight from a video game from the early 2000s.

Price and release date of the Seat MÓ eScooter 125

Regarding the financial aspect, the Seat MÓ starts from 6700 euros, from which we must deduce an ecological bonus of 900 euros dedicated to electric two-wheelers. The brand also offers a long-term rental offer through its own financial captive, namely Volkswagen Bank. The scooter is thus accessible from 125 euros per month for 37 months and a limit of 15,000 kilometers, or 5,000 kilometers per year in three years. The first contribution is absorbed by the bonus of 900 euros.

The Seat MÓ will be available from June 9 and will be distributed within the Seat network. A rather surprising distribution process, since the concessions are gradually disappearing from the cities, even where this scooter is to be used. The brand does not plan to distribute its vehicle through two-wheeler dealers, which could seriously complicate sales, where other scooters, starting with the Silence S01, can be found quite easily at a specialized multi-brand dealer, electric or not.

In intramural Paris, there is only one Seat concession left in the 17th arrondissement, while the closest are next to Argenteuil (95), Rueil-Malmaison (92) or Fresnes (94).