Samsung has yet to reveal all the details of its future 2021 TV range, but what it revealed during its online conference for the Consumer Electronic Show already provides a glimpse of pretty things. In addition to improved image quality thanks to Mini LED technology, NEO QLEDs benefit from other interesting software and hardware improvements. 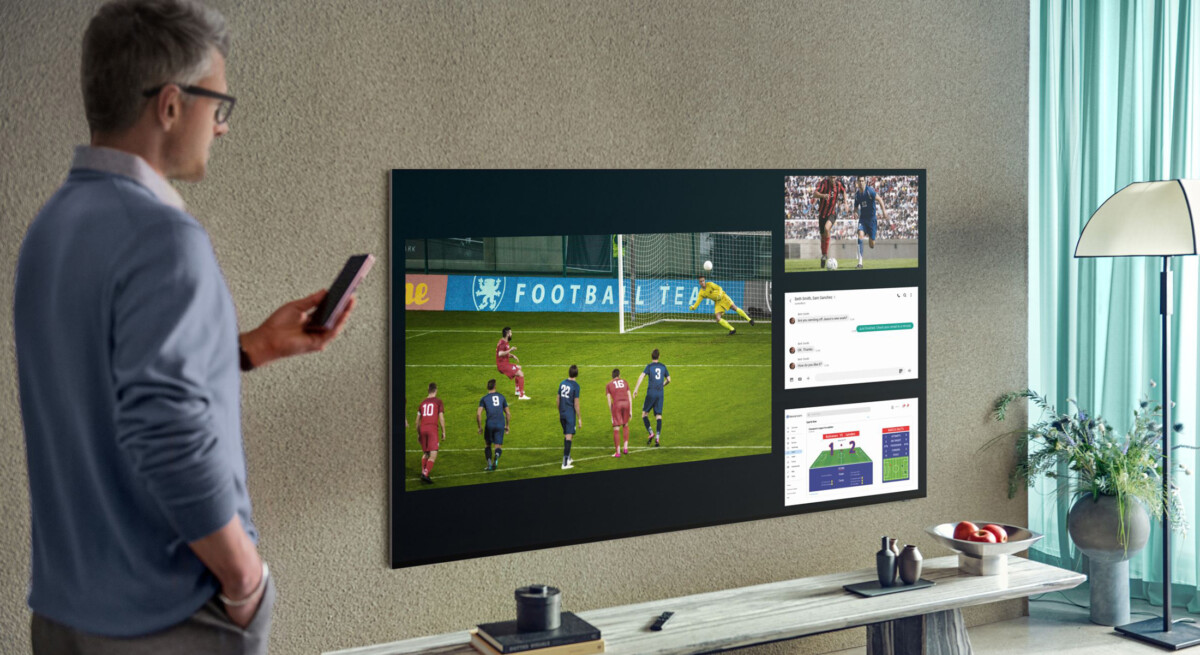 It should come as no surprise, but there are still a lot of unknowns surrounding the upcoming 2021 range of Samsung TVs. However, the main information to remember is that the manufacturer gives birth to the Samsung Neo QLED, LCD televisions using Quantum mini LEDs as a backlight source. You can also read our article on the subject to learn more about this technology that competes with the LG QNED technology announced at the end of the year by the other Korean manufacturer. In addition to this major development, Samsung has already shared other information regarding the improvements made to these televisions. Let’s do a check in.

Remember. Throughout 2020, we have spent our time talking to you in our tests of the famous Film Maker mode integrated by most of the manufacturers in their televisions to produce images in accordance with the wishes and the work of the directors. In parallel to this, we naturally evoked the performance of the image processing processor, essential to improve degraded or lower definition sources with upscaling and company processes. Well in 2021, the tricks of optimizing image quality are not about to end. We will see what the effects will be on the reproduction of our films and series, and there is no doubt that Samsung should let us control whether or not these treatments are activated.

Anyway, on paper, the new NEO Quantum Processor 4K and 8K promise a more precise analysis of video sources, whatever they are (Blu-ray, streaming, etc.), to improve all processing of the image. Samsung mentions up to sixteen different neural networks, each responsible for processing specific data from the source – it’s still pretty vague. One would have suspected it, but he also specifies (in small print) that the Quantum Processor chip will be less powerful on 4K models than on 8K models – including neural networks. Strangely enough, Samsung does not explicitly mention the HDR10 + Adaptive techno, the competing technology of Dolby Vision IQ (in HDR10 sauce therefore), supposed to adjust the contrast and brightness settings according to the ambient lighting in the room. 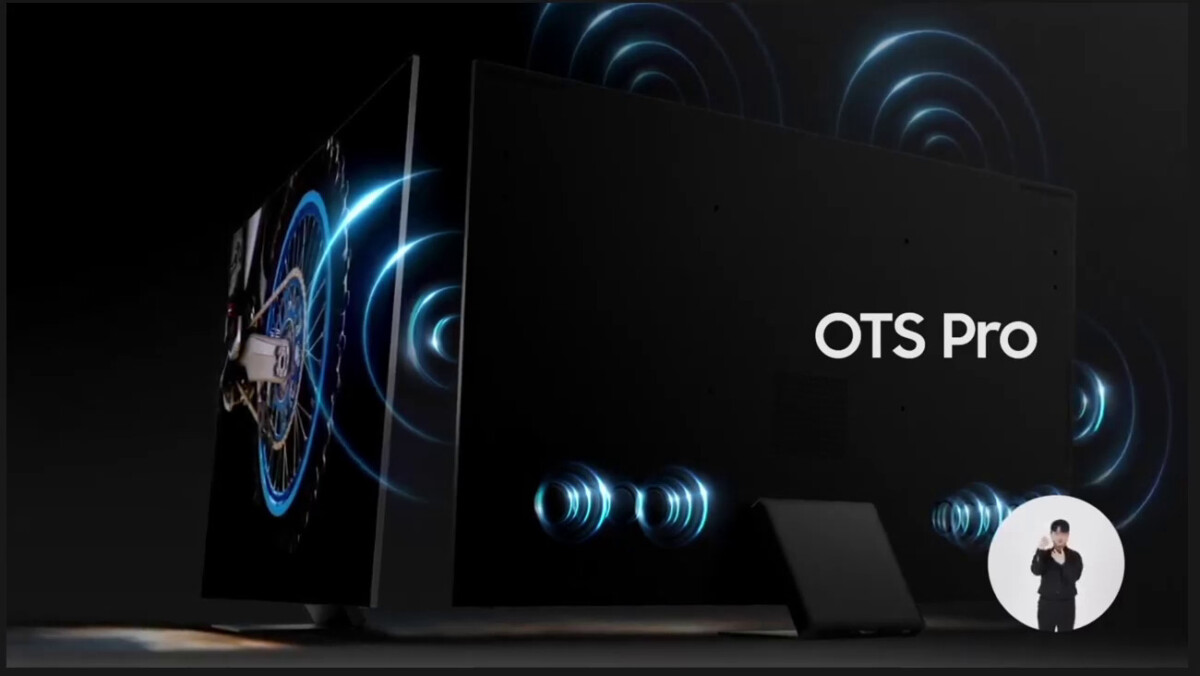 The most high-end televisions will benefit from the new version of OTS +, now called OTS Pro. A 6.2.2 audio system that uses built-in speakers behind the panel and responsible for reproducing the sound where the action takes place. Naturally, AVA (Active Voice Amplifier) ​​technology will always be offered on these models.

Finally, there is also Space Fit Sound technology which adjusts the audio settings of the TV according to the geometry of your room, the furniture and your position in front of the TV. If we are to believe the demonstration video, this technology uses the intelligence of the Neo Quantum Processor, as well as a sensor integrated into the television. We look forward to testing this. On the other hand, Samsung does not mention Dolby Atmos here, but it reminds us that its televisions will be compatible with Q-Symphony technology.

The 8K models in the NEO QLED line will take advantage of the borderless design initiated (Infinity Screen) with the Samsung Q950TS last year. Now, the manufacturer calls this look with almost invisible frame borders “the Infinity One Design”. This results in very thin borders, but also a less important thickness (not communicated) of the chassis made possible in particular thanks to the integration of mini LEDs.

The One Connect box, which we find so convenient for wall mounting the TV, is also evolving. It is now thinner, more elegant. Not really more discreet, because it also seems wider and deeper. However Samsung has obviously found a solution since it is possible to house it at the back of the TV, at the level of the central pedestal. Asked about the question, the manufacturer did not tell us which Ultra HD models would benefit from this new One Connect box.

Gaming, fitness and Google Duo: the consequences of confinement

Among the many improvements made to Tizen OS, there is the possibility of using Google Duo directly from your TV and thus making video calls with your loved ones, on condition, however, to connect a webcam to one of the TV’s USB ports. Samsung even says on-board AI can track the subject in the image by adjusting zoom and framing. A good idea, but we can fear that this is not without loss of quality, linked to the performance of the digital zoom of the webcam itself.

The addition of a webcam will also allow athletes at home to perform training sessions from the Samsung Health application, with one small feature. The TV’s AI will be able to identify your ability to do the exercises presented by the coach well and, where appropriate, will encourage you. Conversely, the penalty will be terrible… or not. What to feel a little less in any case alone in front of his screen and therefore (perhaps) a little more motivated too.

Gamers will also appreciate the new settings menus dedicated to video games. These are grouped together in the “Samsung Game Bar” and offer various settings related, for example, to the image ratio. For example, a player may decide to switch from a 16/9 display to a 21/9 mode, certainly adding black bands at the top and bottom of the image, but in return offering a wider field of view. We look forward to knowing more about this game bar on which also appear other intriguing indications such as “input lag or FPS”. Is it an option to adjust these settings or is it just performance monitors like you find in PC monitors? In any case, all this looks like an exclusive and new interface in favor of Samsung.
These televisions will naturally be HDMI 2.1 compatible with the full range of associated technologies (4k @ 120 Hz, 8K @ 60Hz, VRR, ALLM and e-ARC) without forgetting the FreeSync Premium Pro certification. Too bad, Samsung does not report an official certification with NVIDIA GSync technology – even if for its part Nvidia has worked on Adaptive Sync to discuss all these variations of VRR.

Other novelties are to be discovered within this new version of Tizen OS, which will also use Samsung Multiview technology. This one had already seduced us in its previous iteration that we presented here in detail. Features are evolving and Samsung is pushing this feature even further. Containment has resolutely pushed people to consume and share their content differently and Samsung has understood this. Marketing discourse is adjusted accordingly.

So far this is what we could tell you about these new televisions which, for some, will be accompanied by a solar remote control. This is, in our opinion, the highlight of the show, especially since Samsung seems visibly determined to reduce its ecological impact linked to the production and marketing of these televisions. This goes through different processes that we detail in this other article. We salute the effort!