In loss of speed, Intel was facing very high stakes at this CES 2021. The firm wanted to reassure as much about its future as possible and has multiplied the announcements. 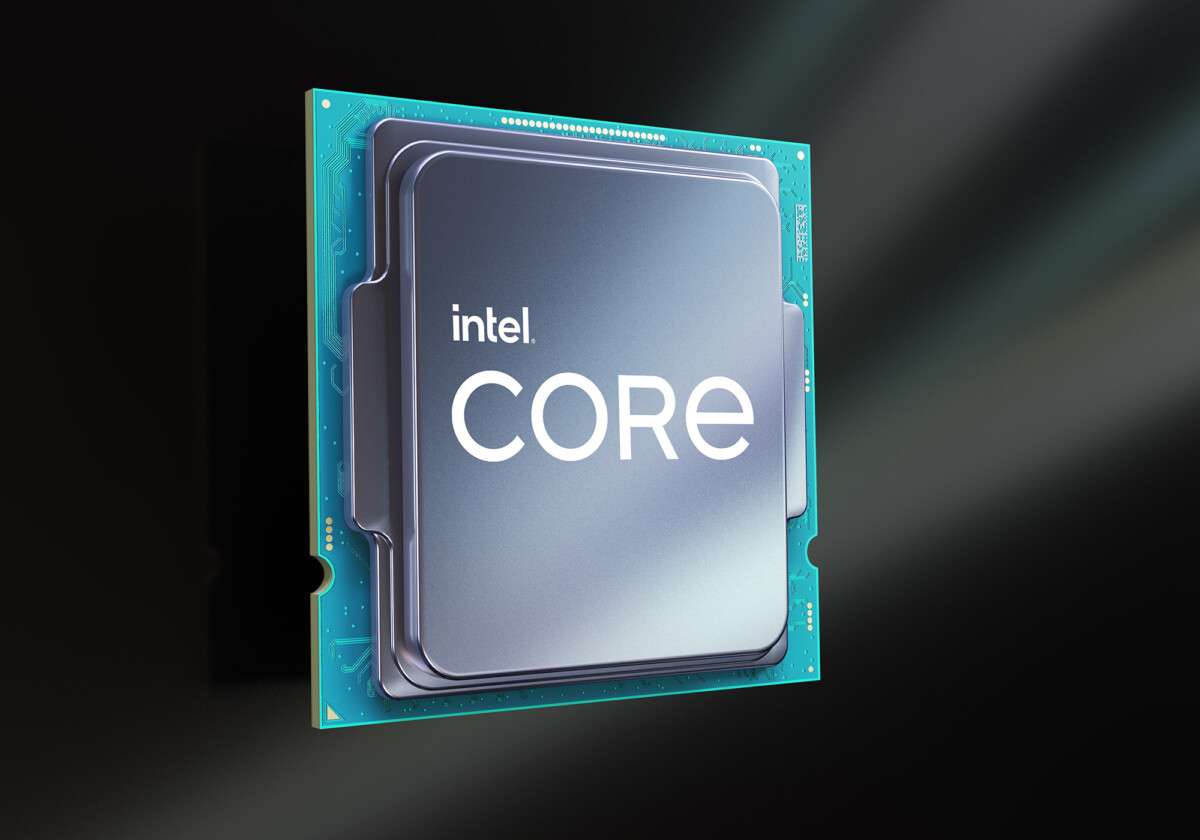 After many years of being an undisputed benchmark in the processor market, Intel is going through tough times. The firm is indeed facing the return of AMD, which now offers very competitive Ryzen processors in the Windows world, but also a rise in ARM in the mobile segment and at Apple. In addition, Intel has experienced difficulties in recent years in carrying out its projects and finding relevant growth drivers. The brand was routed for a long time on the 10nm and sold its 5G modem business, in particular.

At CES 2021, Intel therefore had a big job ahead of it, and it therefore multiplied the announcements for its conference. One of them is particularly aimed at Apple and ARM.

The first important announcement, it was expected, is that of the arrival of 11th generation processors on desktop PCs. Rocket Lake-S processors continue where Tiger Lake started at the end of 2020, and in particular rely on better performance on artificial intelligence algorithms, but also an IPC gain of up to 19% (instructions per cycle). Attention, unlike their cousins ​​on laptops, Rocket Lake-S processors still use the 14nm process.

Rocket-Lake S processors use the Cypress Cove architecture, a work done by Intel to bring news from Sunny Cove (the architecture of mobile processors) to a 14nm process, by increasing the size of the cores and the consumption of energy.

Without announcing in detail the range of processors that will soon land on desktop PCs, Intel presented the first of them: the Intel Core i9-11900K. 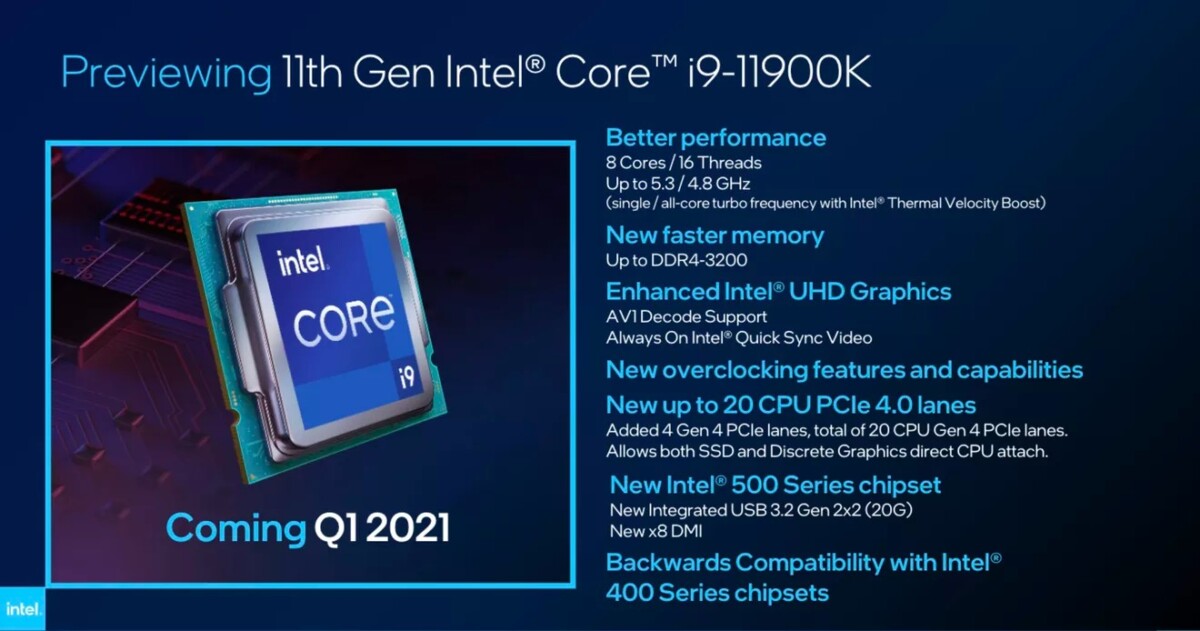 This new processor integrates 8 cores and 16 threads, against 10 cores for its predecessor Intel Core 10900K, due to the enlargement of the size of the cores. The frequency is quite high, from 4.8 to 5.3 GHz. Above all, it is with this processor that Intel will finally support PCI Express 4.0 with 20 lanes, which should increase the interest of NVMe SSDs using these speed levels. We will therefore have 16 lines for the GPU, and 4 lines for an SSD. It will not be necessary to rely on two M.2 PCI Express 4.0 ports on the most accessible Intel 500 motherboards with this generation.

Intel also had a few new things in stock for laptops. This time we are not talking about ultraportables, which are equipped with U series processors, but rather high-performance PCs with their H series. The latter goes to the 11th generation and Intel wants to make it the ideal solution for gaming PCs against AMD . For this, Intel is firstly relying on its switch to PCI Express 4.0 to provide access to faster storage and better graphics chips, but also to Wi-Fi 6E powered by its Intel Killer cards. Wi-Fi 6E promises thanks to its 6 GHz frequency band to offer higher speeds, and lower latency. 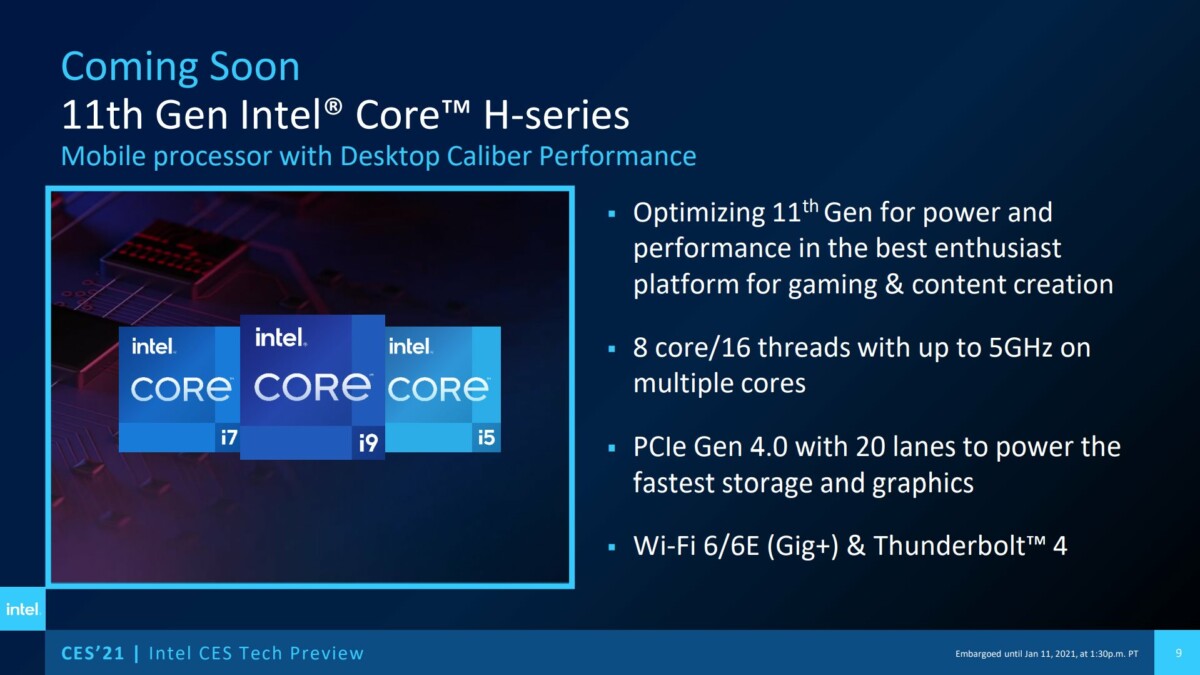 As with the Tiger Lake-U, the Thunderbolt 4 will now be in the game. It should allow work to continue on faster external graphics solutions. It is to date the best possible connection on a PC, and a real asset for Intel against AMD while waiting for the arrival of USB4.

These processors will be well produced using Intel’s 10nm SuperFin process, and are expected to start production in Q1, to land in laptops from Q2. Among the interesting new features, we can mention the management of the Resizable BAR of the PCI Express standard, which we know from AMD under the term “Smart Access Memory”. To put it simply, it increases performance thanks to better communication between the processor and the graphics chip. Intel announces that it has worked with Nvidia for this integration. The enemy of my enemy is my friend as they say.

Intel Alder Lake: the answer to ARM and Apple

Intel ended its CES 2021 conference with a small teasing of his future. According to the firm, it will materialize before the end of 2021 and will go by the name of Alder Lake. This new generation is according to Intel “ a significant breakthrough for the x86 », Because for the first time it combines cores geared towards more performance, with cores geared towards saving energy. It is a solution that the ARM world knows by heart, and which is used today in smartphones, tablets, but also MacBooks in the case of Apple. 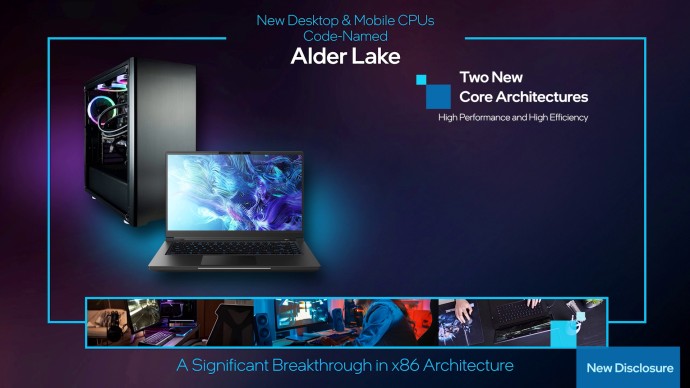 Intel wanted to be confident about this announcement, and presented a first desktop PC equipped with a processor and capable of running Windows 10. An encouraging first prototype for a release planned this year.