Renault is expanding its range of electric cars with the eagerly awaited Electric Twingo. But does it have a card to play in the face of formidable internal competition made up of the serious Renault Zoé and the very economical Dacia Spring? 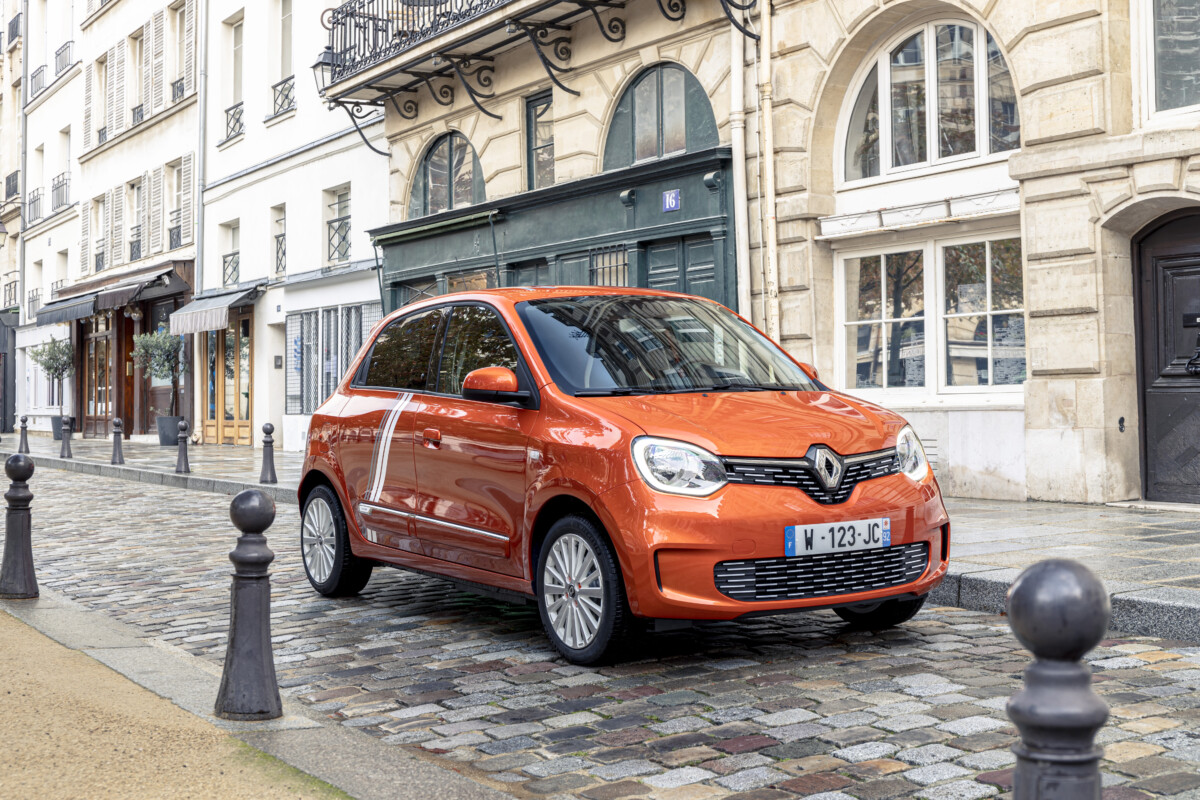 The Renault Twingo Electric in the streets of Paris // Gamesdone: Jean-Brice Lemal for Renault France

Contrary to what one might have thought, Renault did not necessarily first think of its Twingo to embark on the field of electric cars. The electric Twingo arrives even late, very late, since the car was already almost ready for seven years with the Twin’Z concept car presented in 2013. With this strategy, Renault may not have wanted to cannibalize the Zoe market, nor that of the Smart EQ, co-developed with Renault by Daimler, and which generally takes up the technical bases of the small Twingo.

The problem is that by arriving so late on the market, the Twingo must already combine with fierce competition, especially internally, with the Zoe in particular, because we will see it a little lower, but the final prices are not that far apart between the two models, unlike what the brand displays. The Dacia Spring, which has just been presented, is also a major competitor since it should be displayed around 10,000 euros once the ecological bonus is deducted, and its technical sheet is just as interesting, if not more, than the Twingo.

With a starting price of 21 350 euros, the Renault Twingo Electric is not necessarily cheap. The bonus applicable to electric cars in 2020 is up to 7,000 euros, but within the limit of 27% of the price of the new car. Therefore, for a Renault Twingo Electric with the “Life” trim level of 21,350 euros, the bonus will amount to 5,764 euros. At this price, the services are almost indigent with the absence of radio or air conditioning as standard. Petty for such a sum.

Customers will therefore be more fond of intermediate and high-end levels. It will therefore take around 18,000 euros for a mid-range “Zen” Twingo Electric, once the ecological bonus has been deducted, and around 19,500 euros, again with a bonus deducted, for a high-end “Intens” model, ie at a few hundred euros close, the price of a thermal Twingo with a 95 horsepower engine and automatic transmission.

Unlike the Renault Zoé in its early days, there is no question of battery rental for this Twingo. The prices therefore seem rather contained for a new 100% electric car, in particular thanks to the bonus. Except that, as we will see below, the services are not necessarily as complete as a Renault Zoe. And there is going to be a problem since this same Zoe, yet displayed 10,000 euros more on paper, benefits on the one hand from the maximum bonus of 7,000 euros, but also from a more generous commercial discount, which seriously brings it closer to the Twingo.

To make matters worse for Twingo Electric’s business, in terms of rental, the monthly payments are very similar since a Twingo Electric in “Zen” finish is displayed from 317 euros per month, against 352 euros for a Zoe R110 “Zen »(LOA over three years with 30,000 kilometers). The Renault Zoé benefits from a better residual value, which allows it to post favorable rents. Furthermore, the Zoe has a range with a single charge that is twice as long as the Twingo Electric, which certainly largely justifies the few dozen additional euros claimed per month. 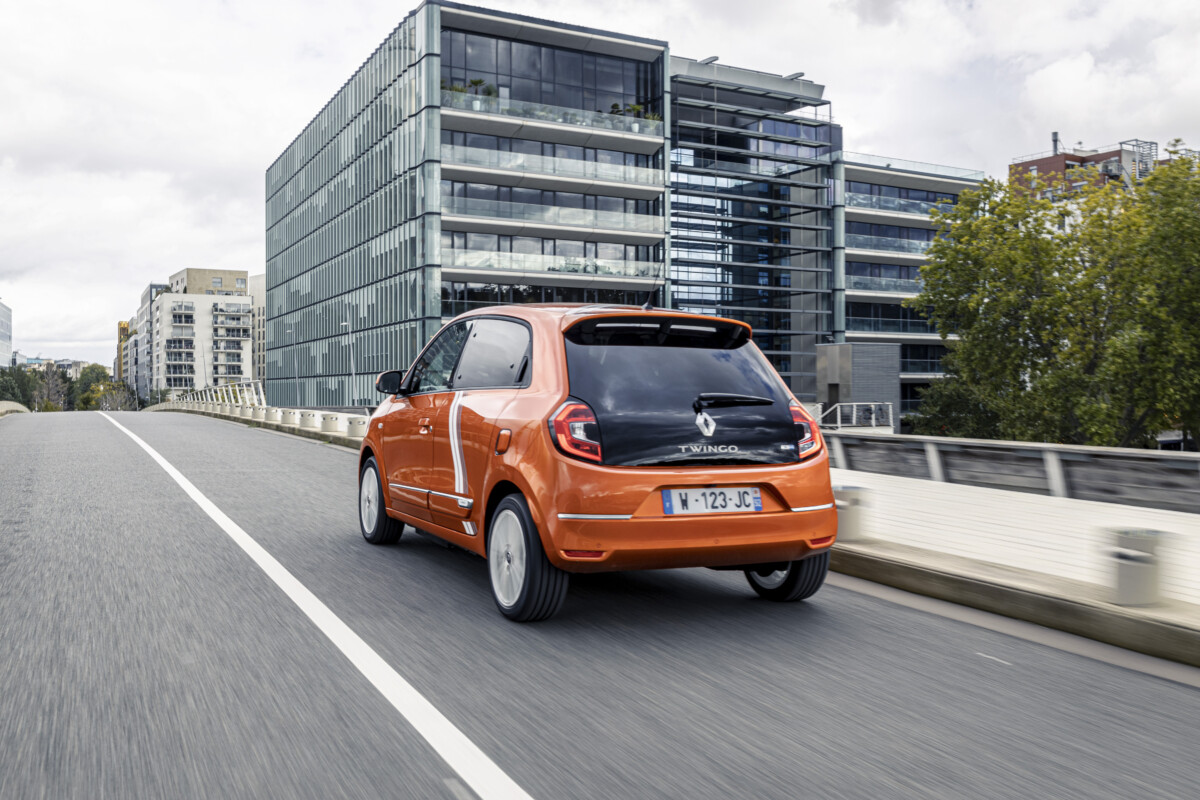 The Renault Twingo Electric in the streets of Paris // Gamesdone: Jean-Brice Lemal for Renault France

The Renault Twingo Electric in a few figures

The Renault Twingo Electric therefore yields valuable points in the economic field, but will it make up for it on the road? Chances are, since it retains everything that made it successful, starting with its contained dimensions, 3.62 meters in length, 1.65 meter in width and 1.56 meters in height. The boot space remains the same compared to a thermal Twingo and claims 240 liters, except that you will have to add the charging cables if you transport them. In this case, the trunk capacity will be slightly hampered. With its turning diameter of only 8,6 meters, the Twingo is still just as comfortable in an urban environment.

Technically, like its thermal cousin, the engine of this Twingo is placed at the rear axle. The electric block develops 81 horses and 180 Nm de couple. This is a block derived from the one that equips the Zoe, again her. The electric version of the Twingo takes around 197 kilos (including 165 kilos of battery) compared to its thermal counterpart to peak at 1111 kilos, which is still quite light for an electric car today. The 0 to 50 km / h is announced in 4.2 seconds, the 0 to 100 km / h in 12.9 seconds and the maximum speed at 135 km / h.

If the engine is a derivative of that of the Zoe, the battery is not since it has a capacity of 22 kWh (including 21.3 kWh useful) against 52 kWh for the Zoé. The battery is made by Renault and the cells come from LG. The Twingo does better than its technical cousin, the Smart EQ and its 17.6 kWh.

In terms of autonomy, Renault announces 190 kilometers in mixed use according to WLTP standard, and even up to 270 kilometers for exclusively urban use. It’s half as much as the Renault Zoé, but it’s also worse than another trio of competitors, namely the Škoda Citigo i eV, Volkswagen e-up! 2.0 and Seat Mii electric, three cars equipped with a 32.3 kWh battery and claiming around 260 kilometers of range under the WLTP cycle.

Regarding charging, you will be entitled to the same connector as the Zoe with a Type 2 plug. There is no Combo connector for fast charging, charging power rises to 22 kW thanks to three-phase alternating current. To recover 80% of the battery, Renault announces that it will take about an hour, or about 150 kilometers. On a classic domestic socket, it takes 15 hours, 8 hours on a reinforced socket and 4 hours on a Wallbox.

Nice to drive this Twingo?

On paper, the Twingo Electric blows hot and cold, both from a financial and technical point of view. Fortunately, behind the wheel, the little French girl is doing pretty well, much better than its thermal variant. Gain too pronounced, trunk often too hot because of the location of the engine … These are the main faults that one could blame the Twingo gasoline.

The electric version corrects all these faults, in particular thanks to its battery pack placed under the floor which lowers the center of gravity and in a way sits the car on the road. The result is convincing with a car that is very fun to drive, agile in the city and dynamic when relaunching, even on the secondary network. The comfort is a little worse than on the gasoline Twingo, but nothing prohibitive overall.

We completed a course of about 100 kilometers to take control of this Twingo. The results of the races are rather convincing with an average consumption of 14.6 kWh / 100 kilometers, without practicing eco-driving and without activating the “Eco” mode, which restricts performance and which saves about fifteen kilometers in total autonomy.

However, as you can imagine, it is difficult to imagine doing the road with such a limited range and a load capacity limited to 22 kW. The Renault Twingo Electric will therefore be confined to daily use oscillating between city and countryside., while recharging at home or at work in order to constantly avoid the hunt for terminals and the disappointments that may arise with it, that is to say: out-of-service stations, places occupied or charging power too low . Not to mention the density of the charging network in France, which is still too limited.

Inside, the Twingo Electric doesn’t really stand out from the thermal model. The quality of the materials is decent for a city car and the equipment rather complete on the highest finishes, with a convincing seven-inch screen infotainment system and compatible with Android Auto and Apple CarPlay. The dashboard also has two USB ports.

Connected navigation-related services include the updating of routes by integrating real-time traffic, Google search for destinations or points of interest, weather information for the route and automatic and regular update of all functions and services.

Renault also offers the MY Renault mobile application. Thanks to it, the driver can send his destination to his car directly from his smartphone, continue his journey with a pedestrian route once parked and easily find his car thanks to the “Find My Car” function. Navigation is enhanced with the possibility of having the field of action of the car in real time, in Standard mode and in Eco mode. The map also displays charging stations with their updated availability. A planner for long journeys is also available to optimize your journey according to the location of the charging stations on your route.

It is also possible to program the charging of your vehicle, for example, to take advantage of off-peak hours or to start or program the temperature of the passenger compartment when it is being charged. Thanks to this preconditioning, the interior of the car will already be at the right temperature when the driver arrives. The application also makes it possible to pay for recharges at public terminals via a pass payment, which is rather smart to avoid the multitude of subscriptions depending on the different terminals used.