Some of Apple’s most popular products are currently on sale on Amazon. Whether it’s the new MacBook Air with its Apple M1 chip, the classic iPad or the 2020 version of the iPhone SE: they are all at a reduced price on the American giant’s platform. 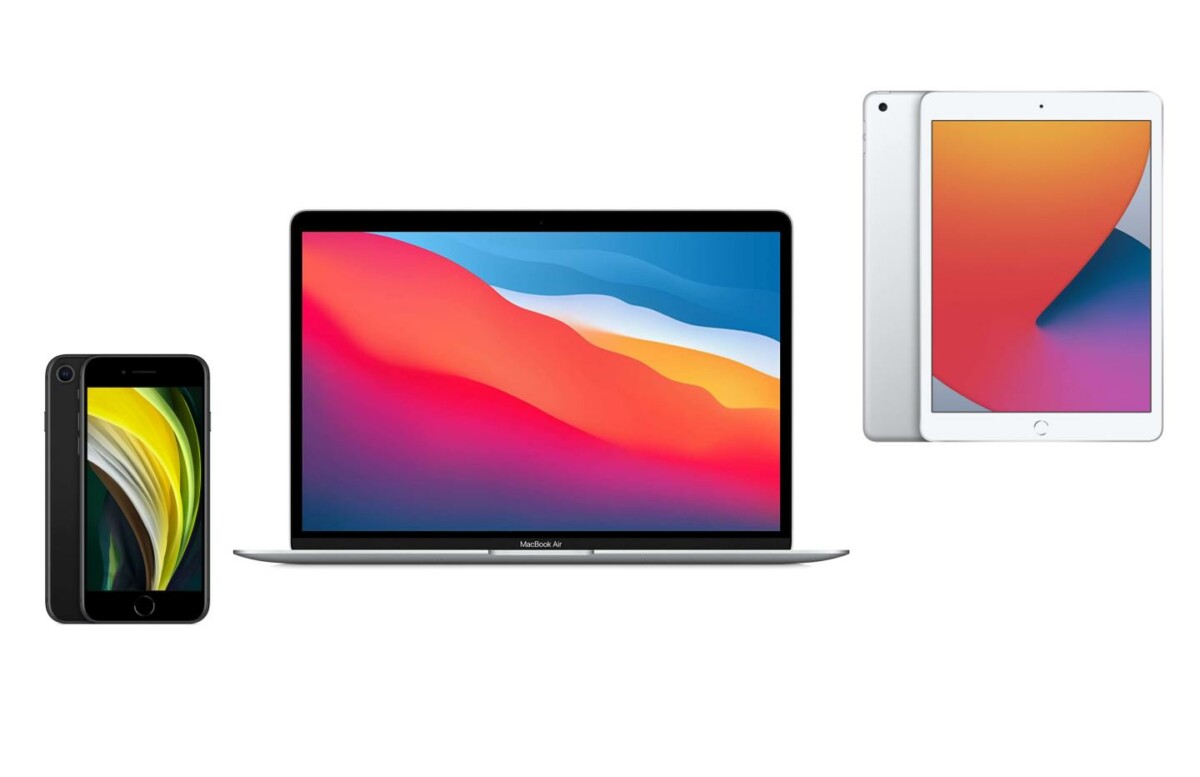 Apple products are very rarely on sale, whether they are very new or almost a year old. You should therefore not generally miss an opportunity to equip yourself at a reduced price and that is precisely what offers Amazon today through three particularly interesting offers.

The iPad of 2020 does not change much compared to that of 2019. Aesthetically speaking, it is almost impossible to tell them apart because they are so similar. Both offer this authentic Apple design with wide borders around the screen and a Home button equipped with Touch ID on the front.

We also find the same format as before with a Retina screen (True Tone compatible) of 10.2 inches and, therefore, an identical size with a tablet not exceeding 500 grams on the scale. More anecdotal, we note the presence of the same 8 megapixel camera duo at the front and at the back, enough to make a FaceTime from time to time.

The main difference with the 2019 model comes from the integrated chip inside Apple’s affordable tablet. Formerly in the company of the A10 Fusion, this year’s new iPad resonates in duo with the powerful A12 Bionic SoC, which equipped the iPhone XS and XR. It thus gains in performance with a 40% improvement in its CPU, twice as much power for its GPU for game graphics and a neural engine capable of processing 5,000 billion operations per second.

Autonomy is still estimated at around ten hours, rechargeable via the good old Lightning port. The same versatility is also found in the use of the tablet with the possibility of connecting a keyboard via the Smart Connector and using the first generation Apple Pencil. It is obviously still possible to transform the tablet into a real game console by connecting an Xbox, PS4 or MFi certified controller via Bluetooth. A feature that makes perfect sense with Apple Arcade.

Instead of the usual 389 euros, the Wi-Fi + 32 GB storage version of the Apple iPad 2020 is today on sale at only 364 euros on Amazon. The tablet is only available in silver color at this price.

The iPhone SE 2020 is a smartphone that pulls the rope of nostalgia by signing the return of the classic design of Apple smartphones post 2017. It has the tunes of iPhone 8 with chunky borders at the top and bottom of its 4.7-inch Retina screen (TrueTone compatible), not to mention the famous Home button equipped with Touch ID.

That being said, that doesn’t stop it from being a good smartphone. Under this small size hides the powerful A13 Bionic chip, the same that powers the various iPhone 11, 11 Pro and 11 Pro Max. A configuration that remains very efficient in 2021 to ensure a smooth user experience on the one hand and to run many 3D games on the other.

It also surprises with its autonomy despite its very small size. Its 1,624 mAh battery seems to be limiting on paper, but iOS optimizations actually allow it – and to our surprise – to take an entire day away from the charger. Plus, wireless charging is even part of the game.

Finally, the iPhone SE does not promise great versatility with its 12-megapixel mono photo sensor. However, this device has already proven itself on the XR for capturing pretty and finely detailed shots. Some possibilities are still there: portrait mode, Smart HDR, video in 4K at 60 fps, etc.

The MacBook Air M1 retains the excellent design of its predecessor. We then find the same aluminum frame, the same keyboard and the same 13-inch Retina True Tone screen, in an almost identical format. With the naked eye, you won’t see the difference between the two. However, the panel has the particularity of being compatible with a wide range of colors, which is more appreciable for photo and video editing.

The main difference comes from the computer components used, and more precisely the processor. Apple replaces the Intel Core with its Apple M1 chip, based on an ARM architecture (like the iPad and iPhone). This change simply improves the performance of the machine, as well as its autonomy. The power is then estimated 3.5 times greater than the old models, with endurance which now goes up to around 15 hours.

This new architecture, on the other hand, brings about a mandatory rewrite of the applications. Some are directly compatible, but to use your old X86 software, you will have to emulate them via Rosetta 2. The result is very convincing, even faster than with an Intel configuration. Very reassuring for the future, because it would have been a real problem to have so much power not to use it.

Another notable fact: this MacBook Air M1 dispenses with fans. Today it is one of the quietest ultraportables around. Finally, note that it has a 256 GB SSD, advertised as twice as fast as the old generation, and 8 GB of RAM to complete the whole.