Philips OLED 806 and 856, Mini LED 9506 and 9536 or even The 8506 … the manufacturer has just presented its new TV ranges for 2021. If all the details are not yet known, this year Philips will play on the tables by ensuring a rather interesting minimum service. 4K at 120Hz and a latest generation P5 processor are key elements. 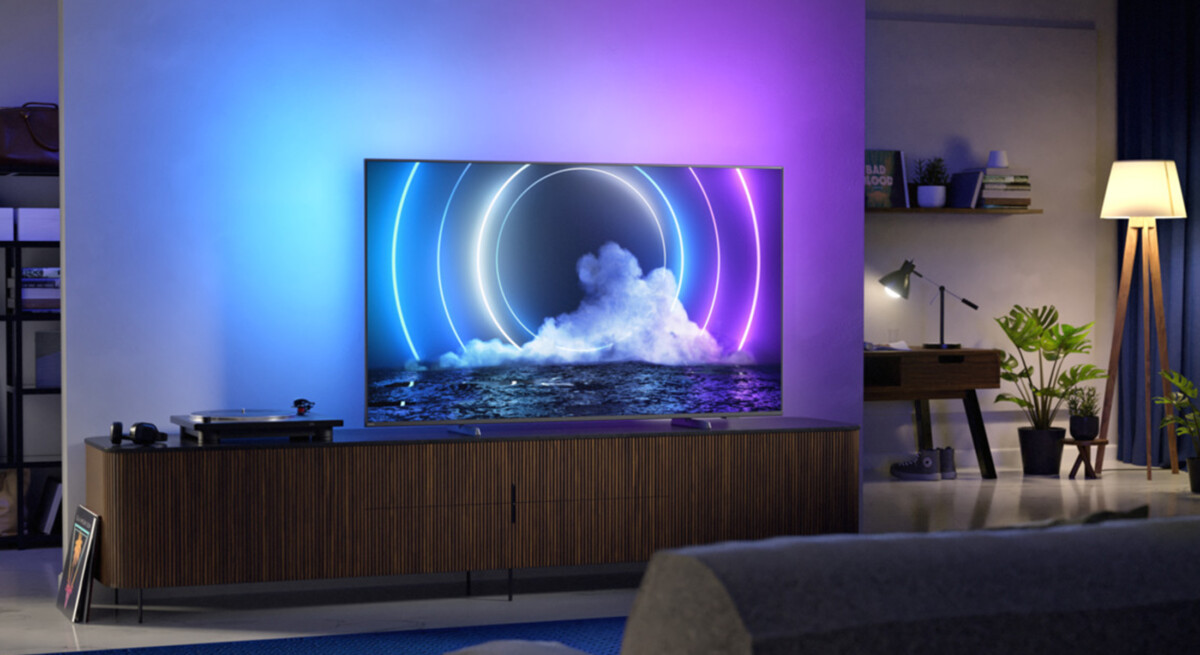 It is done ! The novelties from Philips that we expected have fallen! The manufacturer, a subsidiary of the TP Vision group (based in Amsterdam), had decided not to make its announcements as part of a virtual CES, but to organize its own event on January 27. An equally digital meeting, during which the firm unveiled its wide range of televisions for this year 2021. And as we will see, Philips is betting on all the horses.

Did you dream of it? Philips did. If we deliberately divert this advertising slogan initially associated with the Sony brand, it is indeed to mark the fact that the Japanese manufacturer is now one of the only TV giants (with Panasonic, another Japanese manufacturer) not to have advertised LCD televisions using Mini LED backlighting. At Phillips, these new LCDs using backlighting through Mini LEDs carry the references 9506 and 9636 with, for each of these ranges, 65 and 75 inch models. No price is announced for these so-called “premium” products, but the choice of these large diagonals suggests that they will not be accessible to a large clientele. 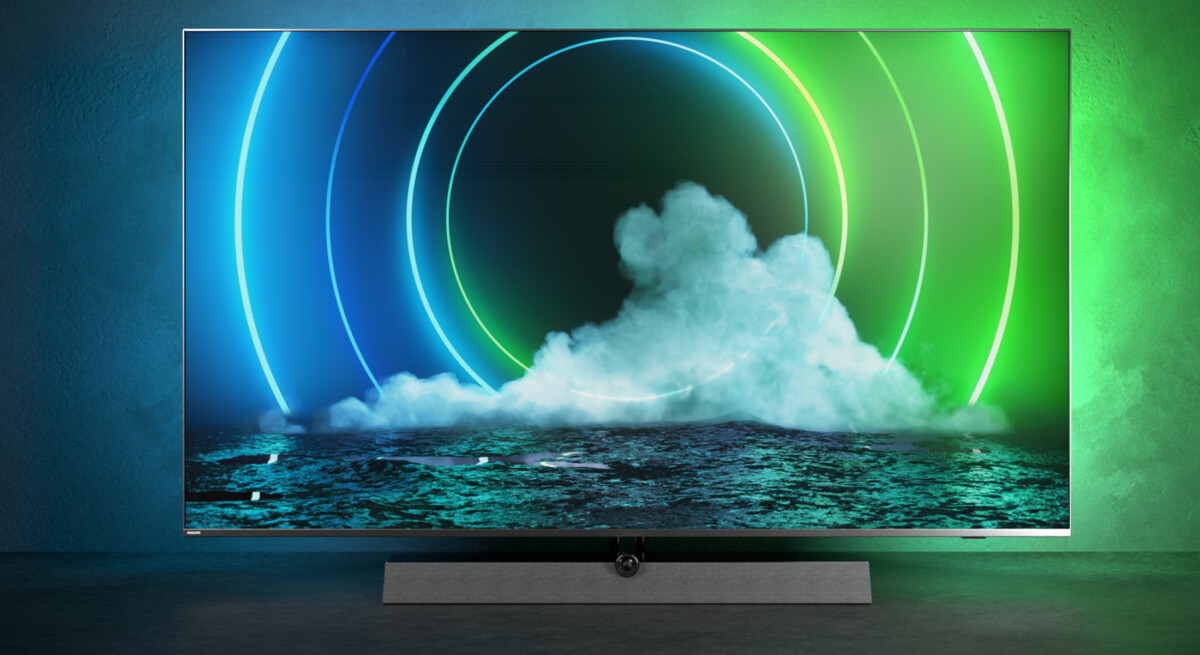 The most upscale 65 and 75 inches will therefore be grouped under the Philips 9636 Premium reference. And “premium” is also the name given to this mini LED backlighting system which is here composed of 1024 zones of micro dimming sIt has an ability to master brightness and contrast never before seen on a conventional LED-backlit LCD TV. Philips does not give more details on the number of integrated mini LEDs or even their size, but on the other hand it does mention a peak in brightness of 2000 nits. On paper, this is not a record, but given the expected contrasts, the image should not lack panache. 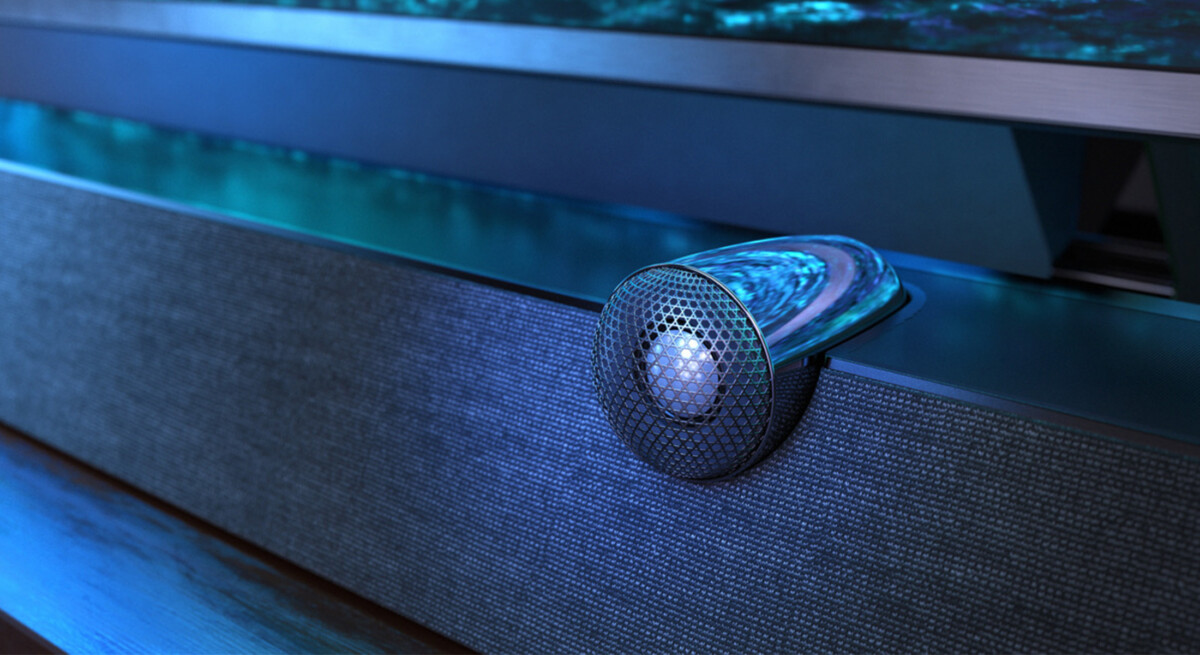 The “tweeter on top”, a hallmark of B&W systems

Philips also promises that the VA-type LCD panel will provide a wide viewing angle and 95% coverage of the DCI-P3 color space. Again, on paper, nothing really revolutionary, but we can’t wait to test it all!
And to hear them too! The mini LED 9636 models stand out with their Bowers & Wilkins branded sound bar, now a long-time partner on Philips Premium models. We do not yet know the power of this sound bar, but it is specified that it is a 3.1.2 system with Dolby Atmos reproduction. There is also the famous “Tweeter-On-Top” which provides the central channel and which is THE trademark of B&W. Note that the sound bar acts as a very nice stand for televisions, but of course it is possible to hang these products on the wall. 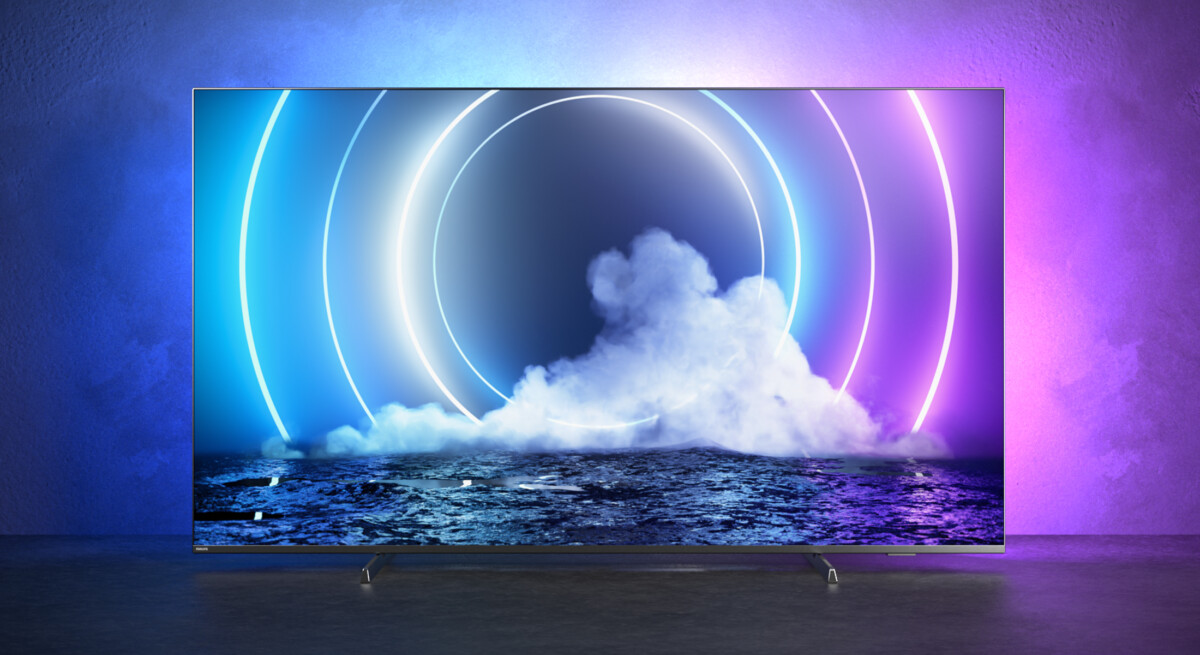 The 9506 in 65 and 75 inches will therefore be the more “affordable” models. Exit the sound bar and return to an integrated system, nevertheless 2.1 promising a power of 50 watts. The manufacturer does not indicate here the number of zones for this system « micro dimming pro » (and no longer Premium) and the light output would be 1500 nits. The design otherwise seems more classic, with two metal legs that could pose some problems for anyone who wants to place a soundbar in front of the TV.

Finally, there are common points on these two ranges of televisions and they are more or less favorable to this 2021 collection. Indeed, we learn that these mini LED televisions are compatible HDR10, HDR10 +, HDR10 + Adaptive, but Dolby Vision compatibility seems to have disappeared. This is unfortunate and we are awaiting clarification on this point from Philips. He may have made the savings of this Dolby license in favor of support for HDR10 + Adaptive which promises to do the same thing as Dolby Vision IQ by adjusting the picture settings according to the ambient light in the room. 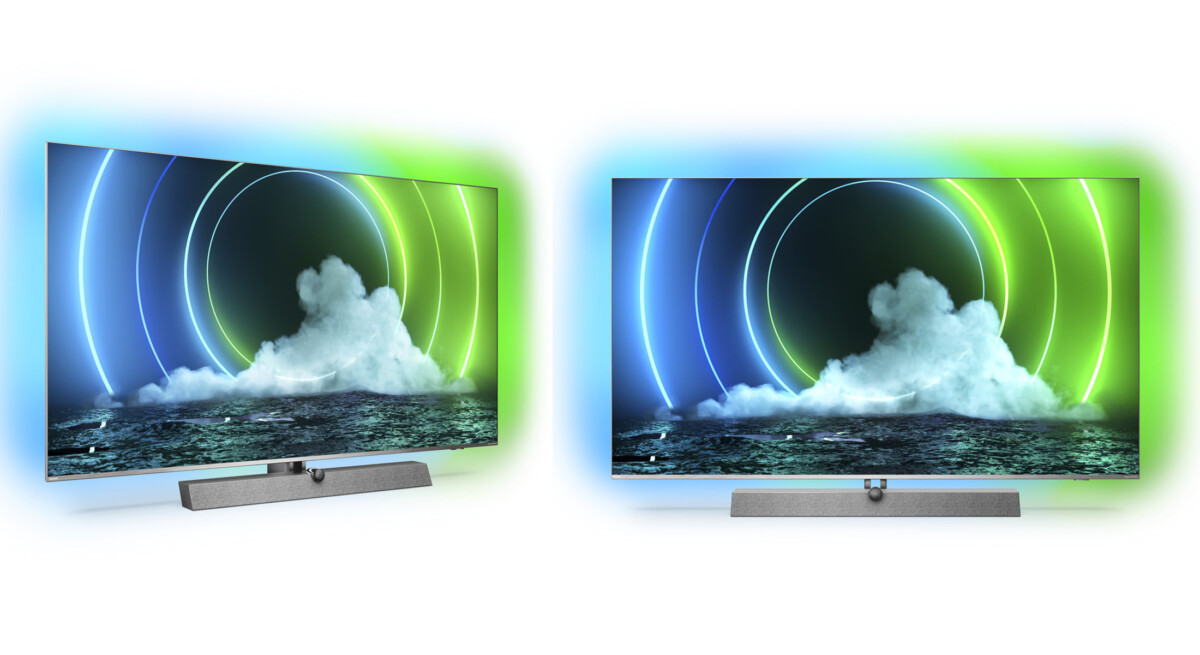 Good news, however, in terms of the quality of the panels which, thanks to HDMI 2.1 connectivity at 48 Gbps, can take advantage of 4K at 120 Hz. Gamers will appreciate, as will the associated support for technologies such as VRR and the ALLM reducing the risk of artefacts in video games. And besides, on the Variable Refresh Rate side, Philips also emphasizes compatibility with AMD’s FreeSync Premium Pro, implying: which goes well with your Next Gen console.

Finally, all these mini LED models, as well as the OLED models for that matter, will benefit from the four-sided Ambilight technology, already present on the 2020 models, except that it would have been further improved here. Who will test will see.

This year again Philips visibly plans to put the package on OLED. Will he use the brightest new panels ever produced by LG display and that we will find at LG, Sony and, obviously, Panasonic? We do not yet know. No notion of brightness is mentioned by the firm. You know our tenacity, that is another of the subjects on which we asked to speak with Philips. It shouldn’t take too long, but as these models aren’t expected to arrive until Q2… we still have some time. 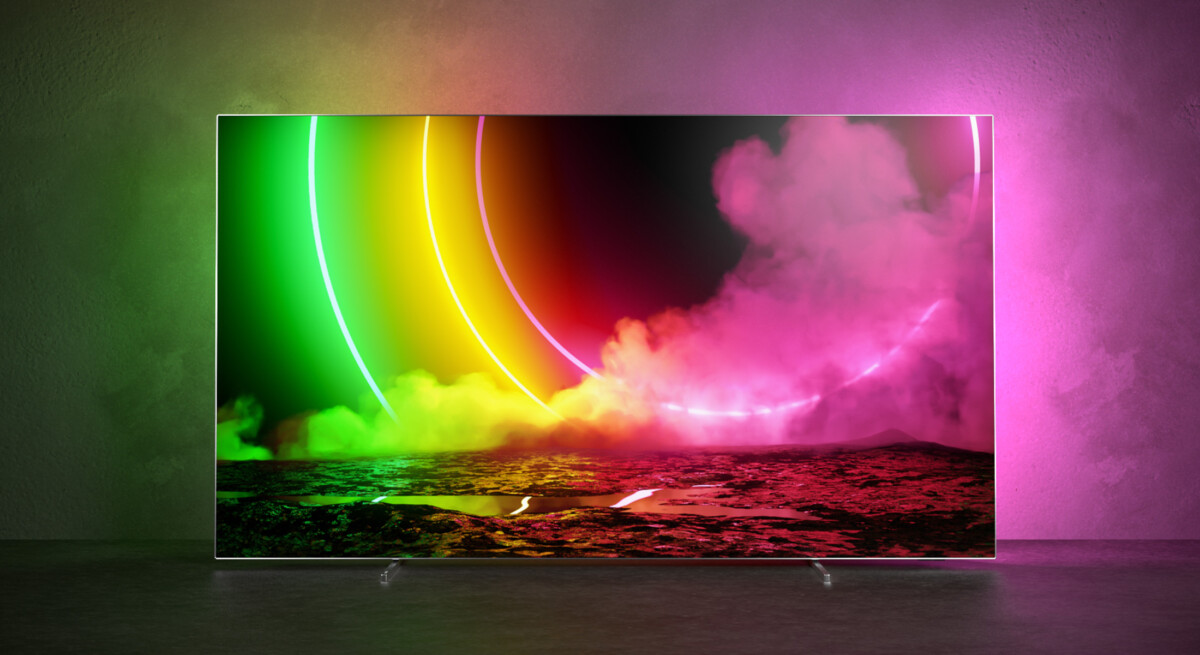 What is all the more frustrating for us is that Philips announces an OLED 806 range made up of 48, 55, 65 and 77 inch models and an OLED 806 range available in 55 and 65 inches. It should therefore have something for all tastes and almost all budgets, but there is still a dearth of information. Players, for example, could be tempted by the 48 and 55 inches since all the models announced integrate HDMI 2.1 and the advantages mentioned above for the Mini LED models.

There should also be technical and performance differences between the 806 and 856, but Philips does not mention them. We know until the 856 are based on a central metal foot (no photo provided) while the 806 are equipped with metal foot, more conventional as can be seen in the photo above.

Like the Mini LED models, these OLED TVs take advantage of DTS Play-Fi wireless connectivity to create a wireless multiroom system with great ease, according to Philips. And since these TVs run Android 10, Google Assistant is in the game, but not hands-free. You must press the button on the remote control to activate the voice assistant. And it should be the same for using the other assistant available, namely Alexa from Amazon.

The success of the The One range naturally prompted the manufacturer to renew these entry-level models. Here again, we can regret the little information shared by Philips. The main thing to remember then is that these LCD models with Direct LED backlighting (without further details), are also equipped with an HDMI 2.1 interface with the support of eARC, VRR and ALLM. What to seduce players who have already blown up the annual budget in the purchase of the console. 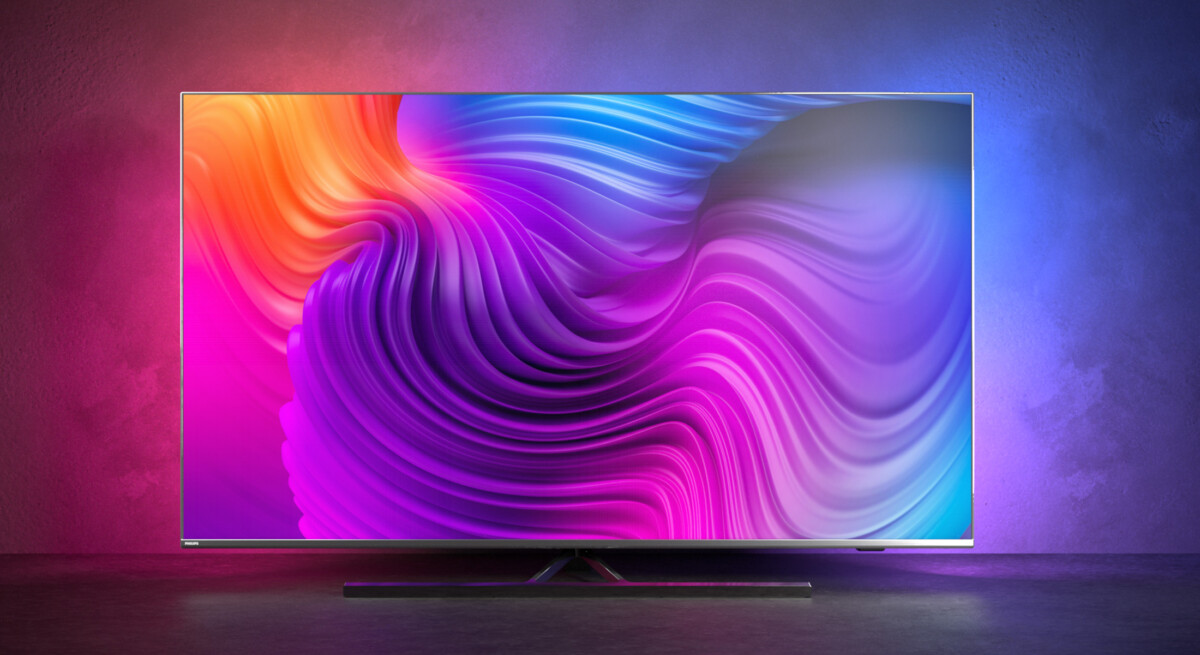 Judging from the photo above, these TVs look pretty aesthetically appealing. The 43, 50 and 58 inch models will rest on the pivoting center leg – a great point! – that can be seen in the photo above. The 70 and 75 inch models will be equipped with two trapezoidal metal legs. Ambilight technology goes downmarket, with a three-sided system and, arguably, made up of fewer LEDs for each side. Finally Philips specifies that the integrated audio system delivers a power of 20 watts, but no subwoofer is present here to bring a little roundness and pep to the rendering.

A P5 processor to rule them all

Philips also announces its new image processing processor, the 5th generation P5. This P5 chip is one of the benchmarks in terms of image processing, including in its current 4th generation that equips televisions of 2020. You would have guessed – if you followed the other announcements made by Samsung, LG, Sony or again Panasonic – this new version adds a touch of artificial intelligence and « machine learning ». Neural networks, capable of analyzing more precisely the image and the different elements that compose it.

Big terms very in vogue to tell us that this chip is even more efficient. She has even been trained to work on the quality of upscalling and the reproduction of degraded or lower definition images to produce Ultra HD rendering of the best possible quality. The OLED 806 range (and probably 856, even if it is not indicated) will benefit from a specific treatment: the Fast Motion Clarity. We will judge on the spot, but it would be a question here of a new engine of compensation of movements which would ensure to produce a rendering as realistic as possible. This would also be the source of the performance of the processor and therefore of the panel in game mode.

Let us cross our fingers so as not to sink, on the contrary, into a very artificial rendering of our programs. Moreover, it would seem that Philips is vigilant on this subject since we will find on 2021 televisions, three image modes dedicated to your films and series: Home Cinema, Pure Cinema and the famous Film Maker Mode. Finally, this fifth generation P5 processor is also the key element in the management of HDR signal metadata which will benefit, for certain models, from the dynamic management of settings thanks to a light sensor integrated into the panel.

We will be sure to come back to the details of this new Philips 2021 range, as soon as we can speak with a spokesperson. In any case the manufacturer does not seem to decide to be left behind by the leaders of the sector and we appreciate …