You didn’t know her? We present it to you. The Aya Neo is a new portable console under Windows 10. Compared to other consoles launched in the same niche in recent months, this newcomer has the advantage of integrating an AMD Ryzen processor. A first. 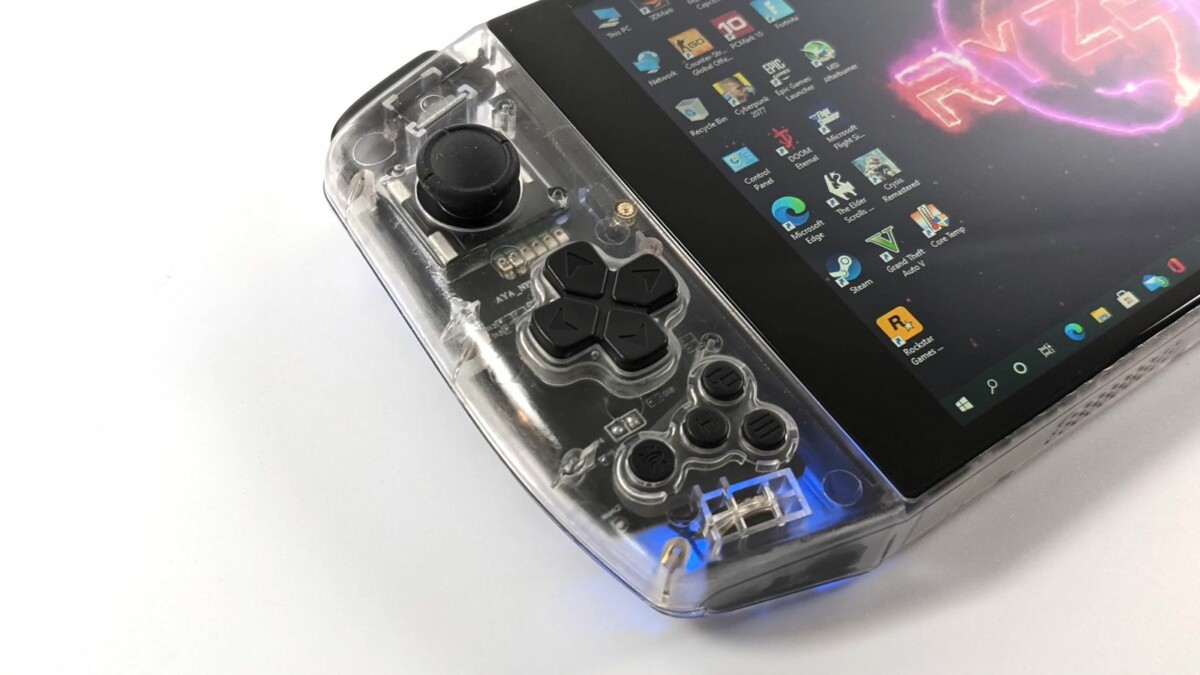 The Aya Neo is a real shoehorn PC in a portable console format // Gamesdone: ETA Prime

We told you about GPD Win 3 a few months ago, now here is the Aya Neo. This portable game console, based on Windows 10, takes more or less the same concept with a Nintendo Switch format, but this time with an AMD Ryzen “Renoir” processor (instead of an Intel Core i7 or i5 “Tiger Lake-U ”on the Win 3) and a slightly larger screen (1280 by 1200 against 1280 by 720 for its rival). On the other hand, it does not include a keyboard to be mainly focused on gaming, unlike the GPD Win 3 which can (occasionally) be used as a real PC.

Expected on a firm footing after the success of its crowdfunding, the Neo begins anyway to arrive at the users who ordered it. The opportunity to have a good overview of his in-game performance.

The first portable console powered by an AMD Ryzen processor, the Aya Neo relies on a Ryzen 5 4500U chip. Those who are most attentive will have noted that this is a low-power SoC of the previous generation. And for good reason, the Aya Neo was announced before the (very recent) introduction of the new AMD Ryzen “Cezanne” processors. Despite everything, its chip benefits from 6 cores and 6 threads (no SMT on the 4500U) under Zen2 architecture and from a Radeon Vega 6 graphics part comprising 6 computing units for 384 stream processors.

Alongside this processor, the small console has 16 GB of RAM (LPDDR4X) and 512 GB or 1 TB of storage (NVMe SSD) depending on the model chosen. As mentioned above, the Neo has for the rest an HD + screen (1280 by 800 pixels) and a 47 Wh battery giving it a theoretical autonomy of 6 hours. VideoCardz indicates, however, that it is actually necessary to count on two hours in play.

At 15 W (the default TDP of its chip), the Aya Neo is able to launch many PC games in fairly good conditions. GTA V, Forza Horizon 4, Skyrim Special Edition or Marvel vs Capcom Infinite can for example be propelled to at least 60 FPS with an average level of detail (in 800p). Fortnite and Counter Strike Go also behave very well on the device, with more than 70 FPS on the first (in medium, and with the resolution scale at 100%) and more than 100 FPS on the second (high / medium level of detail). It is also possible to play Doom Eternal (around 60 FPS) and Crysis Remastered (around 40 FPS), but on condition that you opt for low settings. Same thing for Cyberpunk 2077 which remains limited to just 30 FPS.

Interestingly, the Ryzen 5 4500U of the Aya Neo can be limited to a TDP of only 5 W in order to extend the autonomy. An option that makes sense in particular for playing old games through emulators.

For now, the console is delivered to the first buyers (the backers who had participated in the crowdfunding campaign) in its Founder edition, with a translucent shell and in a form that could be brought to evolve slightly by a launch on a larger scale.