Razer relies on the novelties of Nvidia, but also a new generation of screens to upgrade its Blade 15 and Blade Pro 17. 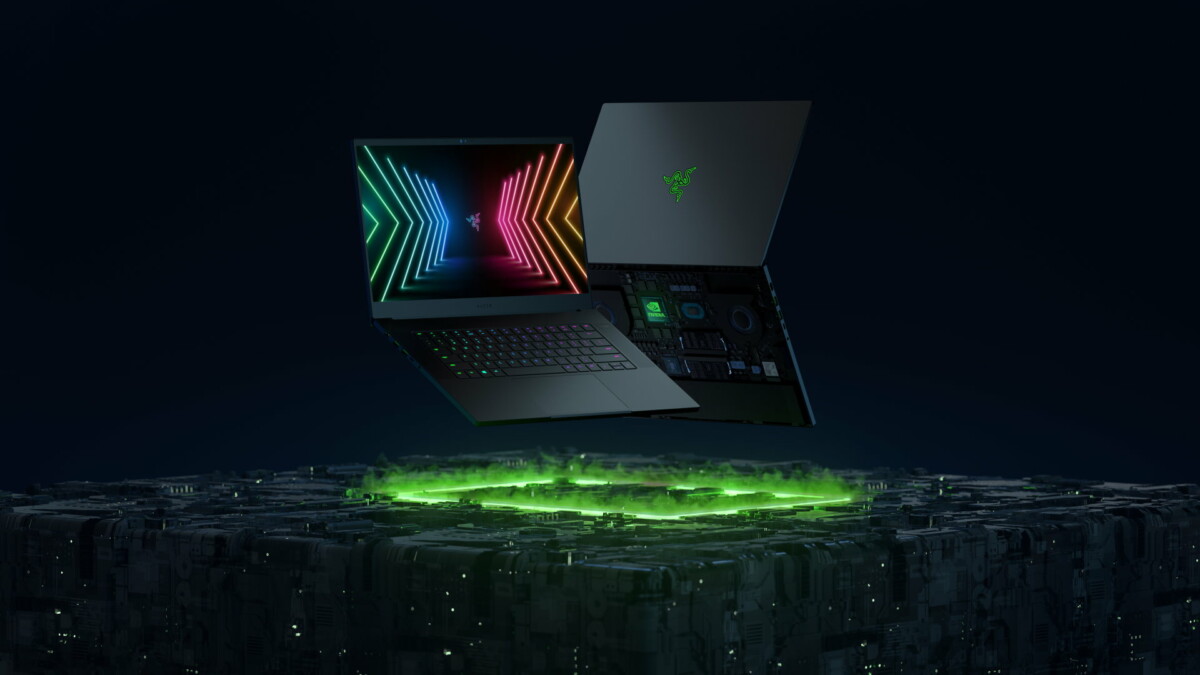 CES 2021 is the venue chosen by Nvidia and AMD to unveil their new graphics chips and new processors for laptops, respectively. Razer made the choice for its new Blade 15 and Blade Pro 17 to continue working with Intel for the processor, but switched to the new generation of GeForce from Nvidia.

Razer is not reinventing its Blade 15 and retains the overall design. The novelties of this model are mainly made on the choice of components, although we can still note the addition of a slot for an additional NVME SSD among the new features brought to the design. The PCs announced by Razer integrate, depending on the configuration, the 10th generation Intel Core i7 processors with 6 or 8 cores. The 11th generation is not yet available at this level of performance. If we put aside the more accessible model equipped with a GTX 1660 Ti, the other configurations are equipped with an RTX 3060, 3070 and 3080 graphics card. 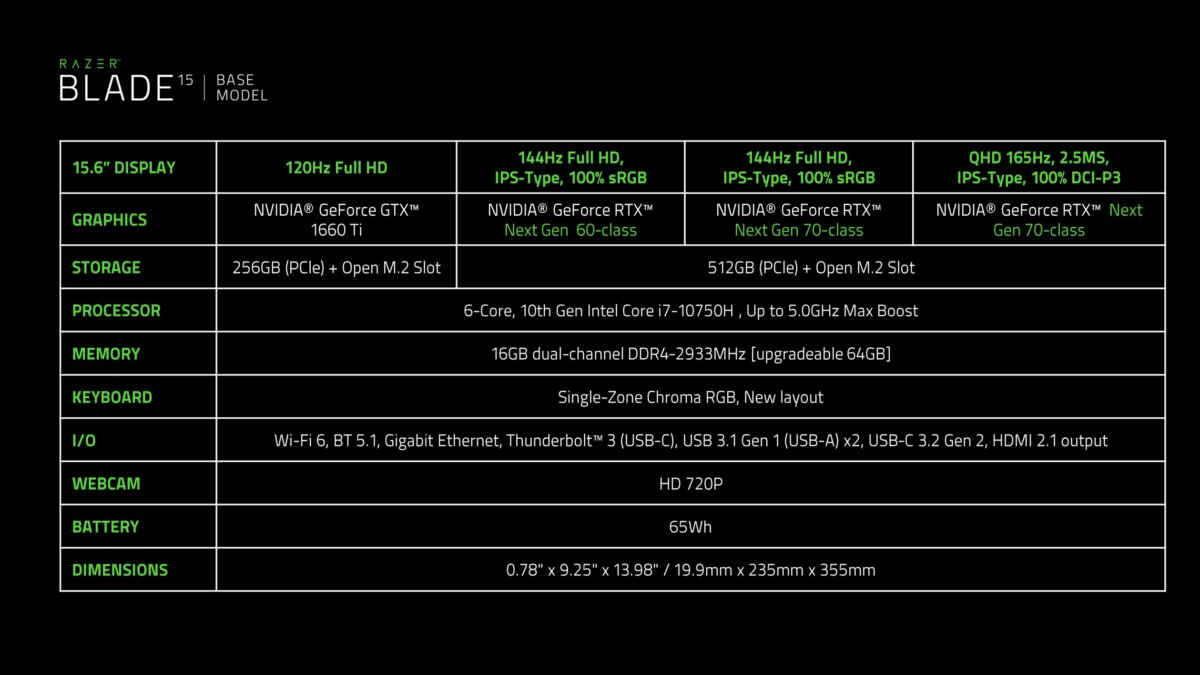 Two models are offered: the Razer Blade 15 and the Advanced Blade 15. The latter goes upmarket on all its components and notably adds a Windows Hello compatible camera, an 80 Wh battery instead of 65, an SD card reader and compatibility with the new Wi-Fi 6E. 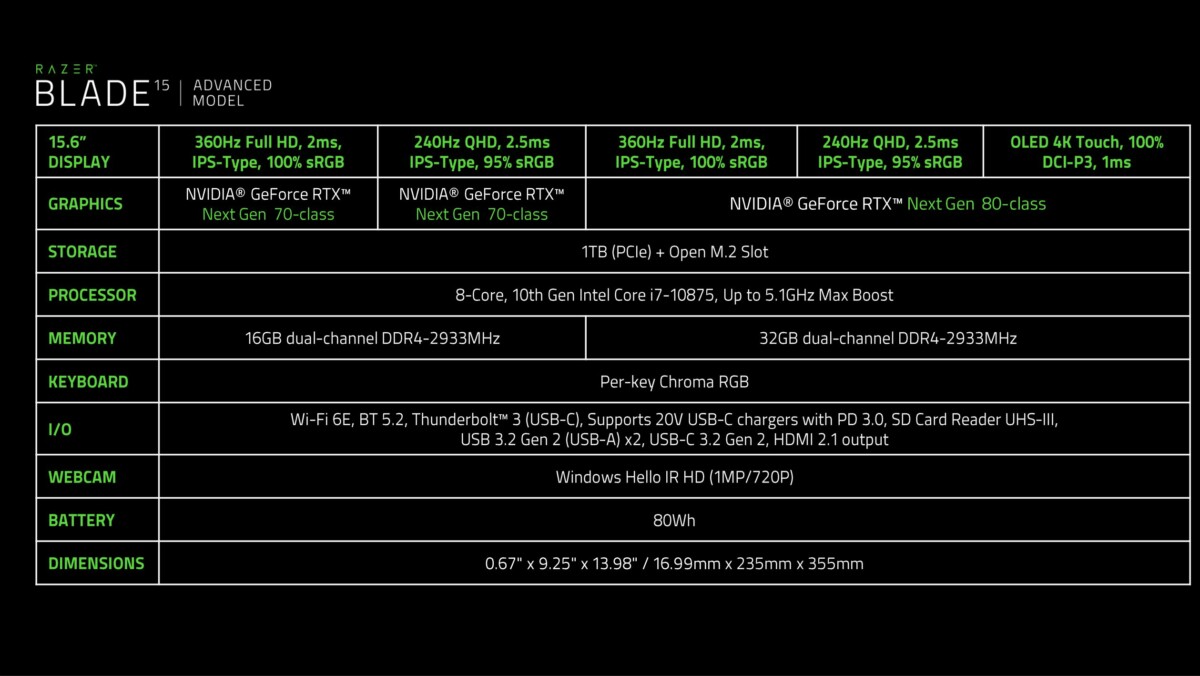 But the most interesting with this new generation of Razer PC is in the selection of screens offered. The most upscale offers a 4K OLED panel covering 100% of the DCI-P3 spectrum and manufactured by Samsung. The other configurations are based on IPS panels with 95 or 100% sRGB coverage and display frequencies up to 360 Hz. We can especially note the arrival of a QHD definition, intermediate between Full HD and 4K UHD very resource intensive, and already well known to PC gamers.

Small strangeness, however, while the base model offers a 100% DCI-P3 QHD 165 Hz display, the advanced model relies on a 95% sRGB GSync 240 Hz display, still in QHD. Those who choose the high-end model will therefore have to sacrifice the excellent colorimetry for a better display frequency. 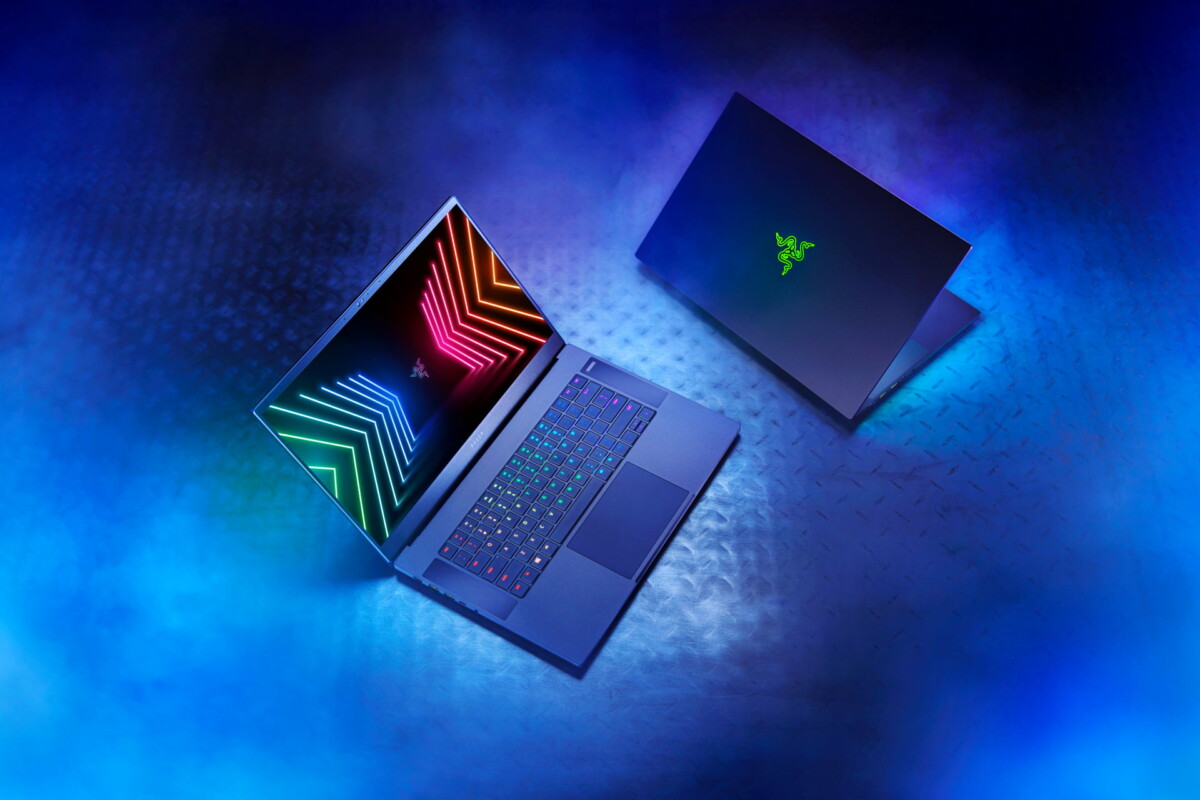 The 17-inch formats make it possible to have very powerful computers, without compromising on the cooling of their chip, and with all the display comfort necessary for working or playing. The new generation of Razer Blade Pro 17 uses the same design, but improves most of the components.

The choice of screen is easier, this time we will have Full HD at 360 Hz, QHD at 165 Hz or 4K UHD at 120 Hz, depending on the configuration. The connectivity offered is particularly complete with three USB-A 3.2 ports, a Thunderbolt 3 USB-C port, a USB 3.2 USB-C port, an HDMI port, an SD card reader, an RJ45 Ethernet port (2.5 Gb / s) and a dedicated power supply port. USB-C charging is still possible with a 20 V charger.

The new Razer Blade 15 will be available from January 26 in Europe, for a price starting at 1899 euros. The advanced model will arrive a little later, starting in February.

The Razer Blade Pro 17 will be marketed from 2600 euros and pre-orders will begin this January.