Qualcomm has just unveiled the Snapdragon 888, its new SoC that will equip high-end smartphones in 2021. An important shift that wants to position the smartphone as a power monster capable of equaling cameras or game consoles. 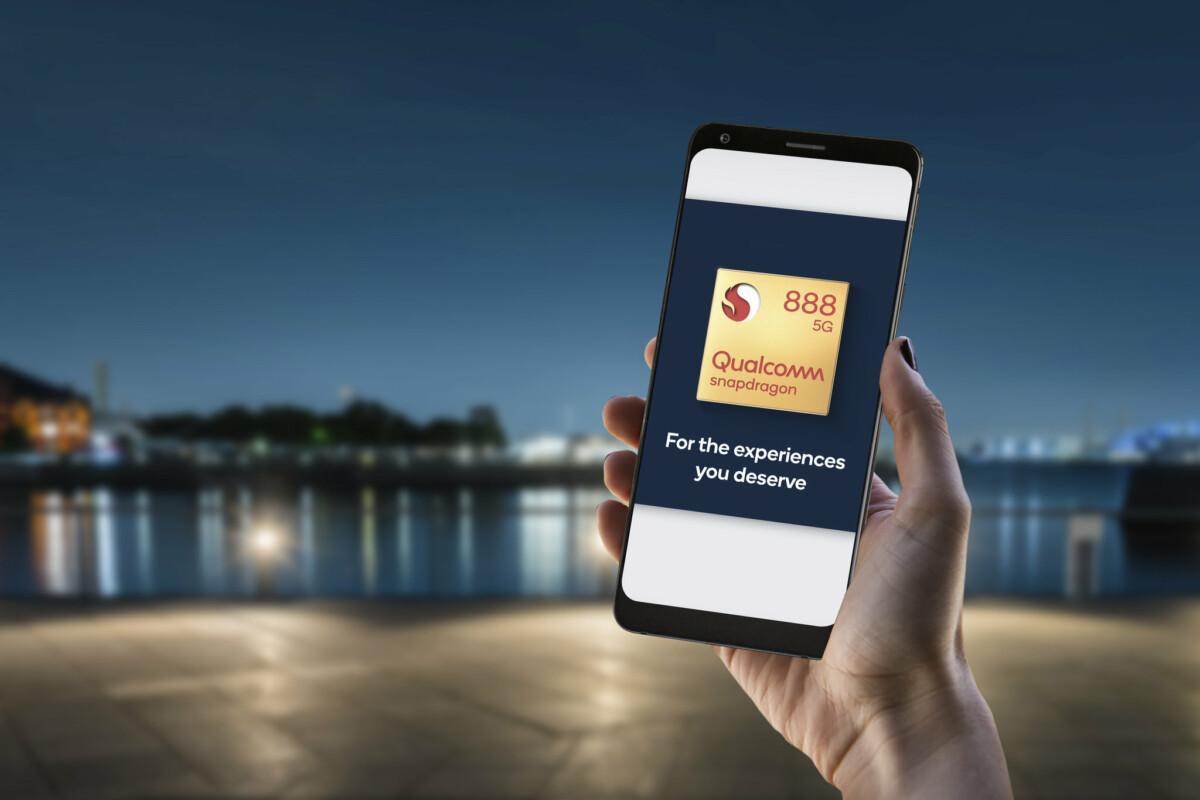 In France, when we think of 888, it often brings us back to the voicemail of Orange numbers, or to questionable casinos. However, in Asia, and more particularly in China, the 8 is a lucky number and it is often very well regarded, even in other cultures. This is partly why Qualcomm decided to name the Snapdragon 888 as such rather than just using its usual iteration by 10 and switching to the Snapdragon 875. An opportunity to mark a big technological leap forward.

The Snapdragon 888 in detail

The Snapdragon 888 therefore succeeds the Snapdragon 865 and will equip the high-end smartphones of 2021 – at least for the first half of the year. Qualcomm thus hopes to allow manufacturers to stand out and take a real leap forward by focusing on 5 specific areas: connectivity, artificial intelligence, the camera, gaming and of course pure performance.

For this, the architecture of the chip remains the same overall, but each component is improved. At the level of the CPU for example (Kryo 680), we go to a fineness of engraving of 5 nm, thus equaling the Kirin 9000 from Huawei and the A14 from Apple. There are 8 cores on board: 1 Cortex-X1 core clocked at 2.84 GHz with 1 MB of dedicated L2 cache in order to deploy strong power peaks, 3 Cortex-A78 cores (with 512 KB of L2 cache) clocked at 2.4 GHz for greedy calculations and 4 Cortex-A55 cores clocked at 1.8 GHz (128 KB L2 cache) for low-consumption tasks, but necessary for everyday life. It is thus announced as 25% more efficient than the Snapdragon 865. 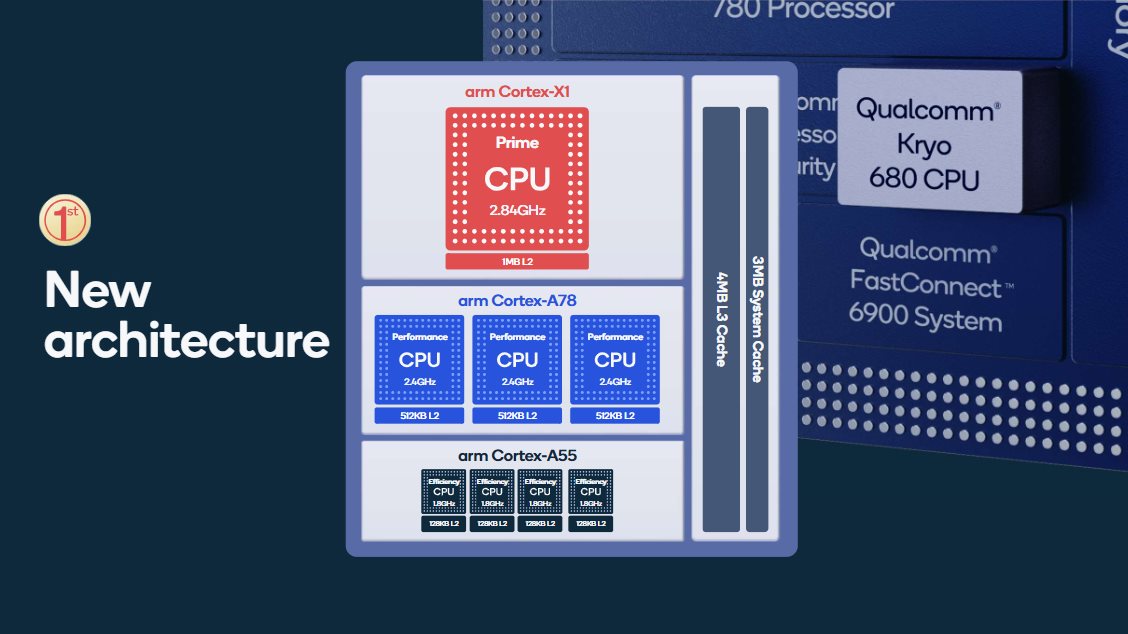 Alongside it, we also find an Adreno 660 GPU allowing 35% faster image rendering, a triple ISP Spectra 580 capable of handling up to 2.7 Gigapixels per second, a merged Hexagon 780 DSP allowing accelerators to share a 16 times larger common memory, but also a section dedicated to sensors, connectivity, security and a Snapdragon X60 modem.

But beyond the simple technical specifics, how does this really translate?

A triple ISP to manage 3 sensors at the same time

Going from a double to a triple ISP for the first time, the Snapdragon 888 can handle three streams simultaneously to handle photo and video from three different sensors.

Concretely, whether in photo or video, the Snapdragon 888 can process in parallel the information coming from a wide-angle, a telephoto and an ultra-wide-angle, with a definition of 28 Mpx for the photos and up to 4K HDR for video. One of the main advantages of this is to allow smoother zooms by switching from one sensor to another in a way invisible to the user. 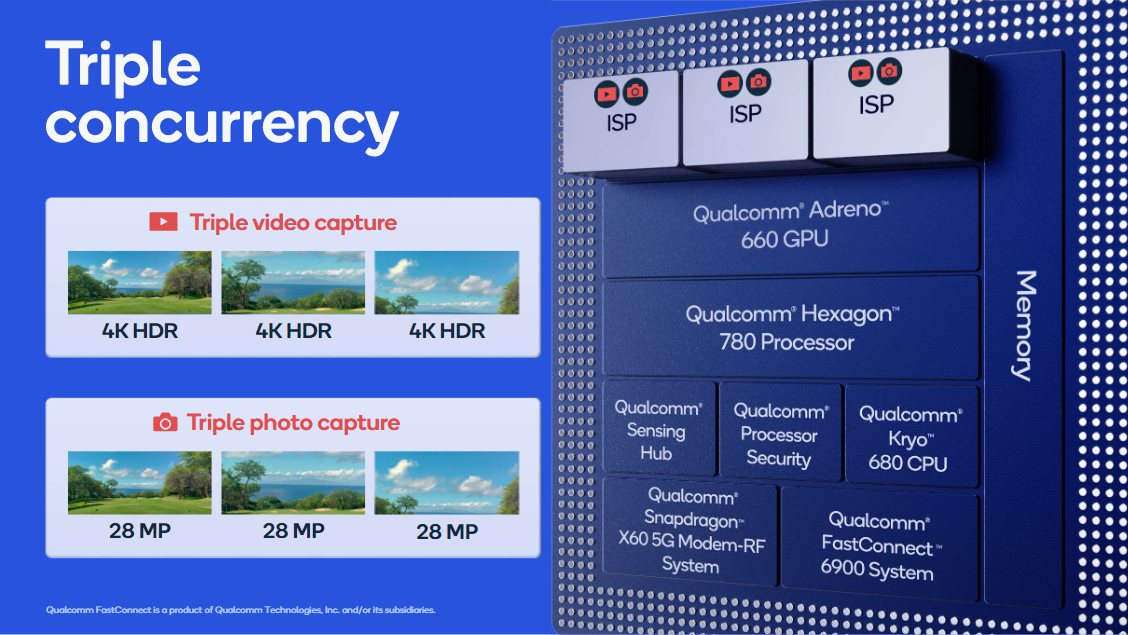 Besides that, this triple ISP processes images 35% faster, offering a burst mode that can go up to 120 images of 12 Megapixels per second. Enough to manage exposure, autofocus and white balance better than ever, promise better rendering in low light, but also ensure live computational HDR on 4K videos.

Artificial intelligence at the heart of the SoC

Nowadays, artificial intelligence is at the heart of many elements of our smartphones, both for photos and for many everyday effects, such as the application of a simple filter on Snapchat, the detection of audio events ( an “OK Google” for example) or activity recognition from sensors such as the accelerometer to determine the position and inclination of the phone. The Snapdragon 888 merges for the first time the Scalar, Tensor and Vector accelerators, the latter sharing 16 times more dedicated memory allowing much faster exchanges between these three units and reduced waiting times. 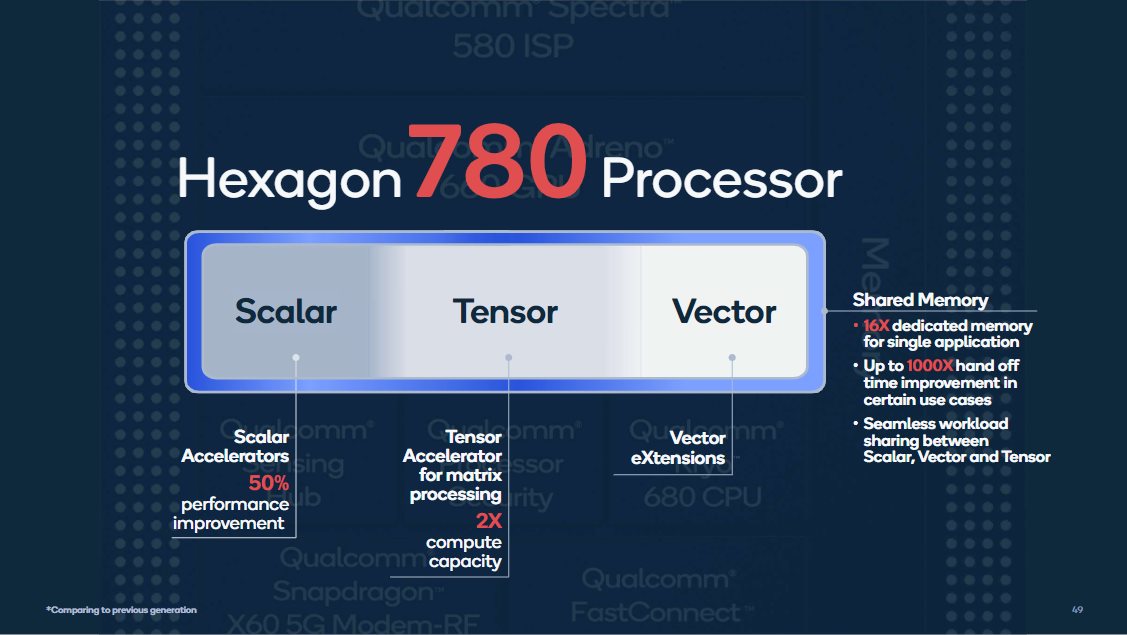 More concretely, this promises performance three times higher per watt. Qualcomm promises up to 26 trillion operations per second, against only 15 trillion on the Snapdragon 865. The possibilities are almost doubled.

For developers, this power is made accessible directly by Qualcomm’s Neural Processing SDK, but also by broader tools like TensorFlow Lite and the Android Neural Networks API.

The game is getting closer to consoles

The power deployed jointly by the CPU and GPU of the Snapdragon 888 also ensures a better gaming experience, knowing that in 2020, mobile gaming has jumped 25% among users. The Adreno 660 thus supports games up to 144 FPS with a 30% improvement in performance compared to the previous generation. 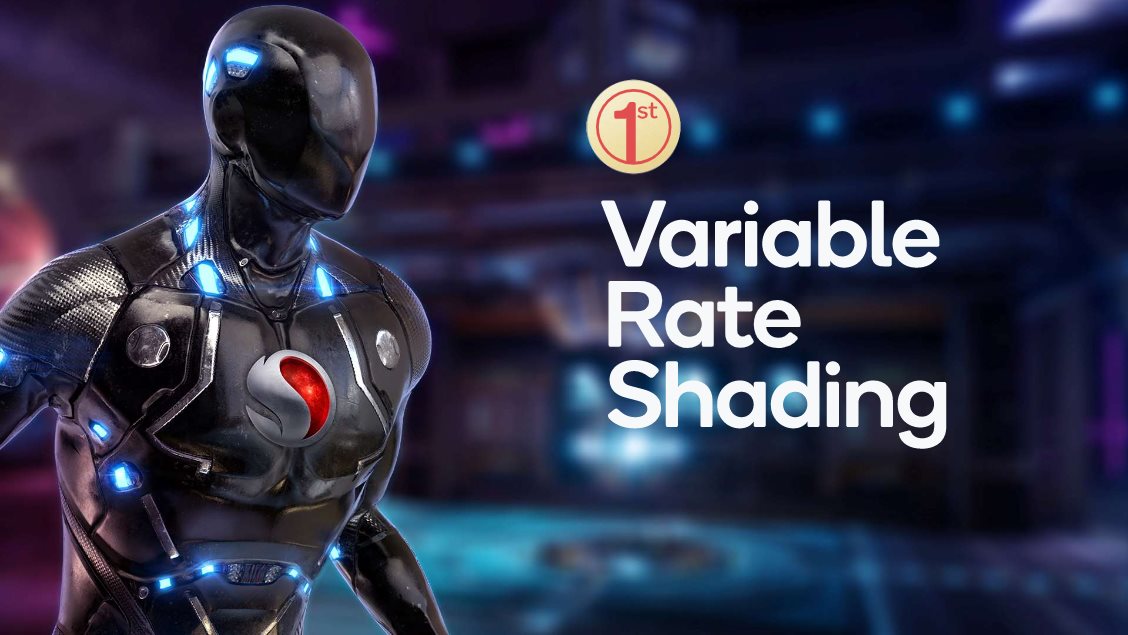 This is made possible, among other things, by the integration of Variable Rate Shading (VRS), a first for smartphones. This is a technology that allows the information displayed on the screen to be treated differently depending on its position. The most common example is in the car racing game: you don’t care as much about setting the roadside scenery as you do about your car or the road in front of you. It is therefore unnecessary to use computing power to detail each blade of grass. Thanks to this, developers will be able to optimize their games and thus greatly improve performance. 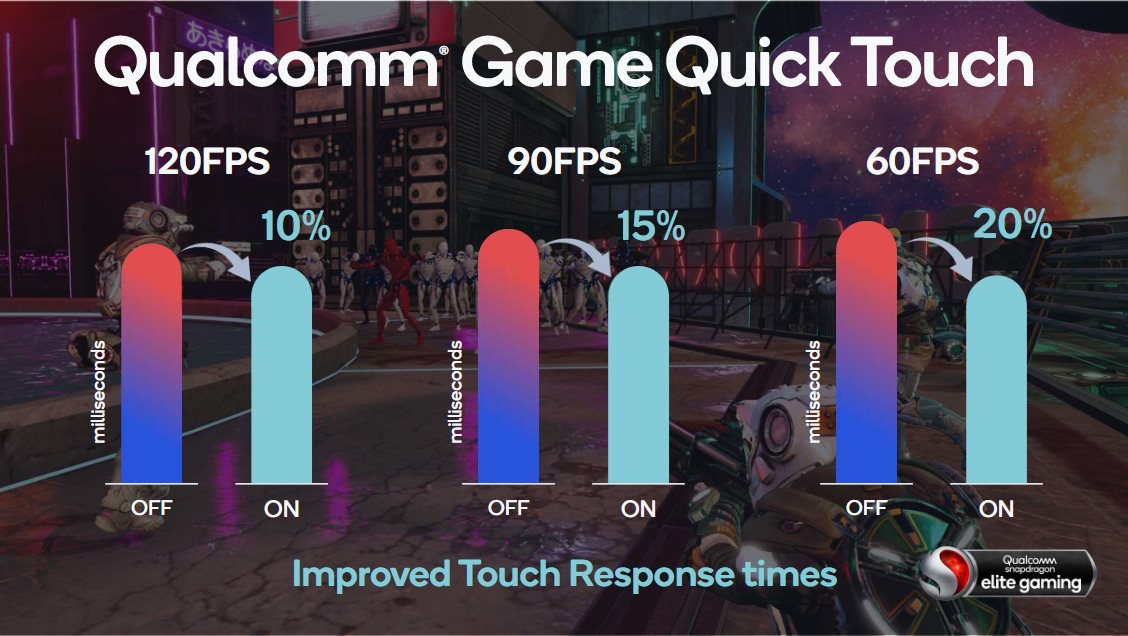 Besides the image quality, Qualcomm also wants to improve the experience thanks to the Game Quick Touch, reducing the response time during the action. This gain can range from 10% for a 120 FPS game up to 20% for a 60 FPS game.

A unit dedicated to safety

Part of the Snapdragon 888 is also dedicated to the security of user data. This new architecture allows the creation of sandboxes ensuring the partitioning of data.

This can be particularly useful for isolating different operating systems on the same device, creating a secure enclave for each application. This quick switch also allows you to create different profiles, opening OS and session depending on the person recognized by a biometric sensor (fingerprint or facial recognition) at the time of unlocking.

5G and Wi-Fi 6E on the program

For those who do not want to be limited to the power of their smartphone and turn to solutions in the cloud (Xbox, Stadia, Luna …), the Snapdragon X60 modem of the Snapdragon 888 is obviously compatible with the latest connectivity standards and this time is integrated into the SoC itself, which was not the case on the Snapdragon 865.

This modem coupled to the FastConnect 6900 system therefore makes it possible to connect to a Wi-Fi 5, Wi-Fi 6 or Wi-Fi 6E network with a theoretical maximum speed of 3.6 Gbps in stream 8 × 8 MU-MIMO. 5G is also present on the non-standalone and standalone bands, in sub-6 GHz and in millimeter (mmWave). Enough to achieve download speeds of up to 7.5 Gbps for download and 3 Gbps for upload. 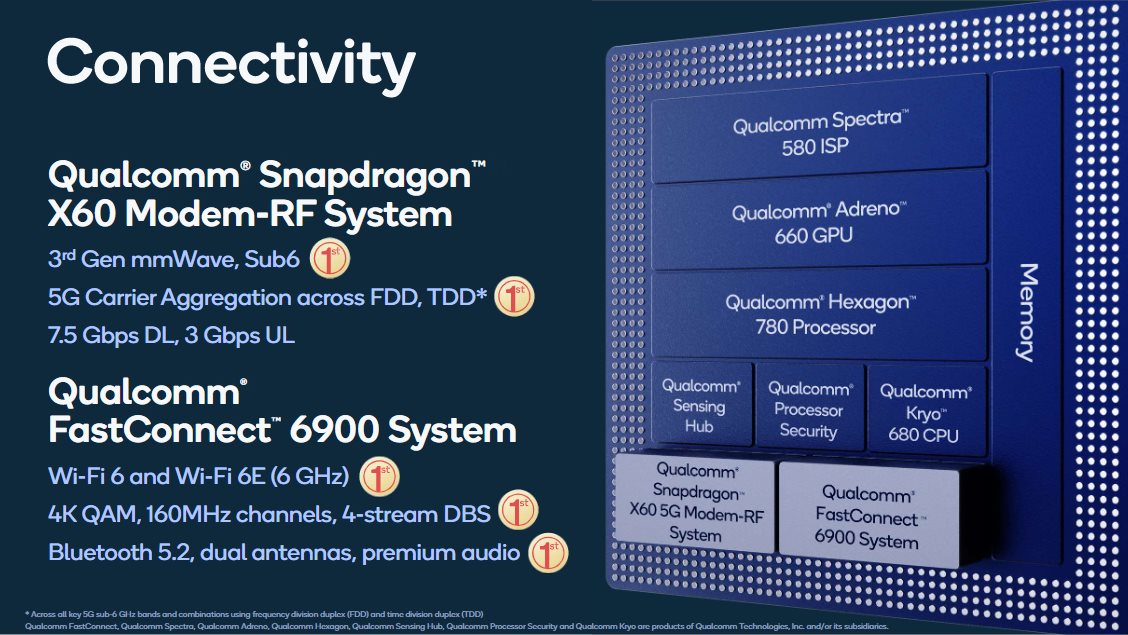 Connectivity on the Snapdragon 888 // Gamesdone: Qualcomm

Finally, the audio part is also evolving with Bluetooth 5.2 compatibility (against 5.1 on the Snapdragon 865) and the usual aptX codecs.

The first devices equipped with the Snapdragon 888 will be available from the first quarter of 2021. Among the potential candidates, we know that the Xiaomi Mi 11 is well placed, as is the OnePlus 9 Pro. Sony and Samsung could also call on Qualcomm for their next flagships. See you soon to learn more about these upcoming smartphones.