With more than 220 kilometers of autonomy under the WLTP cycle, a power of 184 horsepower and 270 Nm, and a temperament announced in the line of other Mini, this 100% electric version is full of promises … for those who will have it. use. 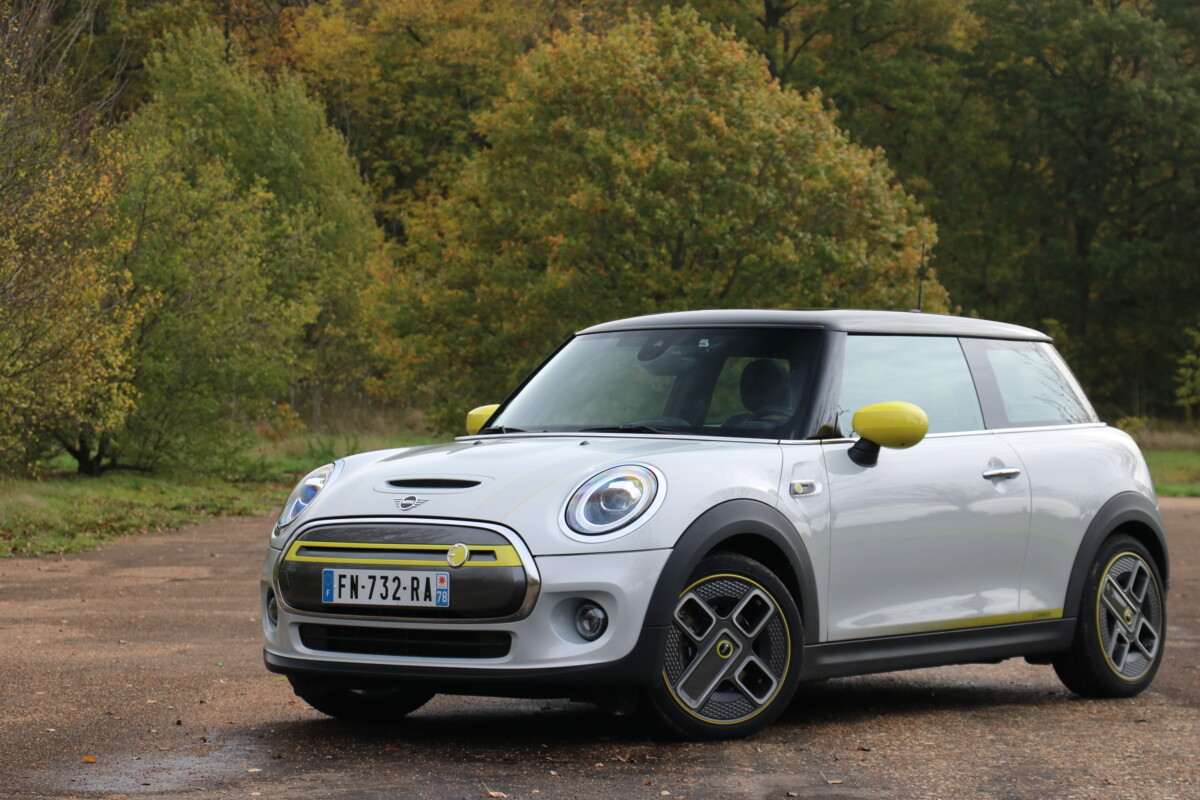 At a time when car manufacturers are clearly orienting their range towards the electric fairy, one could be surprised to see Mini a little behind in this area, especially when opposite, BMW with its i3, meets a certain success. Mini preferred to focus on the rechargeable hybrid first, with its Countryman, before launching the star of its range in a 100% electric version.

The Mini Cooper SE (that’s its trade name) therefore arrives in 2020 with the ambition of seducing city dwellers looking for a chic car, with a contained and electric size. And in general, in view of the displayed autonomy, the Mini Cooper SE cannot necessarily be aimed at an audience other than city dwellers.

Customers looking for an electric car, for the most part, are looking for a vehicle that does not necessarily differ from a thermal. This is almost the case for this Mini Cooper SE which retains the same boils as its thermal cousin, with a few details, such as the now full grille, the gas hatch replaced by a larger opening for the grip or even these solid rims , optional on our “Greenwish” finish, with a particular design which allows to gain in aerodynamics.

Inside, the neo-retro atmosphere always has its effect, especially when the set of materials is qualitative and the assemblies very well done. The central 8.8-inch screen is tactile and has good ergonomics. It can also be controlled via the dial located on the center console. We also find a second 5.5-inch screen as digital instrumentation in front of the driver.

The graphics are very neat and the organization of the menus relatively ergonomic. It’s rare enough to underline it. The car has two USB ports on the front and is compatible with wireless Apple CarPlay, but not with Android Auto at the moment.

In terms of livability, the Mini Cooper SE is obviously not a people carrier with its 3.85 meters long, especially since it is only available in the three-door version. Compared to a Mini three-door thermal, the electric model slightly raises its rear seat making it even less welcoming and accessible.

Let’s say that it is more of a booster seat for short trips, especially since this Mini Cooper SE is not intended to take you really far, at least given the current state of the vehicle. charging network in France. The trunk offers a capacity of 211 liters with a double floor for storing charging cables.

The Mini Cooper SE in a few figures

Mini being part of the BMW group, there are indeed some synergies between the BMW i3 and this Cooper SE. It has, on the one hand, the same engine as the 184 horsepower i3 as well as the same battery pack (32.6 kWh, including 28.9 useful) but with cells reorganized in T to be placed under the bench and the central tunnel, without encroaching too much on the interior space. The Mini is also equipped with the same optional heat pump to heat the passenger compartment in the middle of winter and consume less energy than the resistances.

The Mini Cooper SE weighs approximately 150 kilos more than a 192 horsepower Cooper S, or about 1,400 kilos for a car less than four meters long. It’s a lot and you can feel it behind the wheel. Another change for this electric Mini, it receives specific train settings, especially at the level of the suspensions. The car gains 1.8 centimeters in height, to house, among other things, the batteries without affecting the ground clearance.

As stated above, you may not necessarily be able to make long trips aboard this Mini. Or at least not in good conditions. Under the WLTP cycle, we should be able to browse between 225 and 234 kilometers in one go. The car supports fast charging up to 50 kW via a CCS Combo socket. This allows to recover 80% of autonomy in 36 minutes. On an 11 kW Wallbox, this takes around 2h30 and up to 13 hours on a classic domestic socket.

Does it keep its fun side to drive?

A Mini Cooper, if you’ve ever had the chance to drive one, it’s a pretty fun car behind the wheel. But with its extra pounds, is this still the case for this Electric Mini? The answer is yes, even if being overweight takes its toll. The engine of 184 horses and 270 Nm de couple provides good dynamic performance with a 0 to 100 km / h shot in 7.3 seconds and a maximum speed capped at 150 km / h.

The car has five driving modes which influence the consistency of the steering or the response to the accelerator. The “Green +” and “Green” modes somehow restrict performance while the “Sport” mode reveals the dynamic character of our Mini. Devoid of piloted suspensions, the small Mini is quite firm, especially on small compressions where it is quite dry.

In town, the Mini Cooper SE is a perfect little city car that sneaks up everywhere, except for one detail. And this detail can quickly become annoying, at least from our point of view. Regenerative braking is much too powerful, at 0.19 G, against 0.16 G for a BMW i3 for example.

It allows you to evolve in the city without ever touching the brake pedal, even to a stop, except that this braking is quite complicated to adjust and, when the accelerator is released too suddenly, the body is sent forward. Fortunately, another mode makes it possible to reduce the deceleration from 0.19 to 0.11 G, which is much more acceptable, except that this mode does not remain in memory and it must be selected at each start. 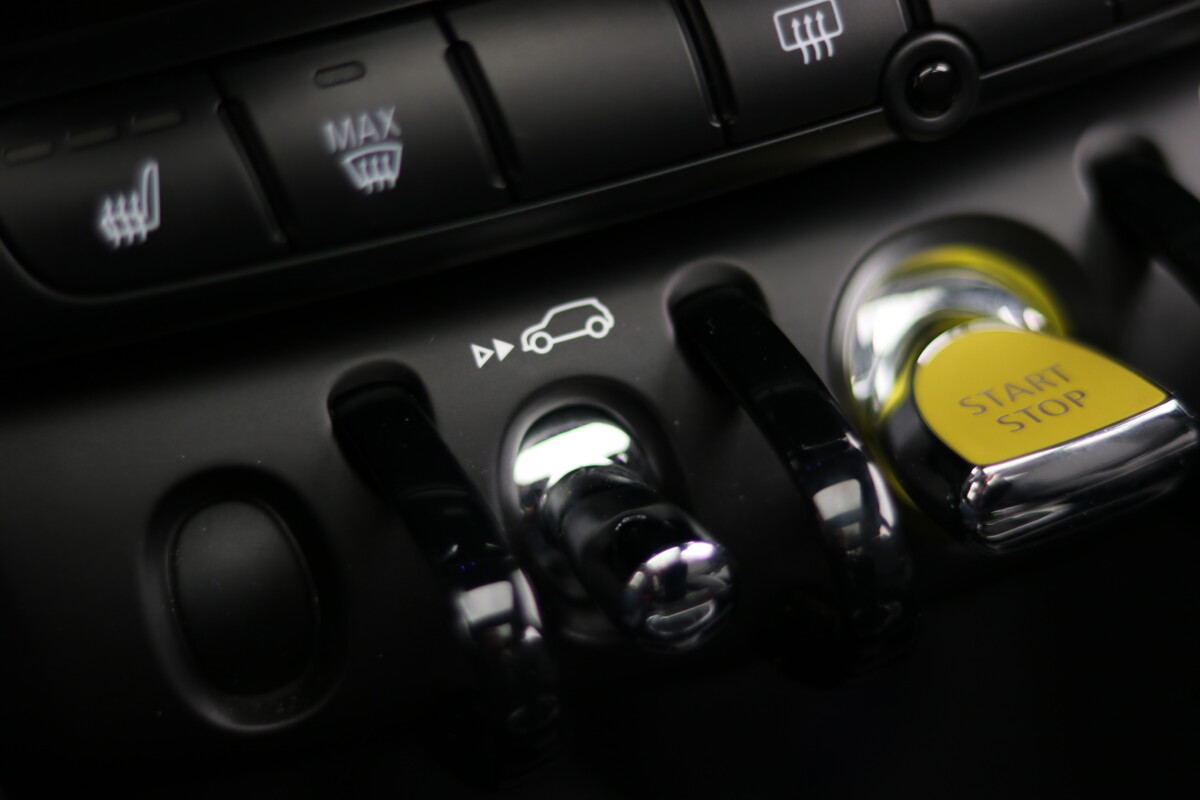 This command is used to manage the level of intensity of regenerative braking // Gamesdone: Yann Lethuillier for Frandroid

In terms of consumption, it is rather acceptable, especially as our test conditions were not necessarily optimal since the outside temperature of 12 ° forced us to turn on the heating. On a course of a hundred kilometers oscillating between 30% city and 70% national roads, we have noted 16.8 kWh / 100 kilometers, which would have provided less than 200 kilometers on a single charge.

This therefore confines our little Mini Cooper SE to purely daily use oscillating between urban and peri-urban. For long trips, because of its excessively average range and the too sparse recharging network in the area, it will be necessary to switch to another vehicle. 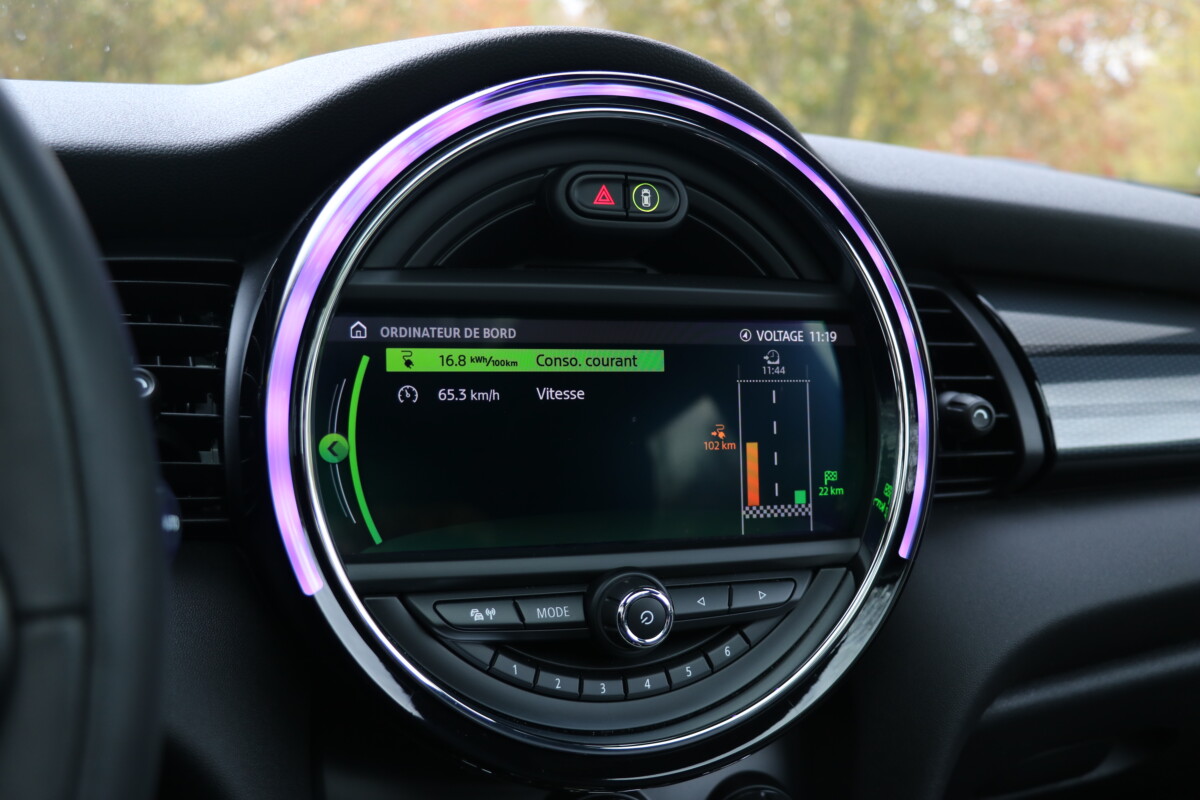 The painful has perhaps never been so aptly named. Basically, the Mini Cooper are expensive vehicles due to their premium positioning. Professionals will have more luck than individuals with a “Business” finish that starts from 32,900 euros, before ecological bonus of 5,000 euros.

The “Greenwich” and “Yours” versions, reserved for individuals, are more expensive and start respectively from 37 600 and 40 800 euros, before bonus of 7,000 euros. The final bill therefore fluctuates between 30,000 and 35,000 euros, a substantial sum for an electric city car with more than average autonomy. The prices are however correlated with those of its thermal cousin, the Mini Cooper S in manual gearbox.

To justify these substantial prices, Mini equips its electric version with numerous standard equipment. The list of options is therefore quite limited (head-up display at 620 euros, parking sensors at the front at 440 euros …), once is not customary at Mini. The British firm is quite aggressive in terms of rents since a long-term rental over 36 months and 30,000 kilometers starts from 360 euros, without contribution, and with maintenance included. Mini is once again playing on a rather high residual value to reduce its rents.

The competition is not jostling at the gates for the moment. The Renault Zoe, which enjoys more autonomy (up to 395 kilometers) but which has no premium claims, attracts a lot of customers, while the Peugeot e-208, more expensive and with a rather decent range ( up to 340 kilometers), starts to make its hole, even if its prices (from 25,700 euros, bonus deducted) are higher than those of the Zoé (from 25,300 euros, bonus deducted).

What if the competitor of the Mini Cooper SE was instead the original small Honda e? Why not, but with 153 horsepower for its most powerful version, around 211 kilometers of range and 32,000 euros, bonus deducted, the little Japanese girl is paying a heavy price for her originality.