While its 3D Touch variant is ditched by the latest iPhones, Force Touch and its pressure levels could make a late entry to the MacBook Pro’s Touch Bar. Apple reportedly working to integrate pressure levels into its touch bar

The Touch Bar of the MacBook Pro could soon take advantage of Force Touch and its pressure levels // Gamesdone: Apple

Technology in distress on iPhone, Force Touch was generalized there in 2015 through its 3D Touch variant, before being replaced by the Haptic Touch functionality on the iPhone XR, then on the iPhone 11 and their successors. We learn today that if the pressure level detection technology has given way on Apple smartphones, it would be on the verge of pursuing its career on the Touch Bar of the MacBook Pro, in addition to the Trackpad which also uses.

At least that’s what a patent application filed by Apple in May 2019 with the USPTO suggests (request made public on November 26). We discover that Force Touch could be used to allow new interactions with the Apple Touch Bar, which still lacks a bit of interest four years after its introduction on the brand’s high-end laptops.

In its patent, Apple describes Force Touch as technology that “ generally relates to electronic devices, and in particular to electronic devices having a display with a force sensor positioned at least partially around the display and coplanar therewith “. In this case, Apple mainly refers here to the secondary display device of MacBook Pro, namely the Touch Bar. A sketch also reveals the complete device integrated into the touch strip, with the Force Touch circuitry added above and below the Oled panel of the Touch Bar, as well as the contact detector necessary to interpret the various pressures exerted on bar. 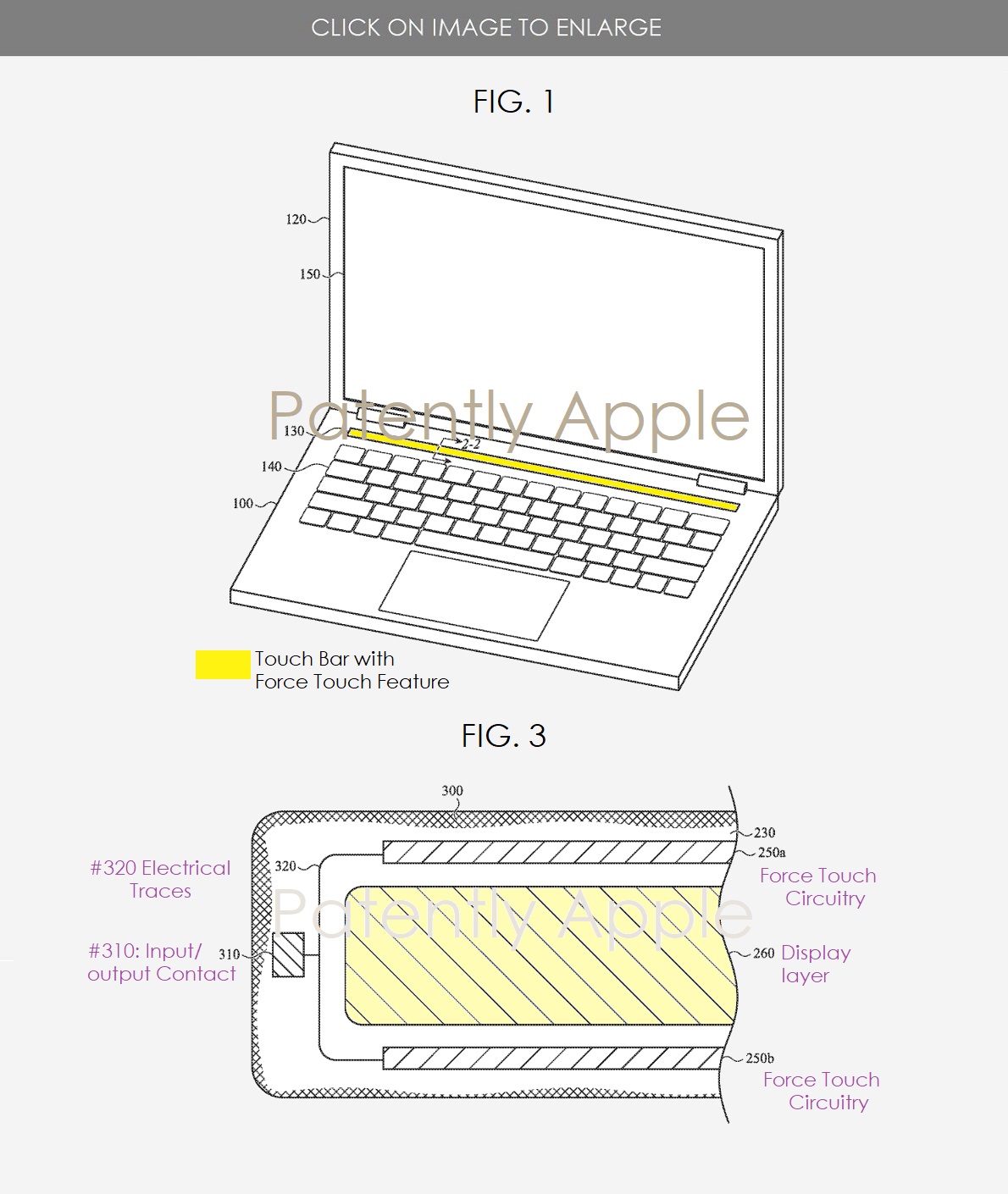 To make the whole functional, Apple will also have to cover the Oled touch strip of the Touch Bar with a slightly flexible coating to allow the Force Touch circuitry to take into account the more or less strong support of the user. As explained Patently Apple, this flexion may very well be imperceptible to the touch or to the eye.

It is not yet clear which features of the Touch Bar could benefit from the appearance of Force Touch, just as it is unclear whether Apple will deploy this technology on the touch bar of the MacBook Pro. It is in any case interesting to note that Apple was looking, until recently, for ways to improve the Touch Bar. Despite a fairly relative utility, the latter therefore seems well on the way to remaining permanently installed above our keyboards.