The first tests of the MacBook Air and MacBook Pro have been published. Boosted performance, record autonomy, problem-free compatibility … Did Apple keep all of its promises? 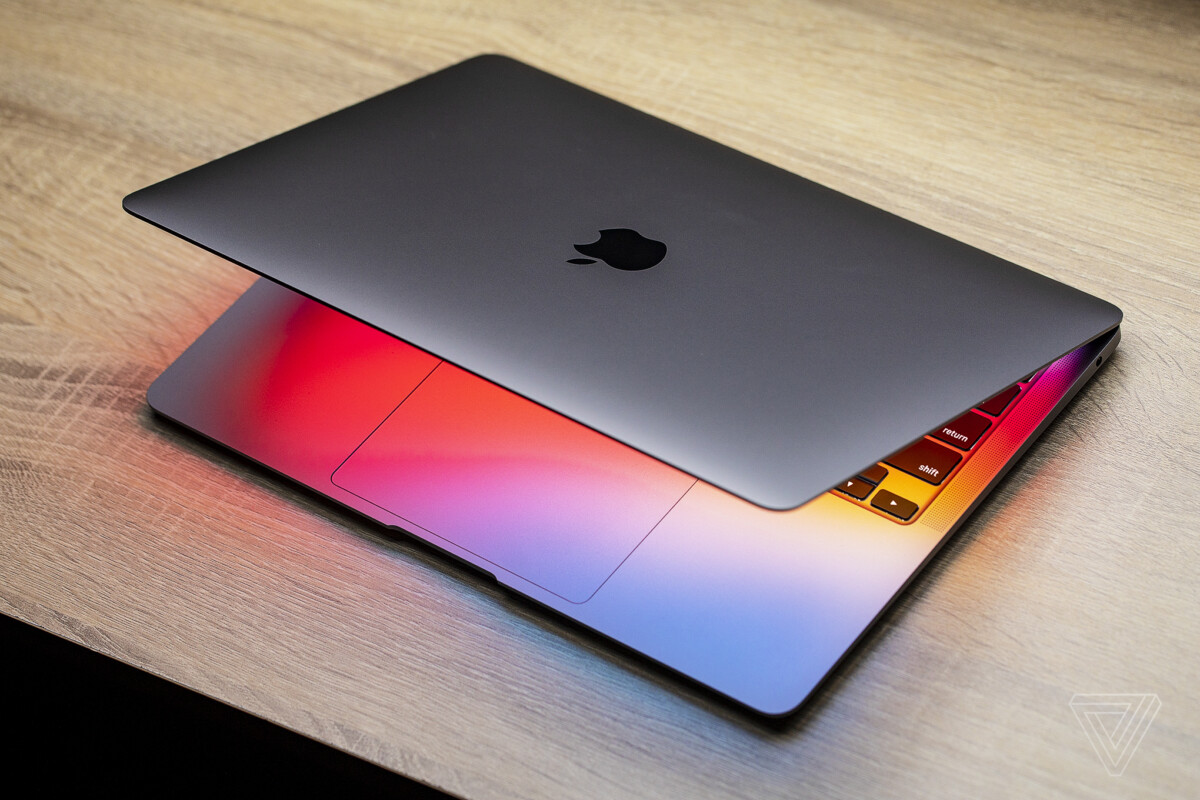 Apple unveiled the first three Macs with Apple M1 SoCs, two MacBooks, and a Mac Mini. After numerous leaks from benchmarks and testimonies, the first tests of the machines came out a few hours before the start of deliveries. We went through these tests.

According to Apple, the M1 chip has many virtues, materialized by a cloud of numbers. The CPU would be 3.5 times faster than the processor of the previous generation. Apple claims that its M1 is the processor with the best performance / Watt ratio, it seems that the autonomy is there to prove it. It’s time to put all this against user testing.

Ars Technica conducted the famous Geekbench tests, it is a benchmark which is primarily concerned with the performance of the processor (CPU). Remember that the TDP, the thermal envelope, of the Apple M1 is only 10 W, which allows a passive cooling system on the MacBook Air.

The comparison with the latest Tiger Lake solutions (11th generation of Intel Core) is therefore very interesting to observe: it is the CPU that equips the latest high-end ultrabooks from Dell or Lenovo. We had also tested the Dell XPS 13 9310 which uses the very recent Core i7 1165G7 (15 Watts) which is supposed to be one of Intel’s most powerful low-power chips. 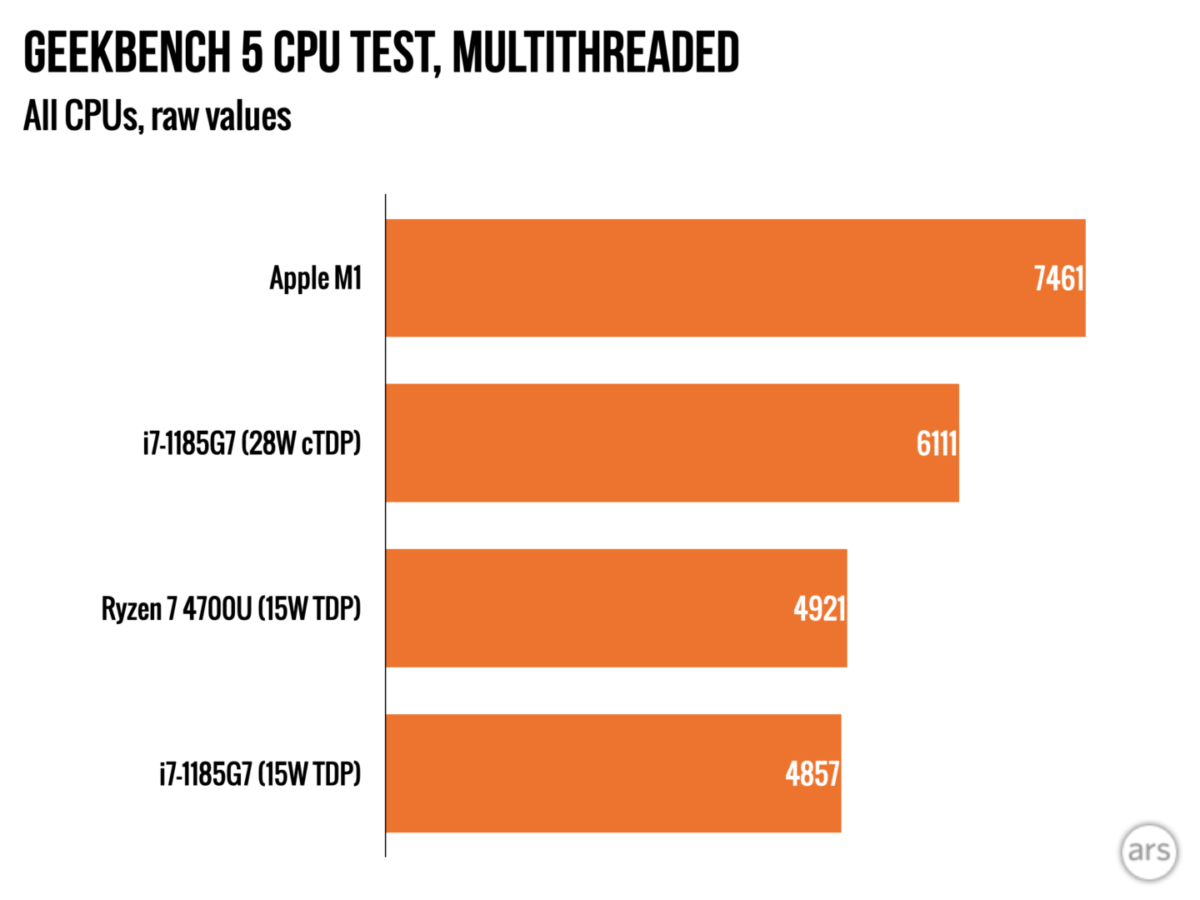 As much to say to you that the Apple M1 is far ahead of the low consumption chips of Intel and AMD. Even the 28 Watt TDP Core i7-1185G7 is beaten. Performance level, this Apple M1 even rubs against CPUs found in desktop computers.

Many other tests were carried out, including benchmarking in the web browser. It is a test that allows you to compare radically different architectures, because it measures a real task: rendering complex operations in a web browser. 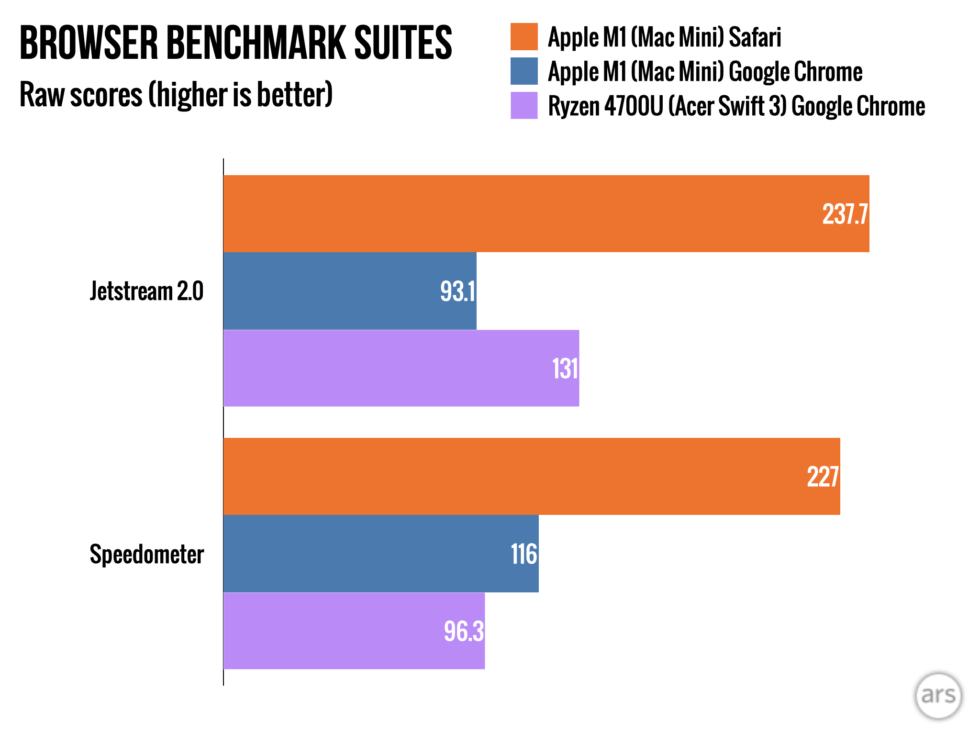 Once again, the Apple M1 passes these tests with flying colors. Little wonder, the iPhone and iPad were already very good and they share the same platform.

Note that most of the tests by American journalists focused on the MacBook Air, the most popular MacBook. Unlike the Mac Mini and MacBook Pro, this one is fanless. Its cooling system is passive, so it makes no noise. Engadget specifies it: “cis incredibly fast and completely silent, because it has no fan ».

To cool down, the MacBook Air’s CPU just lowers its clock frequency in order to emit less heat, all of the heat being evacuated by heat pipes (and not a fan as on the old MacBook Air). You will therefore lose performance in certain situations, such as during long calculations, nevertheless it is an appreciable audible comfort for working in silence. 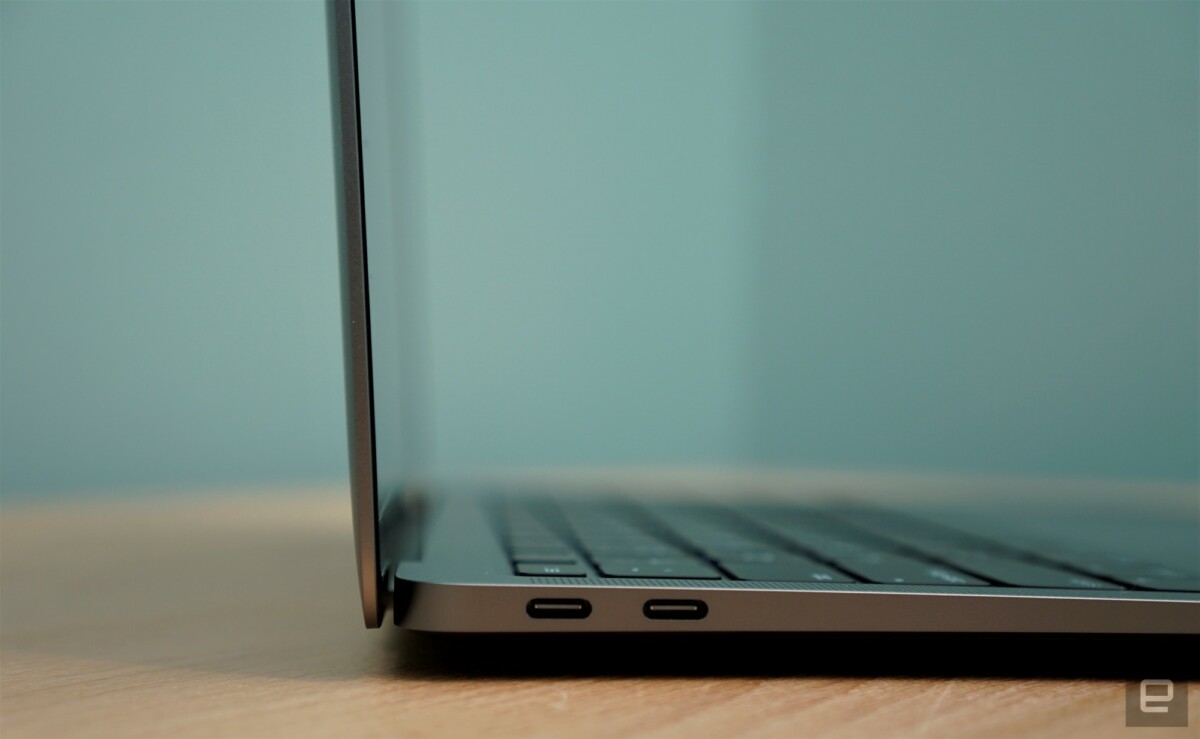 Mac’s SSD isn’t among the fastest, but Apple is catching up with its competition. The scores obtained, on average, are 1.8 Gb / s read and 2.1 Gb / s write. The latest Intel Macs were doing a lot less well with read speeds around 1 Gb / s. 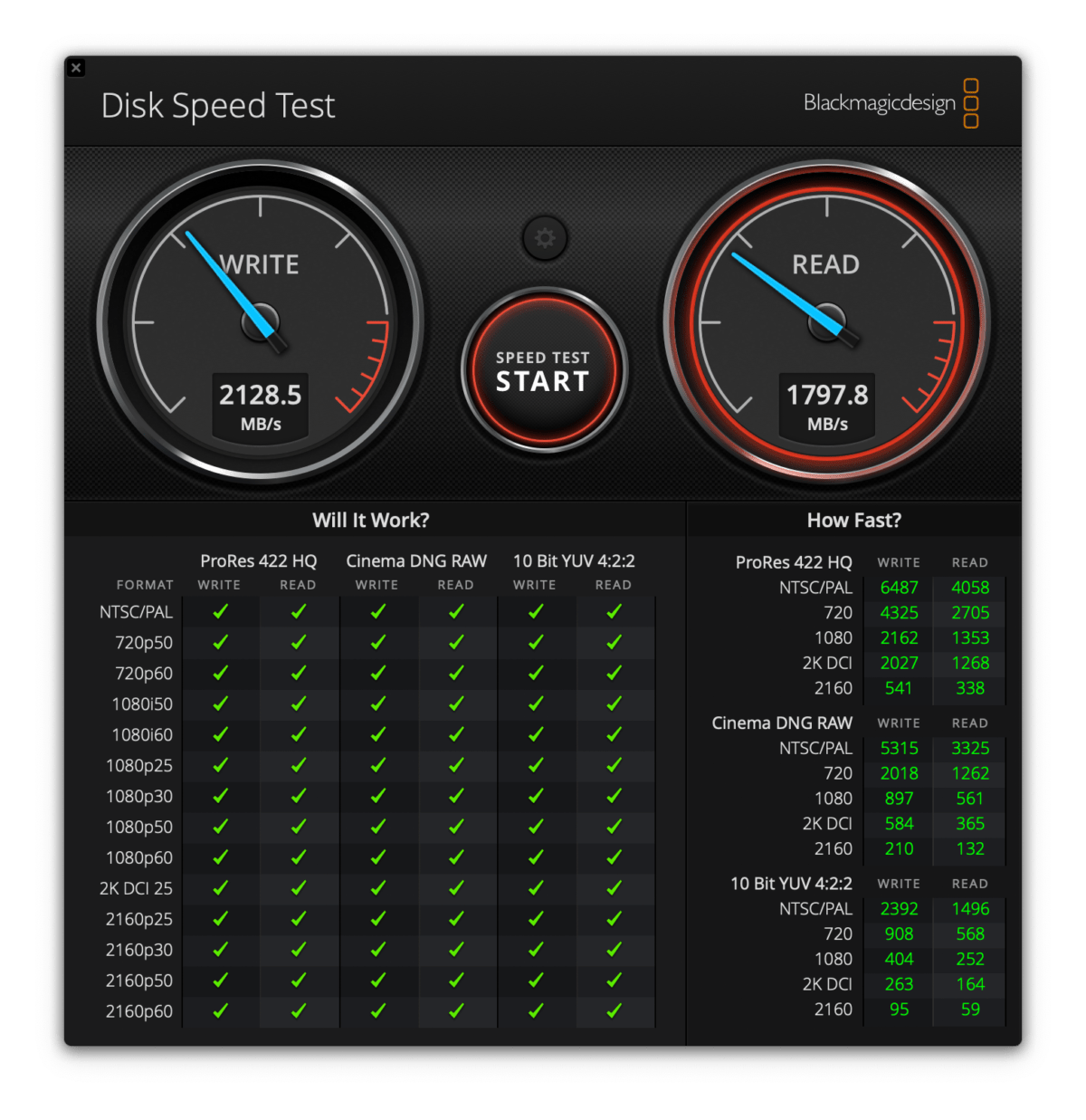 Finally, let’s talk about graphics performance. Apple has made a notable leap forward: “ the M1 also gives the MacBook Air something it’s never had before: decent gaming performance “. You’re still limited to the catalog of Mac games, but the M1 Macs are able to run them well.

“It even managed to run Fortnite at around 60 fps while running at 1400 by 900 pixel definition at high graphics settings. In comparison, it ran at around 40 fps with Intel’s Iris Plus graphics on the latest MacBook Air. “ – Engadget

However, it should be noted that some games do not work, as they depend on the Rosetta 2 virtualization layer: ” After big claims about the cult new Baldur’s Gate 3 RPG running on M1 Macs, I was unable to get the Mac version to work through Steam – I got an error message on each of the M1 Macs I have testedAccording to Cnet US.

As expected, compared to the autonomy figures communicated by Apple, there are differences with the performance obtained by the external test protocols. In any case, the new MacBook Air M1 and MacBook Pro 13 M1 largely exceed 10 hours of use, while the previous Macs did not exceed 8 hours on this same protocol designed by YouTuber Dave Lee. 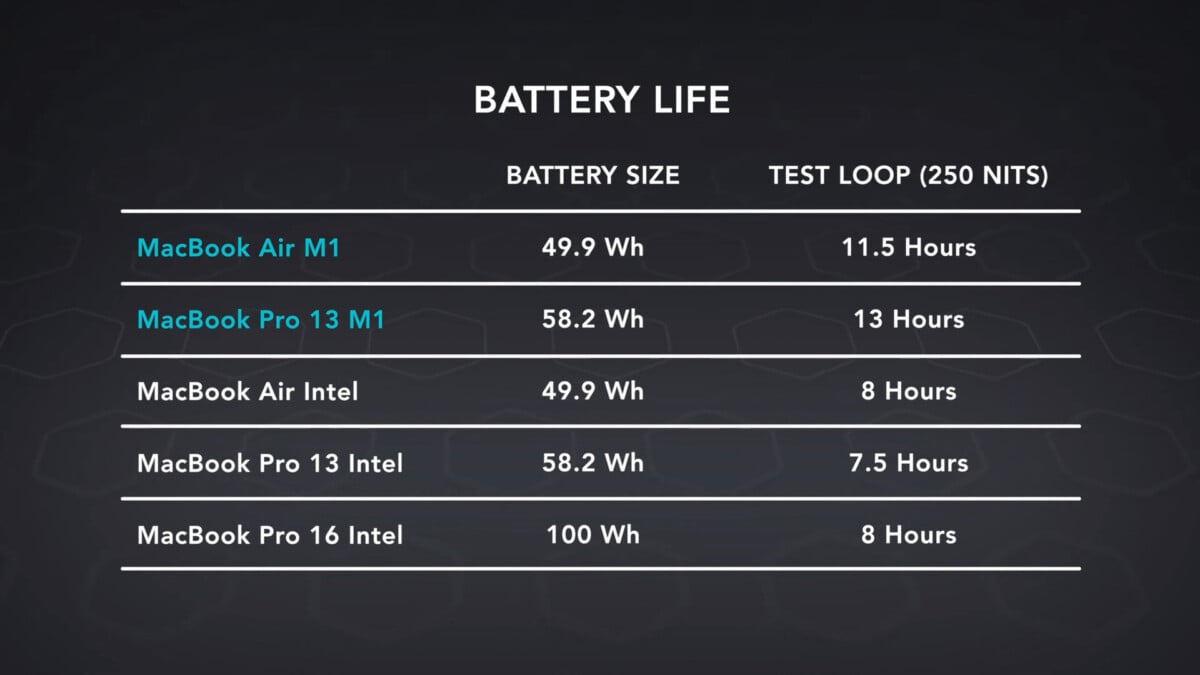 According to Numerama, “ 10% of battery corresponds to approximately one hour of use, without sparing the device. “. Results which prove that Apple was right to invest in the ARM architecture which offers a much better performance / Watt ratio than the x86.

As discussed in this article, the change in ARM architecture brings complications for publishers and developers who previously designed their games and software on an x86-64 platform. Developers must provide universal applications capable of running on both Intel Macs and Apple Silicon Macs (M1). In the meantime, Apple has designed an emulation layer named Rosetta 2 which translates x86-64 instructions into ARM.

While the DTK (the Mac Mini that served as an Apple Silicon test for developers) showed some weaknesses on non-universal apps, the Apple Silicon M1 is doing much better. Apple seems to have improved Rosetta 2, this means that there are a lot of apps and programs that work on M1 Macs that are not designed for these machines.

«Rosetta 2 emulation technology helps with this, it installs automatically the first time you try to install a non-native app. So far, this has allowed me to install things like Adobe apps including Photoshop and Premiere Pro, Steam for games, and Google’s Chrome web browser.» — Cnet US

Even on games, including World Warcraft, but also greedy software like the Adobe suite (in non-universal application). “Even the World of Warcraft video game, which launched for an hour at native definition, running admirably well, only pushed fans to barely audible power.», Explains Julien Cadot on Numerama. 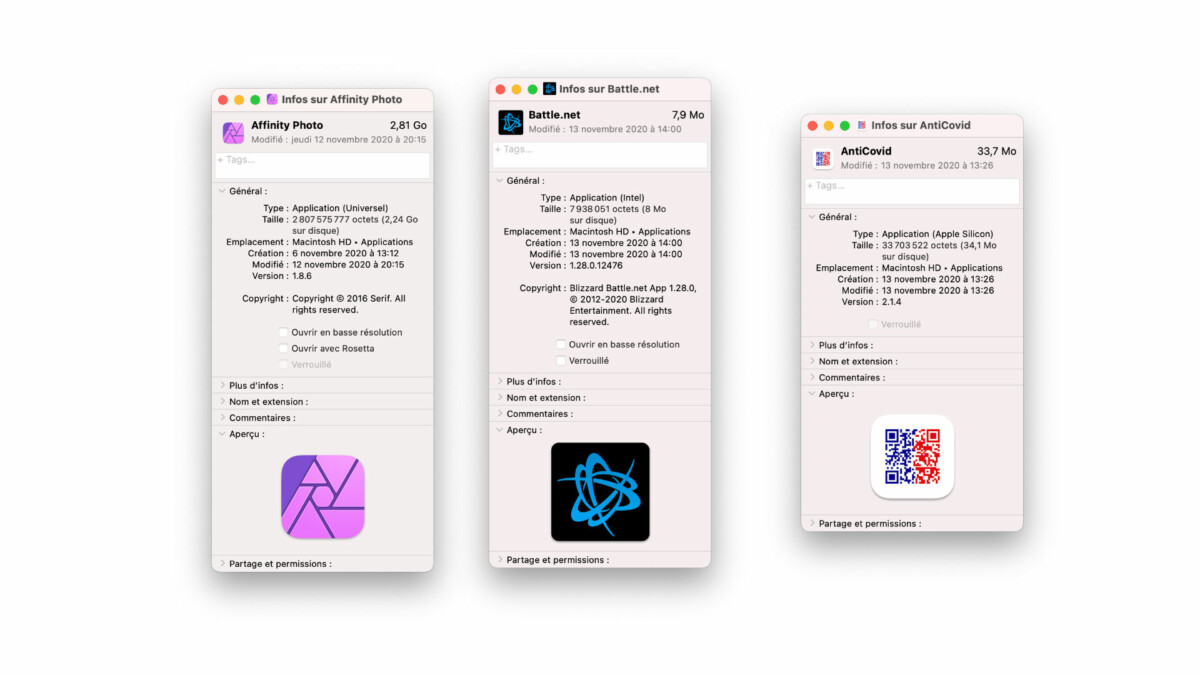 To know if an application is native (Universal), emulated (Intel) or comes from iOS (Apple Silicon), just right click and Read the information // Gamesdone: Numerama screenshot

While waiting for the universal applications to arrive, most of them still in beta, the Mac M1 will be able to run a large majority of programs and apps. Only some virtualization programs are non-functional, which is important to note if you regularly use these tools. This is also the case for some games, the testers manage to run Blizzard games for example, but many Steam games do not even launch.

Also, note that the M1 Macs can launch iOS and iPadOS apps found on the Mac App Store. It sounds like the ability of Chromebooks to launch Android apps. As explained in this article, you will not find all the apps: there are apps that are missing, because they rely on smartphone functions, such as GPS, other apps have been deliberately withdrawn by publishers such as Facebook for example.

According to The Verge, for business users, Apple still needs to make improvements to increase performance for heavy workloads. You can’t use an external graphics card, and you’re limited to just one external display at a time, for example, and it’s likely that a pro will hit the limits of an integrated GPU (iGPU) fairly quickly.

Despite all that, the MacBook Air got one of the best marks on The Verge, 9.5 out of 10… it could even have been 10/10. Half a point lost because of the webcam blocked in HD definition for many generations of MacBook Air. Numerama notes, however, that there is a difference between the images of an Intel MacBook Air and an Air M1.

Ars Technica note «a leading design that combines high performance and high efficiency“. In its first conclusions, the Apple M1 can nevertheless be overtaken with solutions with more cores andthreads… To the detriment of energy efficiency. Apple has been able to create an ARM system that competes strongly with x86 even at very high performance levels.

For Numerama, this lays solid foundations for the Apple Silicon strategy: “when the Cupertino giant will tackle higher ranges next year, meeting other needs, it will already start with a head start».

Engadget explains that it is finally a way to differentiate Macs from Windows PCs: “mNow, there are more additional reasons to go for a Mac, beyond a slightly different operating system and Apple’s excellent build quality. The M1 chip makes the MacBook Air one of the fastest subnotebooks you can buy today. And even the biggest Windows fans will find it hard to deny it. ».

Finally, Tom’s Guide US notes that it is a pity that the design of the MacBook Air has not changed. “If only it incorporated a few more ports and reduced its bezels, the new MacBook Air could be perfect. ».