To go hand in hand with its PlayStation 5 and the promise of immersive 3D sound, Sony has unveiled the Pulse 3D headset. A design reminiscent of the new console and a product focused on sound and immersion, with a very light price. 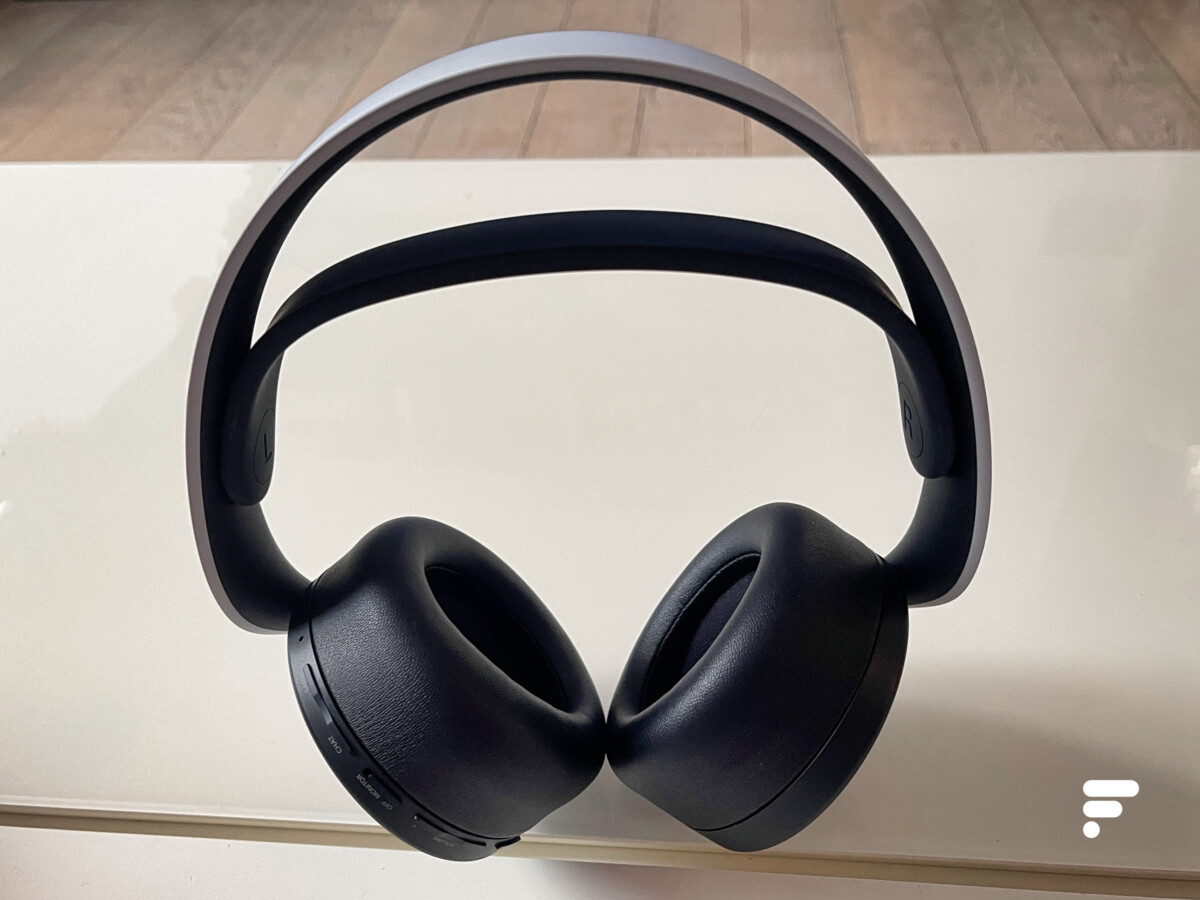 With the PlayStation 5, Sony has unsheathed a whole galaxy of accessories. There is obviously the DualSense controller, a remote control, but also a headset called Pulse 3D to take full advantage of the console’s promise of 3D hearing immersion. At 99 euros, is the bet of Sony, specialist in headphones, successful for gaming? We lent an ear to the newcomer.

Original, but a little plastic feeling

When we see it for the first time, there is no doubt that it is above all made to go with the PlayStation 5. The Pulse 3D is a wireless headset that uses its futuristic white and black design to complete the look. Perfect outfit for the little PS5 gamer.

It is composed of a white plastic hoop integrating at each end the circum-aural imitation leather headphones which will encompass your ear. These are not carried by flexible rods, but rather connected to the hoop by a large plastic blade with a little play to adjust it to the morphology of your head. The design of the whole with the final curvature of the arch that encompasses the atrium would at first glance make you want to position it upside down, but you have to put the white arch outwards.

As a reminder that it goes with the new generation console from Sony, we find the PlayStation logo on each branch and, inside the hoop, the texture of the controller and the console-like grip with the micro logos of the keys of the lever (square, triangle, cross, round) in relief on a black background.

First surprise, there is no adjustment possible. It is in fact the inner black silicone band that will adapt the wearing of the helmet. It is in fact the real variable of adjustment for the wearing of the helmet with an amplitude of approximately 3 to 4 cm. It’s strange at first, but the result is quite effective and the Pulse 3D is comfortable to wear.

There is no foam reinforcement on the top of the head and this is surprising, but the silicone band thus avoids pressure by resting gently on the head, without pressing.

The very round shape of the ear cups can also be surprising. If you have rather large ears, be careful that it is not too small in size. Another sign that the Pulse 3D has not bet on its design: the pads are not interchangeable or replaceable.

As this is a headset for your console, it is not intended for outdoor riding. No folding or storage system is therefore logically provided. It does not have a planned base either.

Buttons to take in hand

In terms of the buttons, we find everything on the left atrium: on / off, volume, the USB-C charging port, the jack port, the button to activate the microphone, monitor activation (accentuation of voice feedback), as well as a slider to enhance the sound of the game compared to that of the cat or vice versa. Once you’ve got your bearings, the buttons are well-distributed enough to be easy to access. But it often happens, when wanting to reposition the headset, that we activate the chat / games adjustment buttons. 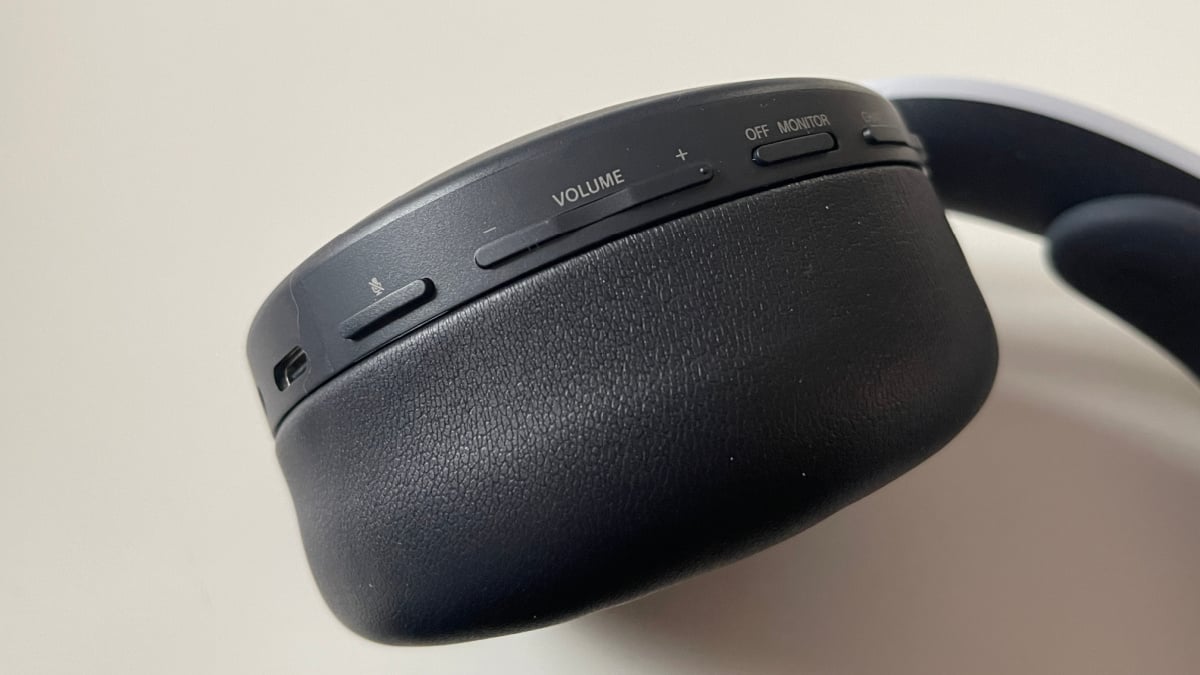 The buttons are all grouped together on the left earpiece of the Pulse 3D // Gamesdone: Frandroid – Melinda DAVAN-SOULAS

Two microphones complete the Pulse 3D which has the advantage of not having any protuberances to disturb the roundness of the general design. We could almost take the Sony headset for a traditional headset and not gaming.

If you want to connect it wired, a cable is provided. It can then be connected to the DualSense controller or to the Jack port of a mobile device. But obviously without taking advantage of the controls. 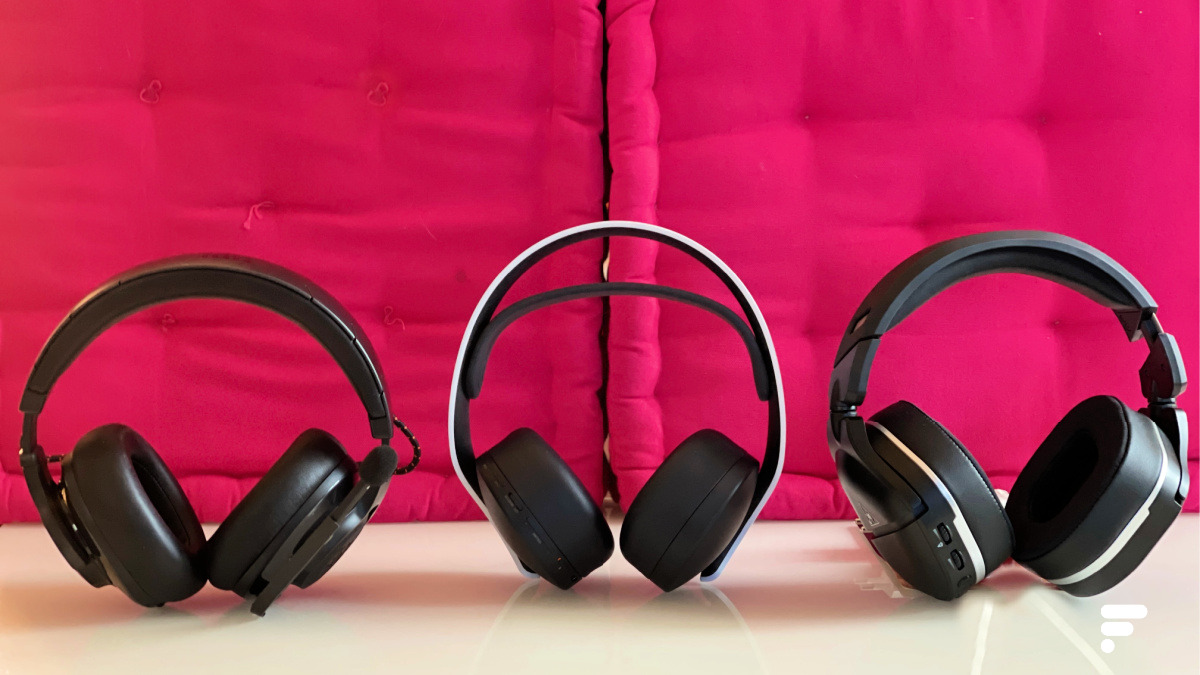 If the design is rather successful and sober, the whole is not particularly high-end and refined. The material is solid, but plastic and one can have a first impression of fragility. We are certainly far from the sometimes outrageous and enormous design of certain gaming headsets. But they have the merit of appearing stronger. The price positioning of the Pulse 3D is also a factor.

The Pulse 3D is a headset originally intended for use with the PlayStation 5 as well as the PS4 and the PSVR virtual reality headset. The consoles do not natively embed Bluetooth, it is not a headset intended for this use. So it does not work wirelessly with another device, smartphone or other to listen to music. It actually connects to your console through a dongle supplied to plug into the USB port of it to enjoy a 2.4 GHz wireless connection. Pairing is done simply by switching on the headset with immediate pairing. No other settings are necessary. In this, it is a small happiness. Right out of the box, it’s plugged in and usable without doing anything more than turning it on. 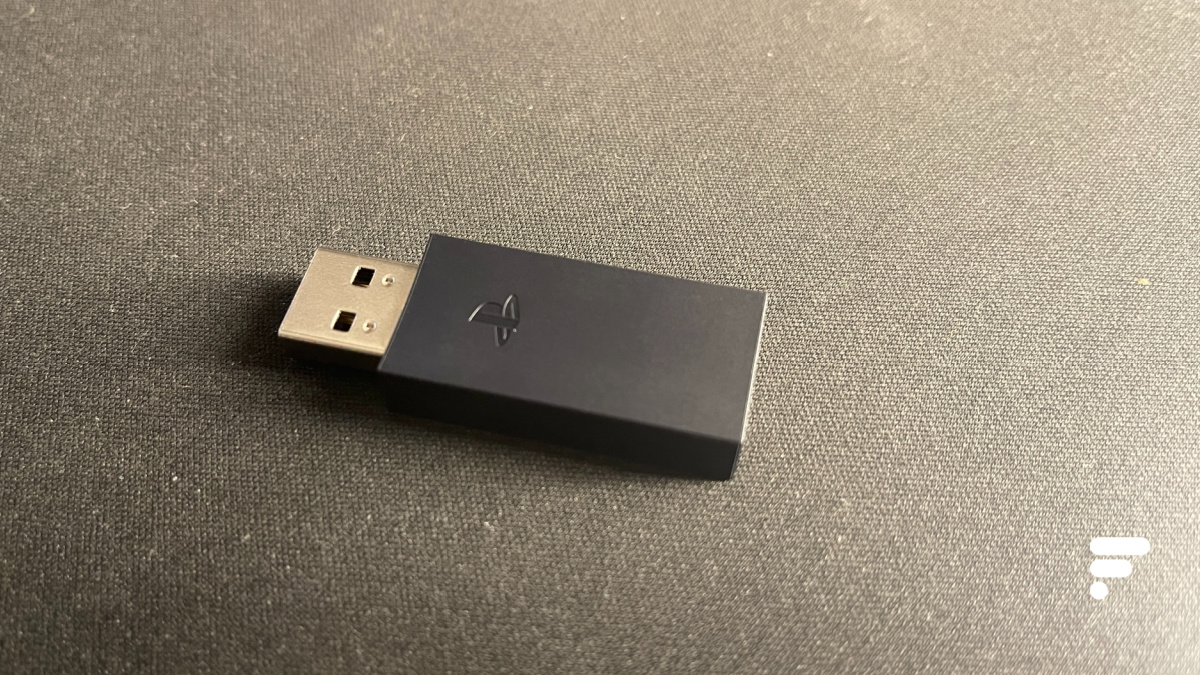 The dongle to connect the Pulse 3D headset to the PS5 // Gamesdone: Frandroid – Melinda DAVAN-SOULAS

Obviously, as a gaming headset, the possibilities are limited. There is no NFC for pairing, application for additional settings or active noise reduction. The thickness of the headphones and their structure serve as passive noise reduction in a way. It is far from convincing, however, and in a very noisy environment you will not be totally isolated. Note that the headset does not go to sleep when you remove it. But it ends up cutting itself after several minutes of inactivity. You will then have to turn it off, then turn it on again to reconnect it.

Thanks to the supplied adapter, it is also possible to connect your Pulse 3D headphones to a Windows PC or a Mac. You can then use it as a wireless headset.

The helmet is quite light (295 grams) and the weight is well distributed. You can wear it for a while before you feel it. It will therefore be the right companion for somewhat long playing sessions. If you wear glasses, you won’t be particularly embarrassed or oppressed. The pads make it nice.

3D sound at the rendezvous

The Pulse 3D has two 40mm drivers. 3D sound is present in the game thanks in particular to the Tempest 3D AudioTech technology designed by Sony for the PlayStation 5 (with compatible games). Whether you are in the middle of a crowded street scene in Spider-Man : Miles Morales, at the heart of the fighting in Assassin’s Creed Valhalla or immersed in the dark sound environment of Demon’s Souls with its multiple sometimes disturbing sounds that spring from all sides, we can clearly perceive the origin of the noise and we have the impression that the sound is surrounding us. It’s quite immersive and the promised promise is kept.

About the game Astro’s Playroom, PS5 experience, the headset also puts the best forward Tempest 3D AudioTech technology, with its multitude of noisy surfaces (snow, sand, grass, earth …), elements and enemies that come from all the sides. We can feel the sound passing from one ear to the other depending on the events on the screen. 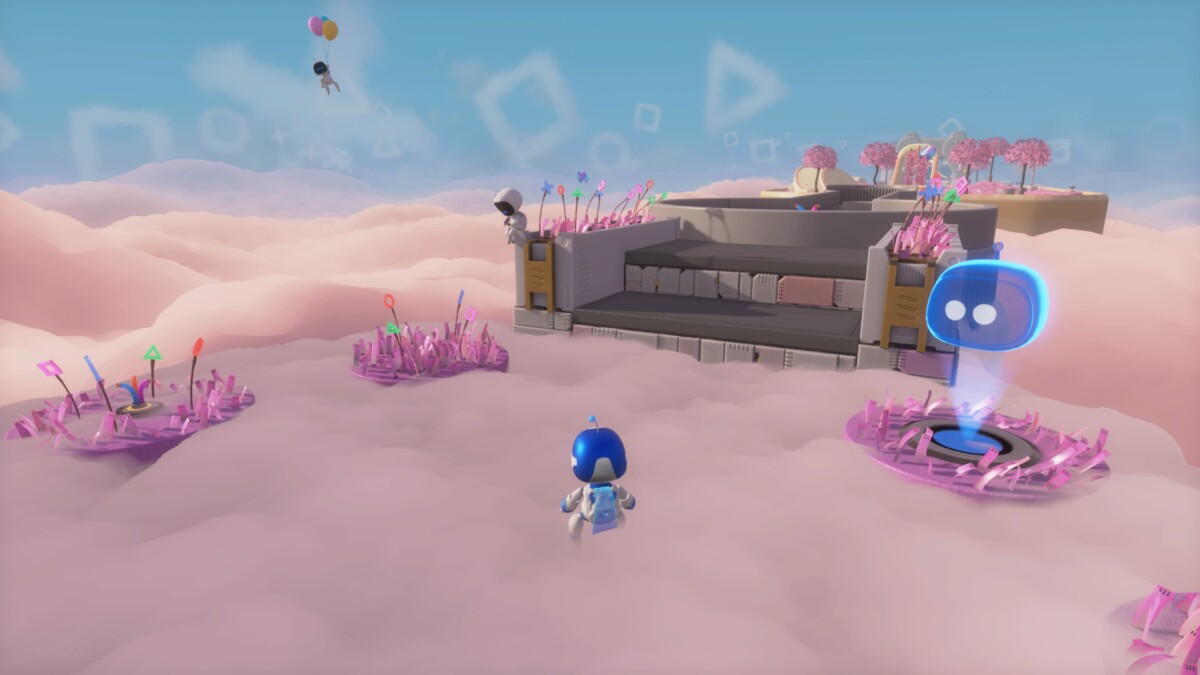 Obviously, there is no lag between sound and image thanks to the 2.4 GHz wireless connection which promises almost non-existent latency. The proposed audio is thus clear and balanced, the elements on the screen are easily detailed, even those in the background. In games where the music can be marked, our ears are not attacked by the bass. The experience is very pleasant and we gain much from the simple sound of TV, with a real impression of being at the heart of the game from a sound point of view.

If you want to tweak the sound, you can go to the console settings. On PS5, you will be able to set your 3D audio profile among 5 variations (from highest to lowest).

You can choose from 5 3D audio profiles on the PS5

The headset is also very nice to enjoy a movie on a service. streaming available (Disney +, Netflix or Apple TV) or on Spotify from the PS5, with quality sound. But it can also work via its dongle on computer and Mac, by adjusting the volume from the headphones. More than just a gaming headset for PS5 (and PS4!).

We will nevertheless temper the enthusiasm a little. We are talking about a helmet at 99 euros. And for that price, the quality is very good. But don’t expect a hi-fi experience. The spatialization is pleasant and of quality, but it has room. Some PC headsets with surround sound are more impressive (notably the JBL Quantum One). There is no doubt that Sony should soon release an improved version at all levels to complete the experience.

Two microphones with background noise reduction are integrated into the headphones, on the left ear cup. They thus avoid having the traditional physical microphone in front of the mouth and are even particularly discreet. The voice output is quite clear and the listening of your interlocutor is not disturbed by background noises which are attenuated. It is possible on the buttons on the top of the left ear cup to adjust the voice mic / game sound balance. And if you need to modulate the mic better, you can do that from the Sound settings. 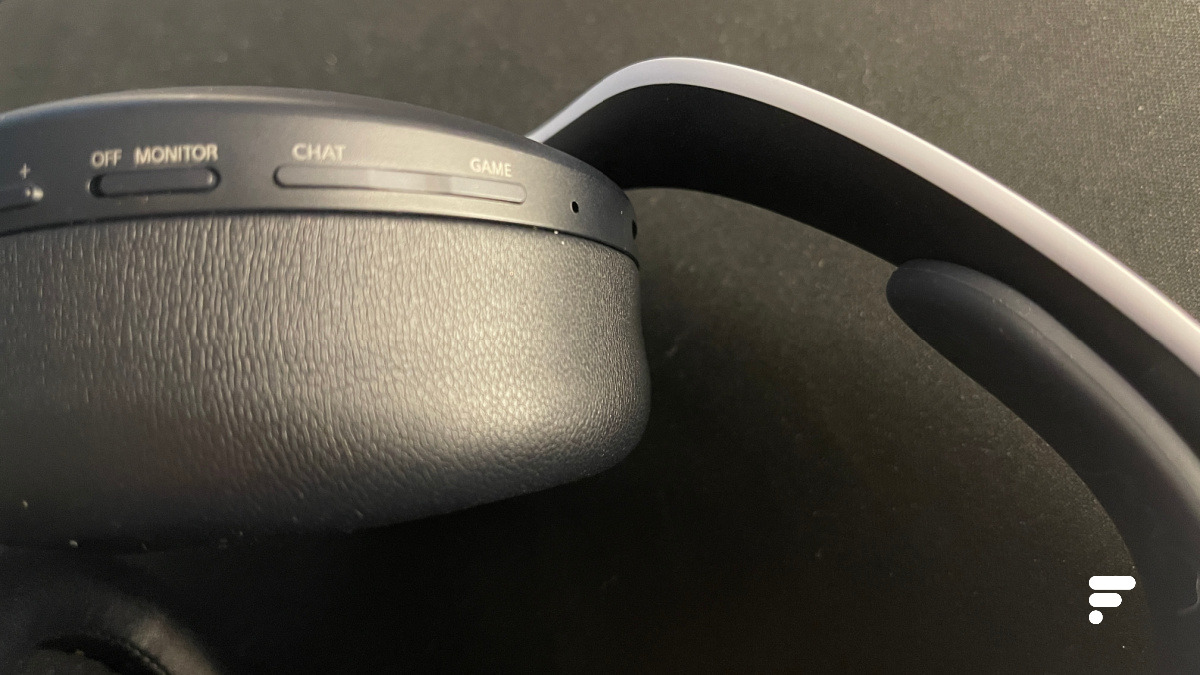 The two microphones are positioned on the left earpiece at the top to be discreet // Gamesdone: Frandroid – Melinda DAVAN-SOULAS

The Pulse 3D announces 12 hours of autonomy. Depending on the intensity of the game, the wireless headset rather flirts with 10 hours, with normal volume and without a cat. This is significantly less than the Stealth 700 Gen 2 from Turtle Beach which displays 20 hours and is really tough. If you opt for conversations with your friends, the autonomy of Pulse 3D can even drop quickly. It will then need to be recharged with the supplied USB-C cable.

For the full recharge, count 3:15, which is a bit long for a headset with such a reduced battery life. 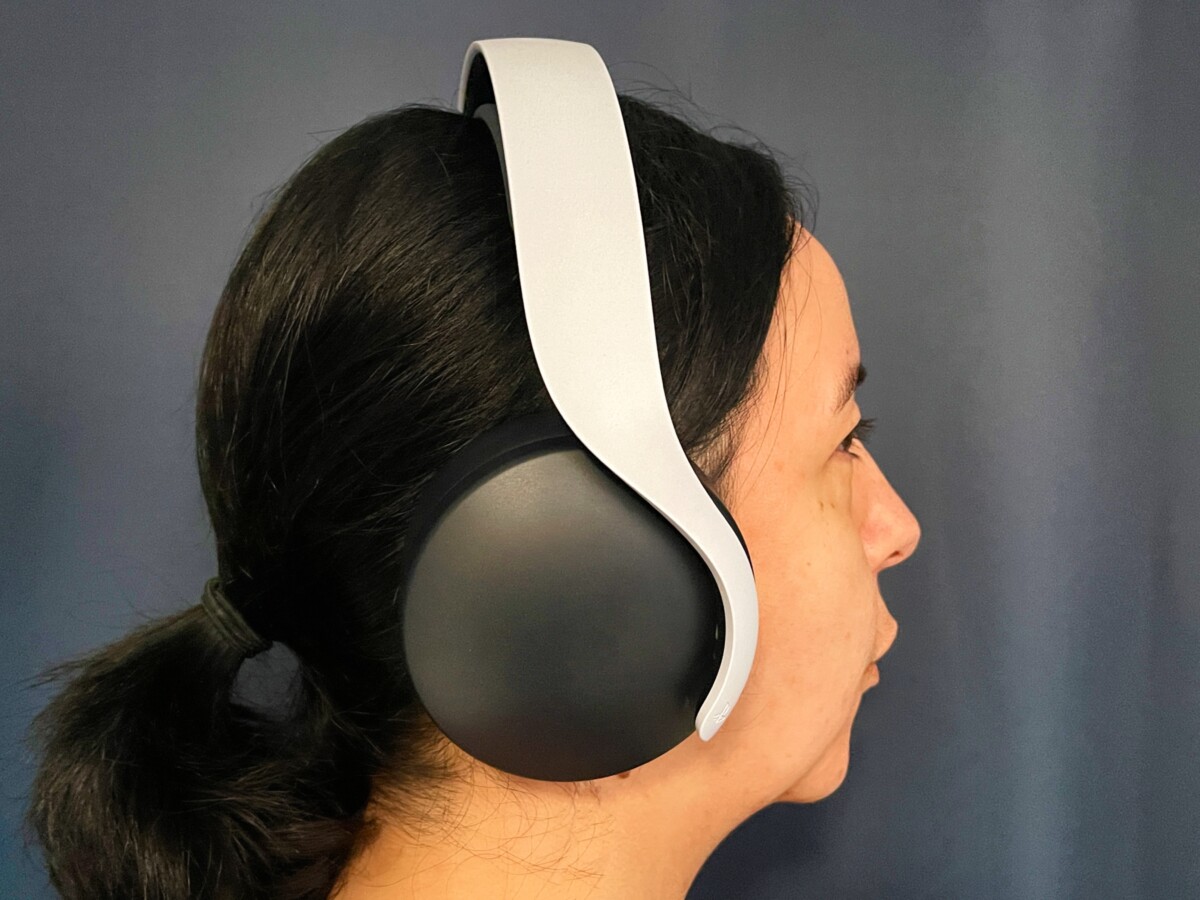