The Kyocera DuraForce Ultra 5G is a rugged phone that doesn’t require you to give up too many modern conveniences to gain the benefits of extreme durability. It’s common for rugged phones to feature older processors and lack modern features — these phones often have specialized uses, like barcode scanning or taking payments, and more or less just need to keep working in harsh environments.

The DuraForce Ultra 5G includes both the durability of a rugged phone and modern features like 5G, wireless charging, a high-quality processor, and dual rear cameras. At $899, it’s an expensive phone — you can buy a very nice non-rugged phone for that much — but if durability is a must and you don’t want to sacrifice performance or convenient features, the DuraForce 5G is (quite literally) a solid choice. 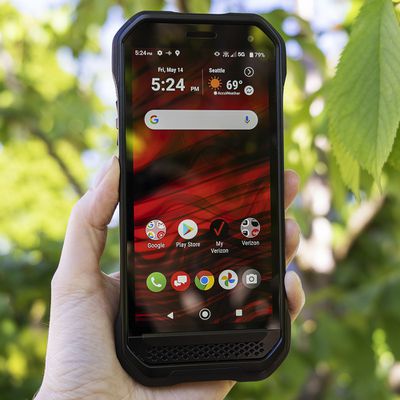 Pick up the DuraForce Ultra 5G and you’ll know right away that you have a rugged device in your hands. The top and bottom of the phone are wrapped in thick plastic bumpers, the sides feature a texturized finish, and at 278g (9.8oz) it’s much heavier than your standard smartphone. The screen itself isn’t very big — just a 5.45-inch 1080p LCD panel — but the sizable bezels and thick chin make it a chunky device overall.

Despite its dimensions it’s actually easy to use one-handed, since the screen itself is relatively small. The phone will fit in a jacket pocket, but it’s too bulky for any of my jeans pockets. Haptics are aggressive, even at the “medium” default setting, which is a good thing in a phone you might be using with gloves. Otherwise, you can turn touch vibrations down to low or off.

The phone is both IP65 and IP68 rated, meaning there’s generous protection against water intrusion both from jets and immersion (up to 6.5 feet for up to 30 minutes). The DuraForce Ultra 5G meets the Military Standard 810H specifications and includes protection against vibration, blowing dust and sand, extreme temperatures, drops from five feet onto concrete, high altitudes, and plenty of other hostile conditions.

Aside from some minor scuffs acquired in the driveway test, the DuraForce Ultra 5G merely shrugged at my efforts and kept on working just fine

I couldn’t test it against all of those conditions, but I did subject the phone to plenty of abuse including an hourlong stay in the freezer, water immersion for 30 minutes in the kitchen sink, exposure to sand, and a drop from about five feet onto driveway asphalt. Aside from some minor scuffs acquired in the driveway test, the DuraForce Ultra 5G merely shrugged at my efforts and kept on working just fine. Kyocera does include a two-year warranty with purchase, so as long as you use the phone within the conditions it’s rated to withstand, you shouldn’t be putting your purchase at risk.

In addition to rugged features, the DuraForce Ultra 5G is just loaded with buttons. There’s a power button with embedded fingerprint sensor, three programmable keys, and a large volume rocker that’s easy to press with gloves on. I frequently pressed one of the programmable buttons accidentally when I grabbed the phone — they’re in easy reach when you’re using the phone, but that unfortunately means a lot of unintentional presses, too. These buttons do require a long press to bring up whatever shortcut function you’ve assigned to them, so a brief press won’t do anything. You can also assign any of them to “do nothing” when pressed if you’d rather not use them.

Aside from the obvious difference in appearance and ergonomics, the DuraForce Ultra 5G handles pretty much the way any other Android device does. The screen looks a little low on contrast in comparison to your standard display — likely because the panel is optimized for viewability in bright sunlight. That’s probably more important to the phone’s target user than a rich multimedia viewing experience, and the panel is indeed usable even in very bright direct light.

The screen’s protective “Sapphire Shield” remained free of scratches during my testing, but it does pick up reflections easily outside, more so than other phones with Gorilla Glass. It wasn’t enough to bother me, but someone planning to use the phone outside in bright light often might find it distracting.

The DuraForce Ultra 5G ships with Android 10; Kyocera says it will provide an update to 11, but that the timeframe is still being determined. Android 10 is fine for now, but given that Google is readying Android 12 for the public, it’s definitely a step behind. Kyocera says it will provide a minimum of two years of security updates, which is a common if not terribly generous policy.

The DuraForce Ultra 5G uses a Snapdragon 765G processor with 6GB RAM, which puts overall performance on par with a midrange phone. There’s some slight stuttering when scrolling quickly through screens with lots of images and video, and a noticeable pause after taking a photo in the camera app, but other than that it keeps up well — especially considering the lower performance bar in the rugged class.

There’s a 4,500mAh battery built into the DuraForce Ultra 5G. It’s a comparatively large battery for the class, and it got me through a full day of moderate to heavy use. The phone supports Qi wireless charging, which is uncommon among rugged phones. The phone was a little finicky on my stand-style Belkin wireless charger, but it eventually worked when set on the charger in landscape orientation.

And of course, there’s one of the DuraForce Ultra 5G’s namesake features: 5G. This model works with both widely available sub-6GHz frequencies and hard-to-find but much faster mmWave spectrum (also called Ultra Wideband by Verizon, hence the UW in the phone’s name). It’s only sold through Verizon in the US, which makes sense: the company has been pushing mmWave much harder than the other major carriers and does offer more coverage, though it’s still relatively scarce. Verizon’s 5G network is kind of lackluster overall at this point, though it will improve over the next couple of years. It’s a good feature to have on a phone you’re going to hang onto for a while, but definitely don’t buy this (or any phone, really) just for mmWave since you’ll probably have a hard time finding a signal anyway.

The DuraForce Ultra’s rear camera array consists of a 24-megapixel f/1.8 standard wide and a 16-megapixel f/2.2 ultrawide, plus a time-of-flight sensor. Around front, there’s an 8-megapixel f/2.0 selfie camera. That’s a cut above what’s offered on many rugged phones. Picture-taking likely isn’t a high priority for prospective DuraForce Ultra owners, and image quality is certainly not up to what you’d find on conventional $900 phones, but it does the job.


Photos in good light look fine, if a bit on the low-contrast, washed-out side. Exposure and color can shift noticeably between two images taken with the same camera at slightly different angles, and I noticed some odd misses here and there, like a blurry shot of a static subject where it looked like the camera had tried to apply too much HDR. But most of the time in bright light, photos are perfectly fine, and a cut above what I’d expect from a rugged phone.

There’s also a mode that will overlay live information on your still image or video about whatever extreme situation you happen to be in, including location, altitude, speed, and G-force. Extreme activities are generally not recommended in your second trimester of pregnancy, so I didn’t really test this out. I imagine if you’re into something like mountain biking or climbing and you want to record that kind of information with your activity, you probably have a better way of doing so already. In any case, it’s there, and it’s definitely more of a casual, fun feature than it is practical.

If you’re merely curious about living a rugged phone lifestyle, the DuraForce Ultra 5G isn’t for you. The phone’s extremely hardy specifications would be appealing to anyone who’s nervous about dropping their phone or occasionally brings their phone to rough environments like beaches or backcountry camping. If that’s you, spend your $900 on a good standard phone (many are IP68 rated) and a rugged case. You’ll get better performance, a better camera, timelier software updates — basically, a lot more for the money.

The inclusion of 5G, wireless charging, and processing power that’s a cut above the rest of the class makes it a good tool on and off the job site

If you need a rugged phone on the job as a frontline worker, first responder, or construction worker, for example, then the DuraForce Ultra 5G makes a lot more sense — especially if it’s going to be your primary phone off the job and you’d really like some extra bells and whistles. The inclusion of 5G, wireless charging, and processing power that’s a cut above the rest of the class makes it a good tool on and off the job site.

However, $900 is an awful lot to spend on a phone, and I think that very specific kind of customer for this phone is a pretty small group. You could buy a less expensive rugged phone with more limited functionality like Kyocera’s own DuraForce model from last year and a darn good midrange phone for around the same price. You probably can’t get mmWave 5G that way, but that’s no great loss.

Still, the DuraForce Ultra 5G represents a convenient option for a particular type of person if two phones feels like too much fuss. It certainly handled everything I threw it at, and functioned well as a daily companion for more pedestrian tasks like scrolling social media and navigating trips across town. If extreme durability is a must and you don’t want to give up too much to get it, then the DuraForce Ultra 5G is a good choice.

Photography by Allison Johnson / The Verge