Presented in more detail last week through an overview of its interface, HarmonyOS 2.0 is Huawei’s response to the suspension of Google’s services. An answer that could finally go into service faster than expected …

HarmonyOS could arrive faster than expected on some Huawei and Honor smartphones // Gamesdone: Huawei

Last week, Huawei took the time to show us the interface of its new HarmonyOS 2.0, at least the version designed for smartphones. The opportunity to discover a system, fluid, rich in widgets and designed to facilitate interconnection between all Huawei devices: smartphones, tablets, connected watches, headphones or even televisions. At the end of this presentation, Huawei also gave more details on the eligible devices and mentioned a gradual deployment before the end of 2021.

We learn today that the Chinese manufacturer could begin this deployment faster than expected on some of its smartphones, but also on some models of its former subsidiary Honor. This arrival express HarmonyOS 2.0 would be done on the other hand first on relatively “old” devices.

It is in any case what a tipster said a few hours ago on the Chinese social network Weibo. We read on his post that because of a “smooth development“, The range of Huawei P30, but also the Honor 30 and V30 will be the first served by HarmonyOS 2.0, infused in June on these different models. This deployment would take place about a quarter before the time slot initially planned by Huawei, notes GizmoChina. 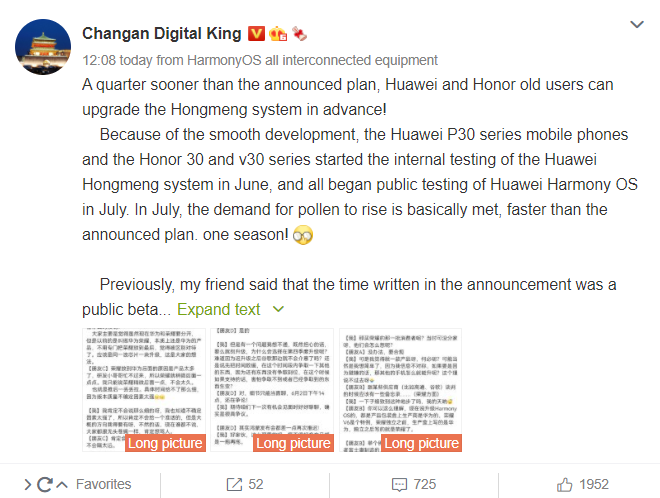 A little later, this time in July, Huawei would apparently enter the beta phase for HarmonyOS on its other, more recent devices. Also according to GizmoChina, three R&D teams would work in turn and working overtime to launch HarmonyOS 2.0 as soon as possible, especially with long-time users.

Note all the same that this information is not confirmed at the time of writing these lines. Caution therefore remains in order. That said, if Huawei is indeed ahead of its schedule, we should learn more from official sources in the coming days.