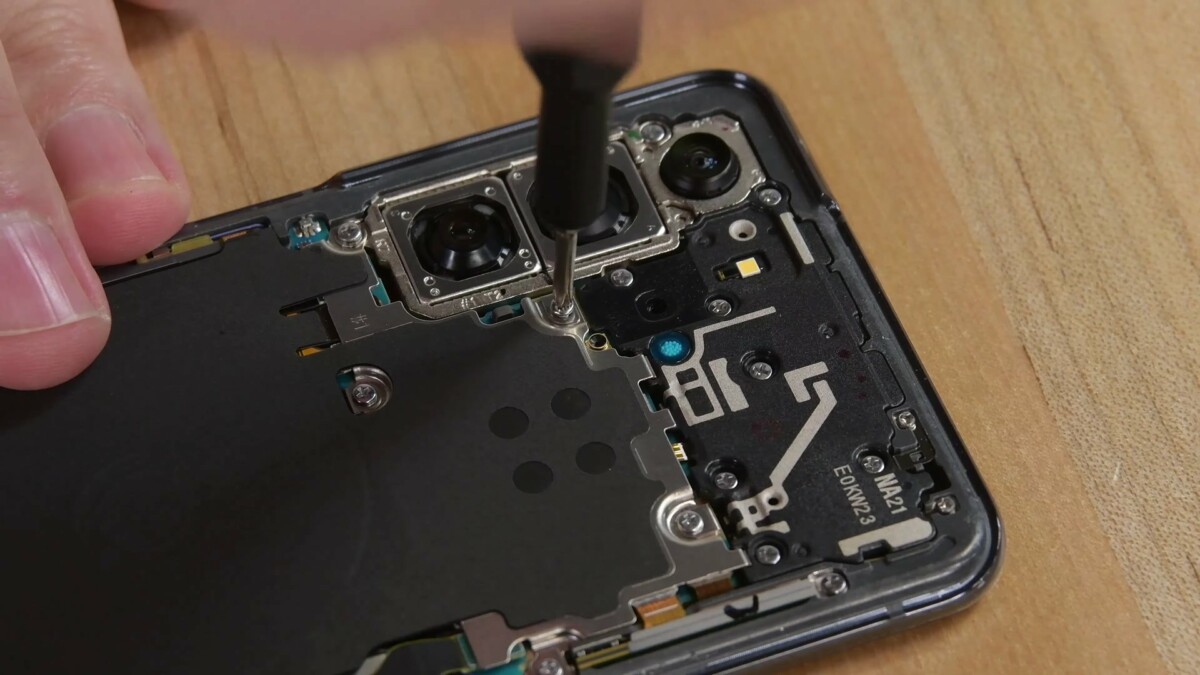 Is the Samsung Galaxy S21 easy to repair? This is apparently a point that is debated, opinions differing according to the people questioned.

Renowned repair specialist, iFixit, took the time to take the new Korean flagship apart to read its guts like an oracle predicting what will happen to your phone if you ever drop it to the ground once too much. Overall, the Galaxy S21 gains in repairability and therefore scores a point higher than the previous generation: 4/10 versus 3/10.

According to iFixit, the plastic back makes repairing easier (less risk of breakage), while using Philips screws throughout the phone reduces the number of tools you need to have to repair the phone. In addition, many elements are modular, making it easier to repair a particular point.

Nonetheless, the two most common repairs, namely screen and battery replacement, are considered to be “unnecessarily complicated“. For example, simply removing the glass on your screen has a (very) high chance of damaging the OLED panel. If you break this glass, then the entire screen will certainly have to be changed. The battery is well buried under several connection cables and as always very well glued to the chassis.

For Samsung, the Galaxy S21 is easy to repair

But let’s take a look at the repairability index recently implemented in France and mandatory for new smartphones. This rating is assigned by the manufacturers themselves based on a scale set up by the government depending on the number of tools required, the availability of parts or the number of steps to access certain elements.

Based on these tables, Samsung therefore assigned the Galaxy S21 a repairability index of 8.2 / 10, a difference of 4.2 points compared to the rating assigned by iFixit.

For comparison, Fairphone prides itself on getting a repairability rating of 8.7 / 10 on its Fairphone 3+, while this one comes with a screwdriver, designed for easy-to-implement repairs and has obtained the score of 10/10 on iFixit.

This notable difference highlights one of the main problems with the reparability index implemented by the government. This above all notes the possibility of having his smartphone repaired by a distributor or a producer, as well as the availability of parts, but access to these elements by the consumer only represents a small part of the rating. Moreover, the difficulty of repair is not taken into account either.

Understand by this that a device obtaining a good repairability index will not necessarily be easy to repair on your own, forcing you to turn to official distribution channels, generally charging a high price for the slightest change of screen or battery (count 259 to 289 euros to repair the screen of a Galaxy S20, S21 + or S20 Ultra, even if it is only the glass that is broken).

We can therefore deduce that it is indeed possible to repair the Galaxy S21, but will this really extend its durability and life cycle, thus reducing customer turnover? Nothing is less sure.