Very high speed fiber optic connections are becoming more democratic, but box Wi-Fi connections are rarely up to the task and often restrict speeds. Faced with this paradox, there are fortunately high-performance Wi-Fi 6 and Wi-Fi mesh systems. 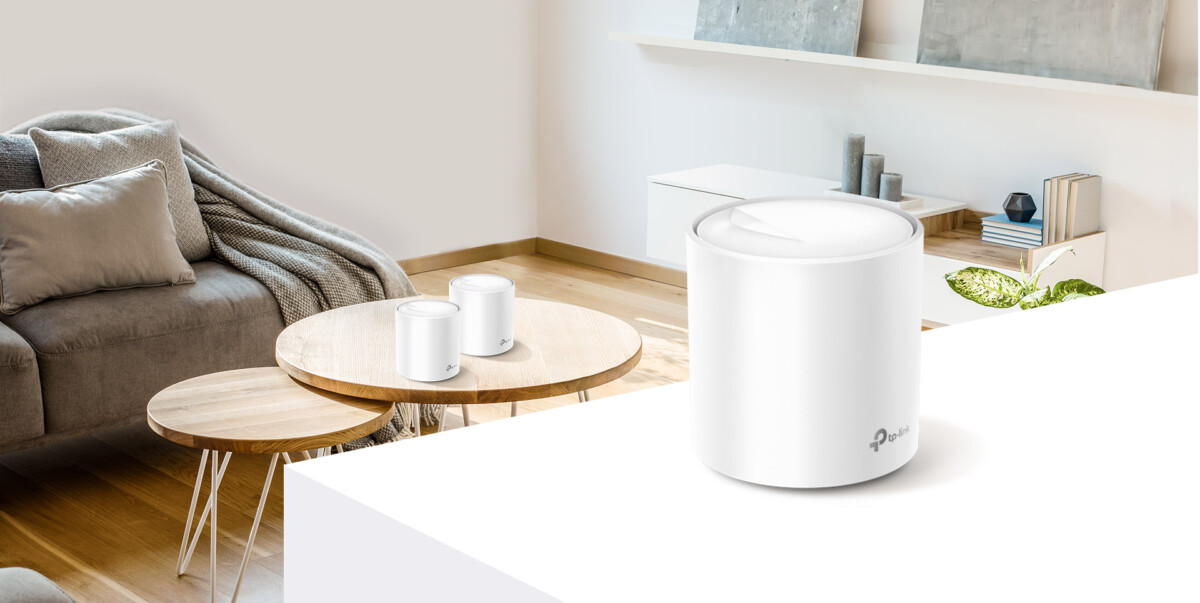 While fiber is more and more widely available in France, the Wi-Fi of most operator boxes is still poor. Some people pay dearly for subscriptions giving the right to 1 Gb / s or more, but they do not see the color: Wi-Fi speeds are insufficient and entire areas of their homes are simply not covered.

Fortunately, the latest Wi-Fi technologies perfectly meet the requirements of the most connected homes. In particular Wi-Fi 6, a new Wi-Fi standard that brings much more than an increase in speeds, as well as the so-called mesh, the best solution to coverage problems. The system Deco X60 from TP-Link combines these two innovations to deliver fast, uninterrupted Wi-Fi in all rooms of the home, even when multiple devices are in use simultaneously.

Let’s start with the so-called Wi-Fi technology mesh, which is not specific to Wi-Fi 6. The term primarily designates the possibility of connecting several access points together, with or without wires, so that they form a single uniform Wi-Fi network, a mesh. By extension, most Wi-Fi systems mesh employ standards (IEEE 802.11k and 802.11 v) that allow devices to automatically connect to the nearest access point. 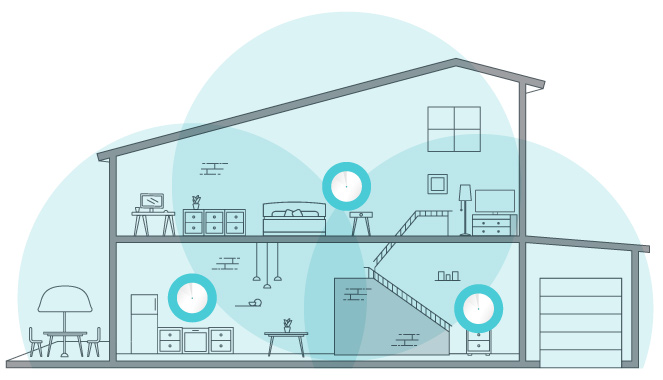 By placing multiple access points in one home, Wi-Fi Mesh provides much better coverage than a single router.

The most advanced systems, such as the TP-Link Deco X60, additionally employ the 802.11r standard, also called smart roaming, which allows devices to switch access points seamlessly. Concretely, this makes it possible, for example, to move around at home during an internet call, or even to watch a Netflix series in 4K on your tablet without interruption when you change rooms.

This is what distinguishes mesh networks from simple repeaters. With repeaters, connected devices are likely to remain connected to a remote access point. But with the downside of causing (brief) cuts when changing access point.

Improvements in coding and modulation techniques for Wi-Fi signals can significantly improve speeds and response times. With an 80 MHz channel on the 5 GHz band, the maximum speed per device with the Deco X60 goes from 867 Mb / s in Wi-Fi 5 to 1201 Mb / s in Wi-Fi 6. Either a jump of almost 40%! 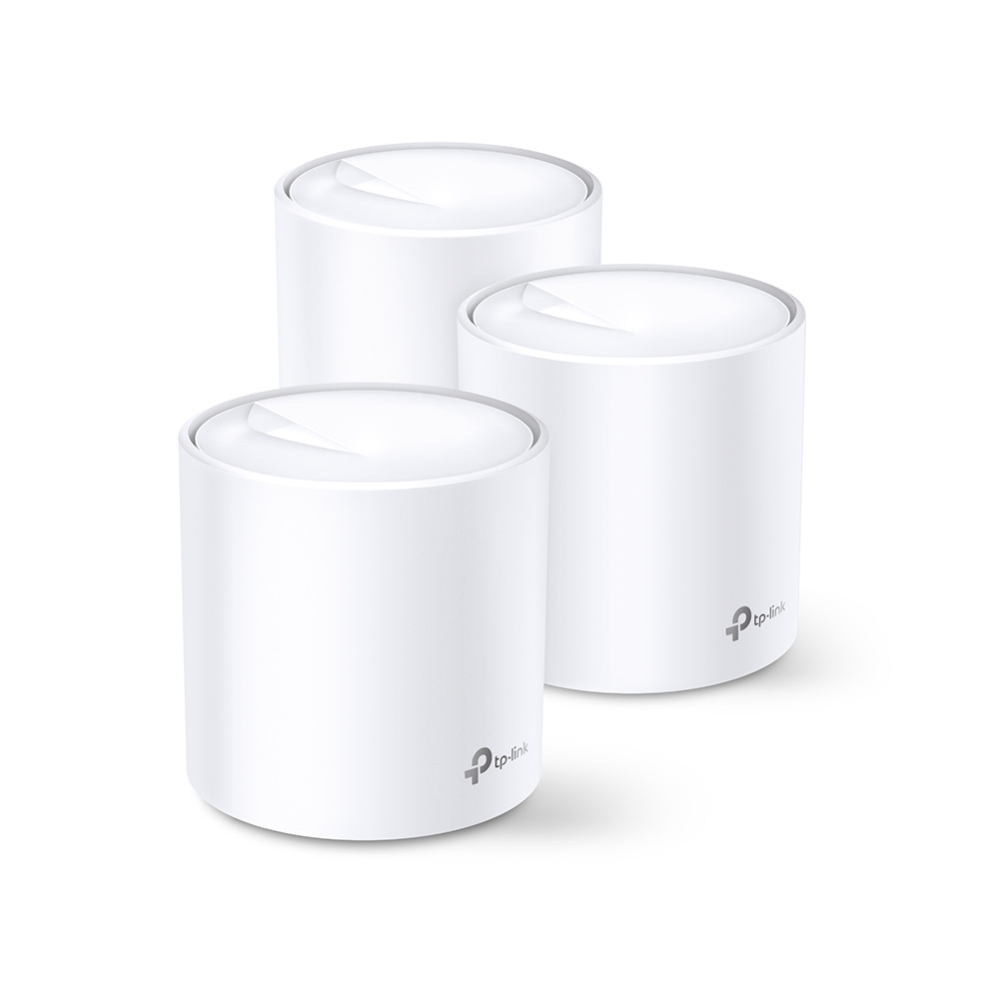 The cylindrical design of the Deco X60 cleverly hides the 6 antennas of the router: 2 2.4 GHz antennas and 4 5 GHz antennas.

The adoption of OFDMA, borrowed from 4G, reduces the saturation of the waves. OFDMA is a multiplexing technique that allows several devices using the same channel to communicate in parallel. With previous generations of Wi-Fi, they communicated in turn until then. So much so that performance plummeted when multiple devices communicated simultaneously.

The principle of OFDMA can be explained with this diagram using trucks. In the case of WiFi 5 (left), each delivery truck or “package” can only deliver one package to one device at a time. In the case of WiFi 6 (right), each truck can deliver several packages simultaneously, and to several devices.

In addition, Wi-Fi 6 now uses MU-MIMO technology (multi-user multiple-input multiple-output) also in uplink, and no longer just in downlink. This technology makes it possible to distribute the multiple antennas of an access point between several devices.

Finally, Wi-Fi 6 increases the signal range. It improves for this the beamforming, a technique which consists in directing and concentrating the waves towards each device, instead of emitting in all directions. The Deco X60 system additionally uses an optional technology called BSS Color, which “colors” signals so that devices can distinguish signals on their own Wi-Fi network from those of other surrounding networks, improving the reliability of Wi-Fi connections. Fi.

Concretely, the Deco X60 perfectly meets the needs of today and tomorrow. Parents and kids can video conference, stream 4K or even 8K simultaneously, and play online from all corners of the house without disruption. Especially since the new generation of console, more precisely the PlayStation 5, is compatible with the Wi-Fi 6 standard and the solutions offered by TP-Link. This means that gamers can enjoy lightning-fast downloading of their games, and thus enjoy the best gaming experience. The system is even more future-proof as it supports WPA3, the new encryption standard, in order to secure its network in the long term. 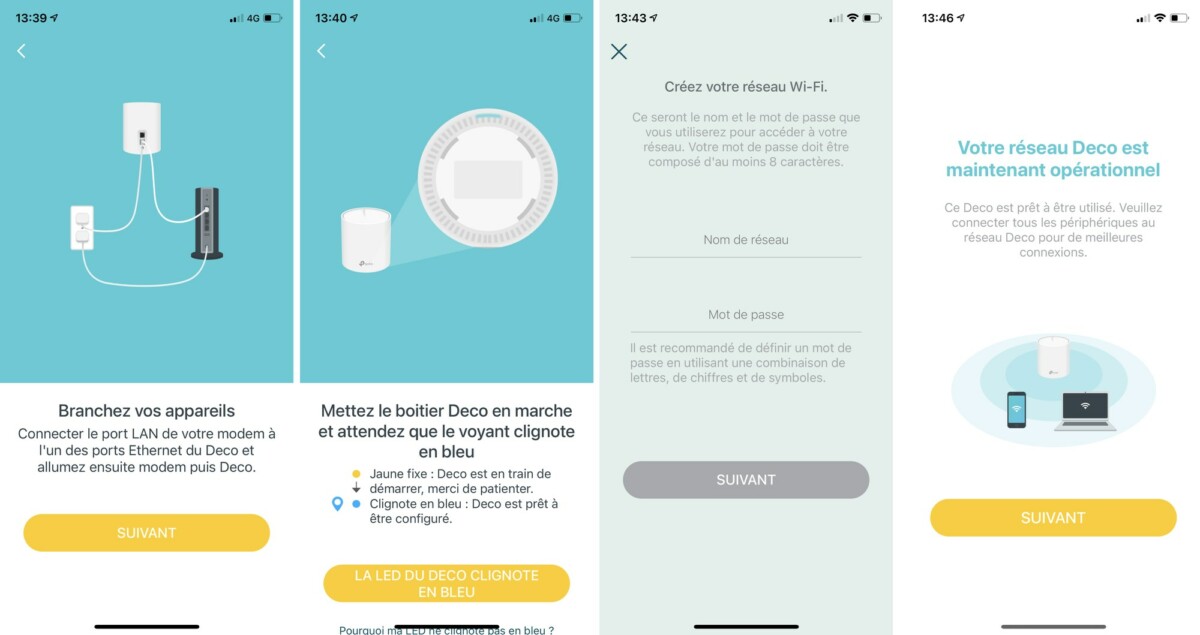 The installation of the Deco X60 and X90 is done through a mobile application. It only takes a few minutes for the solution to be functional.

One might fear that such sophisticated products are reserved for experienced users, but TP-Link completely ignores all the technique. The installation procedure is indeed childish thanks to the Deco mobile application which guides the user step by step. All you have to do is follow the instructions on your smartphone and choose a name and password for your new Wi-Fi network. The installation is operational in a few minutes.

The application then allows you to manage your network, and in particular to activate the HomeCare functions. The Deco X60 system integrates free of charge an antivirus, which blocks malicious websites, a parental control function, which makes it possible to block certain categories of online services and limit connection time, as well as a QoS (Quality of Service) function. ), which allows you to prioritize certain devices or an activity such as video. 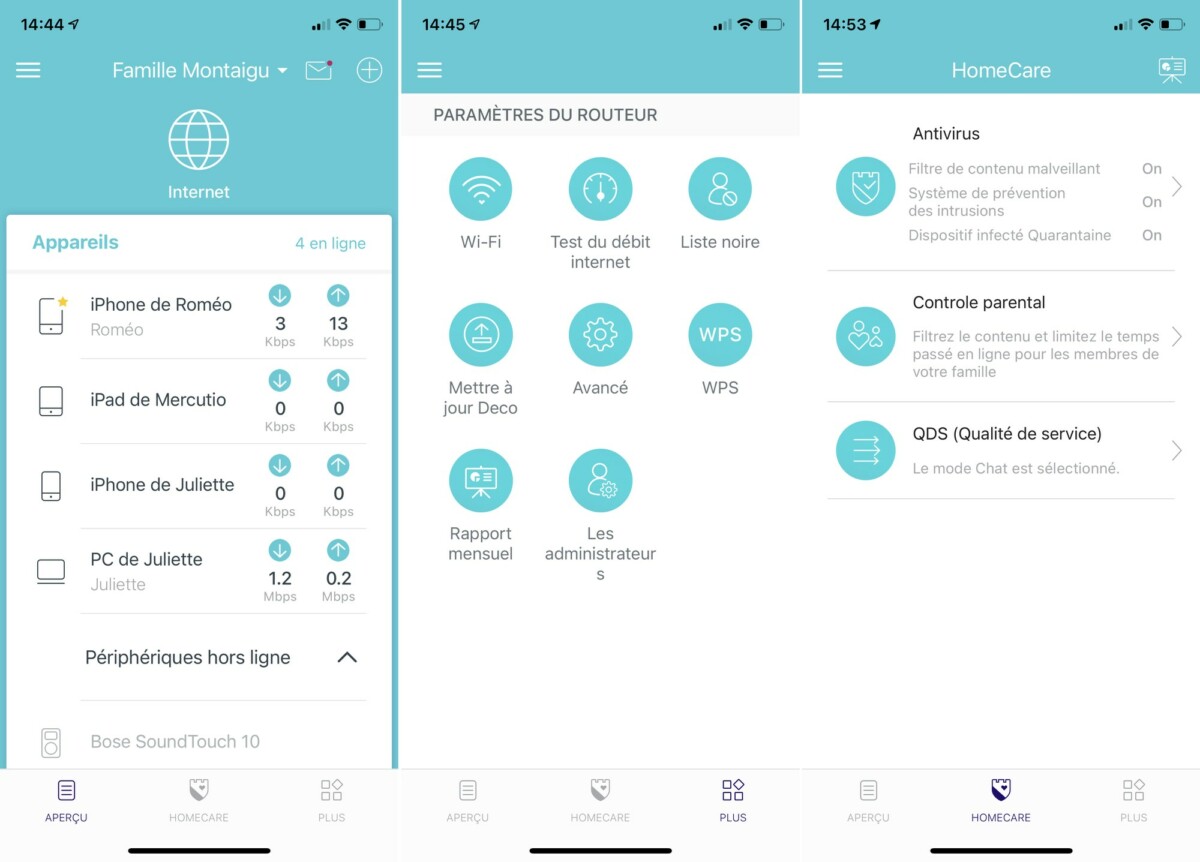 Who says setting up a router is hard? The Deco X60 interface can be controlled directly on your smartphone, in clear menus. 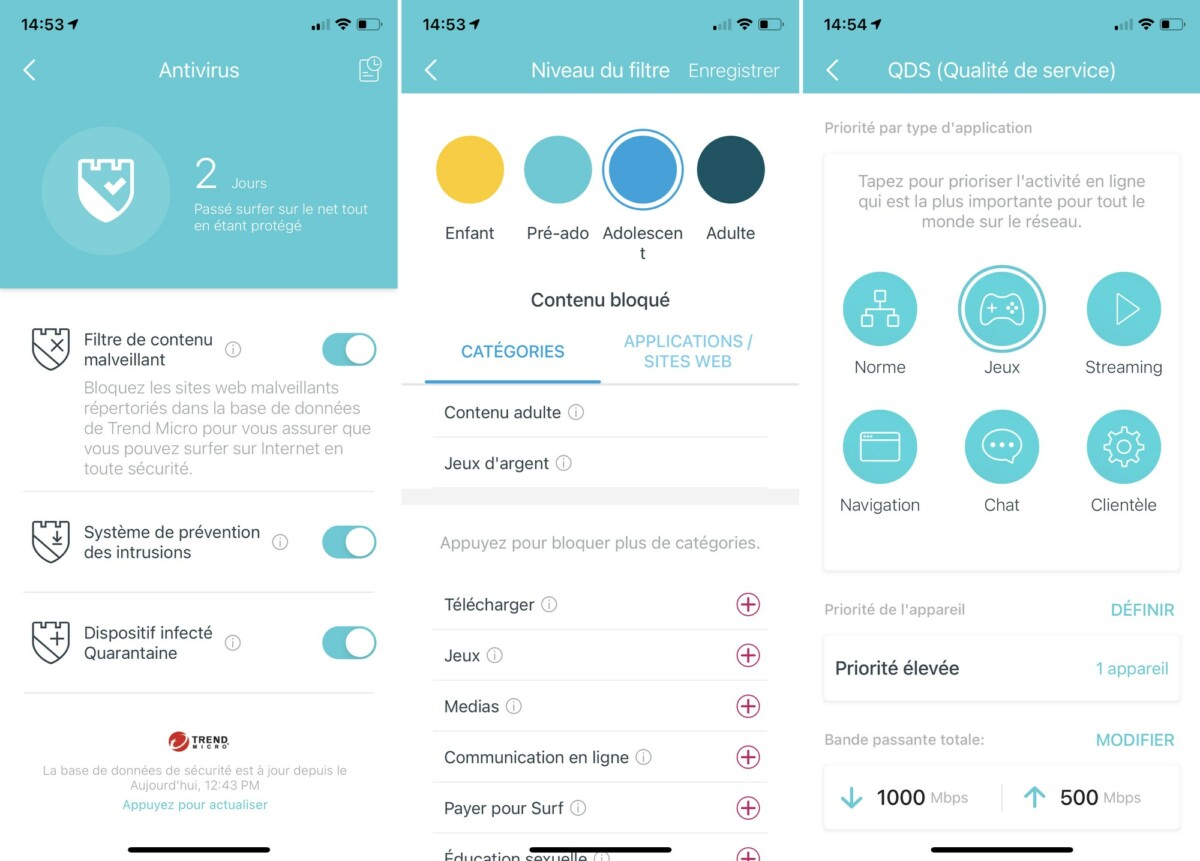 The control options are numerous. 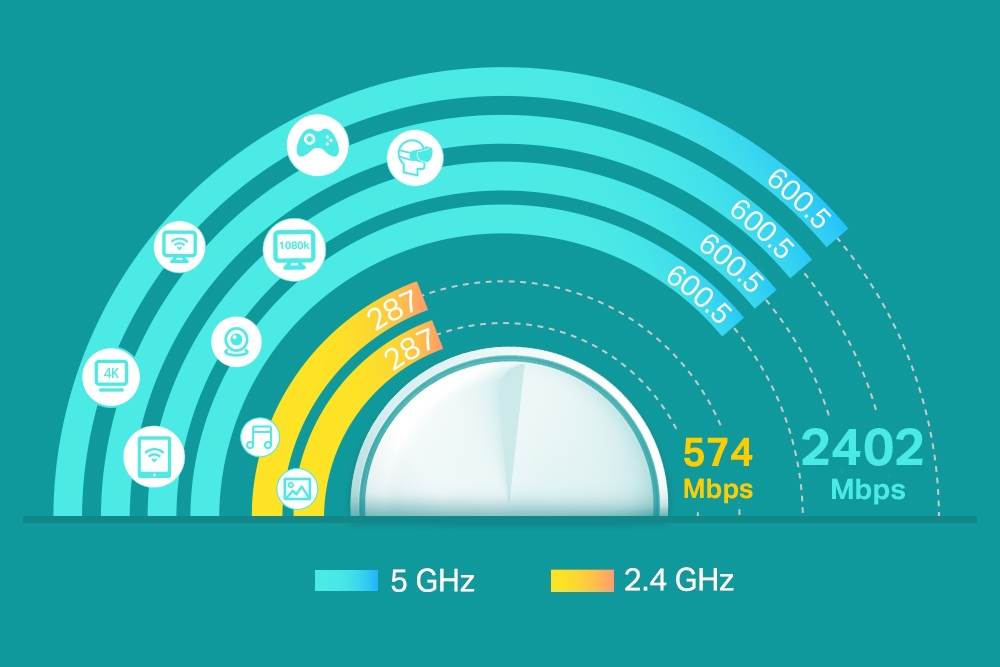 The Deco X60 from TP-Link offers wide wireless coverage thanks to its very high speed new generation WiFi 6 (up to 3 Gigabits / sec.)