The PlayStation Plus subscription has started a strategic shift that may have gone unnoticed. However, it is crucial for the brand against the Xbox Game Pass.

Microsoft clearly did not emerge victorious from the previous generation of consoles. While the PlayStation 4 and Nintendo Switch have or are expected to far exceed 100 million copies sold, the Xbox One appears to have stagnated around 60 million copies. This also represents a significant drop vis-à-vis the Xbox 360, sold 84 million copies. However, for two years, the video game industry has had only one brand in its mouth: Xbox Game Pass.

Since the start of 2018, not a month has gone by without asking questions about the future of Xbox Game Pass, its profitability, its potential, the new games that include Microsoft’s subscription, or its arrival on new platforms, in particular thanks to xCloud. It is also this subscription which was the engine of the acquisitions of studios by Microsoft, until the giant of the sector, Zenimax Bethesda.

So inevitably, many analysts are wondering about Sony’s strategy: should we imagine a PlayStation Game Pass? How could the brand react if the Xbox Game Pass were to become an unmissable success. How can the firm adjust its strategy, for the moment oriented towards the mass sale of blockbusters? For several months, Sony has been quietly giving us the start of an answer.

First we have to get back to Sony’s perspective. The Japanese manufacturer emerges completely victorious from the previous generation of console. On the one hand, the PlayStation 4 was an incredible success, defying all the predictions of analysts, many feared in 2013 that the mobile game market would swallow up that of the console. On the other hand, with the PS4, Sony has enormously strengthened its portfolio of cult games. In addition to the unbeatable Uncharted, we can count on Ratchet & Clank, Horizon, God of War, The Last of Us or even Days Gone. So many titles that ignite both critics and sales when they come out.

Sony has an incredible catalog of exclusives

When we manage to sell games at 70 or 80 euros per unit, as soon as they are released, in millions of copies, we obviously have no interest in “offering” them in a monthly subscription. If Microsoft started this strategy, it is precisely because the Redmond firm did not have such strong exclusives, and could not compete with Sony on the same strategy. Today, Xbox has found, through Game Pass, its identity distinguishing it from PlayStation and Nintendo.

To take an analogy with the world of cinema, health situation aside, it is hard to imagine Disney wanting to offer the next Avengers from day one on Disney +, and to do without any ticket or Blu-ray sales, unlike Netflix which relies above all on its subscription service.

However, with the Xbox Game Pass, Microsoft manages to convince more and more publishers and independent developers to embark on the adventure. These are not titles developed by Microsoft, or even exclusives, but they are available when they are released on Xbox, in Game Pass. This is the case for example of SpiritFarer, released the same day on several platforms, including Nintendo Switch or Xbox, but from day one in Microsoft’s subscription. Against this breakthrough, Sony seems to have developed a new strategy.

Sony is not completely absent from video game subscription services. Since 2006, the brand has offered its PS + service in particular, which currently allows online play on PlayStation consoles, but also and above all to receive a few titles each month “for free” as long as one remains a subscriber. This service is a real success for Sony, and the revenues generated allow the brand in particular to travel towards a record year, when the console launch years are usually in the red, due to the investments required.

For several months, the brand began to discreetly develop its service. First with the launch of the PS5, it now includes a “PlayStation Plus Collection” catalog which allows subscribers to acquire twenty of the best PS4 games, completely free of charge. But the most interesting, and undoubtedly the monthly selection of PS + games. We are talking about the few games offered each month if you are subscribed. If previously Sony offered old titles, sometimes cult, the brand began to offer recent titles more regularly, see titles on the day of their launch.

Thus in November, Sony offered the independent game Bugsnax, from the day of its release. Then he had the rather special case of Control Ultimate Edition. While the game Control was released in 2019, and the Ultimate Edition version was released in 2020, but its arrival in the PS + in February 2021 coincides day to day with the launch of the next-gen versions of the game, for PS5 and Xbox Series. It is all the more important to mention that the Xbox Game Pass has been content since December 2020 with the simple version of the game, for Xbox One consoles. 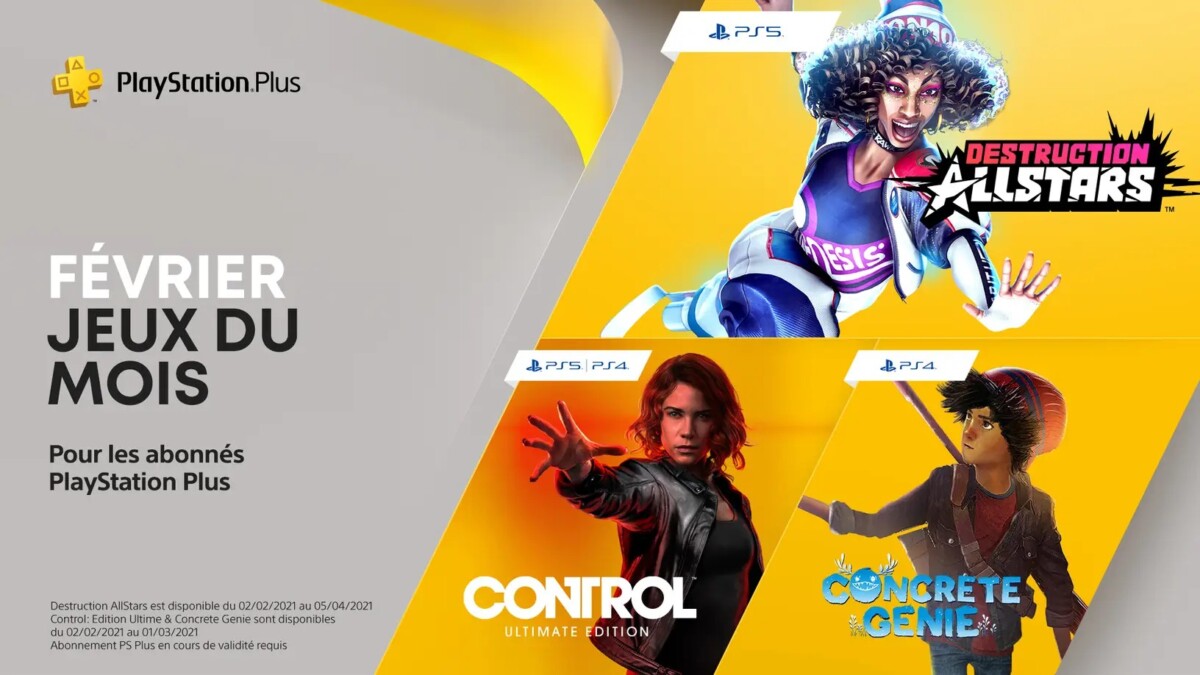 PlayStation confirms: day one games launch in PS + will continue

On the sidelines of his announcements on PlayStation VR and PS5 stocks, PlayStation boss Jim Ryan responded to questions from GQ magazine, and it returned to the PlayStation Plus. In this interview, the magazine directly asks the question of game releases in the PS + from their “day one” launch date. Jim Ryan explains that Sony intends to continue this strategy, and sign with publishers to offer their games from the start in its subscription.

This strategy doesn’t suddenly turn PlayStation Plus into head-on competition with Xbox Game Pass, but it partially disarms one of the arguments: the release of a game in the subscription. This feeling among players that they will be able to play this game for free on Xbox when it is released, rather than (pay for it) on another platform.

From all this begins to emerge a very relevant strategy for PlayStation. The great PlayStation Studio exclusives will continue to come out at a premium price, and are very likely to sell well thanks to their high quality. But Sony will allow itself to invest more in the PlayStation Plus with strong months, which will push players to stay in its ecosystem, and especially to keep their subscription. Do not forget that the PS + costs only 60 euros per year, against 120 euros for the Xbox Game Pass.

This allows Sony not to betray its vision, while competing with Microsoft’s subscription service in a different, but relevant way. It will be very interesting to watch what Sony will offer in the coming months on its service, to find out how much the firm has opened its budget on this point. The past few months are already encouraging.