This 2021 edition of the Consumer Electronic Show is full of announcements for the Chinese manufacturer HiSense. In addition to its news on the TV side, this 88L5VG video projector already deserves all the attention of cinema fans. 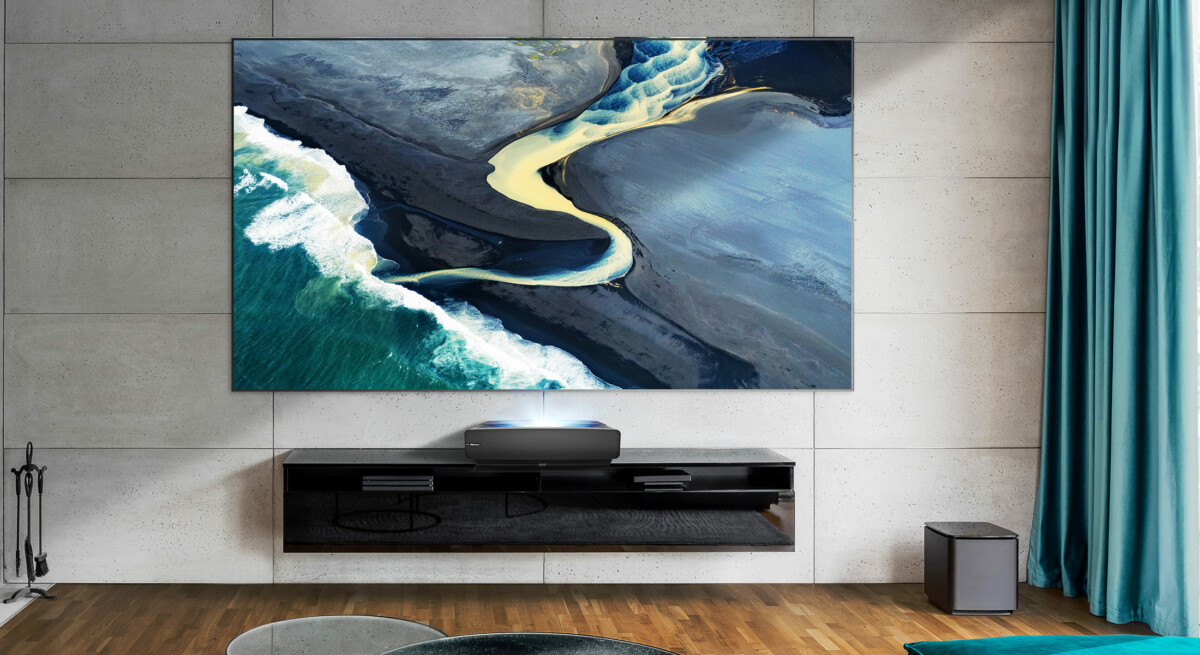 Last October, we gave you our first impressions of the HiSense 100L5F, an ultra short throw UHD laser projector, delivered with a 100-inch technical screen. From next March, the manufacturer will complete its offer with an even more surprising model: the 88L5VG.

In fact, the novelty is rather on the side of the projection screen which promises a cinematographic experience, to our knowledge, unprecedented in the market of consumer products. Finally, “general public” … let’s put our feet in the dish, this offer including Laser TV and its screen is offered at 4990 euros.

If by chance the exact reference of the product seems too difficult to remember, you can simply call it the « HiSense Sonic Screen ». A name that refers to its 88-inch (224 cm diagonal) projection screen, which incorporates a very promising audio broadcasting system. 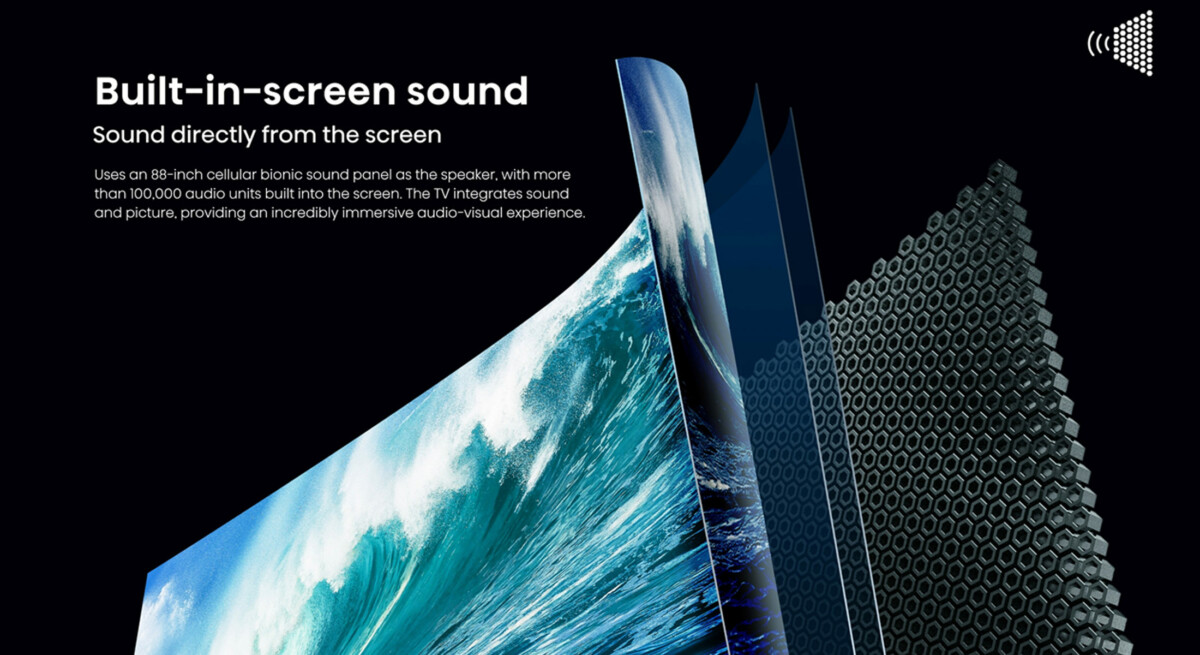 The audio screen is made up of 100,000 audio units called bionic cells

Behind the projection surface, therefore integrated into the frame, HiSense would have placed 100,000 units called “bionic cells” which transform the screen into an audio diffuser. A bit like the speakers placed behind the screens of movie theaters, this large 88-inch diagonal panel takes care of the sound part, with a reproduction that promises to be very exciting.

HiSense remains fairly discreet for the time being on the functioning of these cells, but the fact that it refers to DML (Distributed Mode Loudspeaker) technology already gives us some information about its mode of operation – even if it is must remain cautious. In general terms, we must consider that this large surface is made up of 100,000 audio units which vibrate almost microscopically to produce the different audio frequencies. 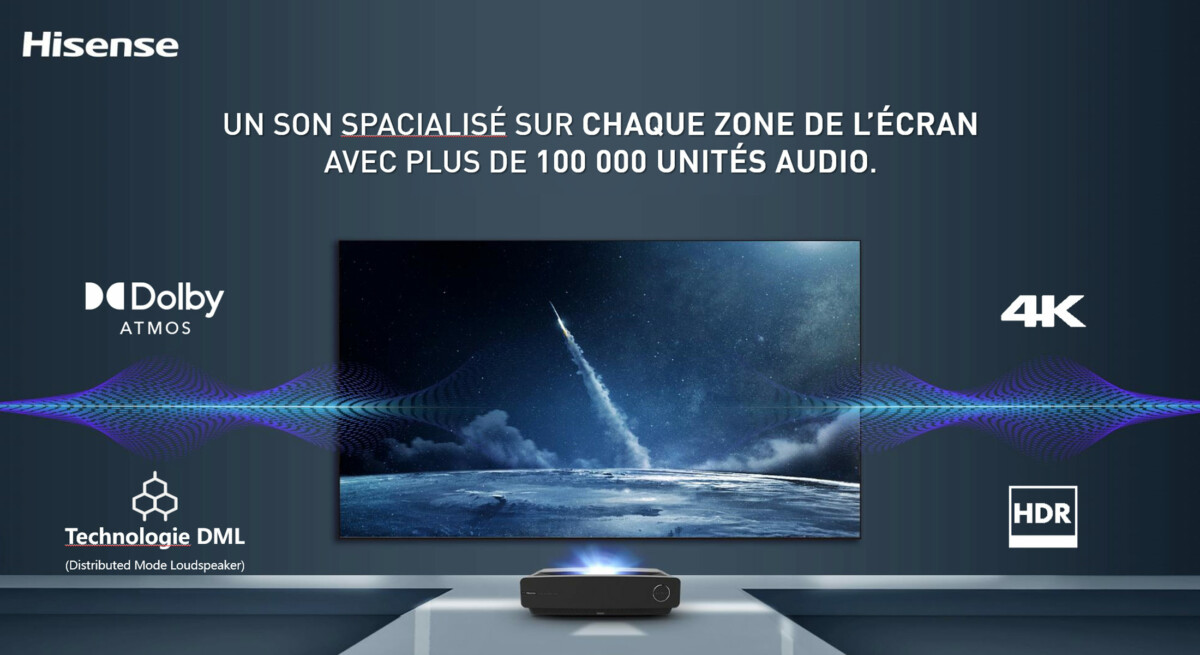 Another special feature of this DML technology is that the units allow for a fuller sound to be produced, as opposed to conventional audio speakers which are more directional due to their conical shape. Again, we’re taking a grain of salt, as it’s going to depend on how HiSense operates the thing. In any case, on paper it is promising.

Side power, HiSense indicates that the system delivers 90 dB, which is probably not very evocative for the common man. And to say that movie theaters are above 110 dB won’t give you a much more precise idea, because the decibel curve is logarithmic and not linear. 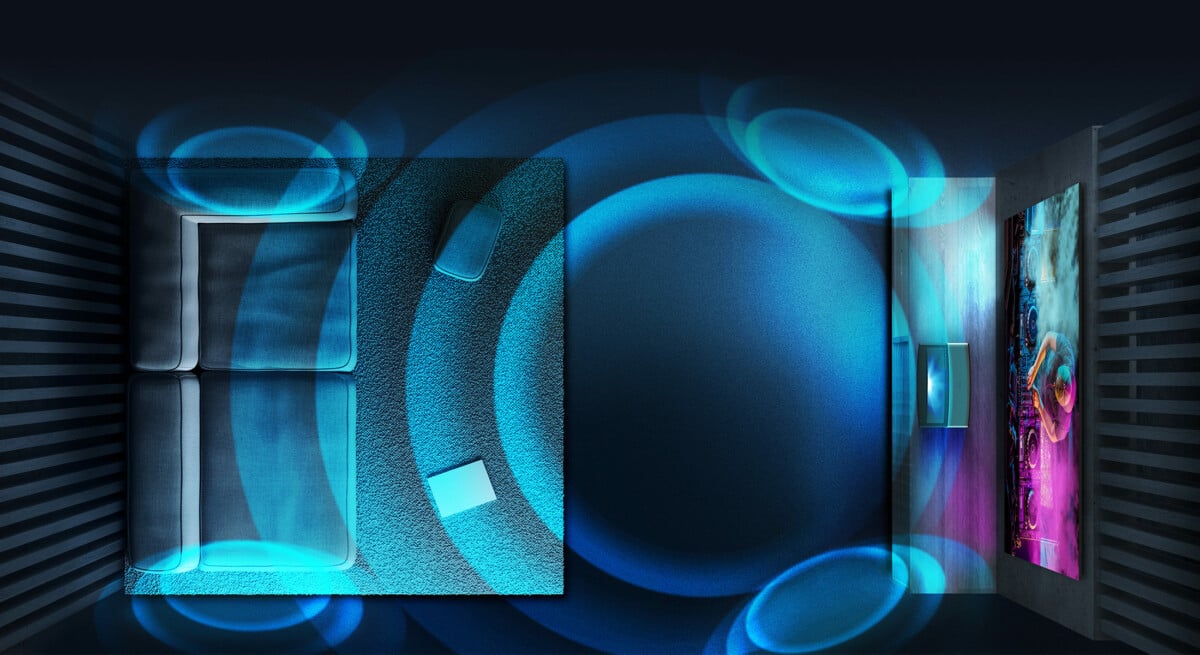 The surround effect of technology

Either way, this technology allows HiSense to claim 360-degree spatial sound, as well as Dolby Atmos rendering. We did not indicate it earlier, but it will naturally be necessary to connect the screen to the video projector to recover the audio signal – we are waiting for the manufacturer to tell us how the two are connected together. HiSense does not give more details on the audio formats accepted by its product. Only an indication as to the minimum frequency of 50 Hz allows us to hope that its 88-inch “Sonic Screen” will be able to restore bass.

On the side of the video projector itself, the technical characteristics are more traditional. It is finally quite close to the one delivered in the HiSense 100L5F offer. Thus, the model provided is equipped with a DLP Full HD chip capable of producing an Ultra HD image thanks to the principle of wobulation. 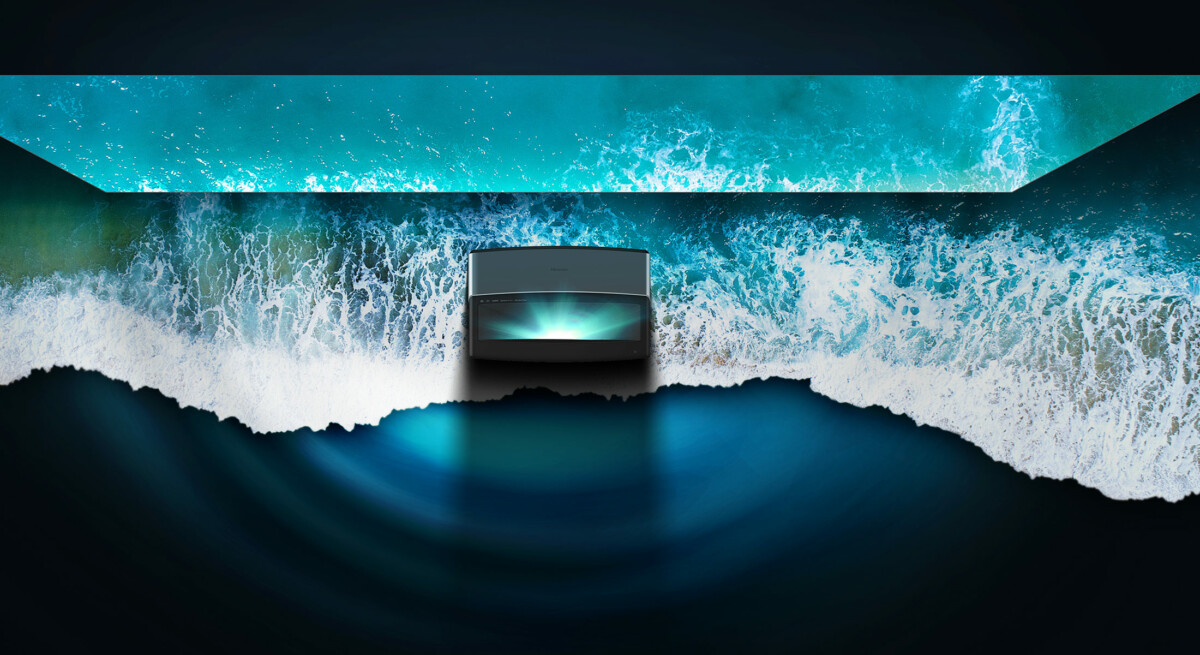 The light source, therefore a blue laser, then passes through a color wheel to produce the image. The manufacturer promises a very respectable brightness of 2150 ANSI Lumens and a lifespan of more than 20,000 hours. The device runs on the VIDAA operating system in version 5.0, including a few new applications, including Molotov. Disney + and MyCanal are still not part of the party, but HiSense is working on it.

The connection consists of 4 HDMI (2.0 b), two USB, an optical audio output, a VGA socket, Wi-Fi and Bluetooth without forgetting the TNT tuner.

The announcements made by HiSense within the framework of its global conference also mentioned a triple laser video projector, with its motorized projection screen that fits in a cabinet. This product will not be available in France, at least not before 2022. On the other hand, we should see the TriChroma Laser TV 100 ″, aka the 100L9, land in the second half of the year. 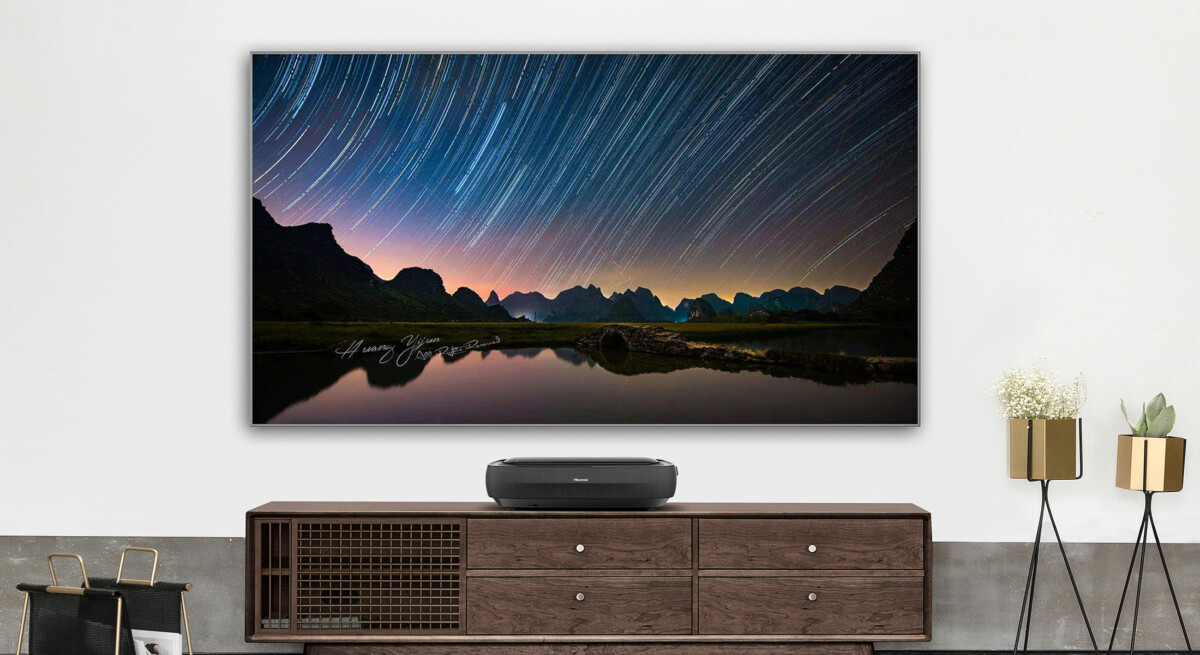 The 100L9 is, as its name suggests, delivered with a fixed 100-inch screen, but this time without an audio system integrated into the canvas. The audio will be taken by the video projector, the particularity of which is to directly integrate the three lasers of red, green and blue colors. No more need for a color wheel mechanism to recreate the colors on this DLP solution with 4K wobulation. This should allow even better contrasted images to be obtained, but also brighter.

HiSense advertises 2800 ANSI Lumens. For the rest, this 100L9 has technical characteristics similar to those of the 88L5VG, the sound bar in addition. Finally, HiSense announces a price of 7000 euros for its 100-inch TriChroma Laser TV, or a price very close to the Samsung The Premiere LSP 9, but which is delivered without a projection screen. And that, when we know that a good technical canvas suitable for these ultra short throw products can quickly cost more than 1000 euros, we say to ourselves that HiSense has a card to play.