Imagine yourself with a 4K, cinema format 100 inches diagonal (2.54 meters) screen facing your sofa. All without (almost) changing your interior. The solution to achieve this cinephile’s dream exists, it is the Hisense Laser TV 100L5F video projector. A dream finally accessible, because for the end of the year, Hisense drastically drops its price by 1,500 euros! 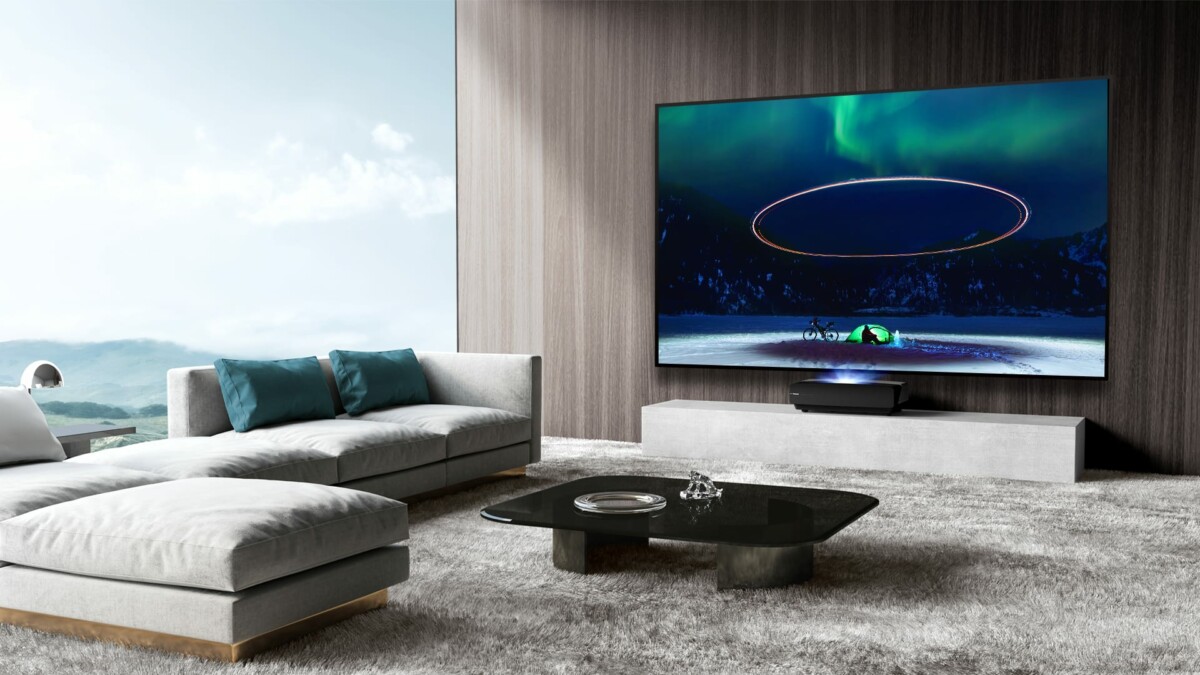 Want to watch a movie or a series? Forget your tablet or smartphone! If they are practical, they offer a more limited immersion than in front of a television and do not allow to appreciate all the beauty, the subtlety, of a quality 4K image. Whether for a series like Mindhunter or a movie like Schindler’s List, to feel a maximum of emotion and really enjoy the experience, nothing beats a big screen.

If the standard sizes of 55 or 65 inches still seem too tight for your immersion appetite, have you thought about the video projector? This is an area that Hisense masters particularly well, as proved by impressive sound Laser TV 100L5F. It is a short throw projector that has all the qualities of an XXL home cinema, without having to do any work at home and at an affordable price. Indeed, it has a basic excellent quality-price ratio of 4,490 euros. But as Christmas approaches, the Hisense Laser TV 100L5F sees its price drop from 1,500 euros to 2,990 euros, thanks to an immediate reduction coupled with a deferred repayment offer.

The Hisense Laser TV 100L5F is presented as a compact video projector, with measurements of 54.66 x 34.5 x 15.8 cm for 11 kg. A size that is in the good average of 4K video projectors. Where it sets itself apart is by combining the best of television and video projection. Thus, the Laser TV 100L5F uses ultra-short throw laser technology. Concretely, this means that it only needs about thirty centimeters of distance from the projection wall to display an image 100 inches diagonally. You will really feel like you have a giant television set in your wall. 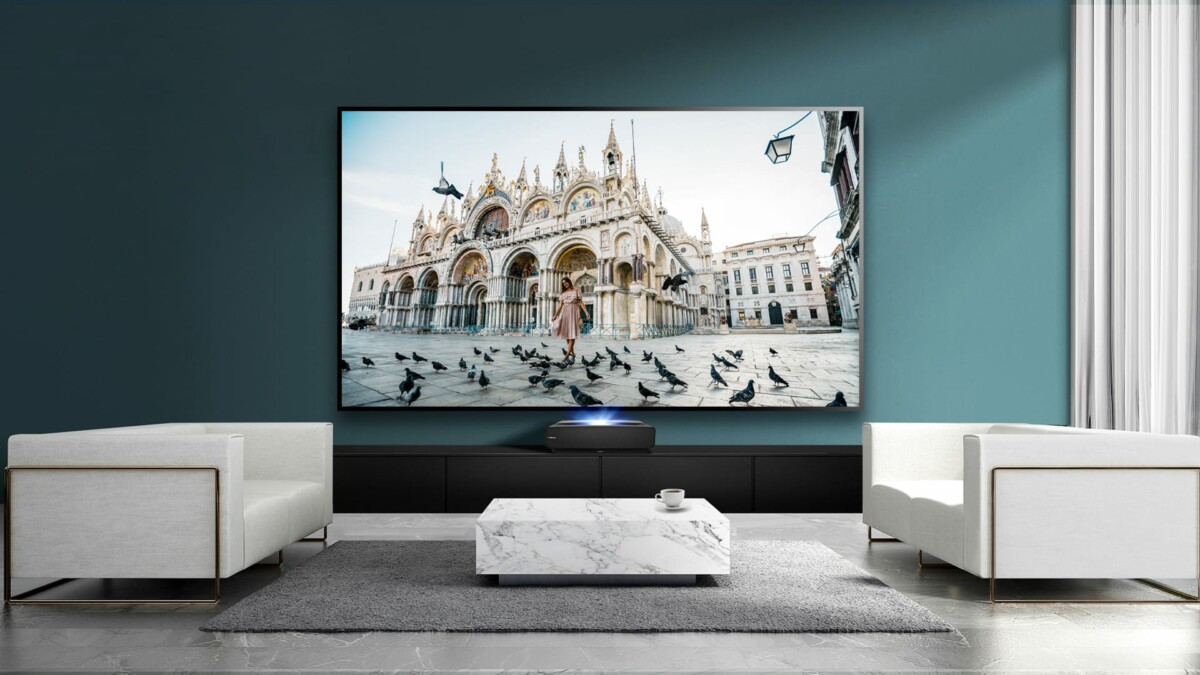 The Hisense Laser TV 100L5F displays a diagonal of 100 inches.

To ensure the best image rendering, Hisense combines its video projector with a 100-inch screen (2.54 m diagonal) which hangs directly on the wall. It is designed to reduce the reflection effects of daylight and maximize that of the Laser TV. The result is a very large 100-inch image that’s bright, colorful even in the middle of the day. At least as long as the sun does not strike directly on the canvas, physics retaining certain unalterable laws. 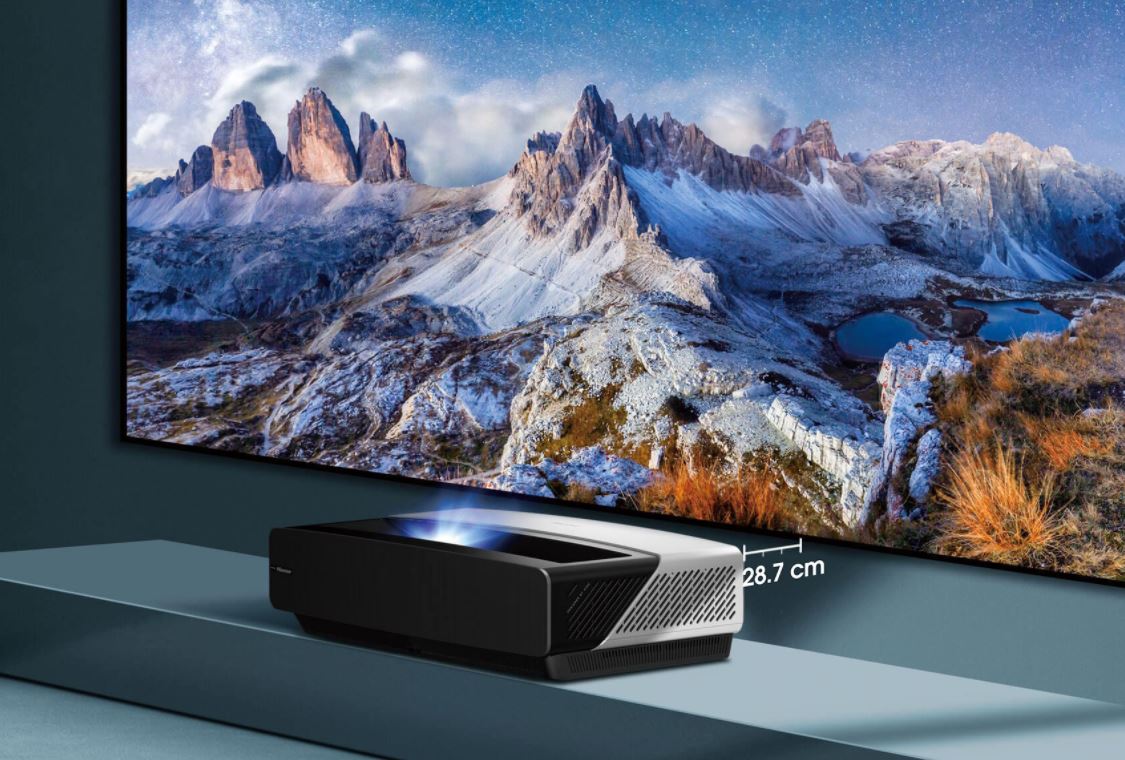 Just 30 centimeters of space from the wall is enough to cover the 100 inches of screen display area supplied with the Hisense Laser TV 100L5F.

This combination allows the Laser TV to be installed in a few minutes. You just need to have a large enough wall facing your sofa, hang the screen on it and place the projector on a TV cabinet less than 30 cm from the wall. You will then be the proud owner of a 100-inch TV, borderless and ultimately occupying very little space. For comparison, OLED screens display a maximum diagonal of 85 inches, rarely more. But they are much more bulky and their price blithely exceeds 20,000 euros, compared to the 3,490 euros of the Hisense Laser TV 100L5F.

A concentrate of technology for lovers of image and sound

The Hisense Laser TV 100L5F is designed around the latest generation of DLP Theater laser technology from Texas Instrument. It is associated with an X-Fusion blue laser which offers a brighter and more natural image. With the bonus, a laser which ensures a lifespan of 25,000 hours (ie nearly 7 years at a rate of 10 hours / day) against 2,000 hours (83 days) for products fitted with conventional bulbs. A device that requires little maintenance, therefore.

On the color side, the Laser TV 100L5F has True Cinema Color technology which ensures a full color spectrum and which is supported by the presence of HDR. The latter will, among other things, maximize contrasts, optimize brightness and improve the depth of blacks to display an image ever richer in detail. 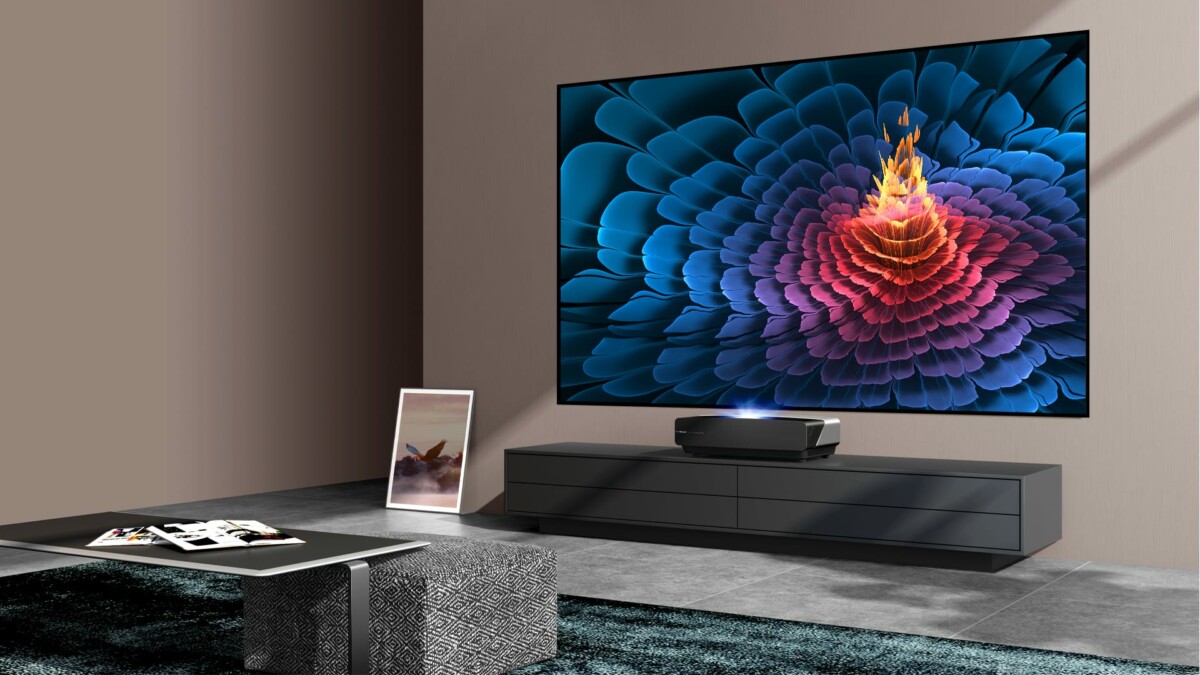 Animation is not left out and thanks to MEMC, a dedicated technology which gives the Laser TV a response time of the order of a microsecond. A technology that favors “fast” content such as watching action films or broadcasting sporting events. The icing on the cake is Dolby Atmos, which ensures a perfect match between an optimized image and a spatialized audio rendering. So the sound is not just stereo, it doesn’t just move horizontally like with a 5.1 system. With the integration of Dolby Atmos, the Hisense Laser TV 100L5F allows the viewer to hear the sound moving up or down. The sound immersion is then total and perfectly complements the impact of the image.

The Hisense Laser TV 100L5F is not just a simple “passive” projector that just displays content from a user’s PC or NAS. When you turn it on, the VIDAA welcome screen is displayed. This is the name of the Laser TV 100L5F SmartTV experience. A clear and easy-to-access interface that also benefits from the most used applications. There are the essentials such as Netflix, YouTube, Molotov TV, Prime Video, RMC Sport or even YouTube. What to take full eyes and also full ears, because the Laser TV embeds 30 Watts of multichannel power. 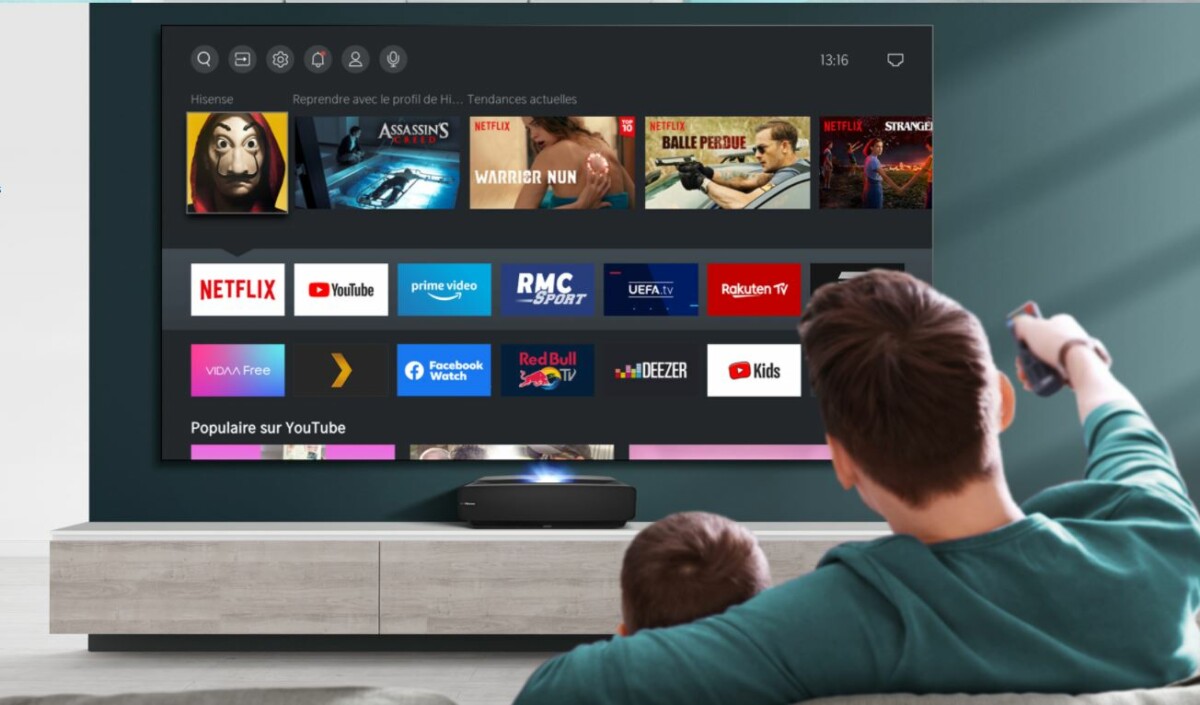 The Laser TV 100L5F has a connected interface, VIDAA, in which the main entertainment applications are found: Netflix, YouTube, Prime Video or even RMC Sport.

Are you a well-equipped person? No worries, Hisense sees a wide range of connectivity. We thus find at the back of the Laser TV 100L5F: 4 HDMI 2.0 ports, a stereo audio input and output, an optical digital, a VGA port, two antenna sockets and an ARJ 45 port. a digital and satellite tuner to enjoy television even more easily. Finally, there are Bluetooth and Wi-Fi connectivity to stream content from your local network or the Internet or directly from your smartphone or tablet.

Very large screens remain a fantasy for the majority of users. The products are at astronomical prices and the footprint is excessive. On these two points, the Hisense Laser TV 100L5F excels.

When it was launched, the Laser TV 100L5F was already positioned as a product with a very attractive quality-price-size ratio. With the price reduction of 1,000 euros and the additional ODR of 500 euros, the Hisense Laser TV 100L5F has now fallen below the 3000 euros mark! What was a somewhat exceptional coup de coeur, is now becoming much more reasoned. Just be careful that your neighbors don’t invite each other too often …