Did you know that it is possible to take advantage of the possibilities offered by a VPN directly on your Android TV? We explain to you what it is for, and especially how to do it.

VPNs aren’t just apps that protect the data that travels across your various devices. They are also used to circumvent geographic restrictions and at the same time offer access to content normally not available in France. In other words, and with just one click, you can unblock foreign catalogs from SVOD platforms – the American Netflix catalog to name but one.

If this use is more and more known on smartphones or computers, few know that it is also possible to enjoy it on his TV. Why limit yourself to the small screen of your phone when you can enjoy the best foreign series and films on the big screen that sits in your living room, especially in this period of confinement? We explain the procedure to you, and you will see, it is not very complicated.

For this little tutorial, we used Surfshark VPN, one of the best value for money at the moment, whose two-year subscription is only 2.15 euros per month.

How to enjoy your VPN on Android TV?

First and foremost, make sure you have a Android TV compatible TV or an Android TV box. For example, you will find many compatible televisions from Sony, Philips and Toshiba, as well as the Nvidia Shield, Bbox Ultym and other SFR Connect TV boxes. Another example is Google’s very recent Chromecast. Their common point: they all allow you to download applications through the Google Play Store.

You’ve probably done the hard part, since the rest is a simple application installation. So, just like you would on your phone, go to the Play Store on your Android TV and download the Surfshark app. Then just open the application, then log in with your credentials to access the VPN service. It is therefore necessary to be subscribed to a VPN service, like that of Surfshark, to be able to fully benefit from the application. 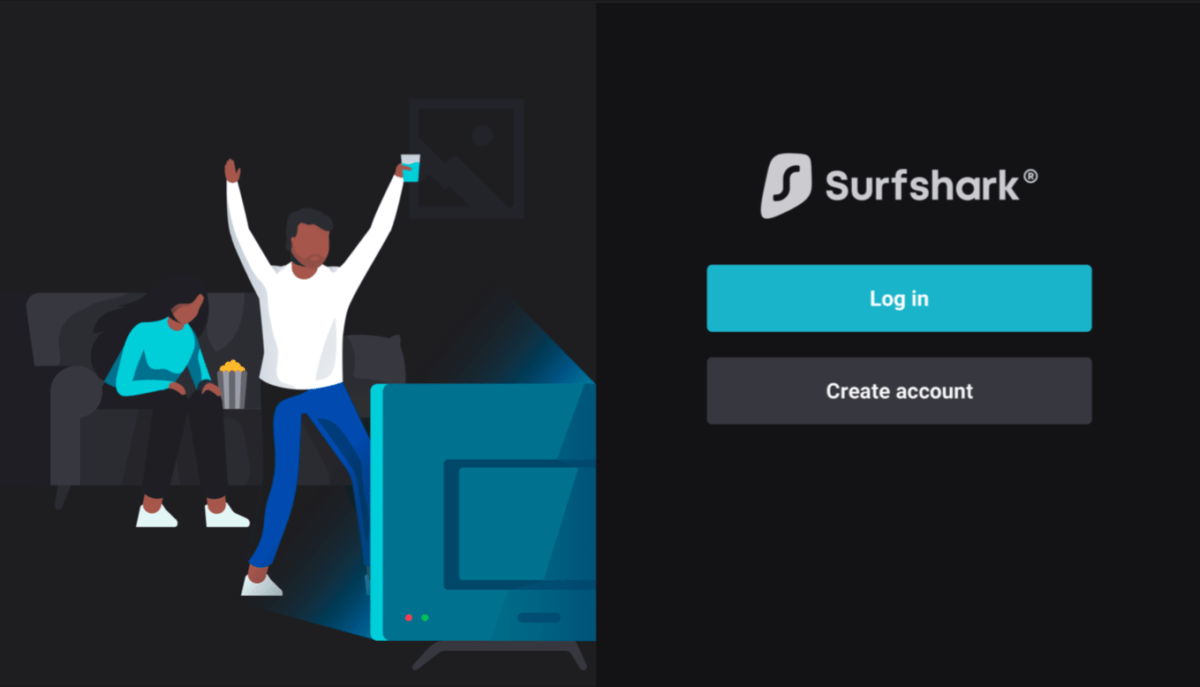 Installation is as easy as installing an app on your phone

In the case of Surfshark VPN, it even offers you to spare you the need to enter the password. With his phone, just scan the QR code displayed by the TV to connect.

Once connected, you must then choose a server from the proposed list and connect to it with one click. Then choose the server located in a country where your favorite SVOD platform has a larger catalog (often the United States). Once connected, do not touch anything and return to the main menu of your TV.

Here ! all you have to do is launch the application of your favorite SVOD platform and discover the many films and series and films that are not offered in France by default, but that you just unlocked. The hardest part will be making a choice, especially with your family, but we’re sure you’ll find common ground.

How to properly use your VPN on Android TV?

As on mobile, the VPN’s Android TV application offers you several servers located in different countries. By choosing for example a server located in the United States, the IP address that will be assigned to you will make your SVOD service believe that you are physically on American soil, and will then offer you the American catalog. It’s very simple: it’s up to you to select the server / country of your choice.

The interface of the VPN app on Android TV allows you to quickly navigate between different servers and locations, and even set some as favorites to find them easily. Connecting to a server requires only one click and one to two seconds of waiting, and you can switch servers without any problem whenever you want, by going back to the Surfshark app. 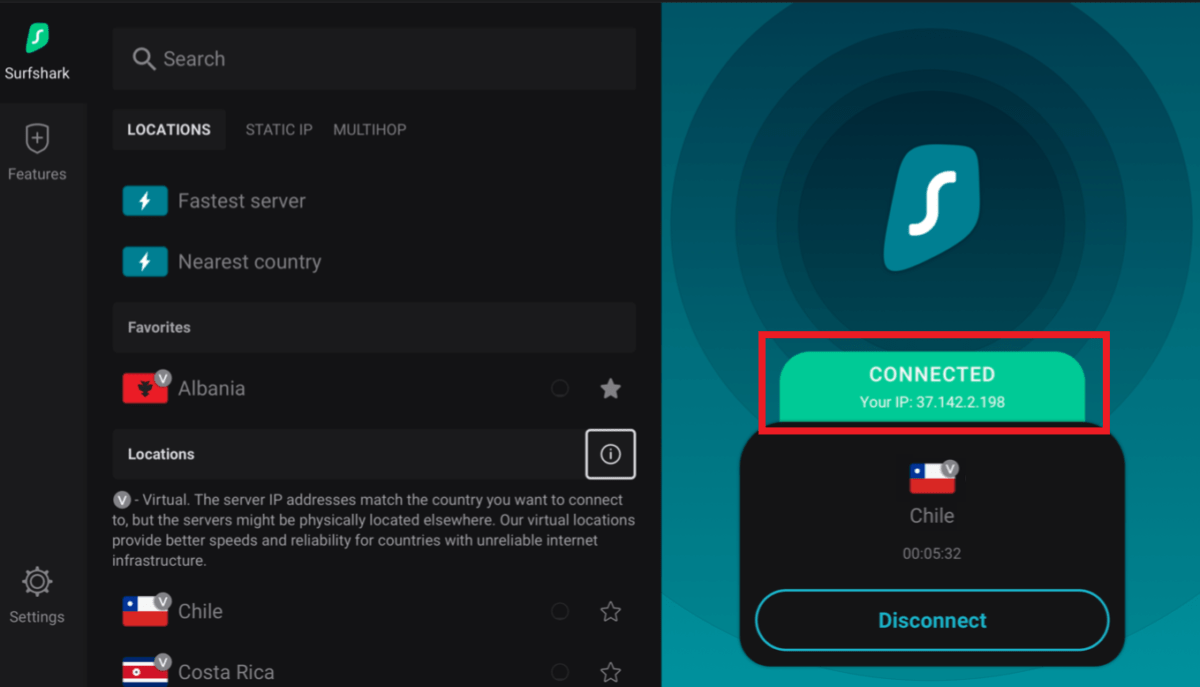 The interface offered is very simple, no technical knowledge is required

Are you unsure whether you are connected to the foreign server? A quick glance is enough: if the connection window is green, you have successfully connected to the server. Your Internet connection is then secure and you can enjoy your series in peace.

With no less than 1,700 servers in 63 countries, Surfshark allows you to easily unblock SVOD catalogs from a number of countries – 15 different countries for Netflix for example. To cover all your uses and follow you on a daily basis, Surfshark is available on the vast majority of platforms : Android, iOS, Windows, macOS, Linux, Chrome, Firefox, Xbox, PlayStation, Apple TV, Fire TV, not to mention Android TV you will understand. 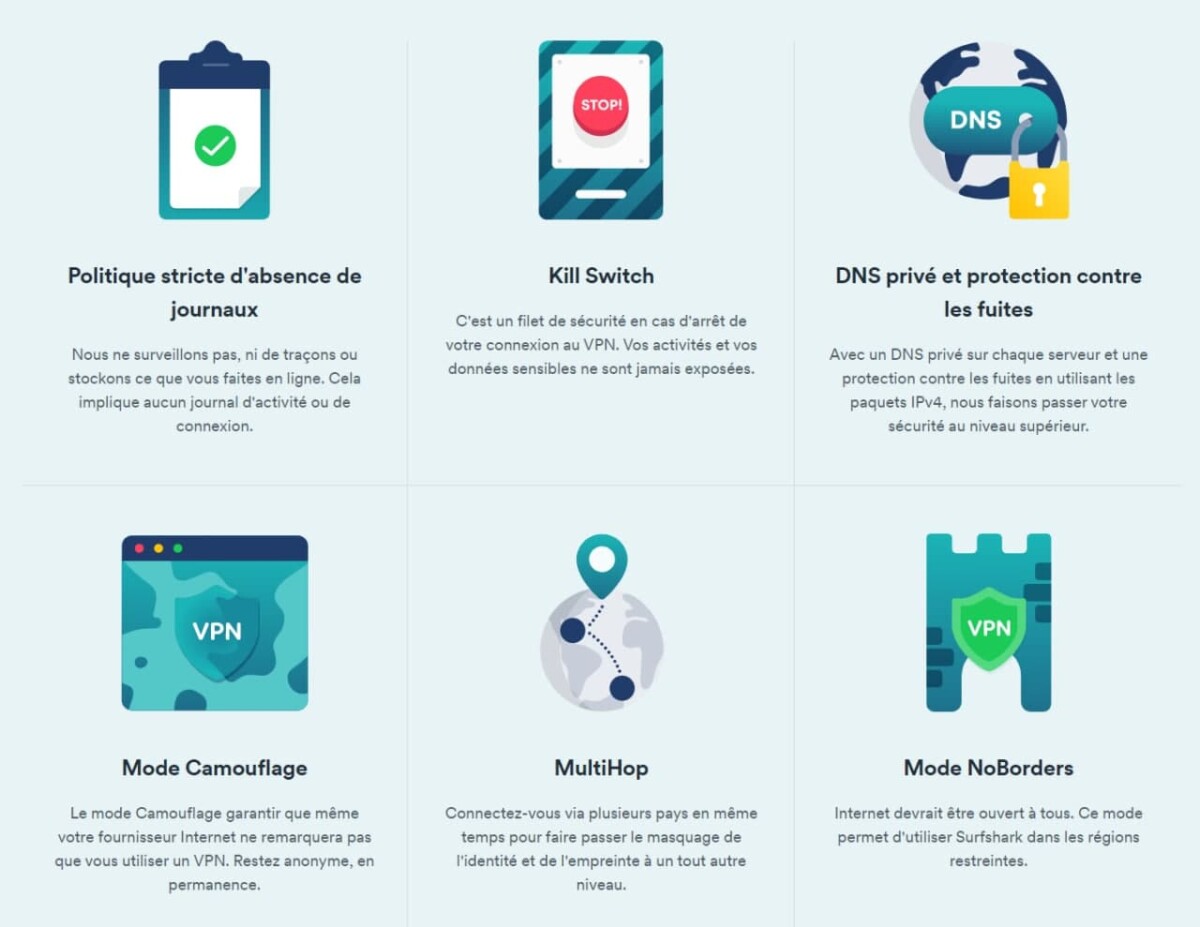 Some features offered by Surfshark

The list of features offered is long and comprehensive, and here are just a few examples. Whitelister mode allows you toexclude certain websites and applications from the VPN connection. You can also use the double VPN option to have your connection go through two different servers. add a layer of security. As for the KillSwitch mode, it will automatically disconnect your device from the Internet if the connection to the server were to be cut momentarily – in order to never compromise your security.

Surfshark’s 24-month plan comes at a great price: 2.15 euros per month, just over 50 euros for two years of use. This is one of the cheapest deals on the market and to top it off, know that Surfshark can be used on an unlimited number of devices, all without bandwidth limit. The package is even fully refundable for 30 days if you are not satisfied with the offer.