Mercedes has lifted the veil on its new C-Class. A sedan and a station wagon that adopt MBUX 2 as well as a new plug-in hybrid engine with 100 kilometers of autonomy in the WLTP cycle. 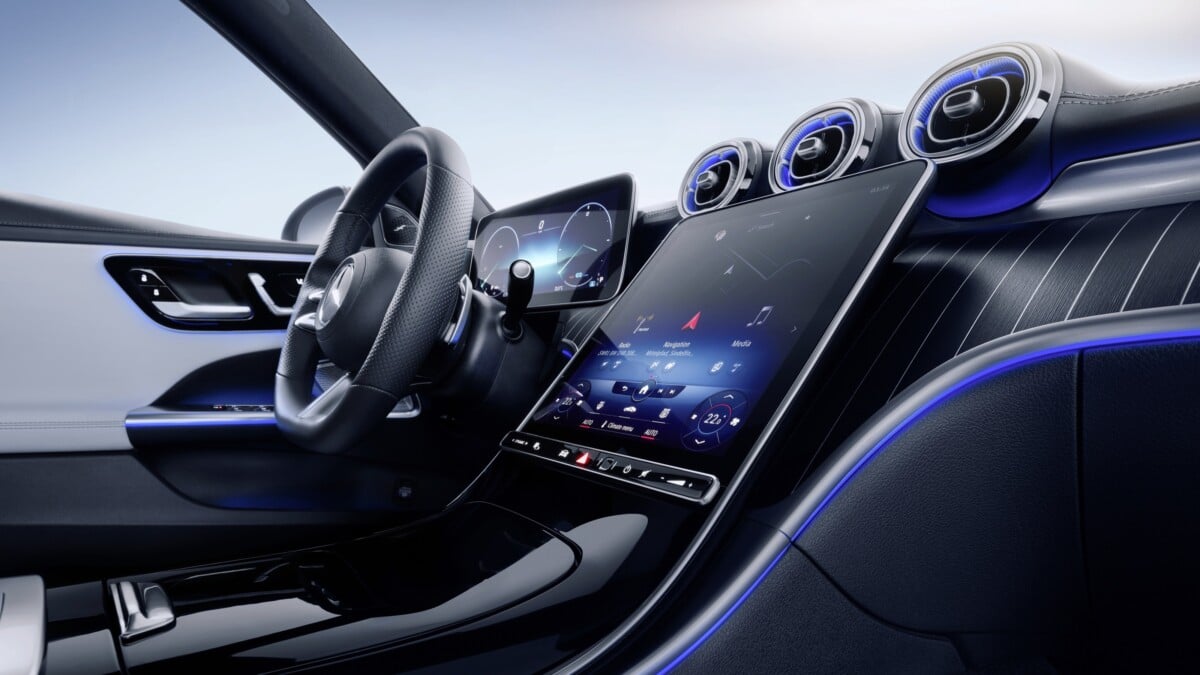 MBUX 2 in the Mercedes C-Class

Mercedes-Benz presented the new mid-range model, C-Class, a sedan and station wagon which in the process adopted the 2nd generation MBUX system.

At the end of 2019, we published a large report on the MBUX 1, it is the infotainment system that equips high-end Mercedes-Benz. Henceforth, MBUX will therefore also be on the mid-range.

MBUX 2: a partnership with Nvidia even on the C class

The infotainment system, controlled by an Nvidia Xavier SoC, is now present on the vertical “tablet” in the center console. This is because the MBUX 2 system of the new C-Class comes with a 9.5-inch diagonal screen as standard and a larger 11.9-inch version as an option. There is still a difference to note: Mercedes-Benz uses LCD screens in the C-Class, while the S-Class is equipped with a 12.8-inch OLED display.

Important controls, for example for the air conditioning system, are always displayed at the bottom of the screen, and there are also physical buttons for the driving program, the hazard warning lights or the volume below the screen. Mercedes-Benz therefore retains a lot of physical buttons.

This is also where the fingerprint sensor, You can create multiple profiles that can use this biometric system to log into the system and thus automatically program certain presets. Among the tweaks there are for example the streaming providers: Amazon, Spotify and Tidal – you will notice that Apple and Google are still absent.

When viewing the MBUX, the driver can choose between a classic, sporty and discreet layout. There is also an “assistance mode” which allows the traffic situation to be mapped in real time.

The alignment of the dashboard and center display is interesting because they are tilted slightly six degrees to the driver. The driver-oriented cockpit was once a typical BMW feature, but that has changed.

In addition to the touch screen and buttons, you can use a voice assistant via the command “Hey Mercedes “. You have access to navigation and music, voice control also includes management of air conditioning and other vehicle functions. If necessary, the voice assistant can also talk to you about the characteristics of the vehicle or indicate the position of the first aid kit.

This “Hey Mercedes»Also supports connected home control. Bosch Smart Home and Samsung SmartThings will be compatible, so that the temperature and lighting, shutters and electrical devices can be controlled remotely. Other connected home partners are to be announced later.

Another screen sits directly in front of the driver behind the steering wheel and functions as a purely digital dashboard. You have the choice of a standard 10.25 inch screen or an optional 12.3 inch screen. Note that the optional 3D display, as in the S-Class, is not available in the new C-Class. There is also a head-up display (HUD), but it is not as comprehensive as on the Class. S.

The functions ofautopilothave also evolved. The C-Class will therefore be more responsive and especially at higher speeds. This makes it possible to control the trajectory of the vehicle, the presence of obstacles on the road … but also other cars. The stop sign and red light warning functions are also new to the Traffic Sign Assistant.

A fourth generation of hybrid