Canal + has regained popularity since the addition of various streaming platforms to its offerings. The limited edition one that includes Disney + is now available at an advantageous price: only 19.90 euros per month instead of 26.90. 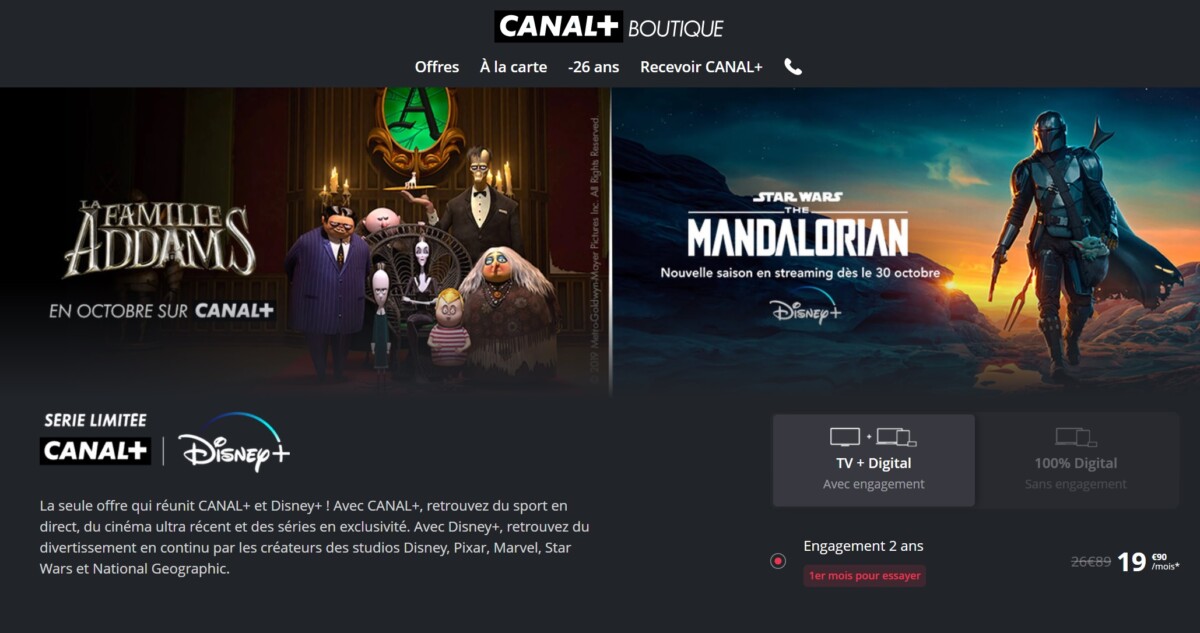 Do you want to watch Star Wars The Mandalorian season 2 which arrives on October 30, 2020 or enjoy many unreleased films and other exclusive series? All this is possible with the limited series of Canal + with Disney +. Furthermore, the price of this new formula is on promotion!

Instead of 26.90 euros, the Canal + and Disney + subscription is available at only 19.90 euros per month. The offer comes with a two-year commitment where the price is fixed over the entire period, but be aware that you can just try the first month if you are not satisfied with the service.

Canal + offers a large catalog of content. Feature films are often found there shortly after their theatrical screening. Without forgetting the original Canal + creations, major international series and the best of sport. You will only have access to the main channel and Canal + Décalé via this offer.

Disney + is also in the game with more than 500 films and 300 series on the Disney universe, but also Marvel, Pixar, Star Wars and even National Geographic through numerous documentaries. With the rights of FOX, we even find all the episodes of The Simpsons, 31 seasons. The content continues to grow and will also host the second season of The Mandalorian on October 30.

That being said, this offer allows you to enjoy all the content mentioned above on your TV via your internet box, Android TV or Apple TV, but also on smartphones and tablets via the dedicated applications on iOS or Android, with MyCanal and Disney +. PCs are obviously not forgotten by simply going through your favorite browser.

Note that it is also possible to stream the content to another screen with the Chromecast feature, or even with AirPlay.

For larger consumers, we recommend the “Canal + and CINE SERIES + pack” subscription which also includes all Canal + channels, Netflix and OCS subscriptions as well as other cinema channels. for 34.90 euros per month instead of 49.90, still with a 2-year commitment.

To learn even more about the different streaming platforms available in France, we invite you now to consult our guide to the best SVOD services in 2020.