As of December 14, Apple is implementing one of its commitments regarding the confidentiality of personal data: each developer of mobile applications will have to publish a summary of the use made of the latter. 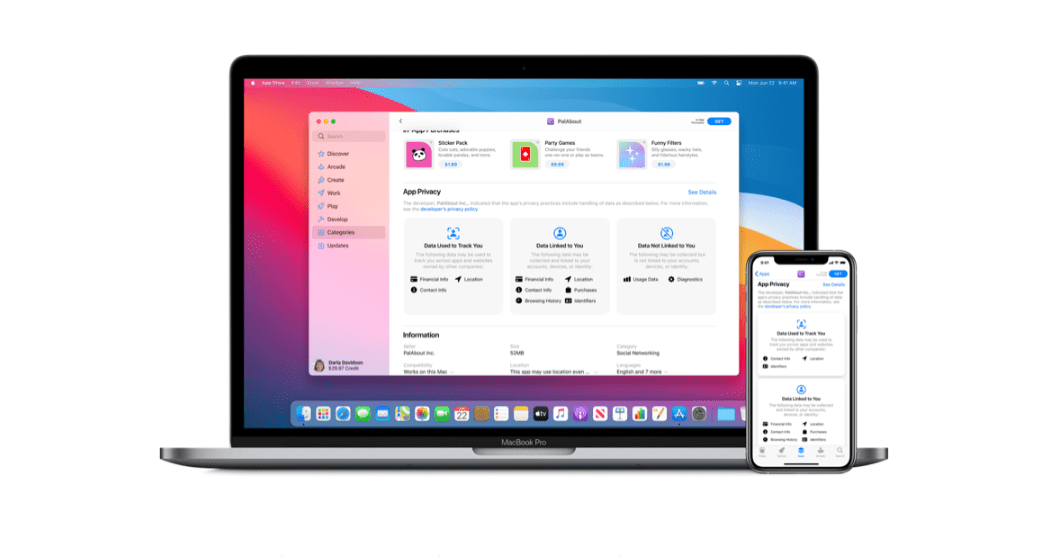 Apple asks its developers to provide better information on their apps // Gamesdone: Apple

A desire for transparency. This is how Apple summarizes its data privacy policy. The Californian firm keeps repeating that it is not interested in our personal data, that it does not store anything and encrypts everything. But it does not always have control over the use that the developers it hosts on its stores make of it.

With iOS 14, the Apple brand has already seriously tightened the screw around privacy by introducing new privacy rules, just like in the new Safari rolled out in the fall. We find in particular the authorization to ask users to be able to collect and share their data (in order to better target advertising especially), their geolocation, the possibility of knowing when you are tracked or not (orange dot for registration at the top of screen), etc. Facebook had begun to express its annoyance with this measure, which, if users prohibited its use, could harm its advertising revenue. But in vain.

Know what happens to your data

At WWDC 2020, Apple promised its users to better inform them about how developers use their data when an app is downloaded from the App Store. And it is now being deployed.

As of Monday, December 14, Apple will publish on its various stores (iOS, iPadOS, macOS, watchOS and tvOS) new sheets for apps now including privacy information. One way to forge a pact between its developers and its users “for more transparency and security ».

Gradually, the apps will be enriched with this much better highlighted confidentiality information, like the safety data sheets on food products, to tell you if your data is “used to track you”, “linked to you” or “Not related to you”.

Apps will have to display the use they make of your personal data // Gamesdone: Apple

However, not everything is immediately available. Because, if the developers have been informed for several months, the implementation is quite long. They must provide information via the App Store Connect online tool, which allows them to validate a new app as a simple update. “It doesn’t force developers to make any changes to their app or business model.», Says Apple. “It is simply a matter of providing users with transparency on the data that they collect, use to track and be linked to the user. ».

They will now have to provide a list of information on the app sheet. You will thus know if your email, your name or any other personal data (health, sensitive data, advertisements viewed, content consulted, browsing history, purchases or purchase research, etc.) is collected and for what use. If this is used to track your movements as a defined individual or not, the app will have to indicate it. This will give you a better idea of ​​who is reselling your data for advertising purposes to whom.

The privacy policy should also be specified, “including those of third-party partners whose code you integrate into your application”(Analysis tools, advertising, SDK, external suppliers…) or for limited situations.

This will especially allow the user of iPhone, iPad, Mac or even Apple Watch to be better informed before downloading an app and to understand its privacy practices. A new dimension which thus imposes a few obligations on developers. Because each company behind an app must also provide information about itself to be transparent (information on the manager in particular) and be able to answer customers’ questions on the use of data.

Apple thus wants to make the developers it welcomes the guarantors of your confidentiality and the protection of your privacy. “This is the start of an innovative new program to help users have more transparency and a better understanding of how applications use their data and what they can collect.“, We are told at Apple. “We firmly believe that all data collection and use practices by developers should be transparent so that users can make informed decisions. »

What do developers risk if they do not respect App Store instructions and the new confidentiality requests? A delayed upload of a new app or an update, since Apple will not validate the request. And if this continues, we are told on the side of Cupertino that developers will be invited to go see elsewhere on another Store.

The program is set to evolve, and no doubt Tim Cook and his people will add more privacy requirements. And to better inform users, Apple is also updating its mini-site on data privacy and the possible settings in its products or services. To also apply to oneself its demands for transparency.

A study takes stock of the commission rates charged by the various app stores and digital content platforms. The opportunity to see what really goes in the pocket of developers and …
Read more