On the occasion of the International Day of People with Disabilities, this Thursday, December 3, Apple is updating its mini-site on accessibility. More than ever, iOS 14 and the latest iPhone 12 Pro have brought important innovations for all types of disabilities.

Year after year, Apple has made the accessibility of its products one of the pillars of its thinking. “A continuum” and a way to further personalize a device “for all”. But the strength of the Cupertino company lies in being able to combine hardware and software, and thus offer continuity to all its users. And this year, more than ever, she has linked the two to allow even more people with disabilities to evolve in an environment that has not always been suitable for them.

All about the possibilities of the products

To celebrate the International Day of Persons with Disabilities this December 3, Apple decided to highlight even better all the strengths of its products, whether you are visually impaired, hard of hearing, embarrassed by a physical handicap. The pages related to accessibility are thus getting a new look to integrate all the new features brought by the iPhone 12 Pro in particular and iOS 14.

With all of its on-board accessibility options, the iPhone has long been a recognized assistive device. VoiceOver for reading aloud, voice control, font enlargement, recognition of text or sounds… the iOS operating system is hailed for its multitude of possibilities offered to the disabled who find themselves much more independent.

The new site launched this Thursday will highlight all the customization possibilities for each product, divided into four areas (vision, mobility, hearing, cognitive). The Californian company hopes that the advice and information presented on its pages will serve as useful resources for its users, whether or not they are disabled. Because many of its advances have often been used by able-bodied people.

Dozens of features are presented, some in the form of videos in the same spirit as the “How to” collection published on the Apple YouTube channel or on the support channel. They are also videos to explain option settings (use of the magnifying glass while pointing the iPhone; activation of the options of the interface of the Mac, iPhone or iPad with voice command; how to take a selfie with Voice Control…).

If the iPhone already allowed to have a voice description of all the elements of a photo, complete sentences to describe a scene, the adjustment of the touch areas of the screen for interactions and text recognition, iOS does a giant leap this year.

With the arrival of iOS 14, Apple has added new features that will improve the lives of many.

Once activated, this function will allow the hearing-impaired user to be notified by a notification when their iPhone detects certain sounds such as a fire alarm, the doorbell, baby crying or barking. The haptic feedback of the iPhone will also alert the owner who can customize the type of alerts that must be reported. It is the machine learning of the iPhone that helps identify needs and improves detection by capturing everyday noises. 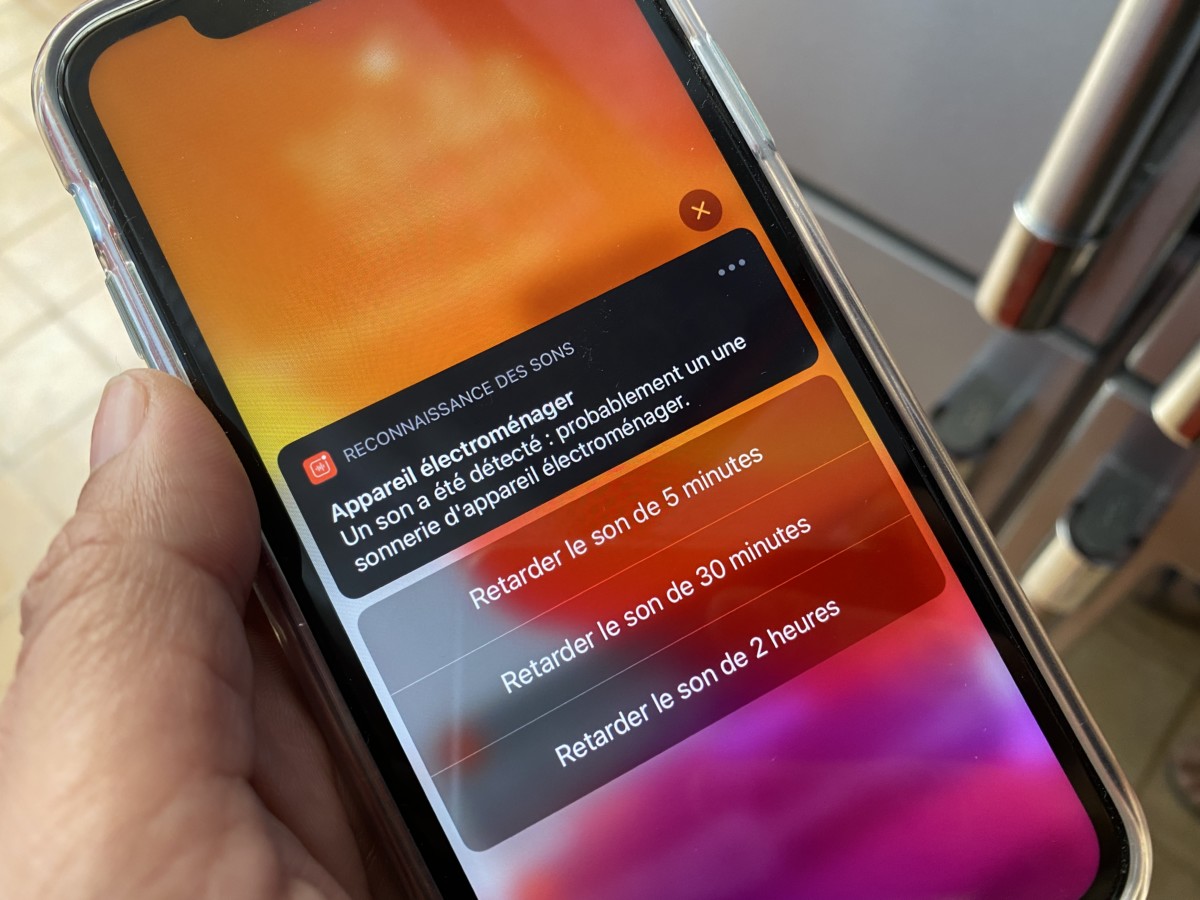 You are warned if a sound is detected // Gamesdone: Frandroid

It is about adjusting the headphones according to your hearing needs. This will allow in particular to amplify certain frequencies or small sounds. Audiogram owners can add it to the settings. Hearing tests are also available to help with setup, also taking into account your audio preferences. The audio quality will then be greatly improved, whether for listening to music or for better perceiving the noises and voices in your environment. It is thus possible to adapt the volume according to where you are.

It works with AirPods Pro, 2nd Generation AirPods, and some Beats headphones.

The options for customizing audio settings in iOS 14

Called “Touching the back of the device” in French, this function allows you to configure quick settings, access to certain features (screenshot, photo capture, opening the interface, launching an app, etc.) by tapping two or three times on the back of the iPhone. It can also be a series of custom tasks. 24 actions are proposed by default, but it is possible to create your own routines.

In a group chat on FaceTime, it happens that a person speaks sign language. iOS 14 will now allow it to stay in the foreground during the video call, regardless of the number of participants. And when you know that it can go up to 32 people, the function will come in handy.