The Radeon RX 6800 XT is AMD’s new consumer spearhead in the graphics card market. It is she who must compete with the new GeForce RTX 3080 from Nvidia. Let’s see that in our test! 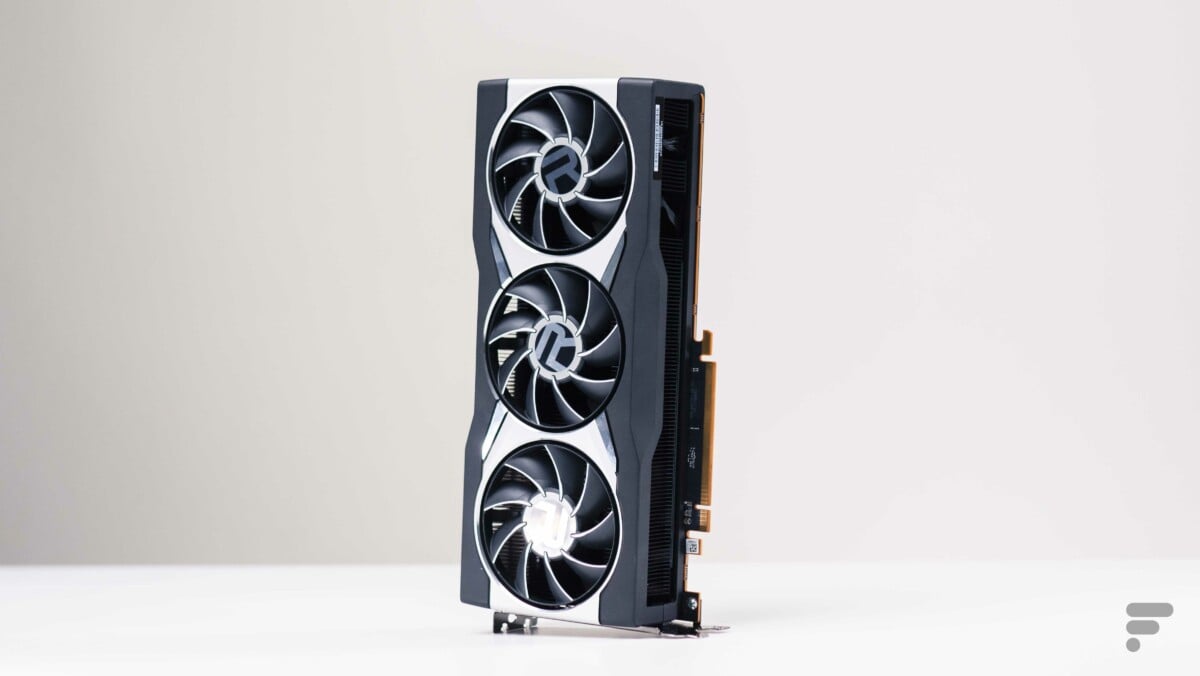 After many years of dominance by Nvidia in terms of performance, AMD finally seems ready for a return to the front of the graphics card scene. The manufacturer has worked at length on its new RDNA 2 architecture, the first to offer ray tracing with DirectX Raytracing. We had started to discover its capabilities with the Radeon RX 6800, but it is the XT model that represents the spearhead of the new AMD range.

The reference Radeon RX6800XT, marketed by AMD directly, takes the design of the RX 6800 that we were able to test. We find this large backplate on the entire back face of the card, and this large 2-slot radiator topped with three fans. The card is not only imposing, it is also quite heavy with 1.5 kg on the scale. It will therefore be necessary to screw the card to the chassis to avoid damaging the PCI-Express port. 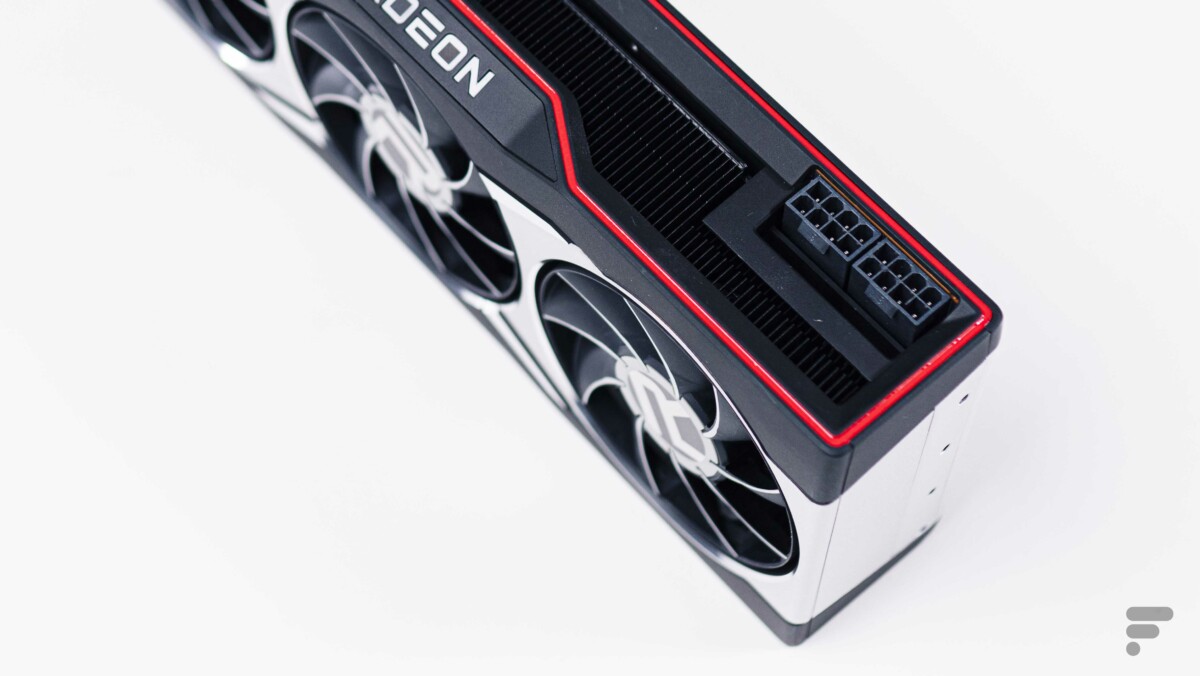 This weight can sound like good news, it means that the radiator is particularly wide, to dissipate as much as possible the thermal emissions of the GPU and the other components of the card (video memory, VRM, etc.). The card is powered by two 8-pin PCI-E ports. 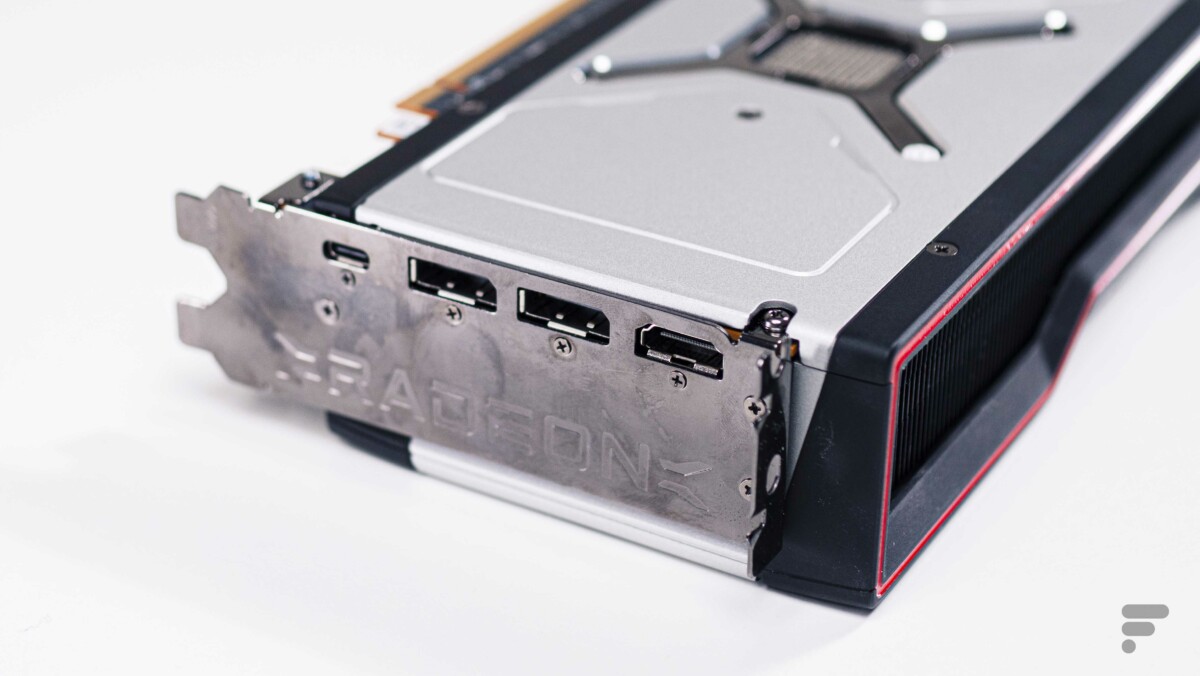 On the video side, there is an HDMI 2.1 port, two DisplayPort 1.4 ports and a USB-C VirtualLink port for compatible virtual reality headsets.

NB: this test was carried out with a model loaned by AMD.

Here is the configuration of the PC with which we tested the graphics card.

We are working on modifying our configuration for future graphics card testing.

We used three screens at our disposal for this test:

3DMark is one of the privileged tools for quickly measuring the power of a graphics card through a perfectly calibrated test. We are running the Time Spy test in the Extreme version, which uses the functions of DirectX 12 without ray tracing. This gives an idea of ​​the card’s performance on older generation games. 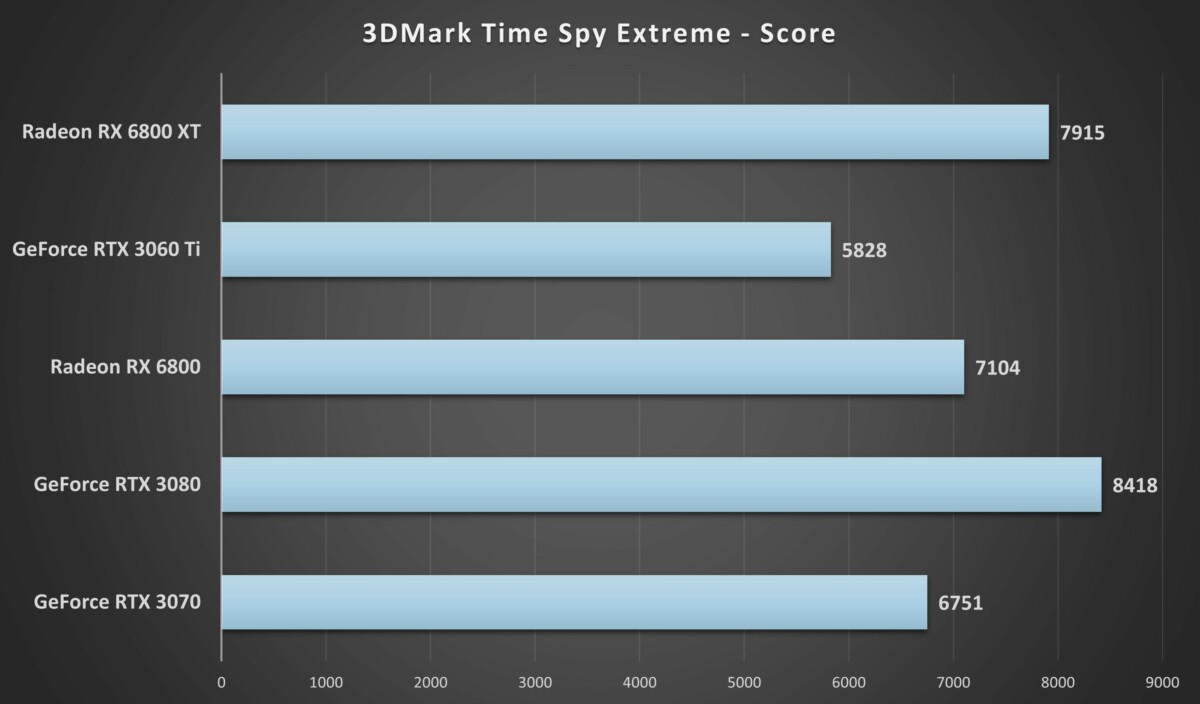 This is undoubtedly why the Radeon RX 6800 XT offers us very good results, since it comes up against Nvidia’s RTX 3080 with a score of 7915 points, approaching the 8418 points of Nvidia’s card.

3DMark offers a test entirely dedicated to the DirectX ray tracing API. The test consists in using almost only ray tracing, and little of the other sources of GPU power consumption. This really allows the chip’s capabilities to be assessed strictly on this type of calculation. 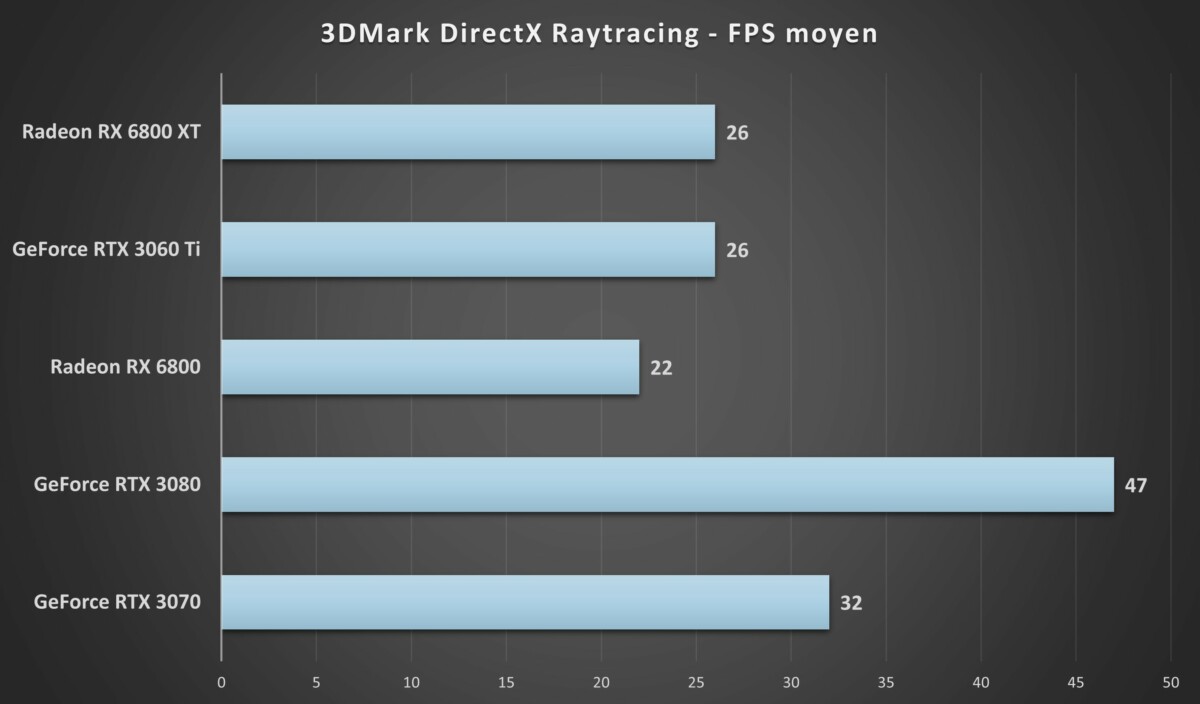 Here, we see that AMD’s RDNA 2 architecture is set back on ray tracing opposite Nvidia. The card only achieves 26 frames per second on average, a far cry from the 47 frames of the GeForce RTX 3080.

Benchmarks in games without ray tracing

The vast majority of older generation games do not use ray tracing, so it is important to assess the performance of the graphics card in these classic games.

Red Dead Redemption 2 is arguably one of the most technically ambitious games of recent years. It puts a strain on PCs in particular by pushing the graphics settings to the maximum. 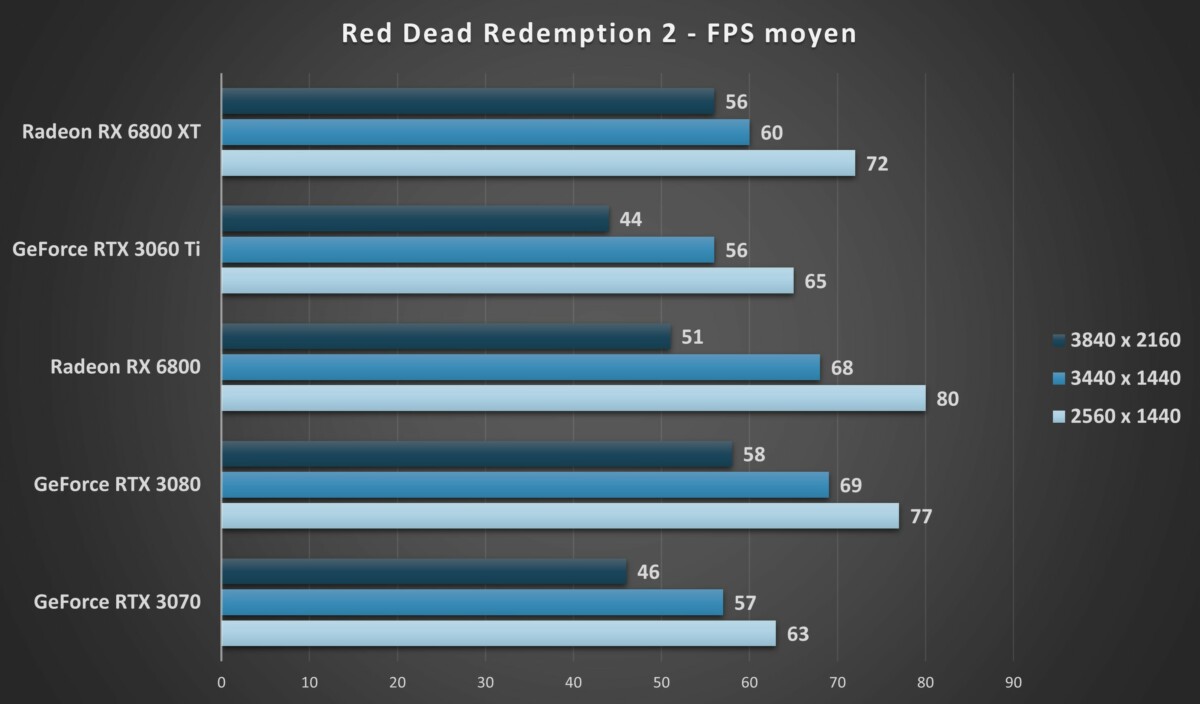 Here, the Radeon RX 6800 XT is doing quite well and manages to touch the 60 fps level in 4K UHD with its finger. You will have to play with a few options to play comfortably in this rendering definition, but it is a great achievement on AMD’s part. Again, AMD’s card comes very close to the RTX 3080 results. 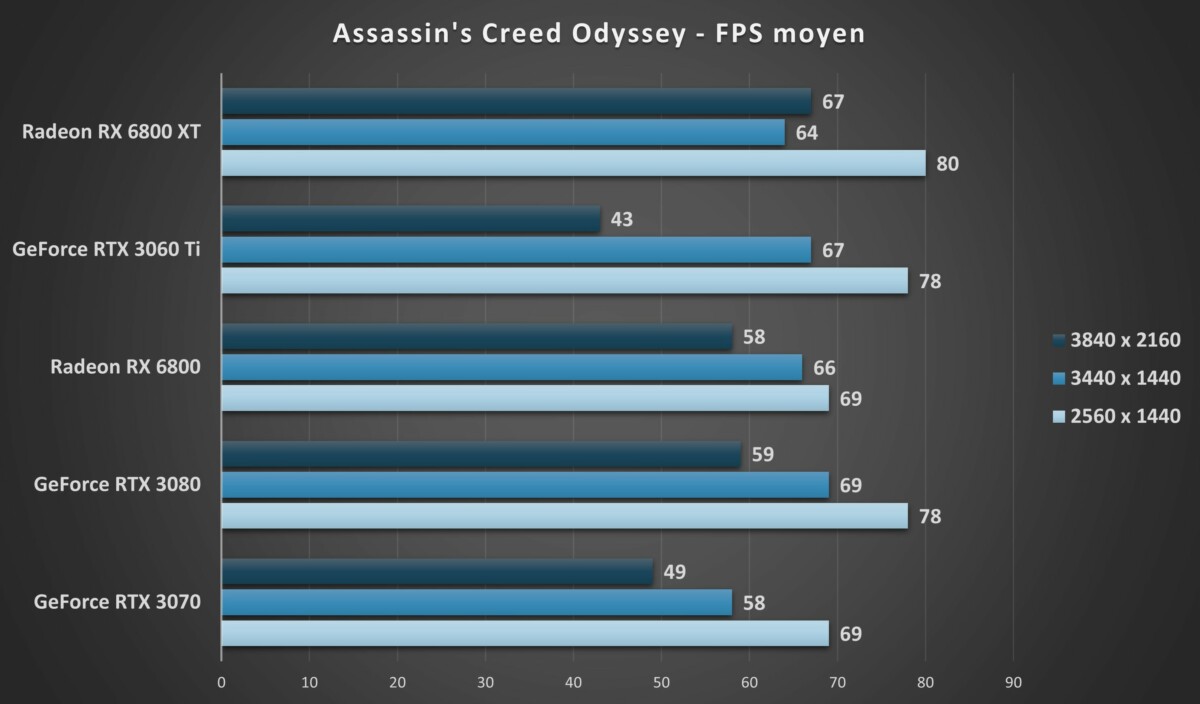 The important milestone of 60 images per second is exceeded in the three definitions that we tested. Ubisoft’s engine is known to be particularly resource-intensive, and we can see here that AMD’s card manages to exceed Nvidia’s RTX 3080, especially on a high definition.

Benchmarks in games with ray tracing

Ray tracing has been on everyone’s lips in video games for several months. It is the flagship technology of next-generation games. If Nvidia has cleared the ground, its adoption by console manufacturers should greatly accelerate its adoption.

Control quickly became the showcase for ray tracing thanks to its numerous reflections and sumptuous graphic effects. Unfortunately, the game of Remedy does not incorporate a standardized benchmark. To test the performance, we reproduce the same introductory scene, running through the first corridors, in order to have the closest possible experience between each test. 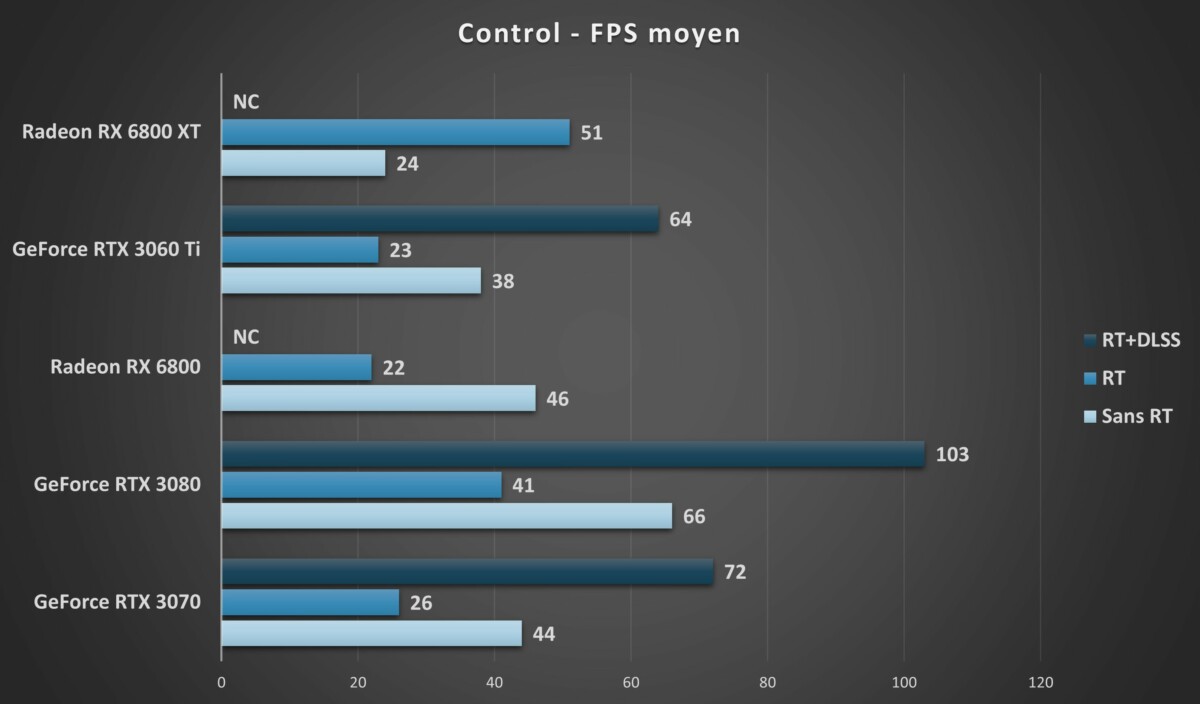 Raytracing is a very demanding technology and its activation affects performance. Where the Radeon RX 6800 XT manages to reach 51 FPS in 4K, it drops to just 24 FPS when ray tracing is activated. To compensate for this deficit, Nvidia can count on its DLSS technology that is not found at AMD for the moment. The difference is clear, since the RTX 3080 can then exceed 100 frames per second, even with ray tracing enabled.

Dirt 5 is one of the launch games for next-gen consoles. It is a game developed in partnership with AMD, and which includes a benchmark in the form of an automatic race. 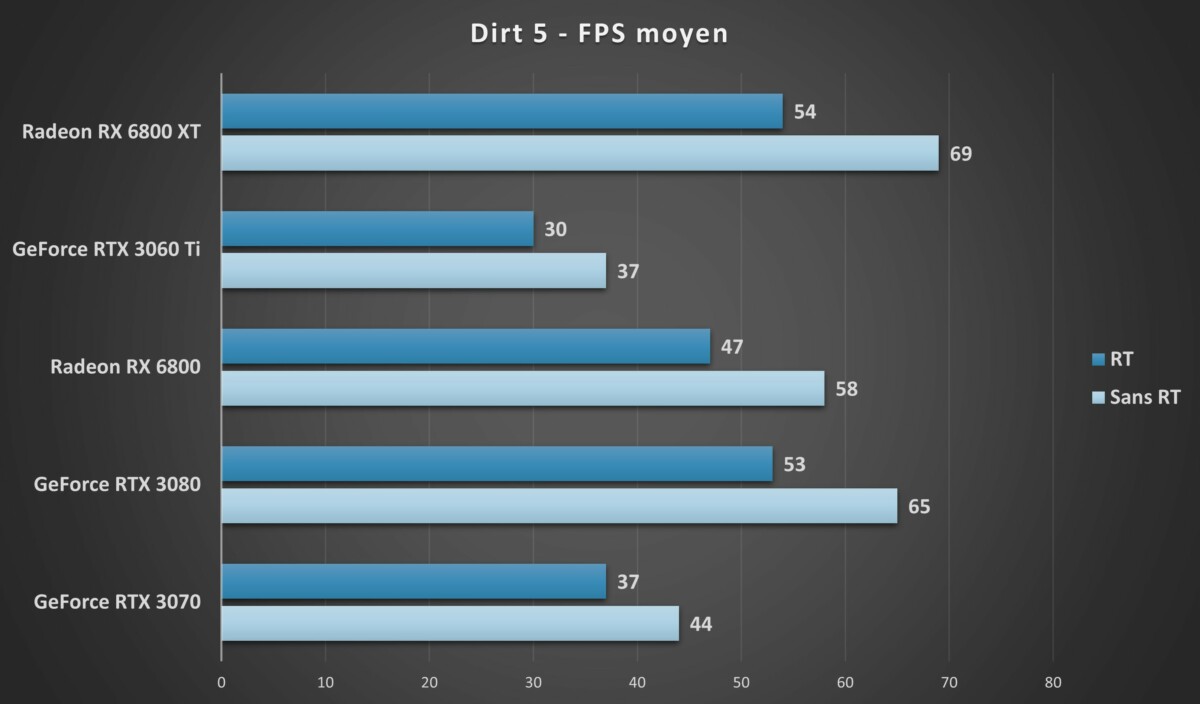 As it is overseen by AMD, the game does not offer Nvidia DLSS compatibility and the GeForces are therefore on an equal footing with the Radeon cards. Here the RX 6800 XT does it with top honors, at 54 frames per second and a good overall smoothness of the experience, which is very important for a racing game.

Watch Dogs Legion is the first game from Ubisoft to put the package on the effects of ray tracing to make its city of London, somewhat Orwellian, more graphically realistic. 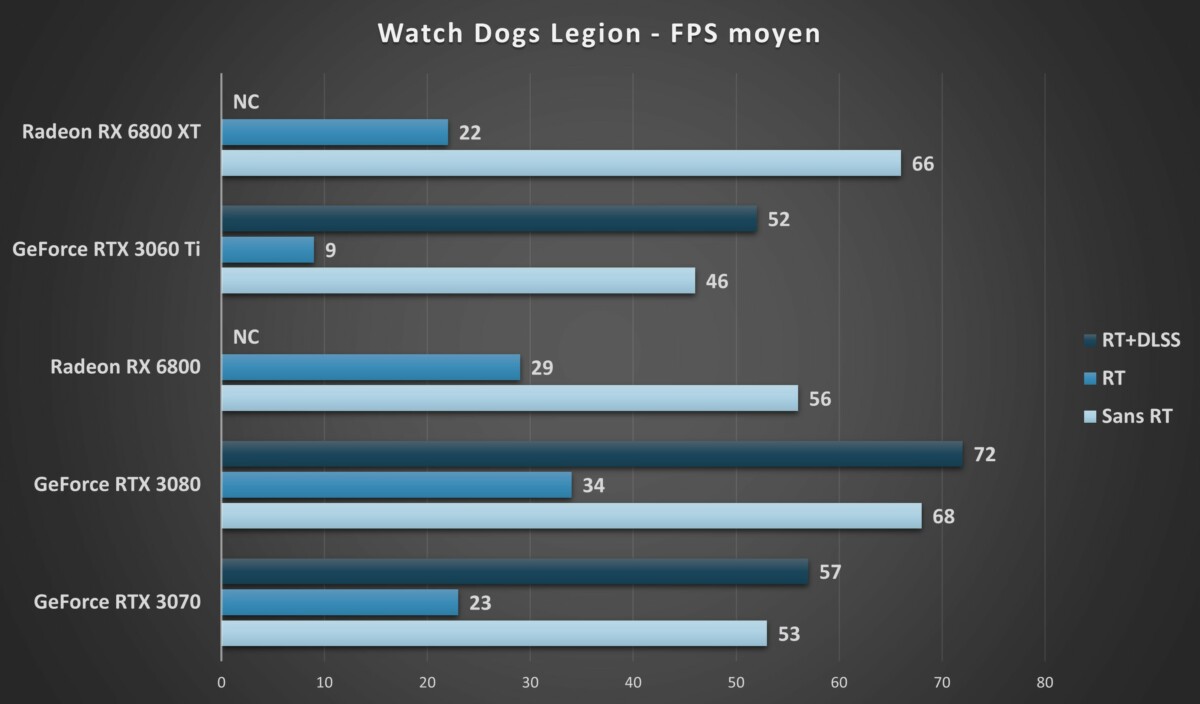 Then again, the RX 6800 XT suffers from the lack of an option similar to Nvidia’s DLSS. Performance drops to 22 frames per second, with many fluidity issues, while the GeForce RTX 3080 can display 72 frames per second on average thanks to its proprietary technology. In addition, putting aside our verse on DLSS, we can note that Nvidia’s cards are doing better on ray tracing effects.

However, we must remember how far AMD has traveled since its previous generation of graphics cards to appreciate the very important leap made by the brand. If it maintains this trajectory, the next generation of Radeon cards could beat the pawn in Nvidia.

To evaluate a graphics card, you must first measure its graphics power, then compare it to its power consumption to very logically determine its efficiency.

On this point, the Radeon RX 6800 XT has the merit of being rather economical compared to its power, since it consumes a maximum of 300W according to our measurements. As a reminder, we measured a maximum consumption of 320W for the RTX 3080, and 220W for the Radeon 6800.

If it is doing very well on energy consumption, the situation is a little more mixed on heat dissipation. First, the benchmark graphics card is somewhat heard in the most muscular action scenes. It is not very disturbing, and we are far from the noisiest cards in the sector, but it should be noted that the noise was noticeable without headphones on the ears. 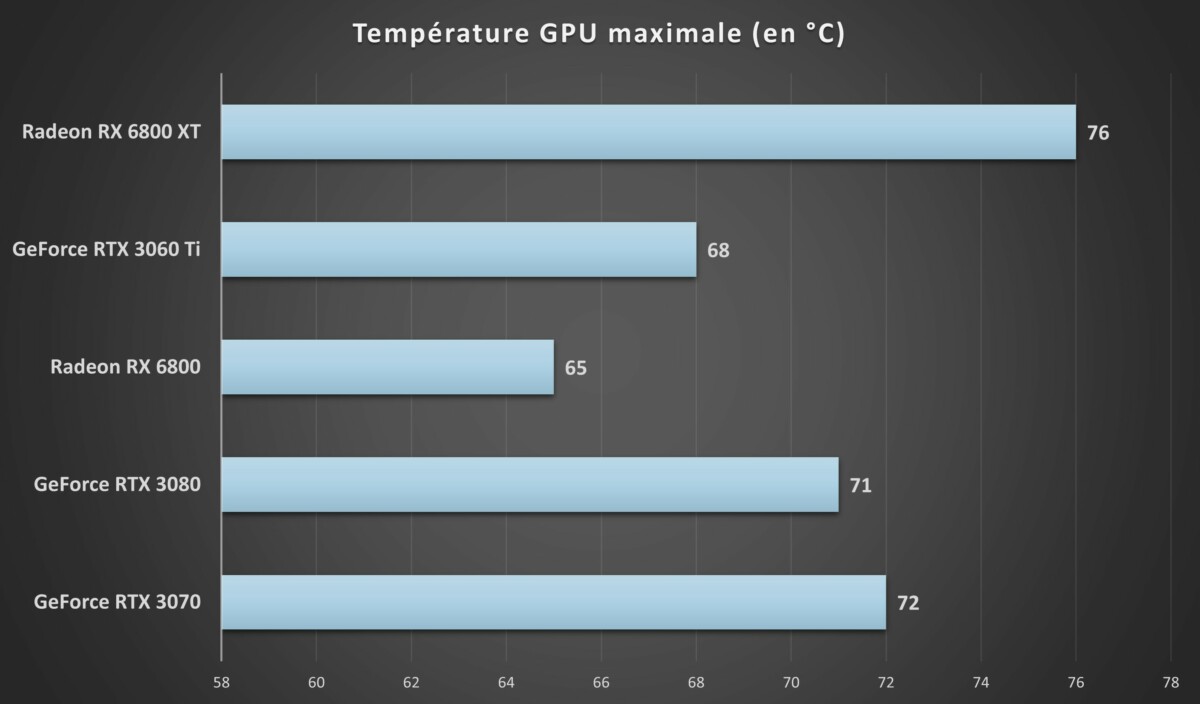 Despite the size of the heatsink, the graphics chip still reached 76 degrees in our tests, marking a nice gap with Nvidia’s Founders cards. We still remain in acceptable temperatures for a graphics chip pushed to the maximum.

We will not go into detail here on the software ecosystem surrounding Radeon graphics cards. This is exactly the same as the one we described in detail when testing the Radeon RX 6800. AMD today offers a wide selection of options and additional functions with its cards, much like the GeForce Experience suite. from Nvidia.

There is now the possibility to adjust and launch your favorite games, but also to stream them to a mobile device with the AMD Link application, or to record your favorite game moments to share them on social networks. The interface is quite intuitive and well worked out.

On the software ecosystem, AMD is for the moment in the background against Nvidia which regularly adds new functions using its “RTX”, such as Nvidia Broadcast or RTX Voice, and above all signs partnerships with software suppliers like Adobe to optimize the experience with its products. However, with AMD’s comeback, one can honestly hope that the software ecosystem of the red logo brand will improve in the years to come.

The AMD Radeon RX 6800 XT graphics card is priced at 649 euros. Unfortunately, like many other novelties at the end of 2020, the card suffers from very low availability which can increase prices at merchants.

At this price, AMD places itself under the GeForce RTX 3080, theoretically sold for 70 euros more by Nvidia.