As Black Friday approaches, there are exciting promotions on many Amazon branded products. If you want to equip yourself with a connected speaker, an HDMI key or even acquire a new e-reader, now is the time to take advantage! 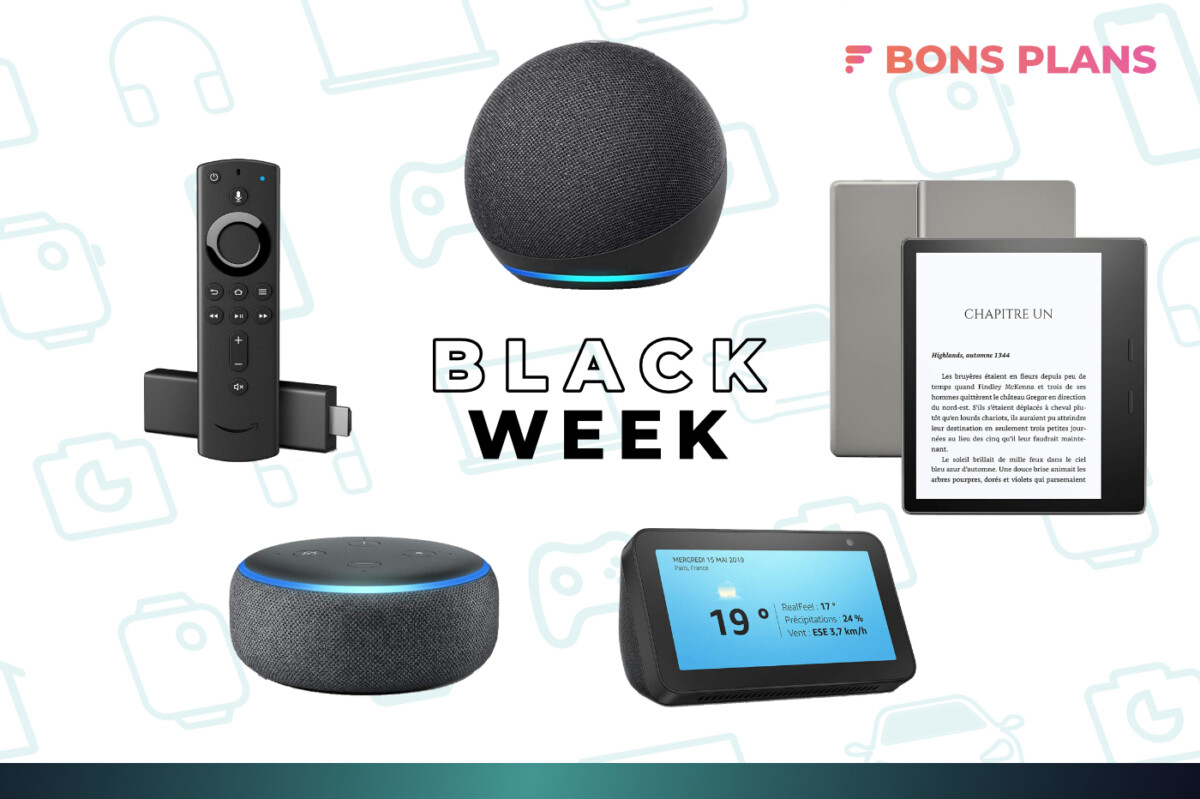 Amazon is not stingy with promotions when it comes to its own references. If you were looking to equip yourself without spending monstrous sums, you will be able to take advantage of the many discounts offered by the American giant as Black Friday approaches, and they concern a wide variety of products: from Fire Stick TV 4K to Smart Display Echo Show, including Echo Dot speakers and Kindle e-readers. 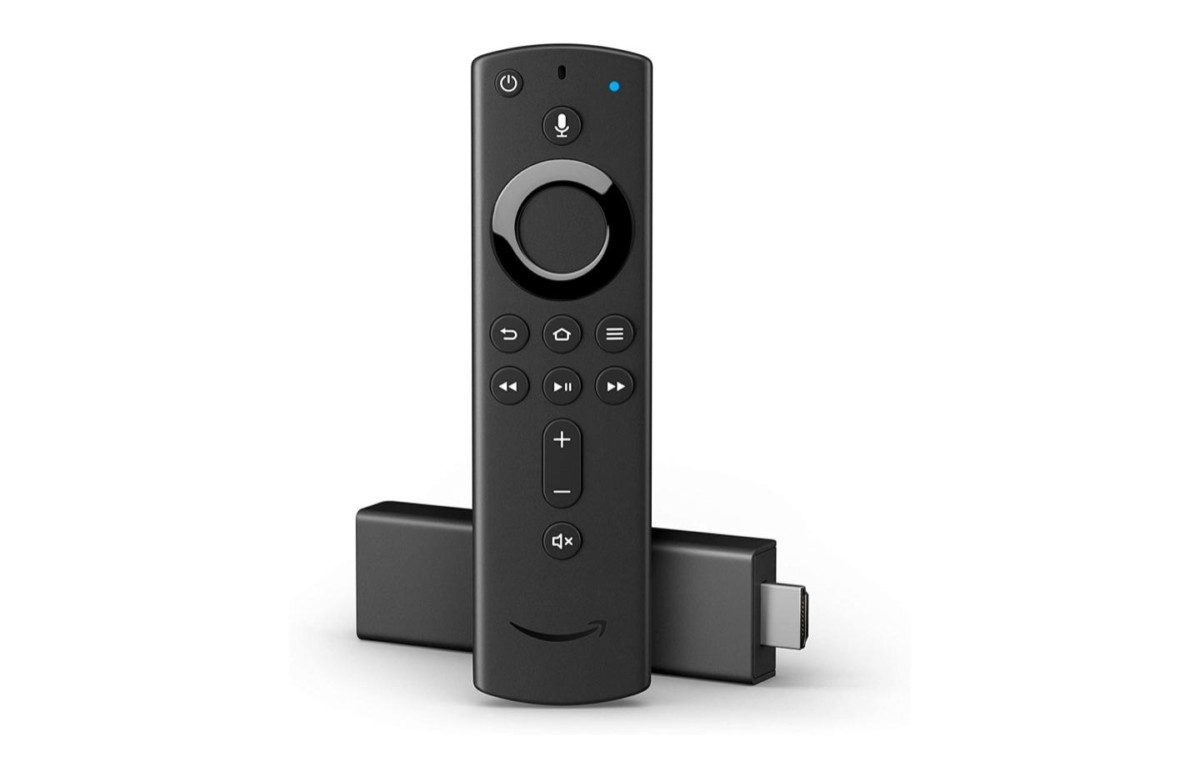 Presenting itself as an alternative to Apple TV and Android TV boxes, the Amazon Fire TV Stick 4K is an HDMI dongle that must be plugged into a TV, like a Chromecast. But unlike the latter, which requires a device such as a smartphone or tablet to distribute its content, Amazon’s solution is self-sufficient since it integrates its own operating system. Thanks to the remote control, which features the Alexa assistant, you can navigate the menus freely, or even perform voice commands. The application store is less extensive than its competitors Apple and Android TV, but the experience remains rich and very fluid.

This key is compatible with HDR content (HDR10, HDR10 + and Dolby Vision) as well as with Dolby Atmos. It can obviously display content in 4K UHD at 60 frames per second. To fully enjoy it, it is better to have a 4K television at home.

Why do we recommend this product? 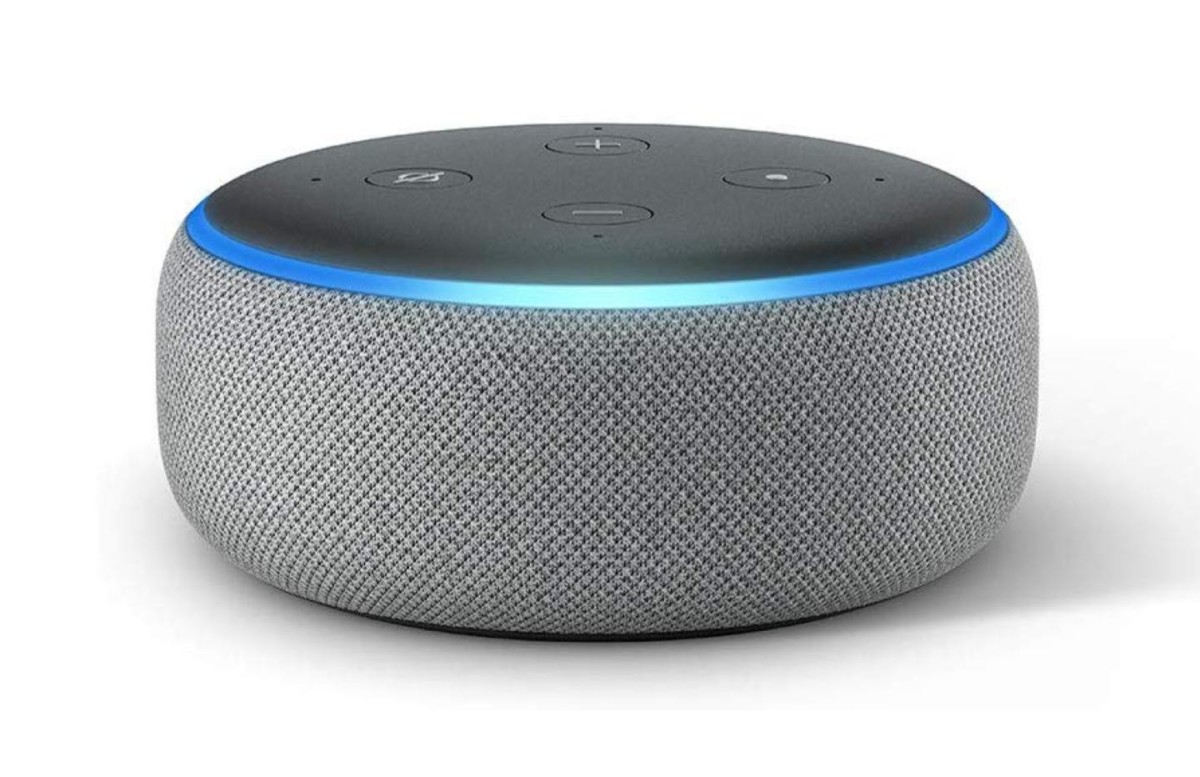 The 3rd Generation Amazon Echo Dot adopts a pebble-shaped design that will blend seamlessly into any interior. It is embellished with the now famous bright blue border that activates when the Alexa assistant is called upon. The speaker has 4 buttons on the front (Action / Disable the microphone / Increase the volume / Decrease the volume). Connected to a WiFi network, the device will execute all the requests requested.

The Echo Dot also has the advantage of having Skills, applications created by third-party services. Thanks to them, you will be able to expand the range of features in order to access services more easily, such as Uber to order a driver by voice, for example.

Finally, if the sound from the speaker is not sufficient for you, it will always be possible to connect an external audio system through its jack port.

Why do we recommend this product? 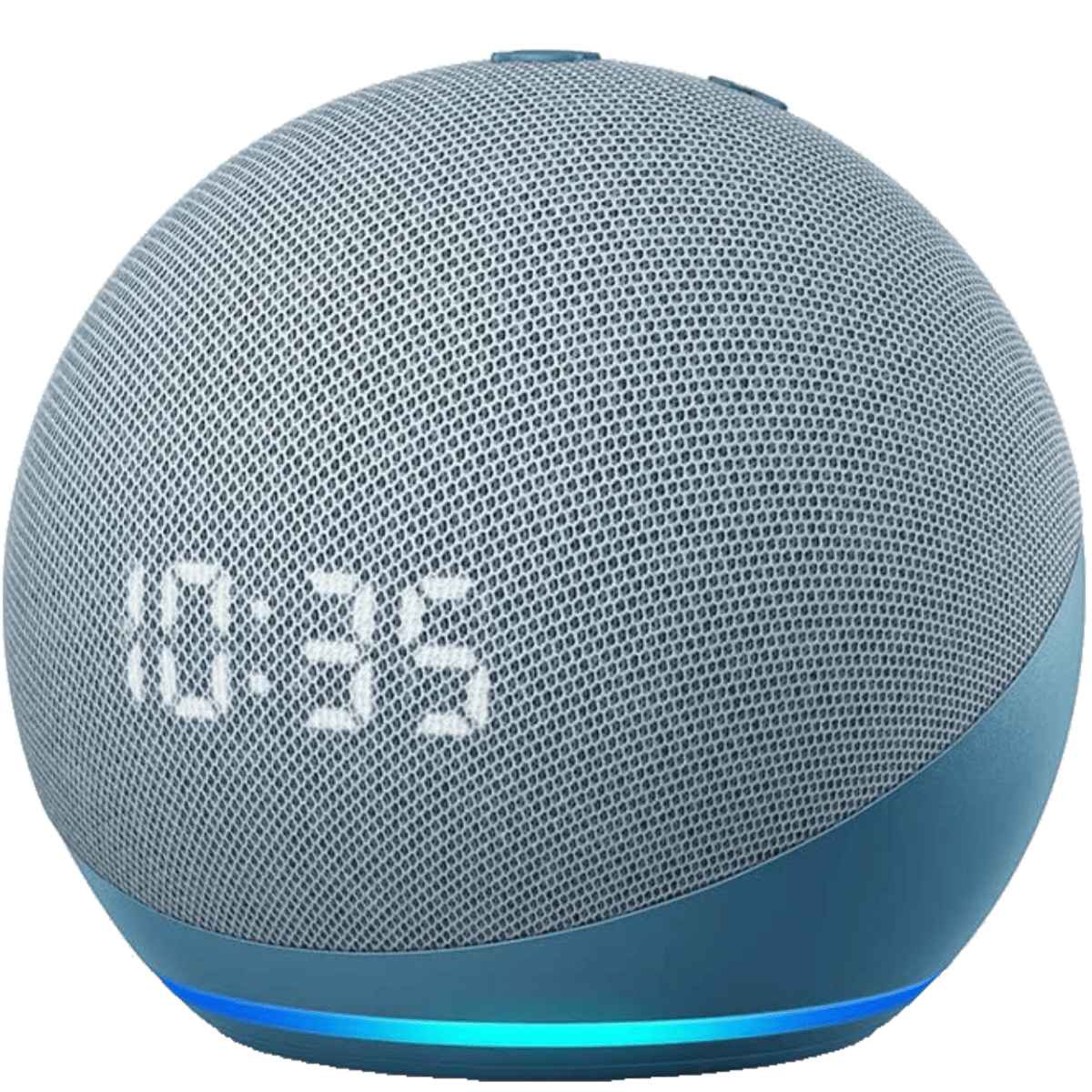 2020 was the year of change for Amazon’s Echo Dot smart speakers: the fourth generation adopts a more modern spherical design. The Echo Dot 2020 will still remain compact despite its taller dimensions. Amazon promises better audio performance, with deeper bass and crisp highs. The Echo Dot also detects the acoustics of the room to best adapt its sound content. The most music lovers will still make sure to connect another external audio system, thanks to the integrated jack port.

Skills are also part of the game, and you can of course control all your compatible home automation devices with your voice, as well as program alarms. This Echo Dot also has the advantage of integrating a virtual clock thanks to LEDs. Placed on a bedside table, this speaker will therefore be ideal used as an alarm clock. To learn even more, read our full review of the Amazon Echo Dot 2020.

Why is this product recommended?

The Echo Dot (4th generation) with integrated clock is now available at 39.99 euros instead of 69.99 euros.

The Echo Dot 4 is also available without the built-in clock. This is currently displayed at 29.99 euros instead of 59.99 euros. 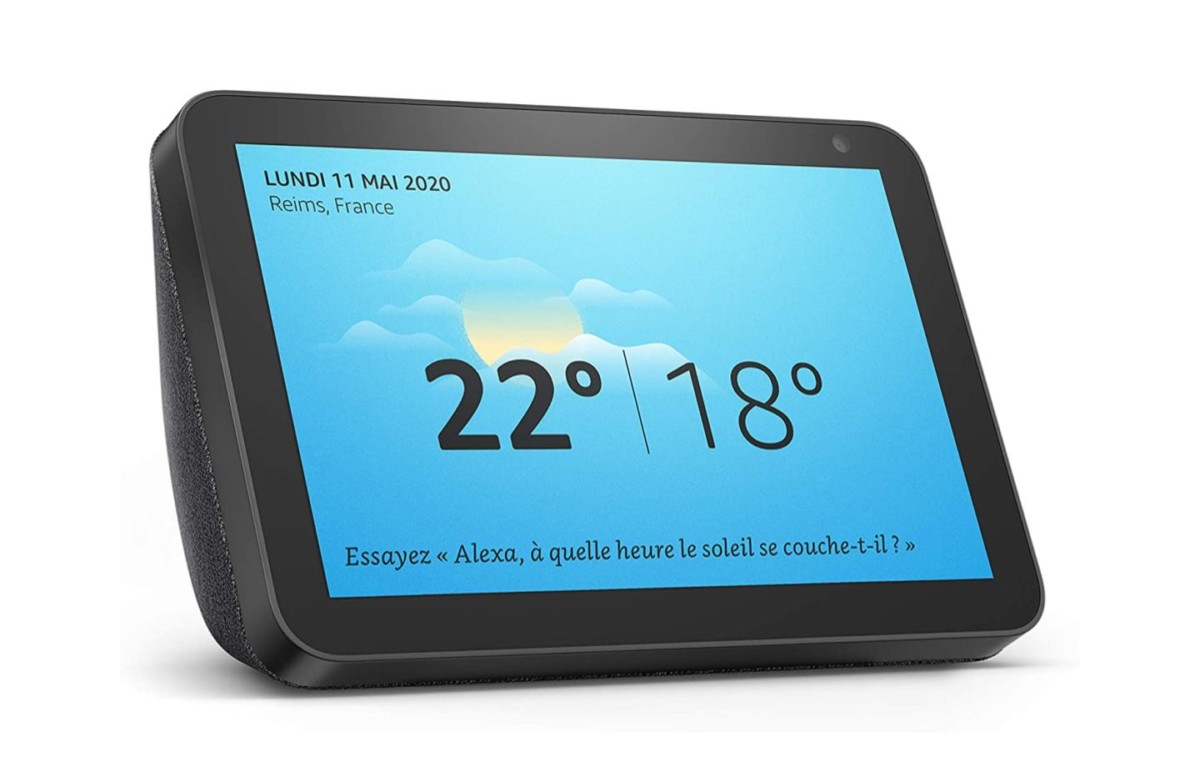 Smart Display Echo Show integrate Alexa and offer the same types of features that are already found on Amazon Echo (music, questions, skills, etc.). They also have the advantage of being equipped with a screen to be able to navigate on the interface and display visual information complementary to the requests requested. It is also possible to make video calls between different Amazon Echo Show devices, or through the Amazon Alexa app. Three models are now available in promotion: 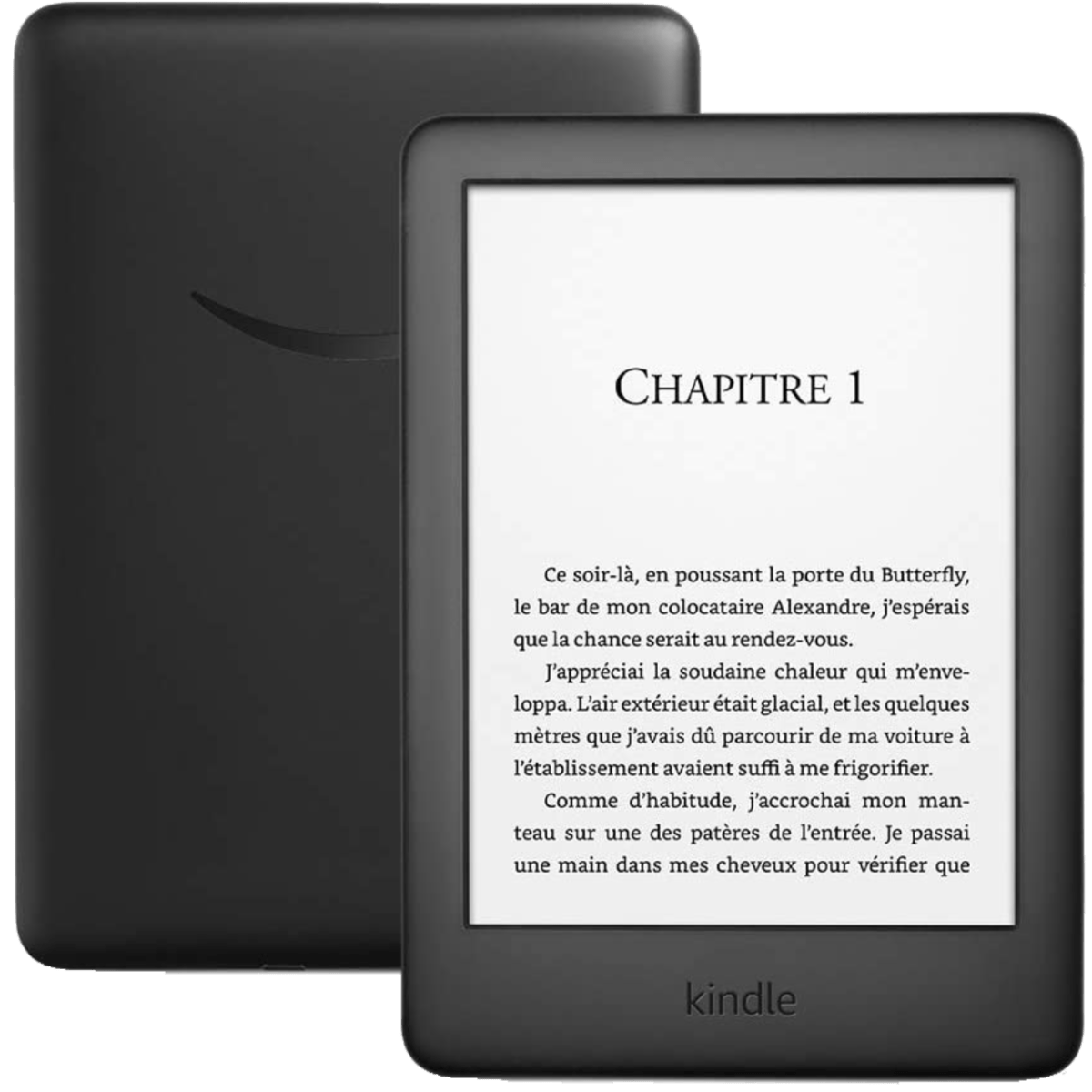 The classic 6-inch Kindle with a 167 ppi screen is the inexpensive version of Amazon e-readers. Ideal for beginners in the field, this e-reader focuses on the essentials. The software options are reduced to a minimum, but it will still remain very effective on a daily basis. In addition, a backlighting system was integrated in 2019; enough to read for hours, even in the dark, without tiring your eyes.

Amazon also offers a high-end 7-inch e-reader, with a resolution of 300 ppi. It has a wide border on the right side which makes it easier to hold. You can even use it in landscape format if you want. It is today the only Kindle to offer this possibility. The tenth iteration of the Kindle Oasis also offers as a main novelty the ability to adjust the temperature of the screen to warmer tones, especially in the evening. The backlight is more efficient than on other Kindle models thanks to 25 LEDs. Its intensity can be adjusted automatically according to the ambient light. Finally, it has a storage capacity of 8 or 32 GB to take all your favorite books with you. 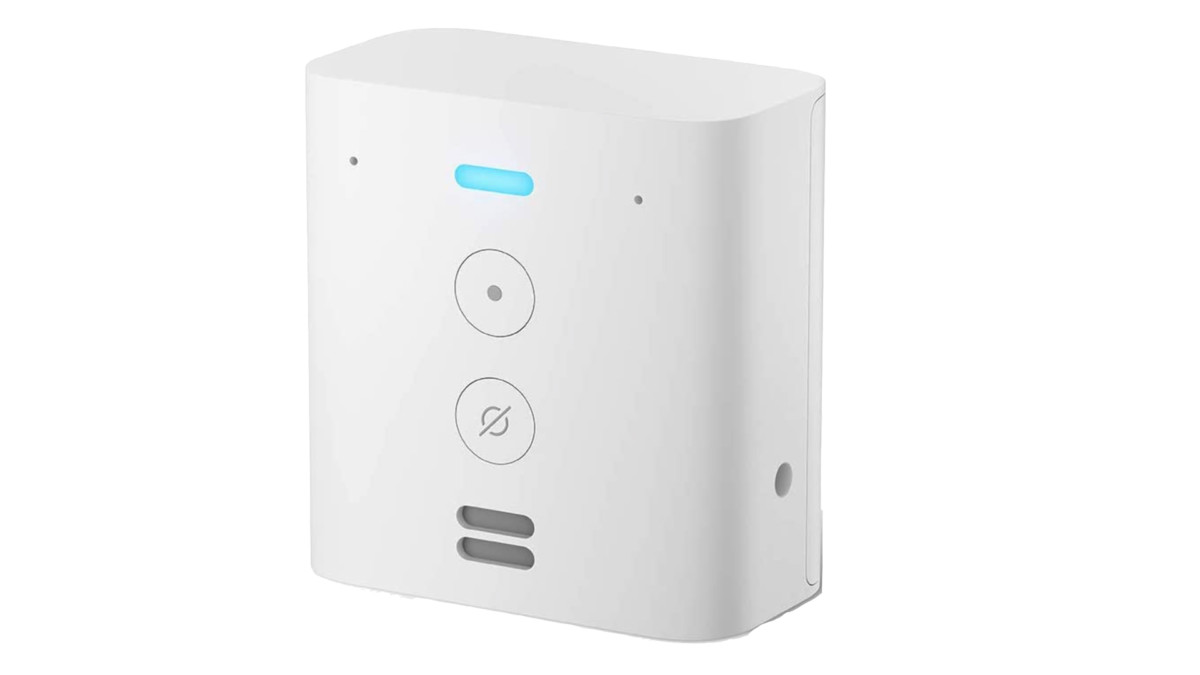 The Echo Flex smart plug is equipped with Alexa and simply plugs into a wall outlet. It allows for voice commands with audio feedback, which can be useful for starting timers or requesting voice information in a room where it may be difficult to install an Echo Dot, or if music functionality is not available. not necessary. It can connect to an external speaker in Bluetooth or in jack and has a USB port to be able to charge other peripherals.

As for the Echo Auto, it allows you to take advantage of the Alexa assistant in your car, connected via its jack port or connected via Bluetooth to a radio player and via USB for power. Connected to a smartphone for the 4G connection, it will allow you to perform voice commands to request music or radio stations from Alexa, as well as make calls only by voice.