At Amazon, there are the Echo speakers on one side and the Fire TV boxes on the other. Between the two is the Fire TV Cube which combines … both. We were able to test this very surprising little cube. 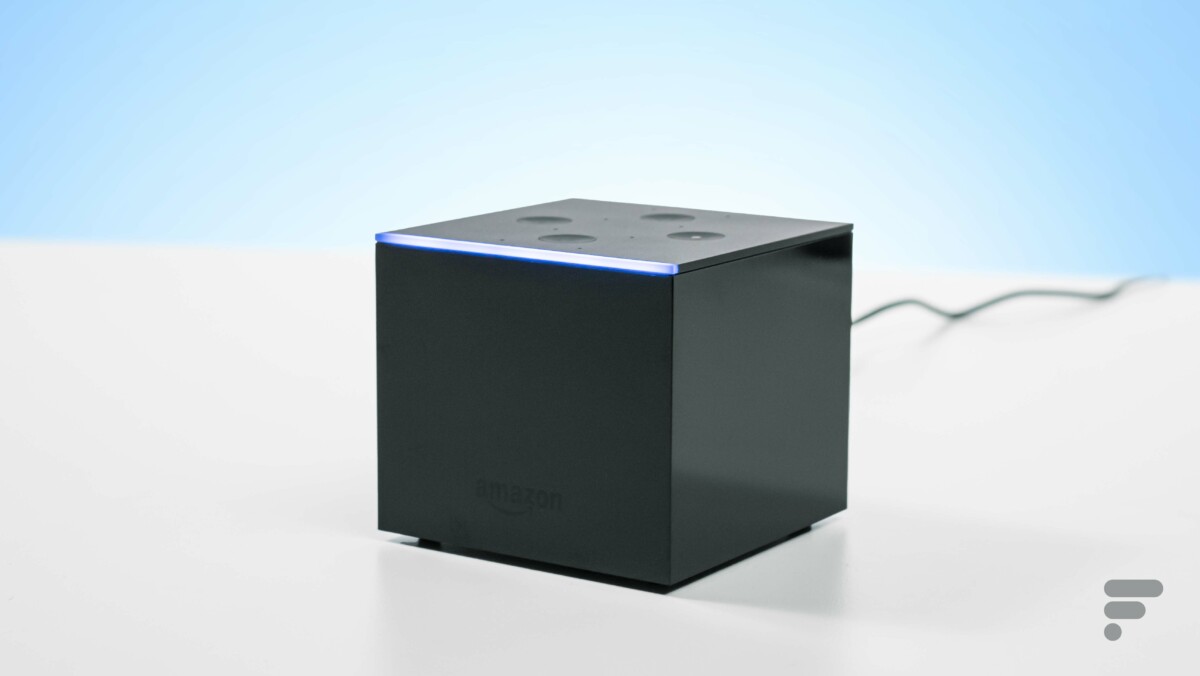 After the Fire TV Stick 4K test in 2019, here is the Fire TV Cube test. When I test a new product, people around me often ask me: ” What is that ? What’s the point ? “. The answer is not so easy to give with the Fire TV Cube. Basically, it’s a box sold at 119.99 euros, with microphones for Amazon’s Alexa voice assistant, you can launch videos through applications, listen to music and control the volume of your TV without ever touch a remote control. We could also summarize this product as a merger between an Echo speaker and a Fire TV Stick 4K.

The tested copy was provided to us by Amazon

This is the second iteration of this cube, but the first to officially set foot on French soil. This TV box is made of plastic and it is a cube which measures approximately 8.6 centimeters of edge. 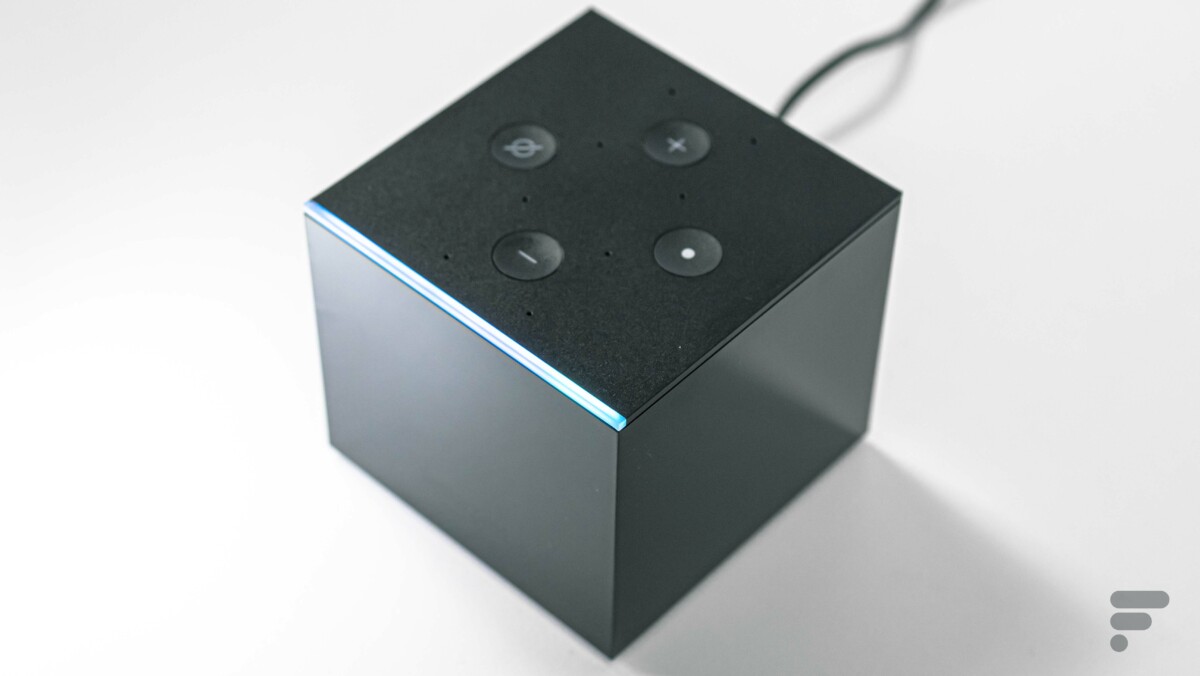 When you call Alexa, a light strip appears in blue on the front, indicating that it is listening to your voice command. This light strip displays yellow when the Cube cannot connect to a wireless network. On top of this black cube are the traditional physical buttons of the Echo speakers, to mute the microphones, change the volume and manually launch the Alexa assistant. 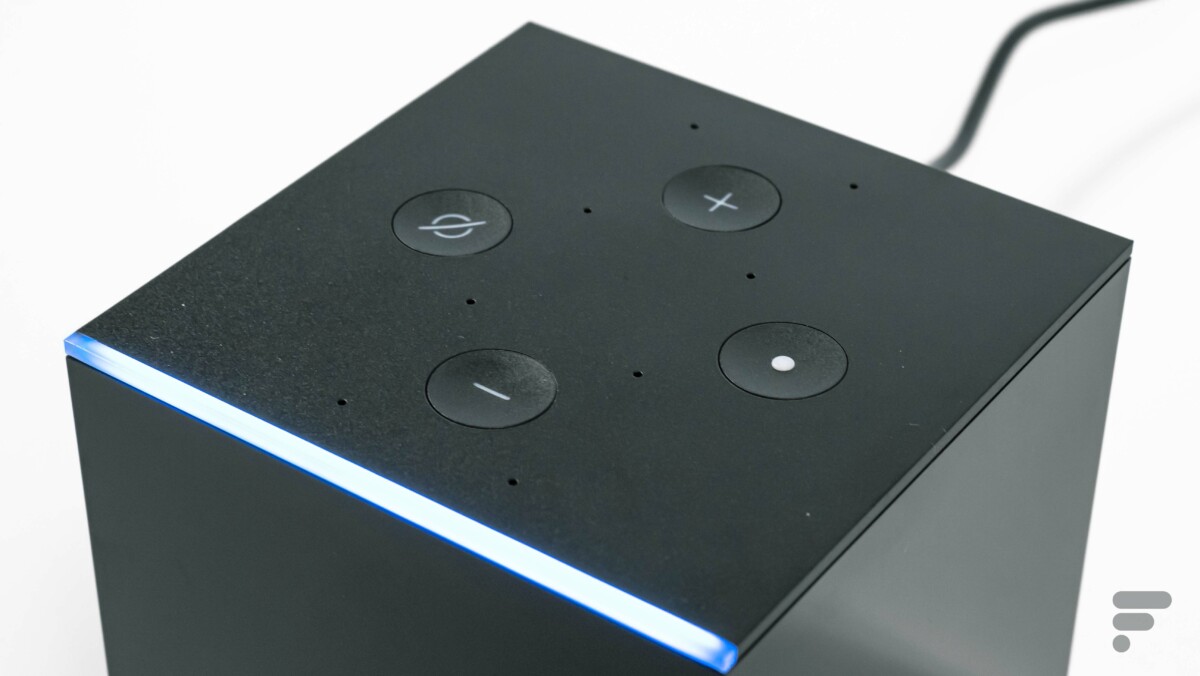 The Fire TV Cube connects to your TV using HDMI 2.0, so it can send a video stream in 4K definition at 60 fps. On the back, there are four connectors: HDMI, OTG-compatible micro-USB (to connect external accessories), a power socket and an infrared socket. The infrared socket allows the connection of an IR receiver supplied in the box. This infrared receiver is used to capture IR signals to control your entire system (such as a sound bar for example). 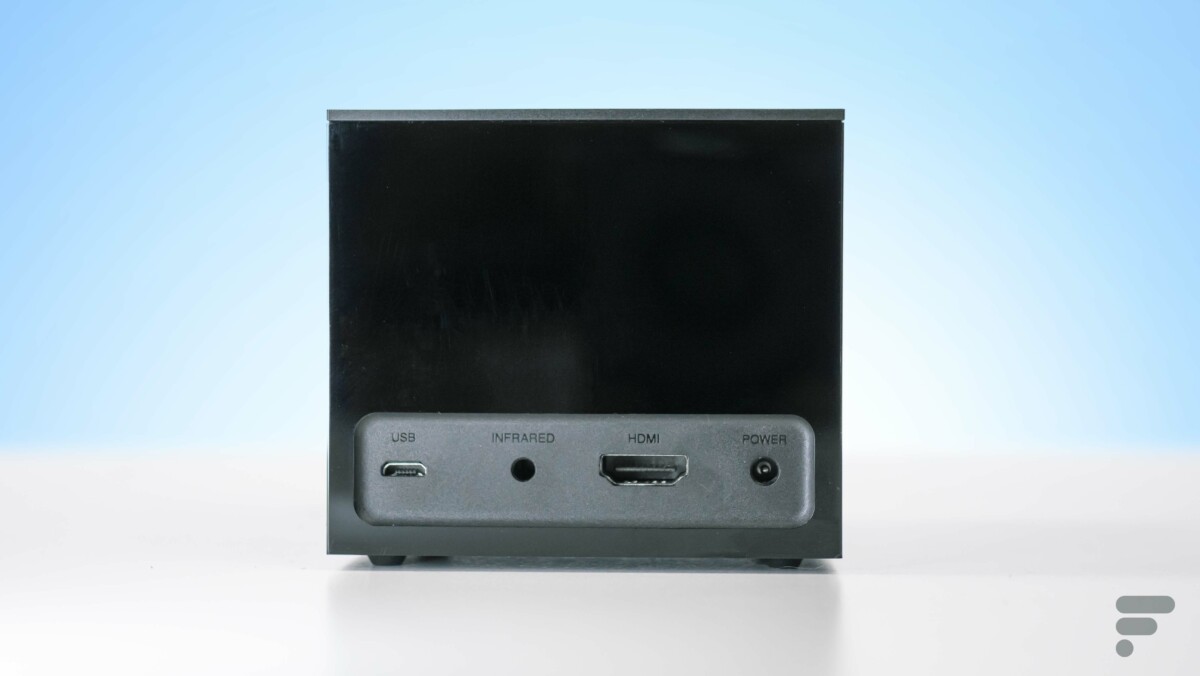 From a video performance perspective, there is no technical change from the Amazon Fire TV 4K. This is the same 6-core ARM chip with 2GB RAM, 16GB storage, HDR (Dolby Vision, HDR 10, HDR10 + and HLG) and Dolby Atmos support. This small cube therefore manages audio up to 7.1 surround. The interface is fluid, in terms of what a Shield TV can offer, often cited as the benchmark in this sector. No lag or slowdown observed, even on third-party applications. 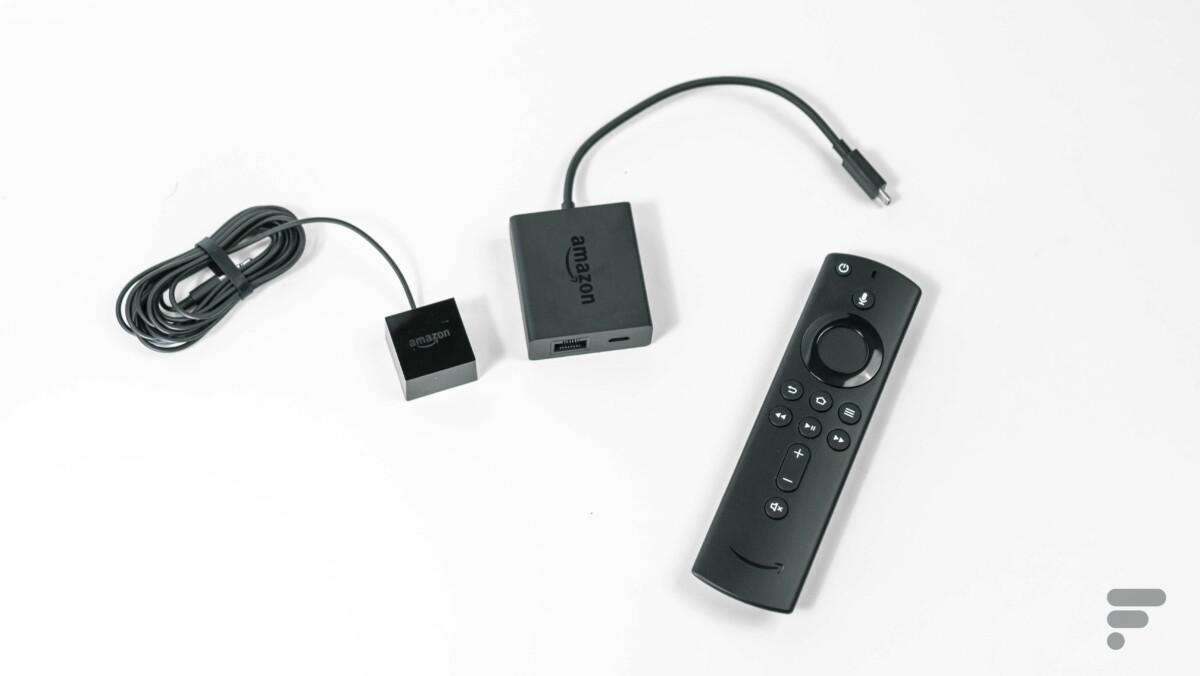 As for the wireless connection, it is provided by Wi-Fi 5 and Bluetooth 5.0 (to connect game controllers). You can also connect it in Ethernet (RJ45) via an adapter supplied which connects in micro USB. Finally, the remote control is very classic with physical buttons as well as a microphone to send voice commands to Alexa. 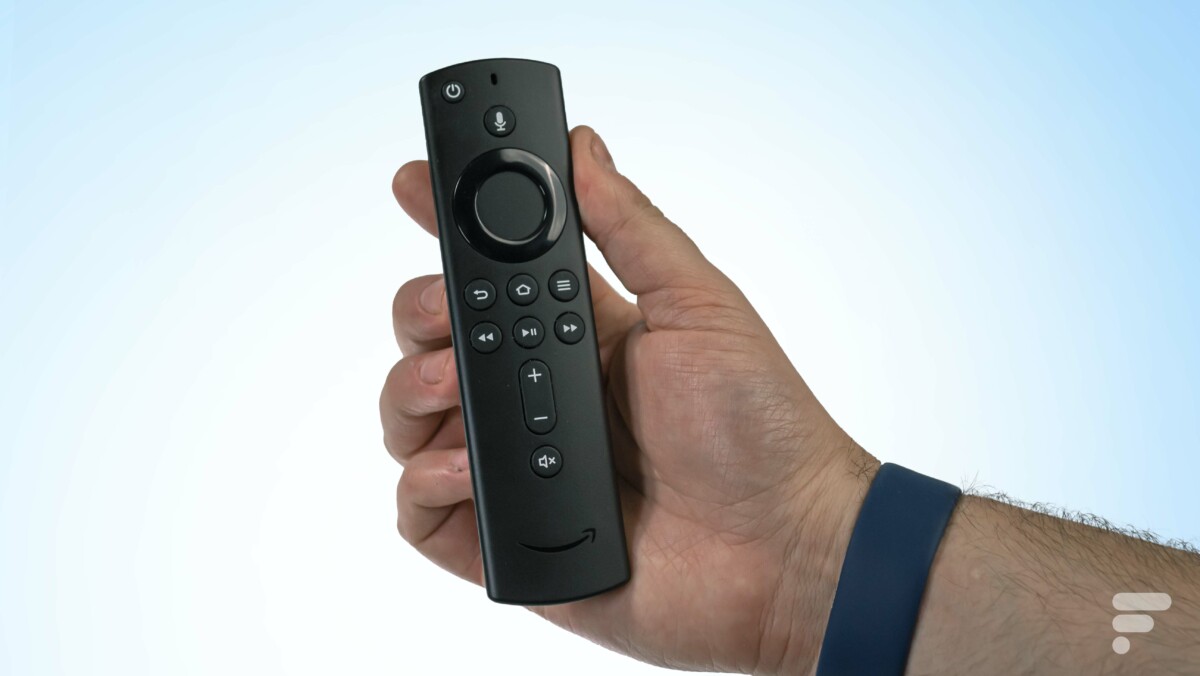 Alexa takes control of your TV with Alexa

This is the strength of the Fire TV Cube. With HDMI-CEC standard and the ability to handle IR signals, the Fire TV Cube allows you to completely control your TV via Alexa. From there, Alexa can launch apps, pause videos, and control TV functions like volume and power through the Cube’s built-in infrared emitters. Yes yes, the Cube allows you to simulate pressing the buttons on the remote control. It is also possible to control your sound bar or your Blu-ray player. 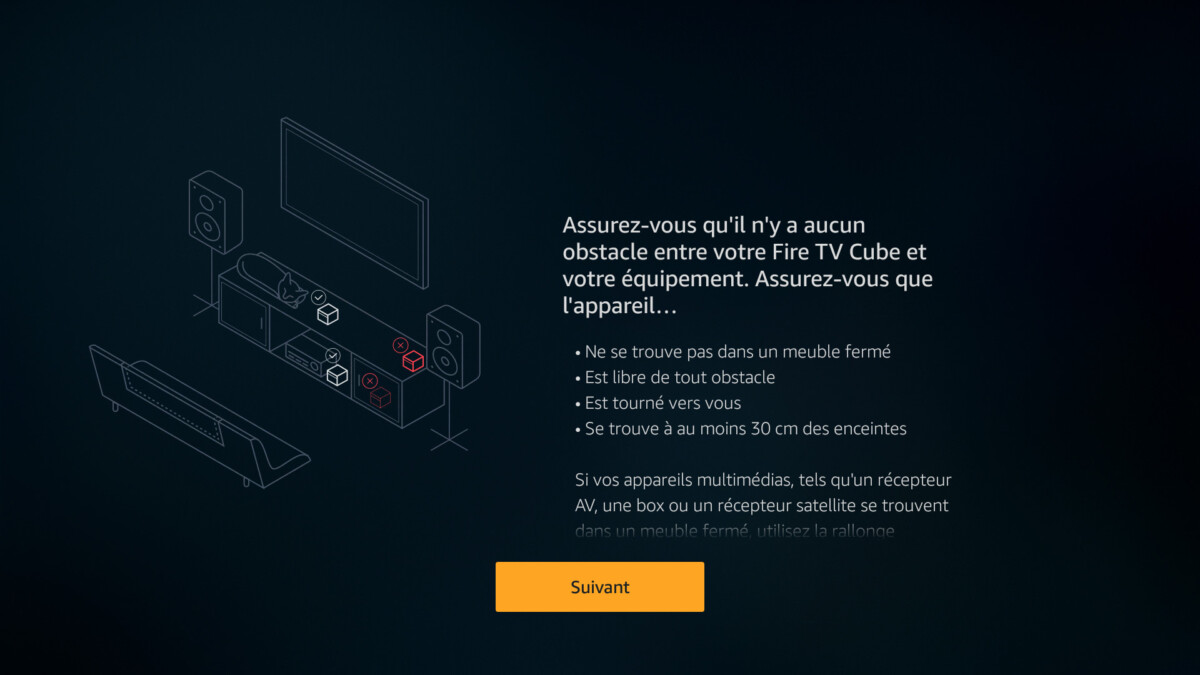 The configuration of your equipment is very simple, on all your products

You can also use the Cube as an Amazon Echo speaker to listen to music, listen to the weather forecast, check sports scores, search for TV programs… In addition, the Fire TV Cube can also control connected devices. In other words, it can replace an Echo Dot speaker that you would have placed next to your TV.

To capture your voice, Amazon uses 8 microphones. In addition, the box’s integrated chip takes care of a good part of the analysis calculations to speed up Alexa’s response time. In practice, it’s really a very efficient device that picks up voice commands very well and responds faster than a simple Echo Dot. If the built-in microphones are effective, it is less the case of the speaker (located under the cube). It’s at the level of an Echo Dot speaker, and again… it’s really for occasional use if you launch a few voice requests without needing to turn on your TV. Say otherwise: do not plan to listen to music with this speaker. 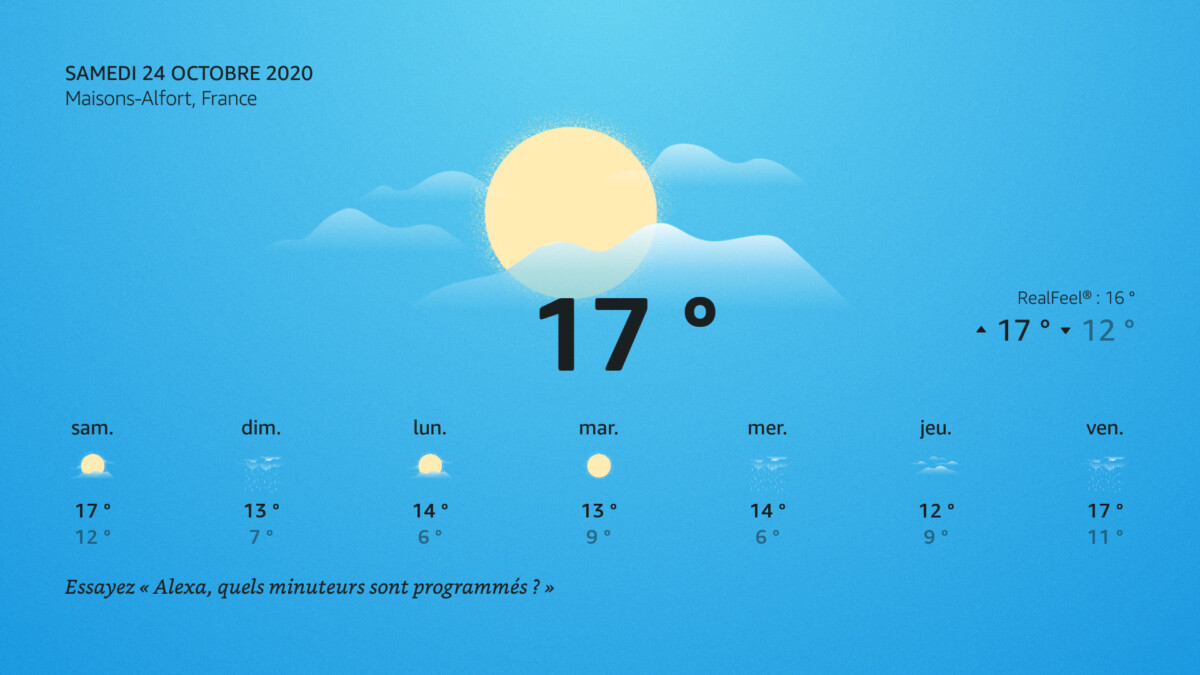 Some results are displayed directly on your TV

The Alexa functionality is very attractive with the ability to open an app, search for content or play music. That’s not all, you can also control your smart lights, view your camera’s video feed, or access other Alexa skills with a simple voice request. You can say “Alexa, show me 4K movies” and get a list of picks from Prime Video and Netflix.

That said, Amazon’s habit of placing its own content on the main home screen can get boring after a while. There is a line ” Netflix recommends ”which mixes content from different streaming apps to help balance things out. But sometimes you scroll through enough content … to realize that there is mostly Amazon content.

A bit too disorganized interface

The interface of Fire OS, the OS that equips this box is based on Android, is relatively simple for an interface designed for television. The content is displayed as thumbnails with side navigation. In short, it’s very similar to what Android TV offers for example.

So that is the first impression. Once you have configured your various apps, the layout becomes too disorganized. There is no way to hide or rearrange the recommendation lines, with often redundant content. Most often, I find myself asking Alexa to open the app I want and then control things with the remote from there. Despite these complaints, the Fire TV Cube interface is still relatively efficient most of the time. 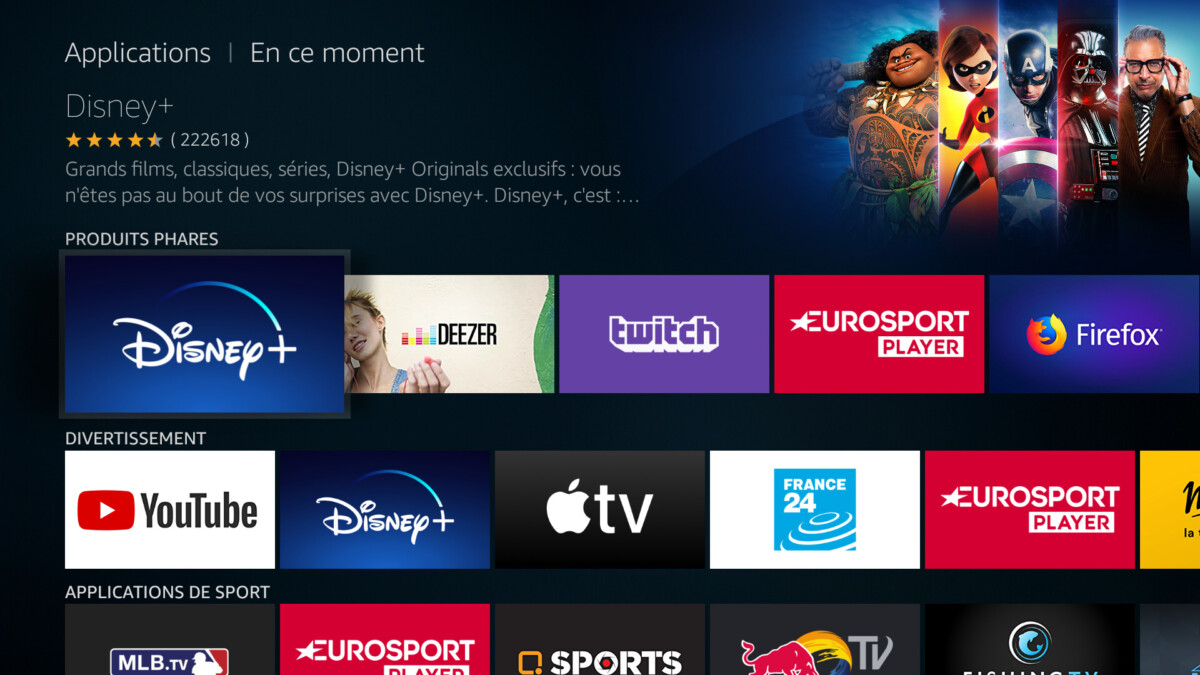 The Fire TV OS requires an Amazon account. It sounds obvious to you, but it’s important to mention it. You are completely in the Amazon ecosystem with Prime Music, Photos, Prime Video, but also with the Alexa assistant. Of course, you have access to other apps via the Amazon App Store application store, this gives you access to many applications including Apple TV +, Disney +, Netflix, YouTube, Molotov, Arte, Twitch … and even some games (like Asphalt 8) as well as web browsers (including Firefox). 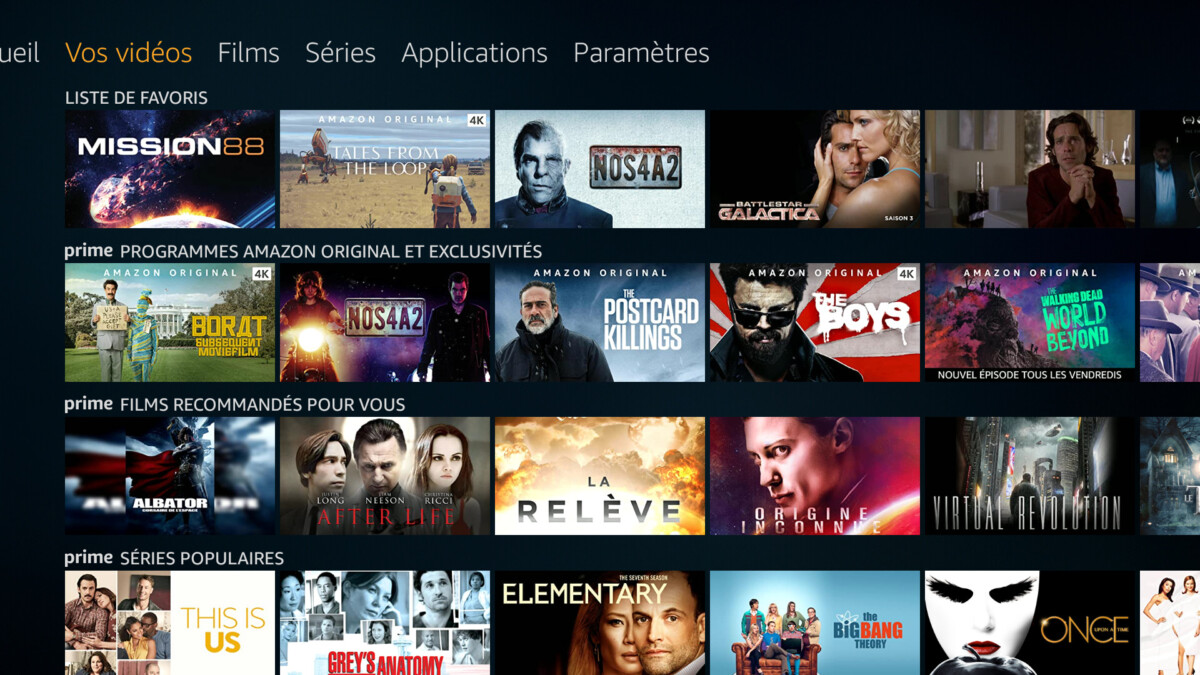 We noted the absence of popular apps in France such as MyCanal, Telefoot, but also DNA. You can still manually install these Android apps, however this still requires technical manipulation that is far from easy to access. There are no Chromecast functions, as it is not a Google product, however we have noticed the presence of a Cast function on some applications including the most popular including Netflix and Disney +. You can therefore stream some content from your smartphone, it’s practical. 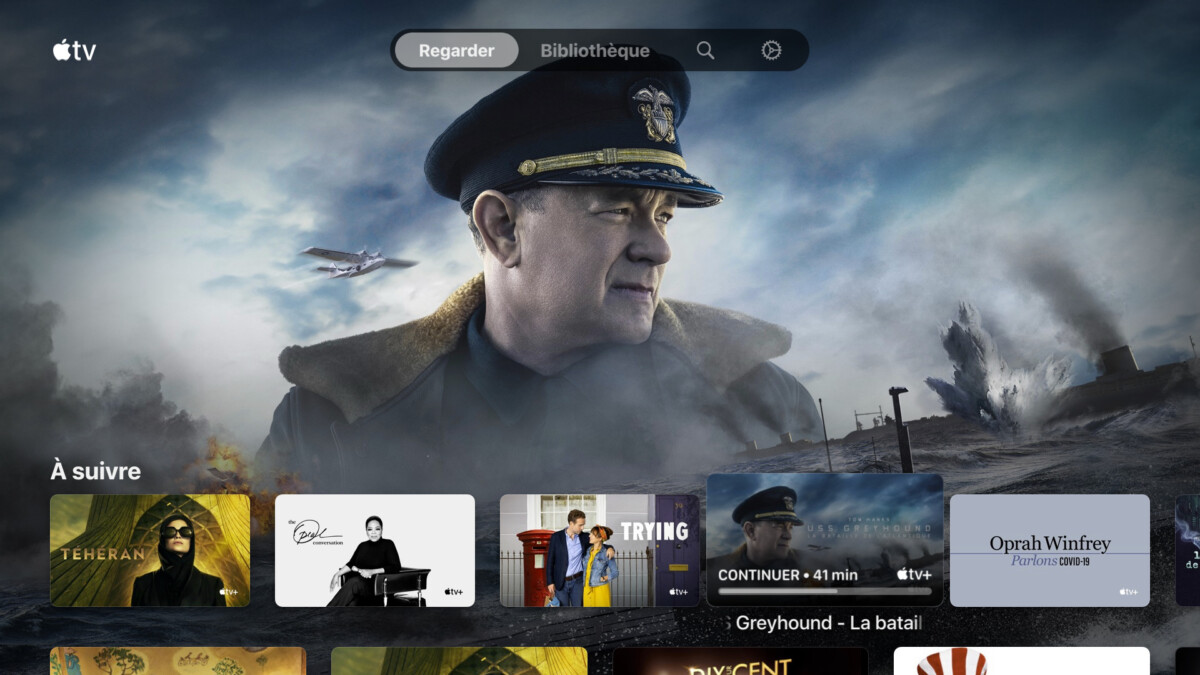 The Fire TV Cube is 120 euros on the Amazon site and at Boulanger.

The more interesting alternative is the Fire TV Stick 4K which costs half the price.

But you will find other alternatives, in our buying guide, equipped with Android TV (and Google TV), but also tvOS with Apple TV.