The Echo is Alexa’s most economical entry point into your home in the Amazon range. It is a small connected speaker which is now available in a fourth version with a new rounded design. 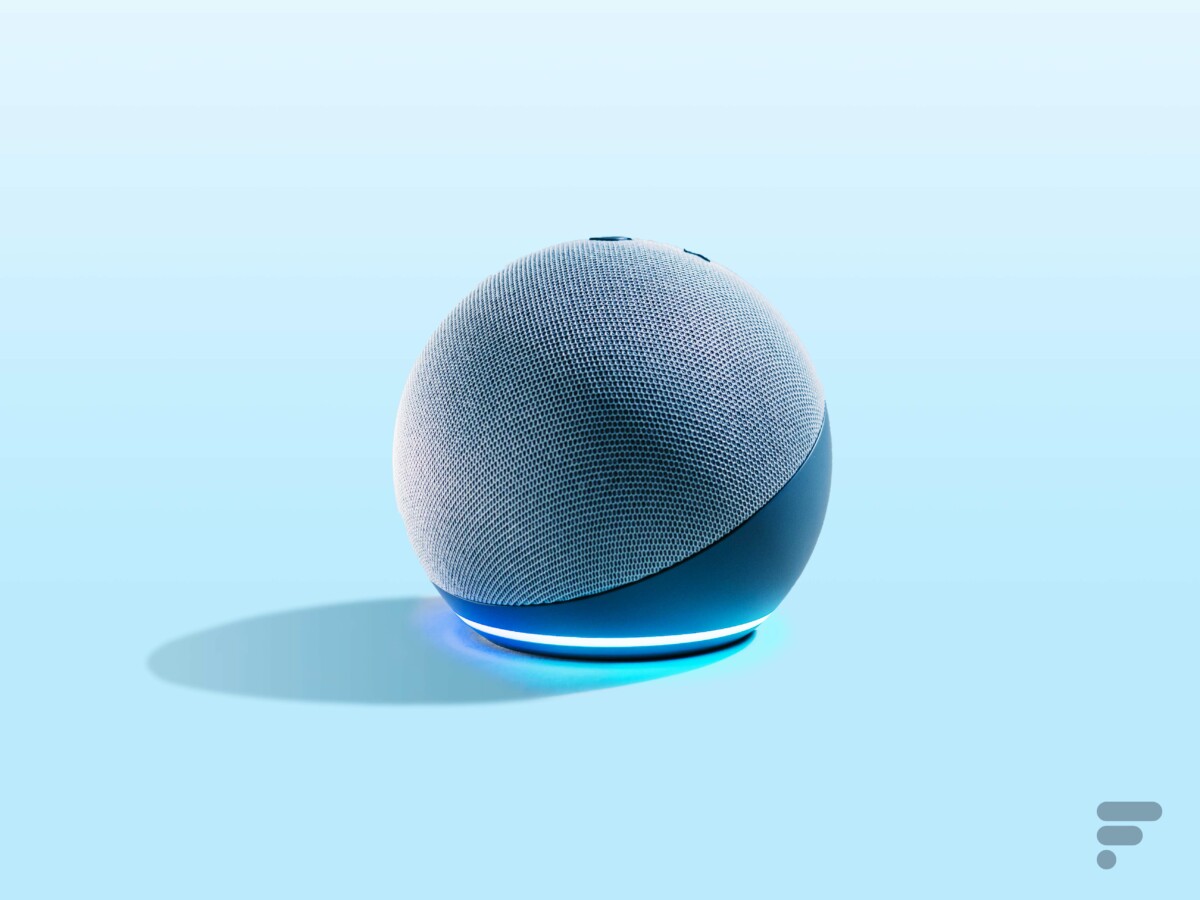 The Echo Dots has been renewed this year, it is the fourth version of the small connected speaker from Amazon. For this version, Amazon opted for a ball shape with a flat face. With its fabric covering, it will no longer go unnoticed. So should we fall for this fourth generation or rather move towards the third generation?

The tested copy was loaned to us by Amazon.

The Dot is easy to install, an Amazon account is required as well as the Amazon Alexa app that you will find on Android and iOS. 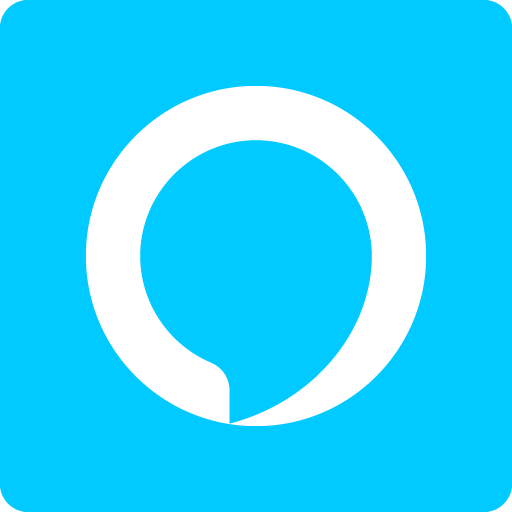 Once your Dot is plugged in, the speaker emits a blue color that turns orange if it cannot connect to Wi-Fi.

All you have to do is open the Amazon app. The speaker is recognized automatically and only three steps are necessary. You will need to configure the Wi-Fi connection and the recognition of your voice.

The fourth generation Dot incorporates a speaker equivalent to the 3rd generation Echo Dot, i.e. 41 mm (1.6 inch). The old Dot looked like a hockey puck. The new Dot is shaped like a ball with a flat side to prevent it from rolling. Half of the sphere is covered in fabric, with the lower hemisphere in matt plastic. Count about 10 centimeters in width and height. 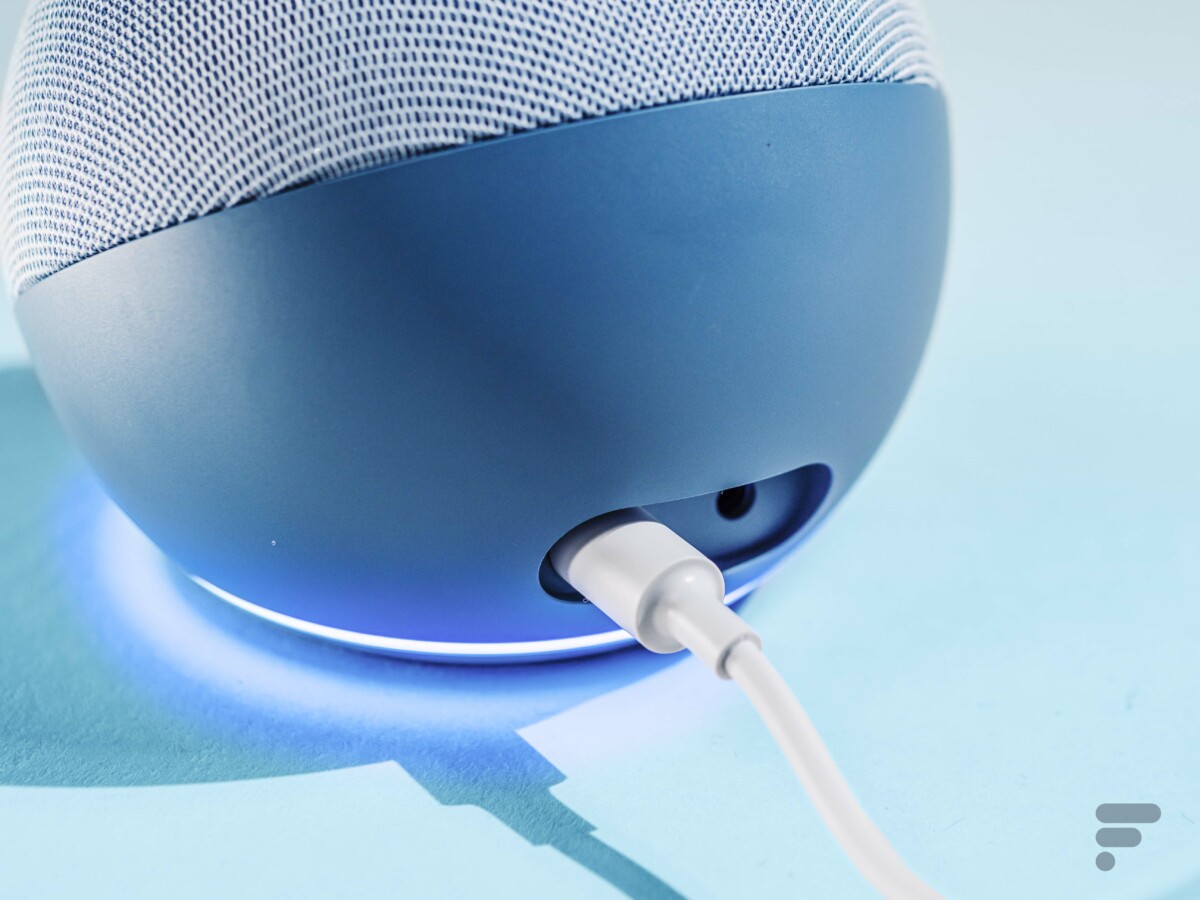 It is more aesthetically successful than the old Echo Dot but it is much less discreet. Its taller dimensions mean that it will have to find a suitable place in your home. Personally, I had hidden the Echo Dot in the TV cabinet… this is no longer possible with the new Echo Dot. It exists in three colors (dark gray, light gray and light blue). The only cable sold with is the power cable (15 Watts, proprietary plug) which is white, regardless of the color of the speaker you have chosen.

We find the famous light ring on the lower part which lights up when Alexa listens to you. This LED ring was on the top of the previous model. In practice, this is not a significant change. The LED is also reflected on the surface on which the speaker is placed. 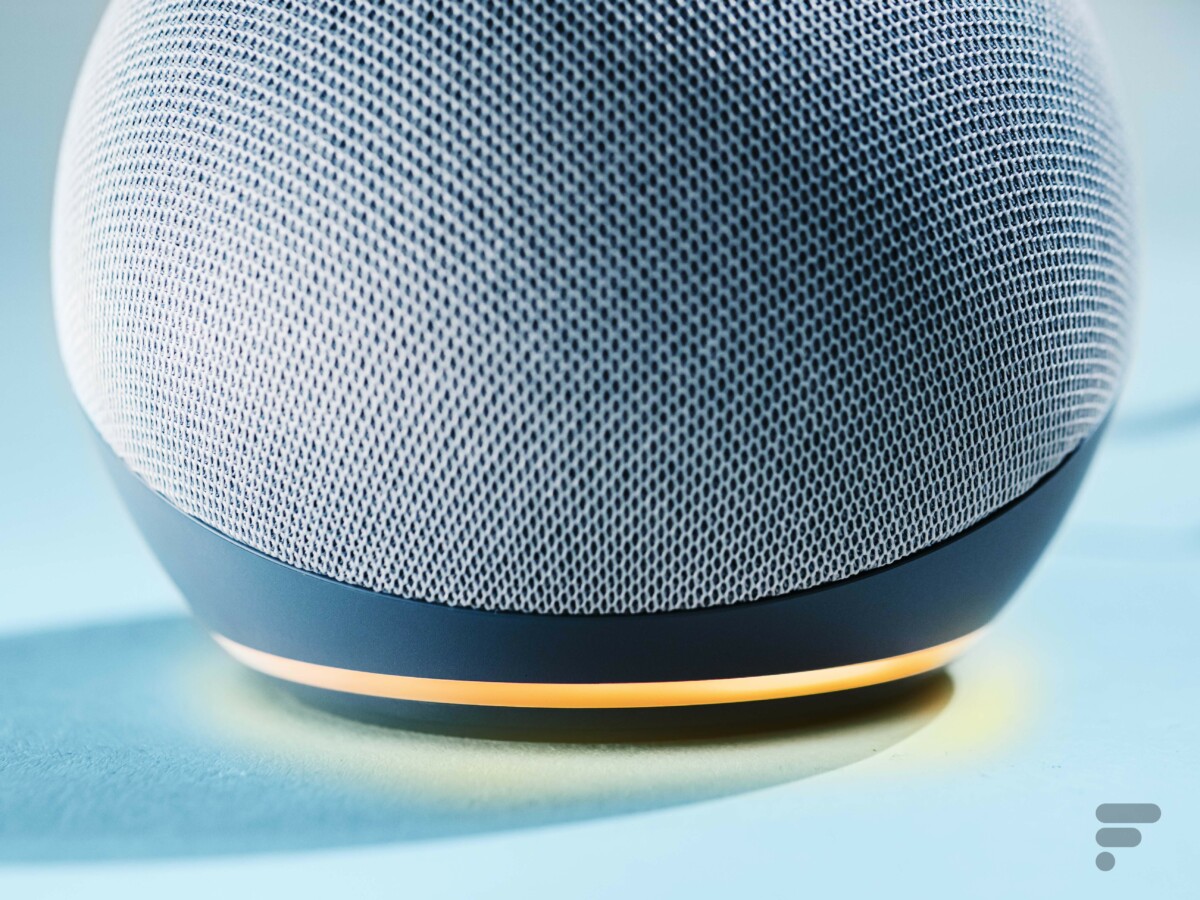 On the top, you’ll find the physical buttons to adjust the volume and launch Alexa without having to call her. Finally, you also have the speaker mute button: it simply mutes Alexa.

This new Dot features (you have it ?) a 3.5 mm mini-jack (audio output) which will allow you to connect it to an unconnected speaker. This option allows you to connect a home cinema kit or a speaker kit that is not connected… to the Internet. You will be able to take advantage of the Alexa assistant but also music streaming services like Spotify for example. For information, the Echo, the largest speaker, has a 3.5mm audio input AND output. 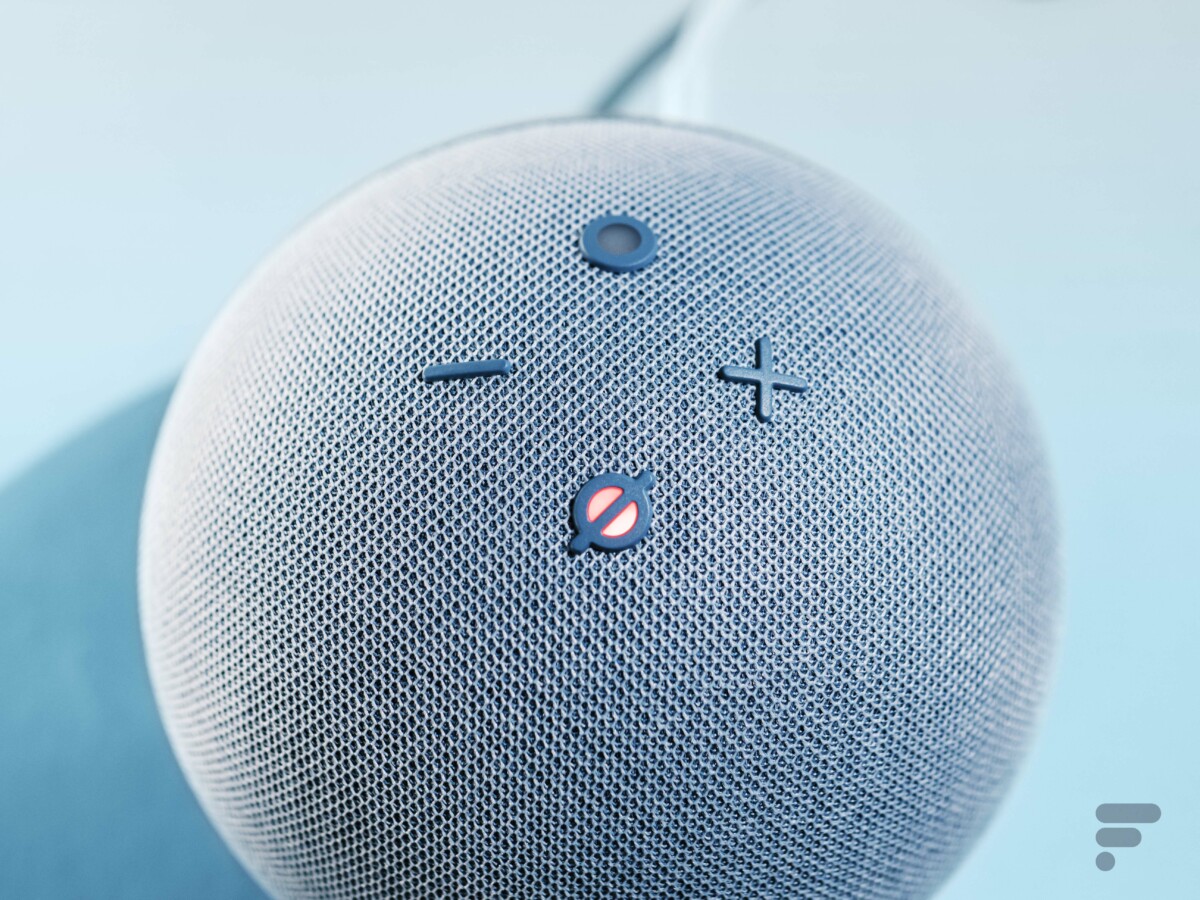 The Echo Dot is also Bluetooth enabled with support for the Advanced Audio Distribution Profile (A2DP). You can therefore stream content from your smartphone to the Echo Dot via Bluetooth, in addition to the Wi-Fi connection.

What is the Echo Dot for?

Slipped into your home under the cover of a speaker, the Echo has become one of the best ways to control connected devices in the home, such as lights, thermostats, locks, cameras, and more. Everything is controllable with your voice thanks to the voice interface named Alexa.

Turns out it’s a lot easier to turn your lights on or off with a voice command than it is to pick up your smartphone, unlock it, launch an app, and press a button. 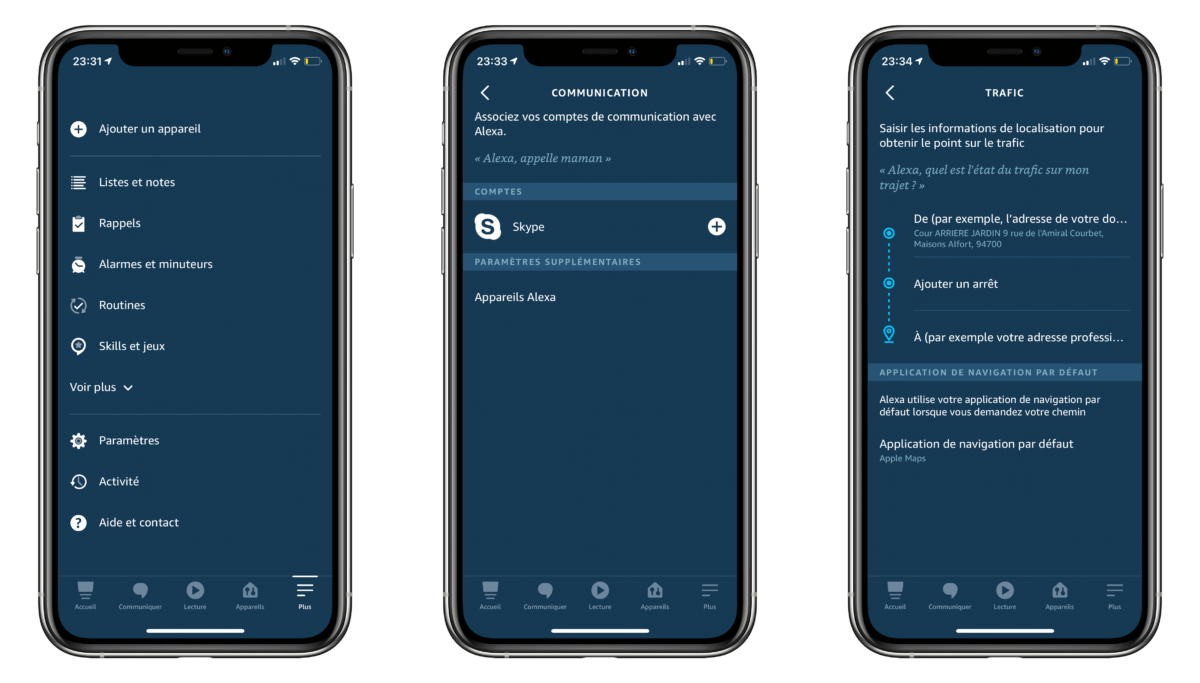 The Echo also lets you set alarms, timers, keep up to date with the news, and yes, buy things from Amazon with simple voice commands. And its smart speaker capabilities are also extended with support for Deezer, Apple Music, Amazon Music, Tunein, Spotify and many more services. As a result, the Echo quickly became one of Amazon’s best-selling products, even more popular than its line of Kindle e-readers.

The Echo Dot is the miniature version of the Echo, half the price and two times less powerful. This is often the speaker you will often find in a pack with Philips Hue bulbs and a cost-effective way to connect new rooms in your home. There is also an identical version with an integrated visual clock. Convenient to turn it into a connected alarm clock. 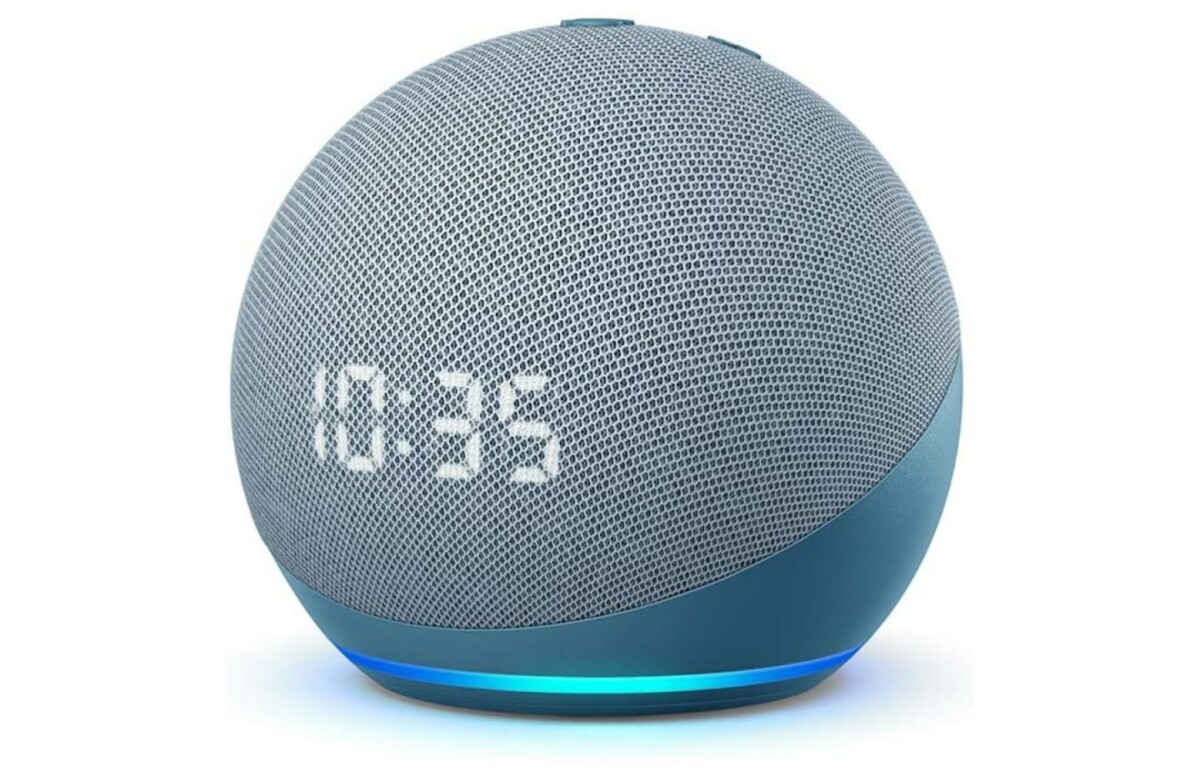 Routines are very practical, they allow you to automate a series of personalized actions using a specific voice command. By default, the Alexa app offers you to activate the famous ” Alexa, good night… ”, Which turns off the connected light bulbs and wishes you a good night. You can very well set up a routine by integrating connected objects, a service or even an action (such as sending a message).

You will also find hundreds of skills, some useful and some very gimmicky. Alexa has the advantage of having a very large ecosystem. Just for the connected home, you will find the main ecosystems and products: Enki, Smart Life, TP-Link Kasa, Netatmo, Eufy, Dyson, Xiaomi, Realme, Samsung SmartThings, Philips Hue, iRobot, Razer, tado … the list is very long.

The media also played the game: FranceInfo, France 24, Brut… unfortunately the good ones skills are not the norm, it will be necessary to sort the selection from Amazon. Note that it is possible, for example, to make Skype calls or call / write to other Amazon Echo users. If you have a large house, the “Drop in” feature allows you to talk to someone in another room.

The performance of the Echo Dot 2020

Technically, the Echo Dot uses the same 1.6-inch speaker as the 3rd gen Echo Dot. It’s a relatively loud speaker for its size, but insufficient for listening to music in your living room as the main speaker. We do not recommend this speaker if you want to listen to music with it. Instead, use the Echo Dot’s audio output to connect an external audio system.

The sound quality is theoretically similar to the 3rd generation model, with this speaker the same size, but our impression is nevertheless positive when we compare the two speakers. This is explained, in our opinion, by the new dome-shaped design. The sound quality sounds better, the vocals are clearer and it seems less saturated when you turn up the volume.

To compare, the sound coming out of the Echo Dot 2020 is a bit better than the speakers of a good smartphone. The maximum volume is higher but the sound performance is not much better.

Be aware that you can pair two Echo Dots in a stereo setup just like before, but you can’t do that with multiple generations – you have to buy two 4th gen models for a stereo setup. You can still group Echo speakers together, regardless of generation and model, but without a stereo setup. They will just be monophonic reproductions.

Regarding voice capture, it is omnidirectional. So you can talk to your Echo Dot in 360 degrees. It’s easier to install it in a room. We found the microphones to performeven when the TV is turned on in the same room with high sound. The processing time seems to have decreased, the Echo Dot 2020 is more responsive.

Alternatives to the Echo Dot 2020

The first alternative is the 3rd generation Echo Dot, still on sale. Its functions and performance are very similar for a lower price.

If it’s the audio quality that matters, prefer the Echo. More expensive (99 euros) but much more powerful and with much higher audio quality.

You will then find the Nest Mini, the equivalent of the Echo Dot at Google (and therefore with Google Assistant).

There is a version with a clock in the form of an LED. The rest is exactly the same as the Echo Dot 2020, for 10 euros more.