Are you looking for a high-performance and inexpensive gaming headset? The Roccat Elo 7.1 USB might just meet your needs. We tell you everything in our full test of the brand’s new mid-range model! 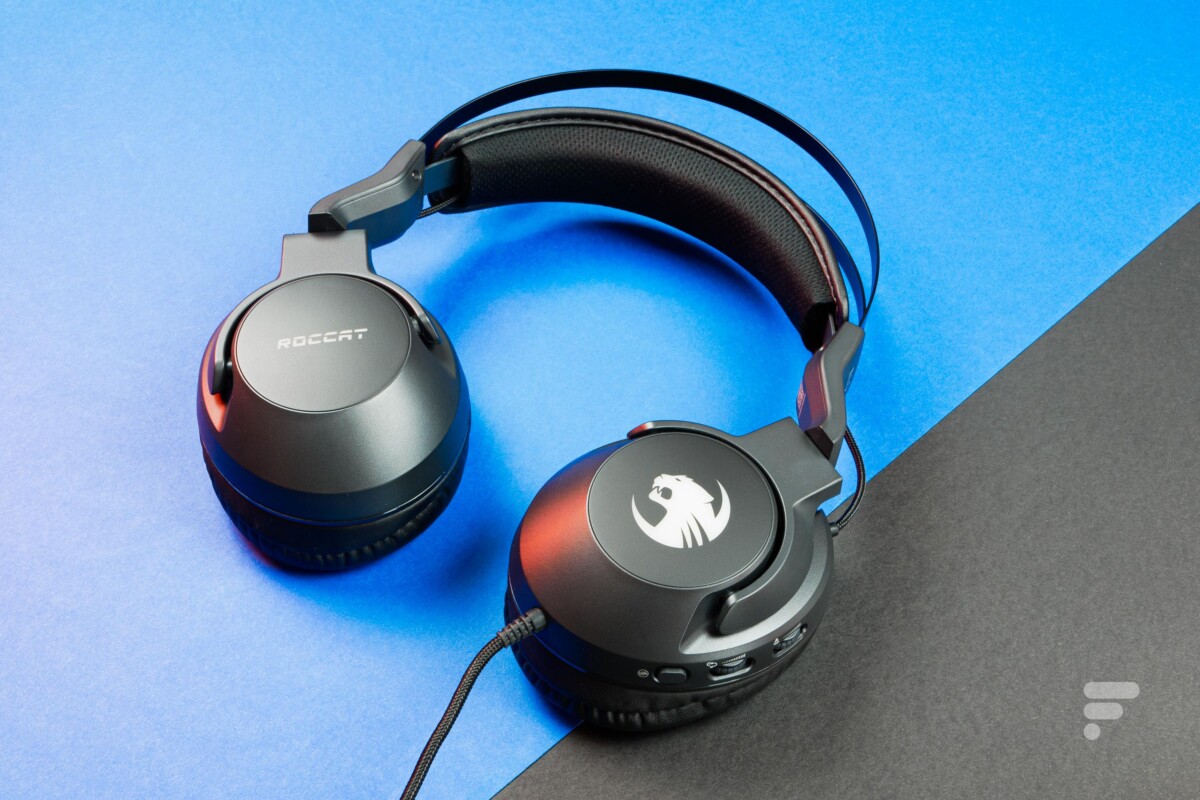 When Roccat renews their range of helmets gamer, they don’t do it halfway. Indeed, there are no less than 3 different helmets that have been presented in recent weeks. Today we invite you to discover the model that seems to us the most interesting: the Roccat Elo 7.1 USB.

As its name suggests, this gamer headset is connected via USB and also offers 7.1 virtual spatialization, to improve immersion. Like the rest of the range, it has a new hanging hoop and several cool features.

When you take the Roccat Elo 7.1 headset out of its box, its lightness is immediately noticeable. The helmet does not exceed the 374 grams and should therefore logically be comfortable once installed at the top of our head. Especially since it seems clear that Roccat aimed at comfort above all to build this new model. 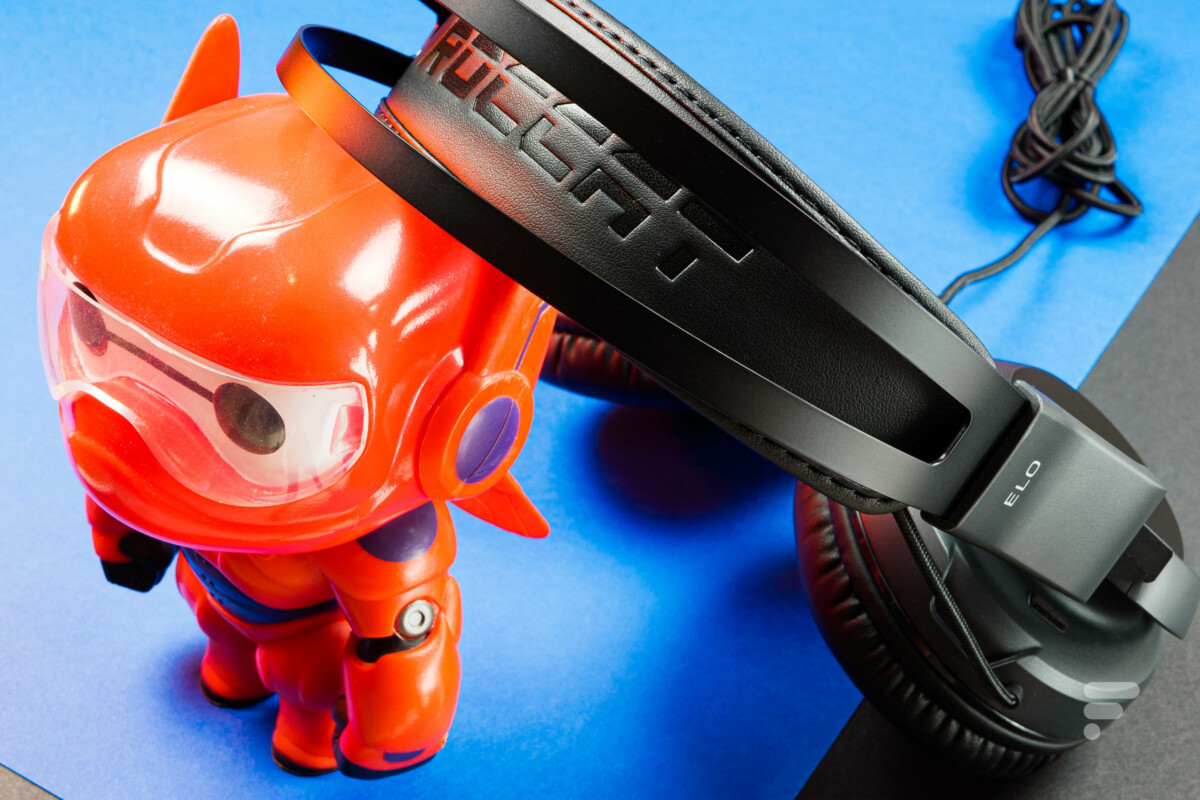 Indeed, the helmet has a hanging hoop, previously found mainly on the Siberia and Arctis models from SteelSeries. This arch is articulated around a first structure in fine metal which ensures the junction between the two atria. A second flexible plastic hoop, covered with foam and imitation leather, ensures the connection with the skull to correctly distribute the weight and above all to adjust perfectly to the morphology of each person.

As a result, there is no size adjustment at the level of the hoop since it adapts naturally thanks to an elastic system. Despite this, the Roccat Elo 7.1 USB adapts perfectly to large skulls and will therefore convince the vast majority of users.

Going down along the structure covered with hard plastic not really qualitative, we will appreciate the presence of a joint allowing the 90 ° ear cups pivot. The helmet can thus rest on the top of the pectorals without hindering head movements when not in use. A small ergonomic bonus that we would like to see generalize among all manufacturers.

The two atria are also mounted on a rather classic articulated system to be able to correctly follow the curves of the user’s head. We will also note that foams, which completely encompass the ears and are covered with imitation leather, offer a slightly thicker lower part, to better hug the lower face. Note all the same that we did not notice a huge difference with conventional earbuds.

Due to its USB connection, the Roccat Elo 7.1 USB benefits from a configurable RGB lighting located on the back of the ear cups and which illuminates the two logos present on them. Completely gadget since out of the user’s field of vision, this lighting can be personalized using the Roccat Swarm software which we are talking about a little further on.

If the right atrium is content to broadcast sound, the right receives multiple buttons as well as the headset connections. In particular, there are two adjustment knobs allowing independent management of the output volume of the system as well as the level of the audio return of the integrated microphone. Finally, a button to cut the latter is also in the game. The whole is rather accessible and can therefore be reached without special effort.

It is therefore on this same headset that we install the small removable boom microphone. As often, we have here a small shape memory pole which turns out to be long enough to place the microphone correctly at mouth level. No windshield is provided, so pay attention to sound tests to check if the microphone is not too sensitive to breath. 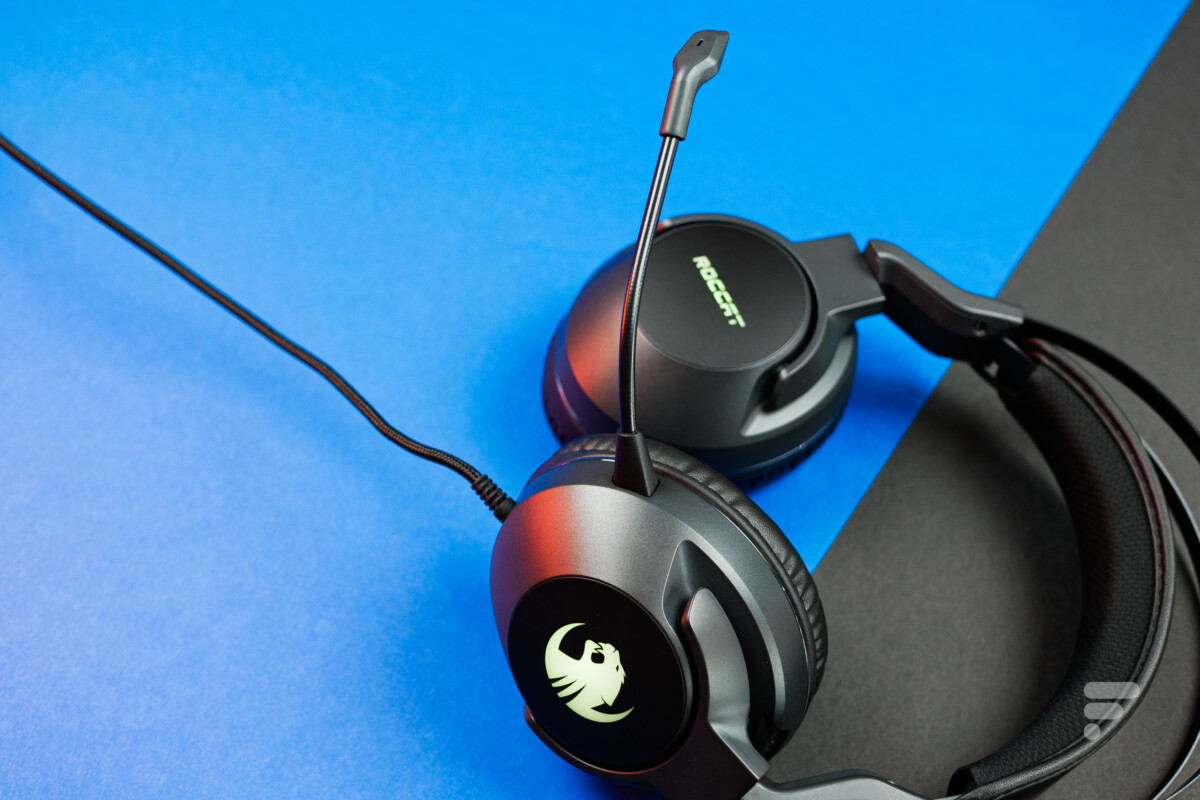 The microphone and its shape memory pole // Gamesdone: Edouard Patout for Frandroid

Finally, the headset will only connect via USB to our machine. The integrated, braided cable measures no less than 2.5 meters, allowing it to run neatly behind or under the desk. We regret on the other hand that the friction noises of the latter are transmitted a little too easily and quite audibly in the atria. Pity. Note that with this unique connectivity, the Roccat Elo, 7.1 USB will not be not compatible with home consoles. 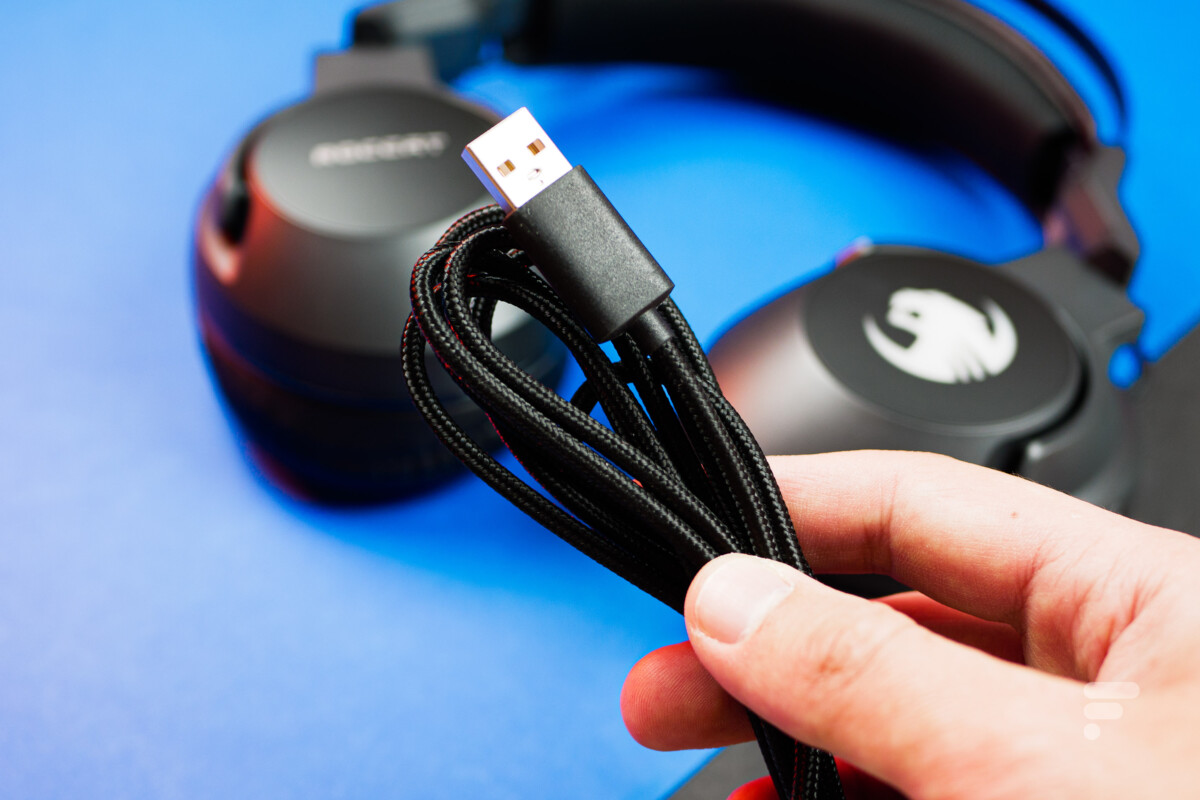 In terms of comfort, we have no complaints. The helmet adapts perfectly to the contours of the skull, stays in place and does not overuse the skull. It can therefore be used without difficulty for several hours. Note that as a wearer of glasses, I did not feel any discomfort with the atria.

In the end, despite some small flaws, this new Roccat helmet offers a successful and light design. The emphasis has, it seems, been placed on comfort and it is a successful bet for the brand. We regret the use of questionable quality plastics which slightly tarnish the rest of the design. Despite this, the whole exudes solidity and no cracking can be heard.

Roccat Swarm, the (too) complete pilot to customize the helmet

As always, we are moving towards the Roccat Swarm software to manage all aspects related to the Elo 7.1 USB. All the settings of the helmet are grouped in one and the same step, a little too much in our opinion. A second tab is dedicated to lighting effects, but we will not expand too much on the subject, the interest being very limited.

The first configuration block offers a full equalizer as well as various presets for certain types of game in particular. We can also customize the sampling rate used by the headphones and activate some features to improve voices, compressed sounds and bass. It’s hard to know what these “improvements” really do and we tend to leave the default settings in place anyway. 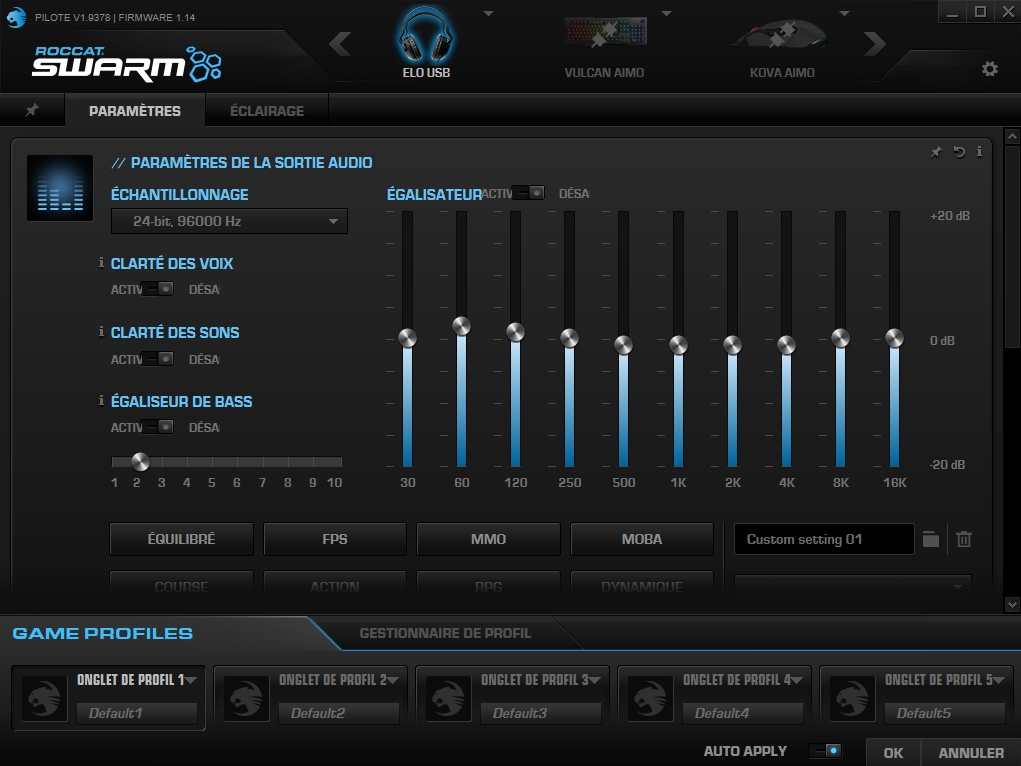 Roccat also offers 7.1 spatialization (it’s normal, it’s in the name of the product) which can be activated in one click, within the pilot. Two presets are available, but we have a preference for the “Clarity” mode which we will come back to in the next part.

Finally, the last interesting part of the pilot focuses on the microphone and its different options with in particular the possibility of activating a noise reduction whose capacities we will check in the next part. The microphone sensitivity can also be adjusted and voice changes can be applied to (maybe) make your friends on Discord laugh. 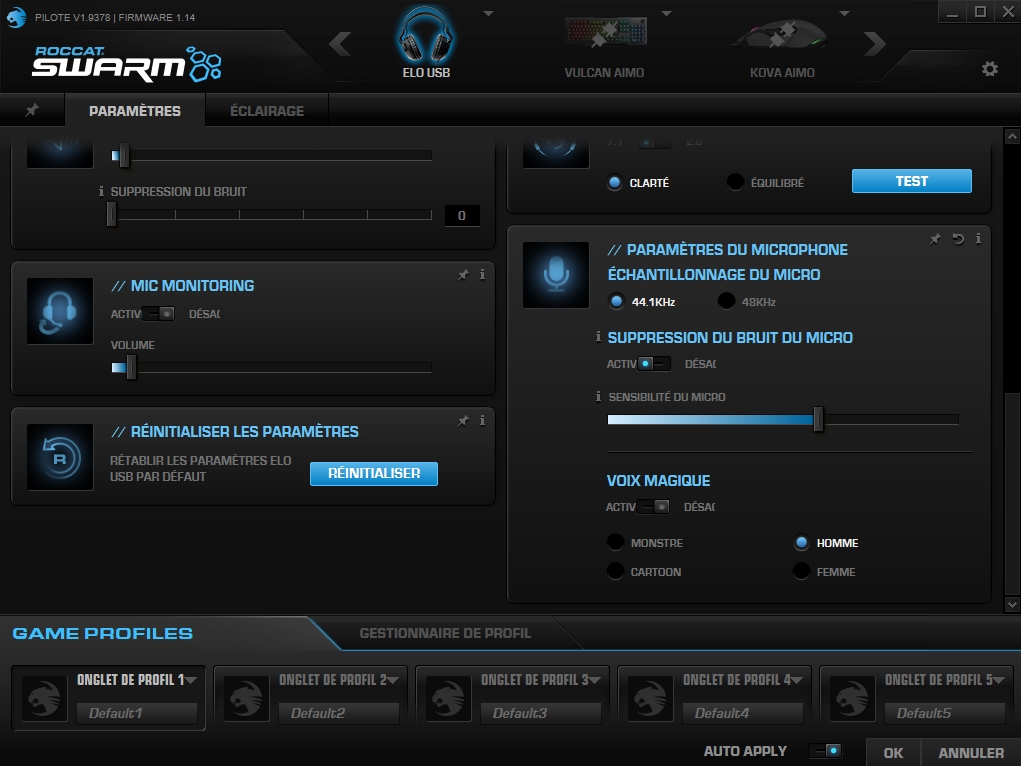 All the other settings on this page seem superfluous, or even totally useless, since most of them are already present in Windows. The only potential interest will be to have the possibility of personalizing them via the Swarm profiles.

Indeed, as always, the settings will be saved in profiles to be associated with games or applications in order to adapt the settings of your peripherals to each use. For example, you can associate a specific equalizer with one game and activate 7.1 spatialization for another.

Roccat has equipped its Elo 7.1 USB with 50mm transducers, in the current market standard. We put them to the test on several music listening sessions of different styles as well as on a few shooting games to verify the performance of its virtual 7.1 spatialization.

When listening to music, with the headphones defined in stereo profile, we enjoy a rather rich and enveloping sound. The whole is well balanced without particular predominance of low frequencies, which is not to displease us. We regret a slight lack of definition on some songs a little more complex as well as a very slight lack of roundness and naturalness on the bass frequencies. 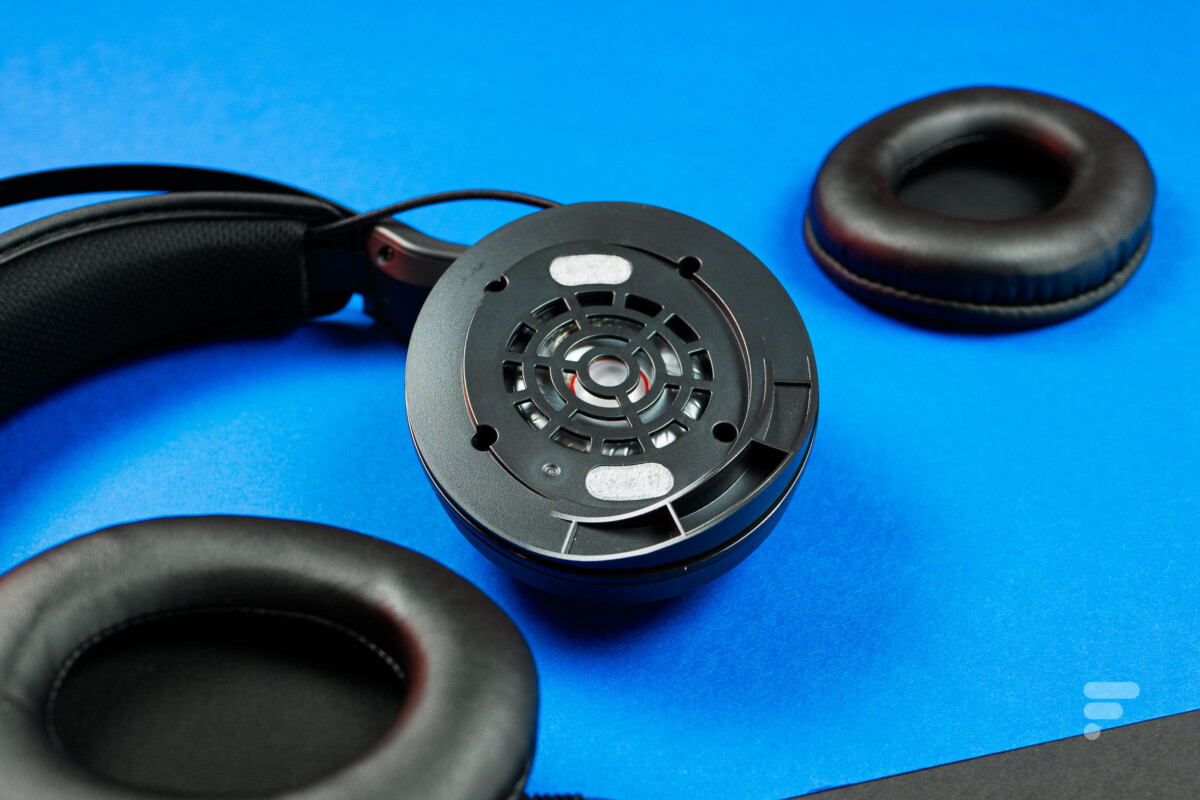 The helmet is equipped with a 50mm transducer // Gamesdone: Edouard Patout for Frandroid

In play, the good stereophony of the headphones allows a fairly effective localization of the origin of the sounds. Enabling 7.1 spatialization will not necessarily increase the accuracy of this location, but the immersion is clearly better. We appreciate here the fact that Roccat offers a surround sound with fairly light processing which allows not to distort the sound too much, while (virtually) widening the soundstage. The two available modes differ in the level of the central voice which is boosted in “Clarity” mode. The choice will be made according to tastes and situations.

In short, the Roccat Elo 7.1 USB offers an overall convincing performance that will adapt perfectly to use. gaming for which it was designed. Note that the volume of the headphones is particularly high. In our tests, we did not exceed 20% sound level on Windows to remain in acceptable listening conditions. Finally, the sound insulation would have benefited from being a little more pronounced since the ambient sounds remain very audible. 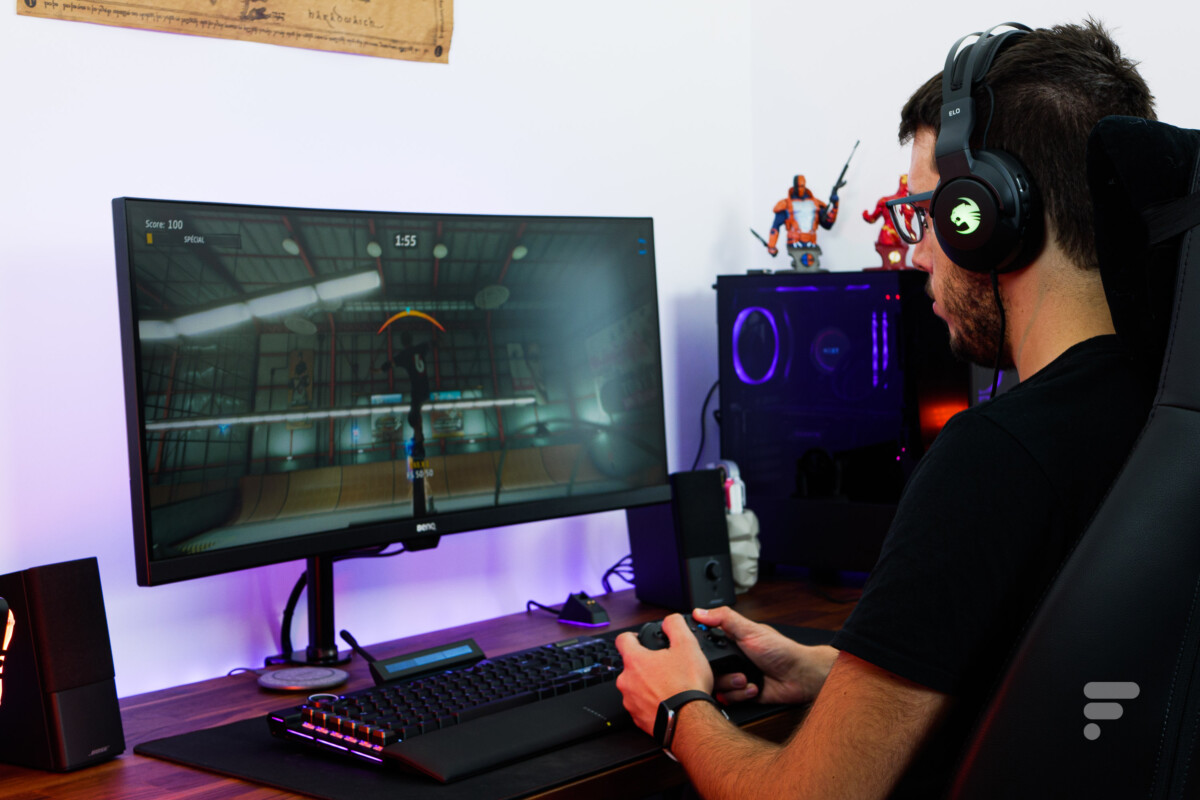 The supplied microphone is also convincing with a sound finally quite clear which does not distort or stifle the voice too much. The rendering remains natural and much better than many other competing headsets. On the other hand, we remain quite skeptical about the noise reduction proposed in the pilot, which does not seem very effective, or even totally useless. Note also that the microphone remains sensitive to the effects of breath and that it will therefore have to be placed correctly.

The first two sound clips were made without noise reduction. The next two were captured with noise reduction enabled within the Swarm Pilot. The latter is therefore much less effective than that offered by Asus on the Strix Go 2.4.

Price and availability of the Roccat Elo 7.1 USB headset

The Roccat Elo 7.1 helmet is available at the suggested price of 69.99 euros.