This content is offered by Samsung and produced by Humanoid xp

It is really not easy to take a picture of your pet. He moves all the time and never wants to strike the right pose in front of the camera. Fortunately, there are tips to know to better capture the moment.

Anyone who has ever tried to photograph an (active) cat knows that the task can be very difficult. Your feline friend is looking at you lovingly, with his paws crossed and his tail hanging over the edge of the table. His posture is perfect and his coat makes him one of the most beautiful cats in the world. It’s obvious: the world needs to see this, the world needs to appreciate your cat as much as you do. This moment should definitely be shared on Facebook and Instagram – maybe even Twitter.

« Not moving “, The moment you’ve found your smartphone to capture that perfect moment, everything goes wrong. Maybe your cat is cleaning herself up and has put on an obnoxious posture. Or he moved in such a way that his face – now stupid – darkened. But after all, maybe this bad luck is just some coincidence. Still: it happens every time you try to take a picture of it.

Then you think it’s basically impossible to take a decent photo of your cat or dog. Think again. Dogs, cats, rabbits and even guinea pigs: here are some tips you can follow on your next attempt to immortalize them.

Get them used to it!

Dogs and cats aren’t concerned about the beauty of your photos. They just want to be comfortable with you. Our first tip to ease your pets’ nervousness is to start taking pictures of them early, if possible from a young age. Let your dog (or cat) sniff your smartphone, and reward them for approaching it. 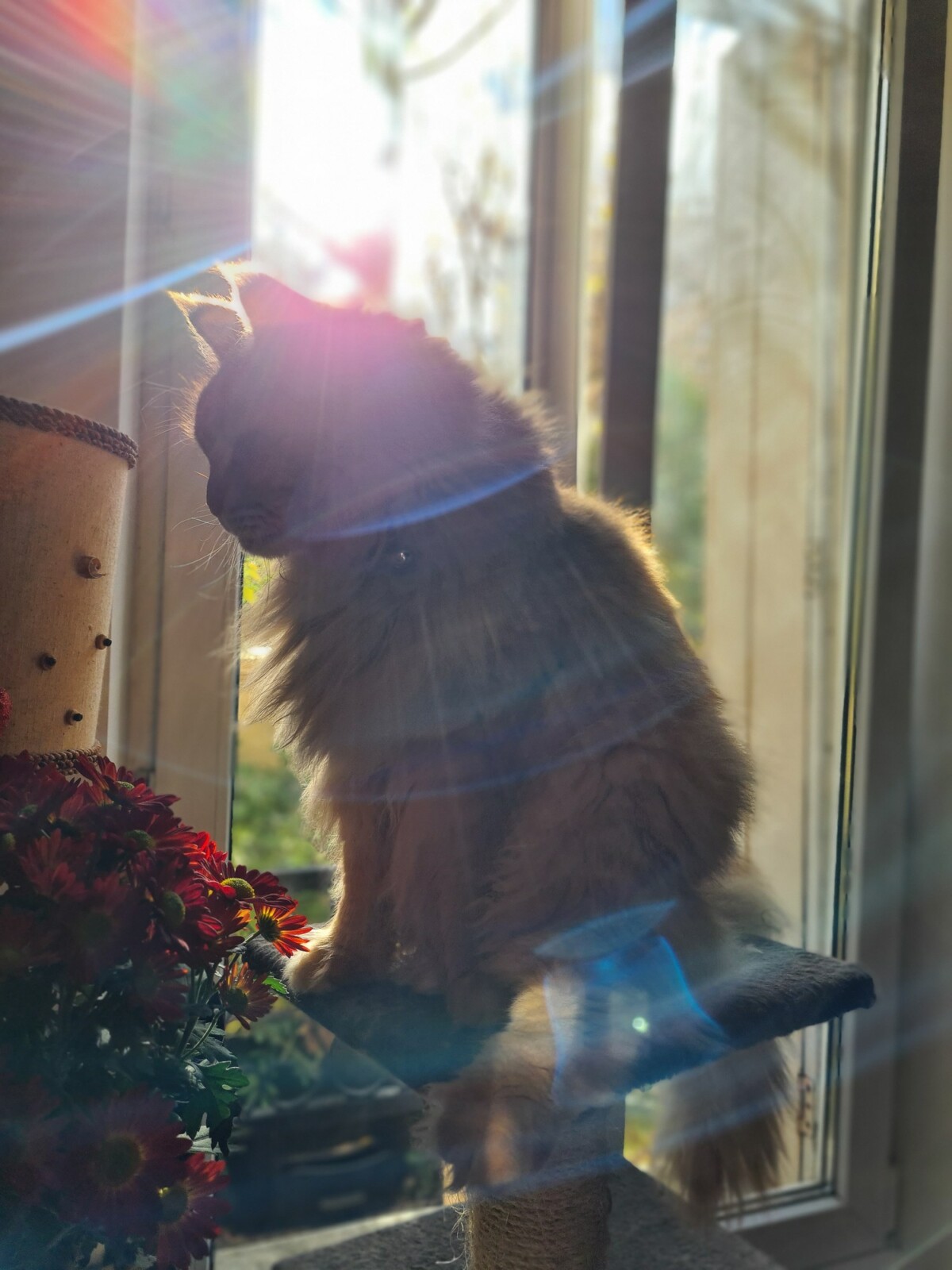 Get your animals used to having a smartphone. They will then be calmer and allow you to better work your frame.

Maintain his personal space and give him a break if he seems nervous or uncomfortable. It’s also important to keep in mind the tone and body language you use when training your dog or cat to feel comfortable using your smartphone.

Using a calm tone of voice shows your dog that you are not stressed and that everything is fine. Animals are extremely sensitive to different types of body language. If you’re uncomfortable, so will they.

Our advice: tire them out before taking a picture. Make them run. The key is to bring the animal to a level of fatigue where it doesn’t really care what is going on around it anymore. Keep in mind that this also depends on the age of the animal you are working with. It’s easier with a puppy or a kitten… but on the other hand, you have to be faster!

This is basic advice, but it is essential to capture a precious moment. This is quick access to your smartphone’s camera. All smartphones have this quick access feature. On the Samsung Galaxy, just double tap the unlock button, the camera will open in less than a second. 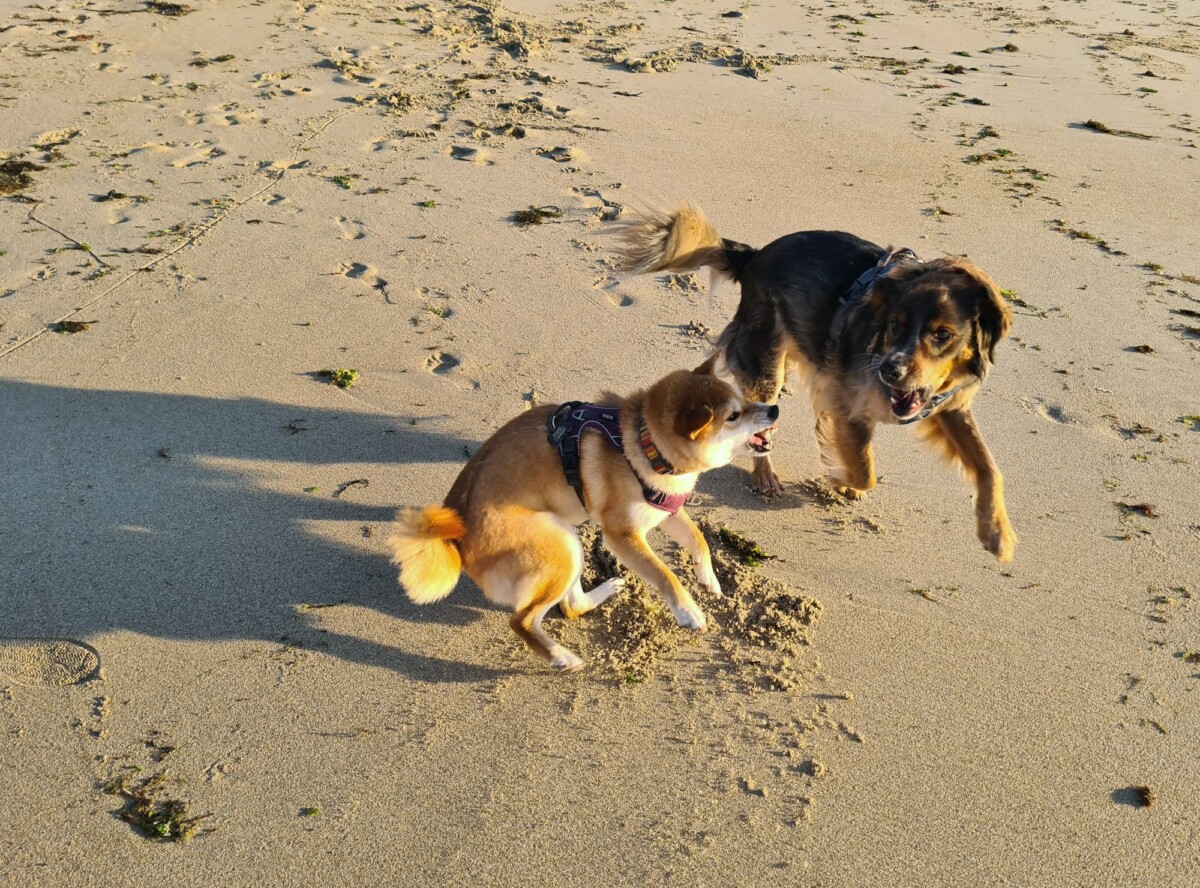 Burst mode allows you to take pictures in the moment. And make your dogs fly for the duration of a snapshot.

Besides, burst mode will certainly be your best ally. When should I use it? You could tell as soon as the subject’s movement is too fast for your eye. But if you constantly use burst mode, you won’t learn to “see” the right time.

On the Galaxy S20, you must activate the burst mode: on the preview screen, tap the “Settings” icon, press the “Hold Camera key for” button and select “Take a burst”. How to use it ? By holding down the camera button while taking a picture. 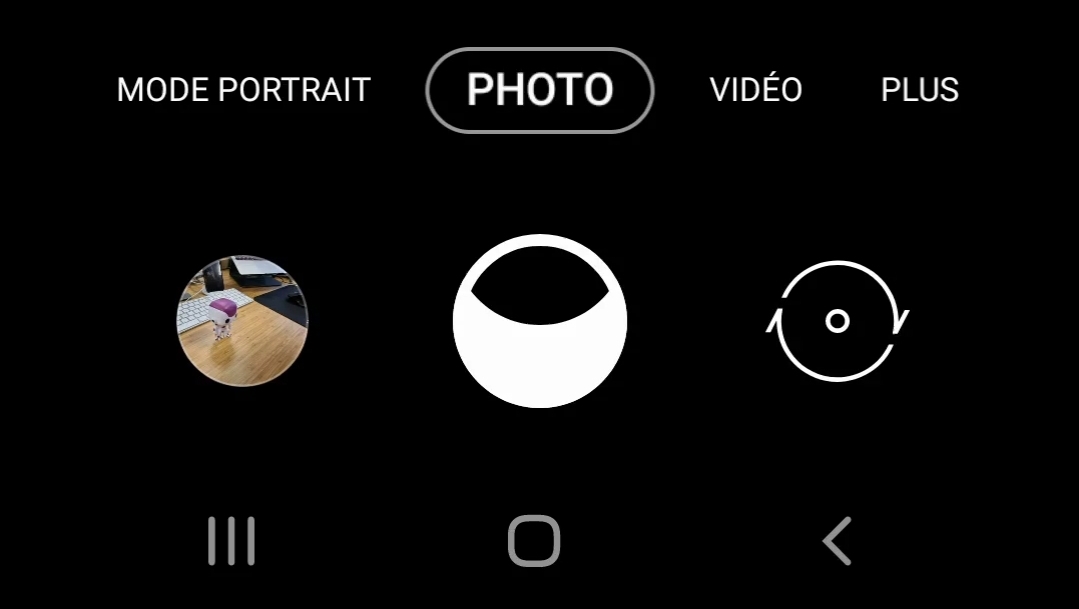 Attract the attention of your animals by playing on their curiosity. Cats, for example, have different characters and traits; they all react differently to similar situations. But one thing they do have in common is their natural curiosity. Use it – it’s one of the ways to get cats to go where you want to go and do what you want them to do. 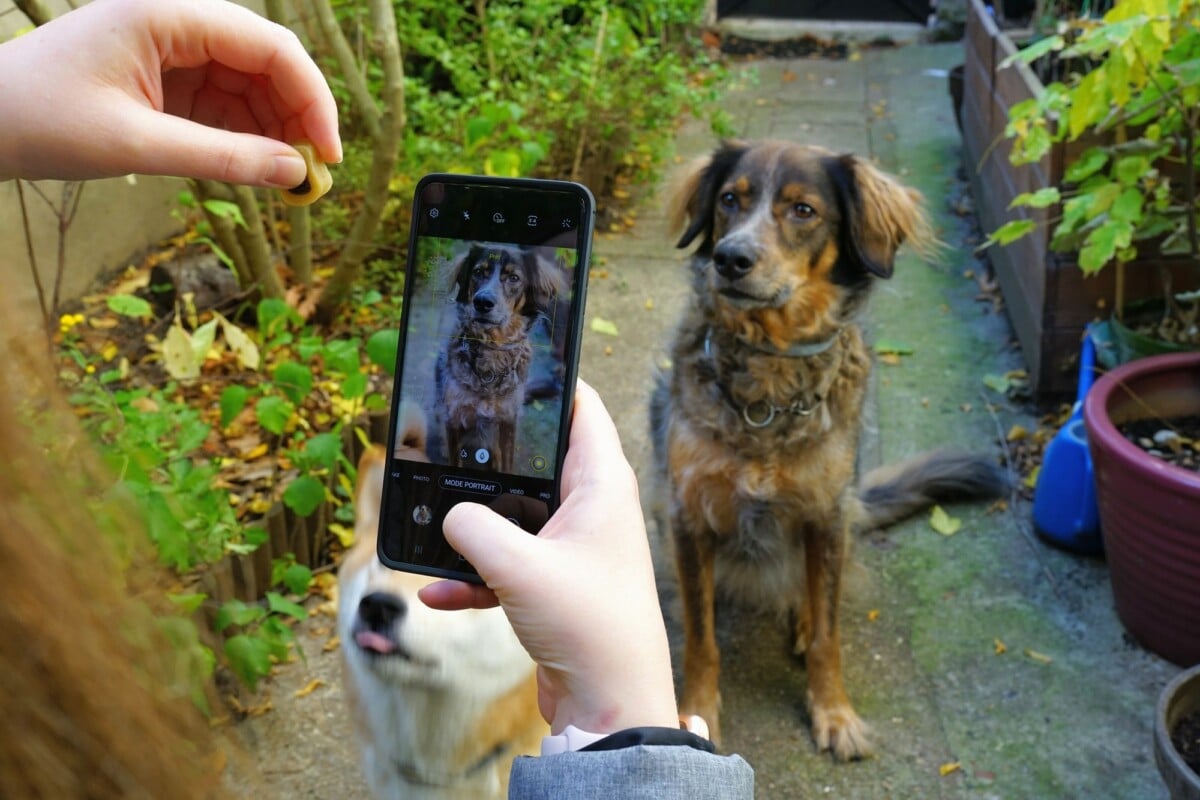 To direct the gaze of a dog, nothing could be simpler, place a treat in evidence near the smartphone. You will then have his full attention.

Snapping your fingers, rustling paper or dry leaves, or throwing small pebbles or paper balls are all great ways to get their attention. Throw the objects in the direction you want the cats to point, and their curiosity will do the rest. The cats will go check out what’s there, then just use the rustle of paper to spin the cats towards you.

For dogs, it is much simpler, it is – often – enough to have a ball (tennis handy) or a treat. Place it on top of your smartphone or in a specific direction to direct your dog’s gaze.

Focus on their eyes and use portrait mode

Always aim for the eyes. The eyes or the gaze (whether for an animal like a human) tend to be the first thing we focus on in an image. It is therefore very important to have clear eyes. Focus on the eyes every time, when they are visible through the viewfinder… the screen of your smartphone. Place the focus on it by tapping on your smartphone screen. 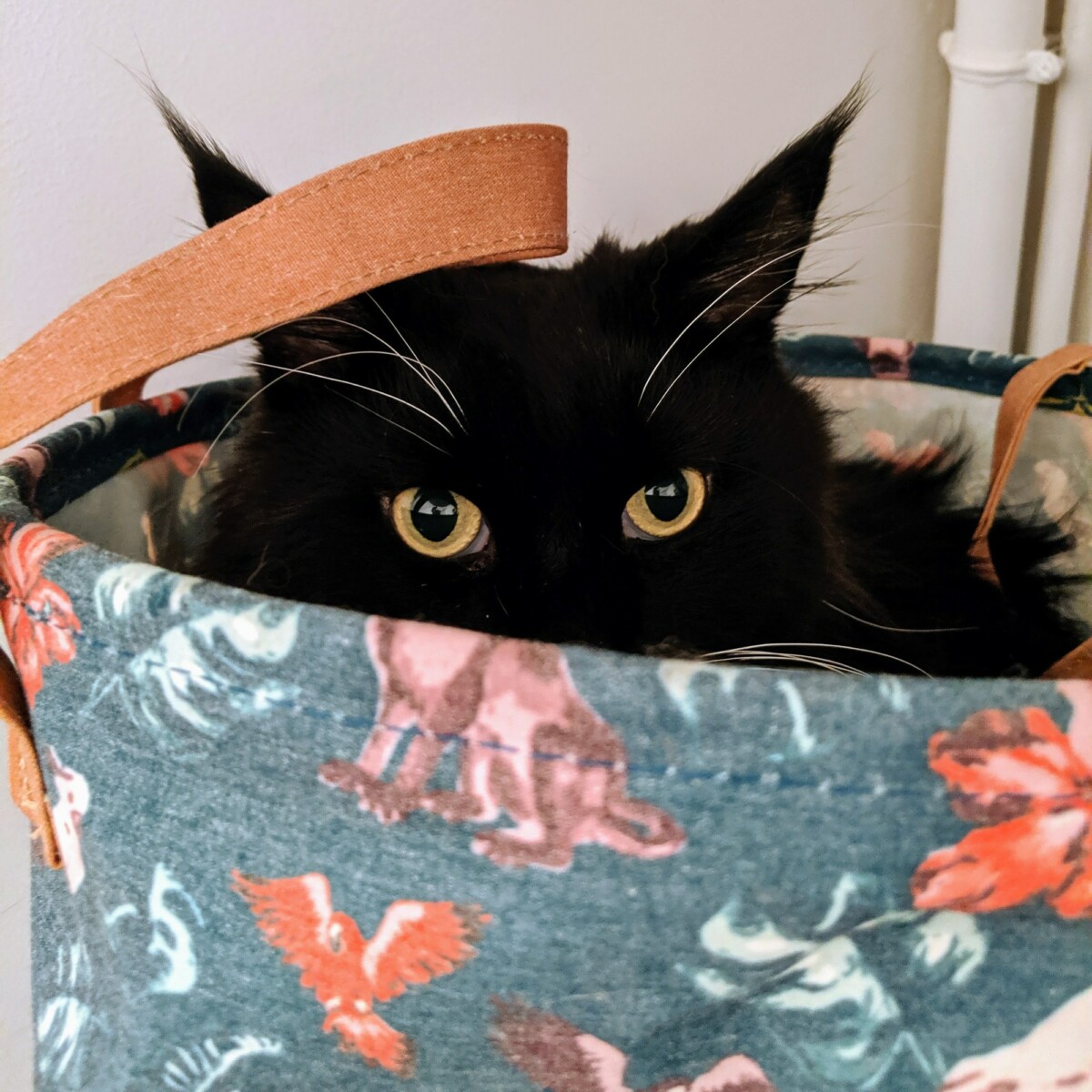 As with humans, the gaze is essential in the photo of an animal.

Portrait mode isn’t just designed for taking portrait photos… of humans. Cats and dogs photographed against a bokeh background are often successful. Take the opportunity to frame your subject. Use the surroundings to create a nice frame around your pet. It will add more depth to your photo.

Feel free to bend down, crouch and move

Photograph them from a point of view at their height. Show what life is like from their perspective and perspective. With this point of view, you will be able to capture the cat in the position of a real hunter and you as a prey. 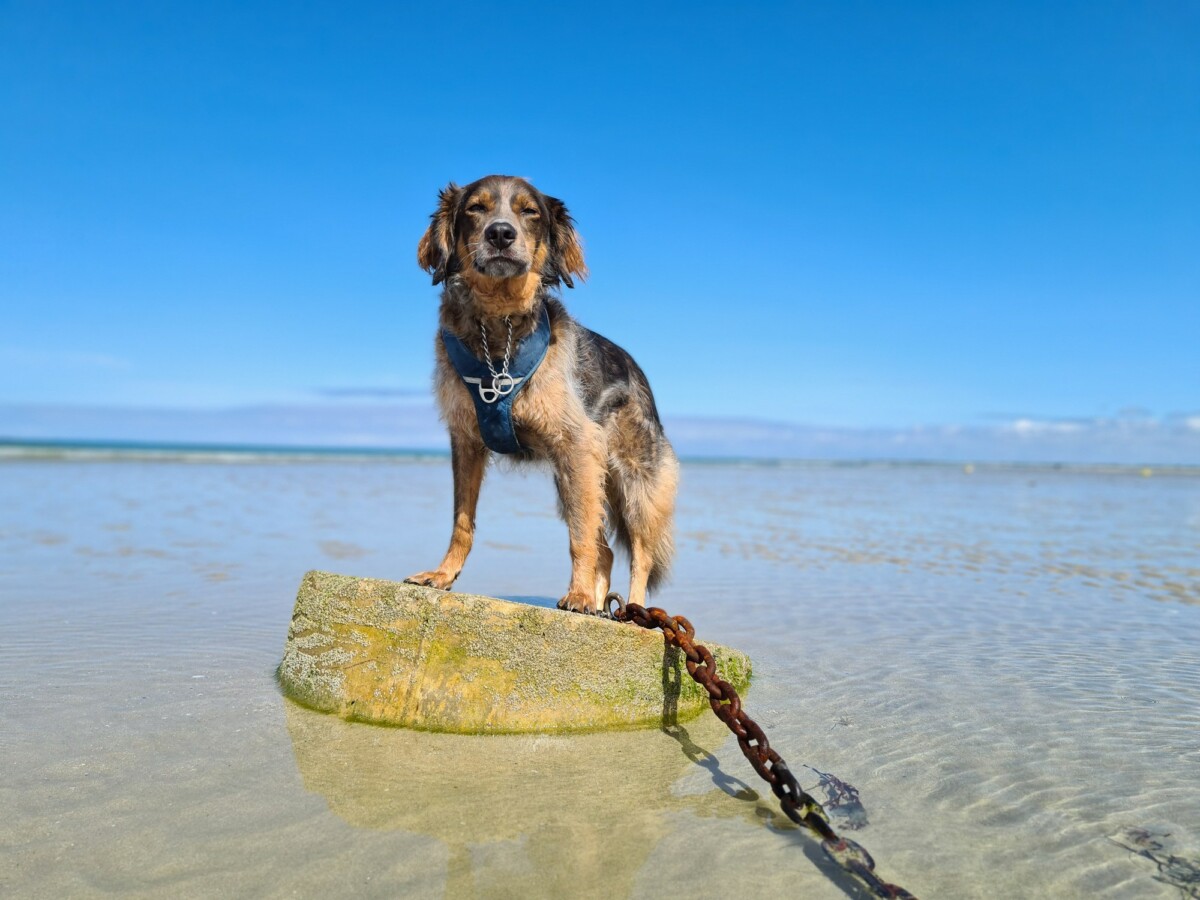 Lower yourself to be up to your animals. It’s also a way to show what life looks like from their perspective.

Try to capture your dog from different and unique angles. Make each photo different from the last. Capture their spontaneity: get ready to slip into weird places, roll on the grass, climb trees, and hide between two bushes. Unlike a human, your pet will never judge you for trying to surprise or innovate in photos.

No flash, no noise

Using a flash often distracts animals and sometimes scares them. If you’re using flash (and you shouldn’t), turn it off. 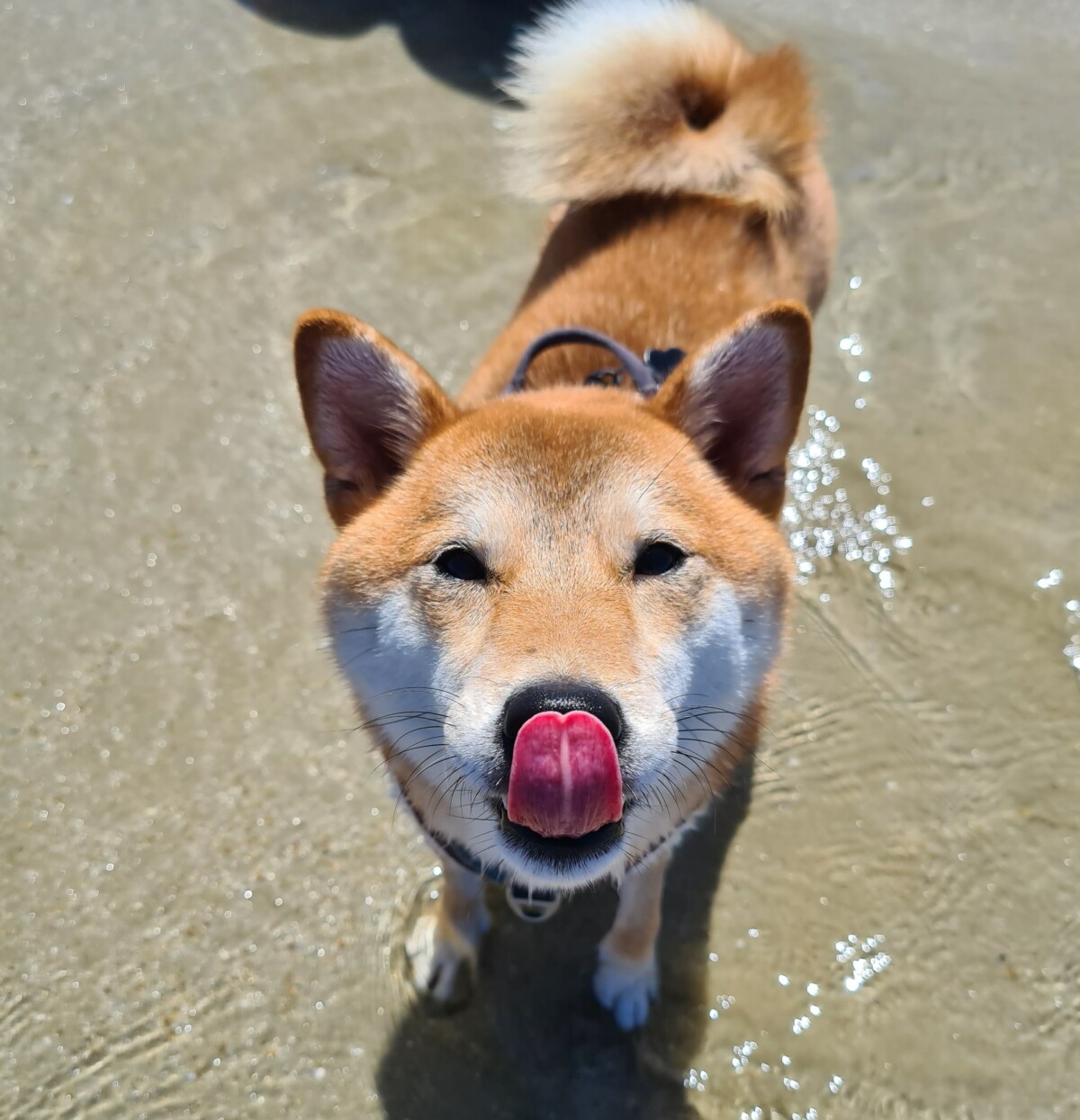 Capturing the spontaneity of an animal is harder than it looks. When you have succeeded, they will have accepted your camera!

Same story for the trigger noises of your smartphone. To capture moments of sleep, for example, don’t make noise. So be silent, don’t make sudden movements.